When we woke up on the Sunday morning in Sannox we knew we had to make a decision – would we stay in Arran and hope for some better weather for more mountain walks, or would we move on?

We took a final check of the weather forecast and couldn’t see any pleasurable mountain walking in it, so decided to go and get the ferry from Lochranza to Kintyre. The ferry wasn’t running that morning due to the rain and wind but there was a chance it might run later in the day so we thought we would go over to Lochranza and see what happened. The ferry can’t be booked in advance, you have to turn up and get in the queue. We felt lucky that we had the luxury of flexibility, anyone who was heading home, to a job or to pre booked accommodation could have been anxious, but for us it was just a small delay.

While parked near Sannox that morning a lady stopped her car and came and tapped on our door. I was in rather an embarrassing position on hands and knees using the crevice tool (vacuuming of course). She wanted to tell us that we would be moved on as we were parked in a turning area for council vehicles. I didn’t really know whether she thought she was being helpful or was just a NIMBY (although the passive aggressive part of me would point out that it was a Sunday, a designated picnic spot and the council vehicles would surely use the next spot up where the recycling dumpsters were located). She was perfectly polite and in return I thanked her for the info but didn’t admit that we had already stayed the night and would be moving on anyway.

When Bertie was clean and tidy we moved to Lochranza. CalMac (the biggest Scottish Ferry operator) who operate the Lochranza to Claonaig ferry had promised an update at 12:30 so we thought we’d get there shortly beforehand. 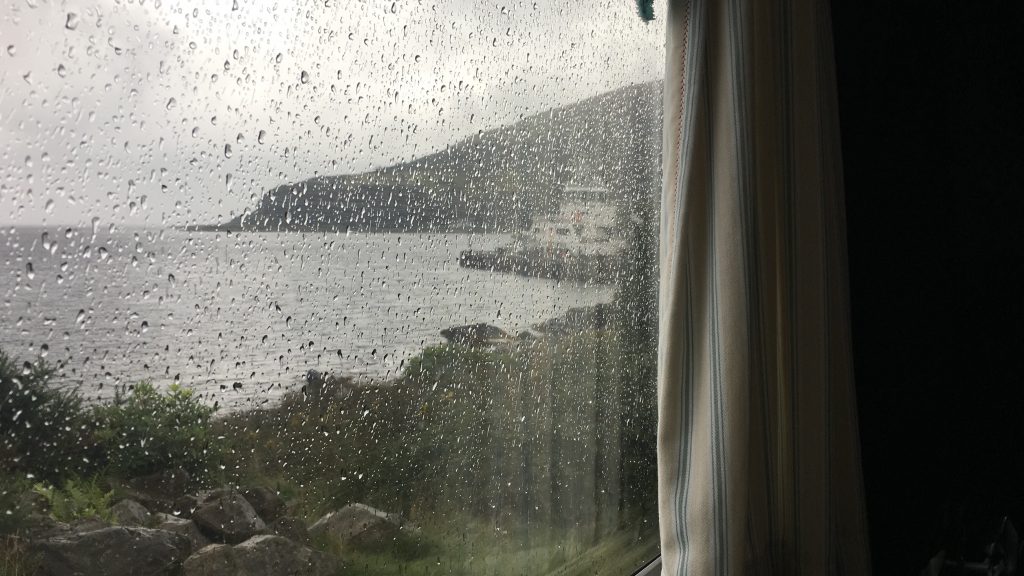 Watching the ferry through the rain at Lochranza

The Lochranza ferry port/terminal (both of which are too grand a term) has a waiting area with numbered spaces for people who want to catch the Ferry; this was full, but we also knew that there were a couple of big parking areas just up the rise, so we went up there to keep an eye on events. People turned up and either waited in the car park or drove off. One motorhome tried to extend the queue onto the road and became a blockage as the local bus service tried to get through, they revised their approach.

At 12:30 there was an update that the next ferry would leave in a couple of hours but would take the longer route, normally operated in winter, to Tarbert. On looking at the queue we felt there were people probably in much more of a hurry than us so we wouldn’t bother with that one.

With at least couple of hours to spare I decided to try out some more baking in the oven. I had bought a six muffin tray before we set off that would fit into our little oven so I made cupcakes. The cakes were a success despite the low temperature of the oven. The icing (since when did we start calling it frosting? – I blame the Bake Off) was not such a success and needs more work. I refuse to allow icing sugar in the van due to the way it floats and coats everything, so I need a good chocolate fudge topping that doesn’t use it. 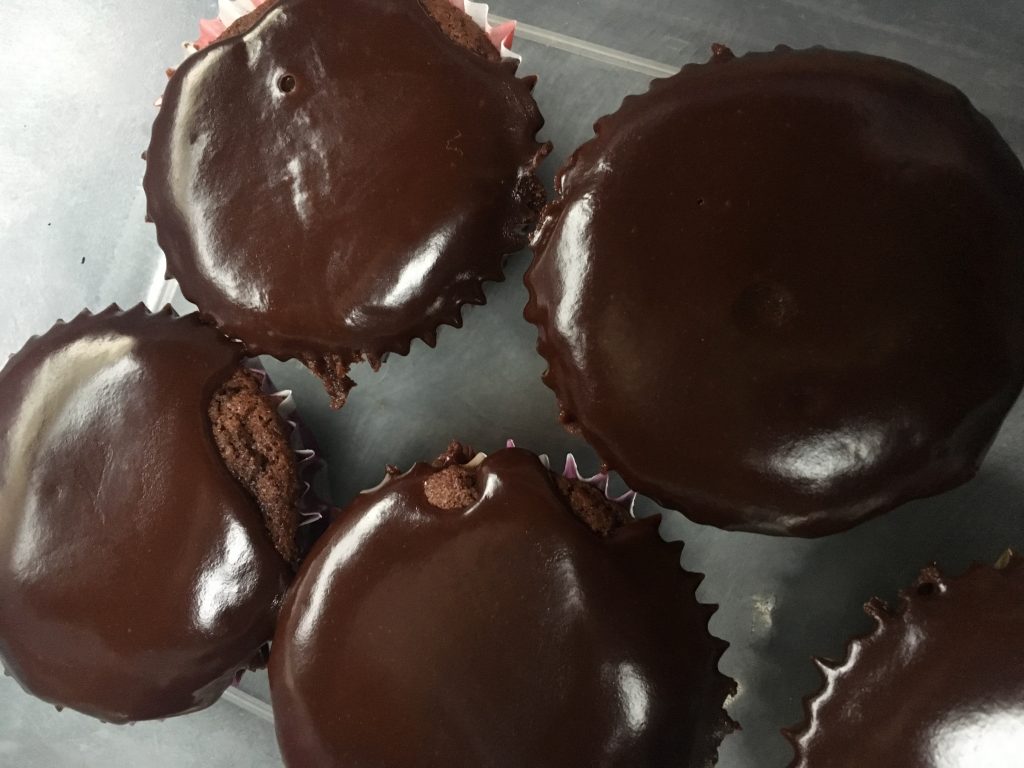 We watched the ferry get loaded up and make it’s way off to Tarbert. At Lochranza you would be excused for thinking this was all a fuss about nothing, the loch was as flat as a pancake, but the strong winds were – unusually – coming from the South East and causing issues at Claonaig. A while later there was an announcement that the wind had dropped enough for the final ferry of the day to go to Claonaig, but we had settled down by then so decided to spend the night at the Lochranza and get the morning ferry.

Staying was a good move, there were public toilets so we didn’t need to use our loo, and there was a water tap on the front of the toilets which we used to top up our tank by shuttling a few 5 litre water containers back and forth over the road. This left us set up for a couple of nights wild camping on Kintyre before we would need to find a campsite.

2 thoughts on “(Not) Leaving Lochranza”