We didn’t get the first ferry from Lochranza, we left it till 10ish to get in the queue. Although we were second in the queue we were waved on first and had pole position on the ferry, right in front of the doors. Our prime position proved interesting as we approached the terminal at Claonaig, we’ve never really watched what happens as the ferry approaches the slipway before. The ferry doors were dropped slightly (as always seems to happen on approach to the terminal) I assume this is partially to act as a sea brake and partially to prepare for dropping the front door completely onto the slipway for disembarkation. With the door partially lowered there was a gap of a couple of feet between the sides of the ferry and the doors and the waves were sloshing around the edges. I can see why the ferry was cancelled the previous day. 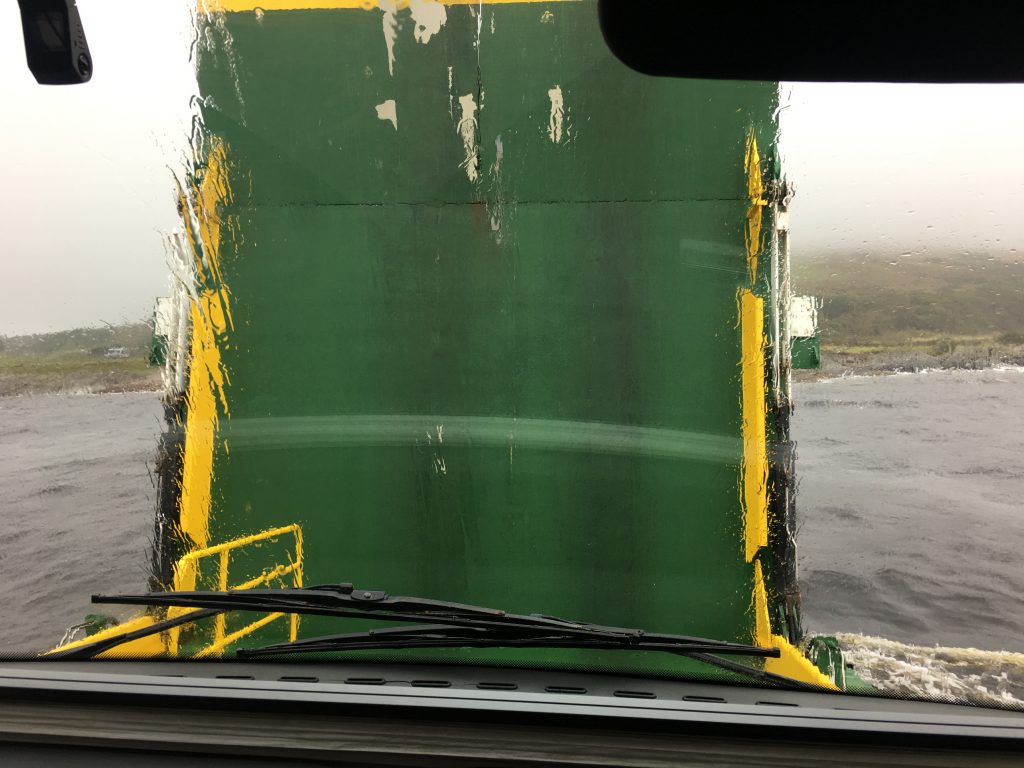 Watching the ferry doors drop…and trusting in the handbrake

The tide was relatively high as we left the ferry which allowed the ferry to dock further up the slipway and avoided the risk of grounding due to steep an angle of entry/exit. Something to remember for future ferry crossings especially to smaller ports.

We’d had a lovely time in Arran, we had been very fortunate with the weather until our last day and there had been lots of things to see and do, plus the facilities made it easy for motorhoming. Even the roads were mostly two lanes rather than the highland single track roads. 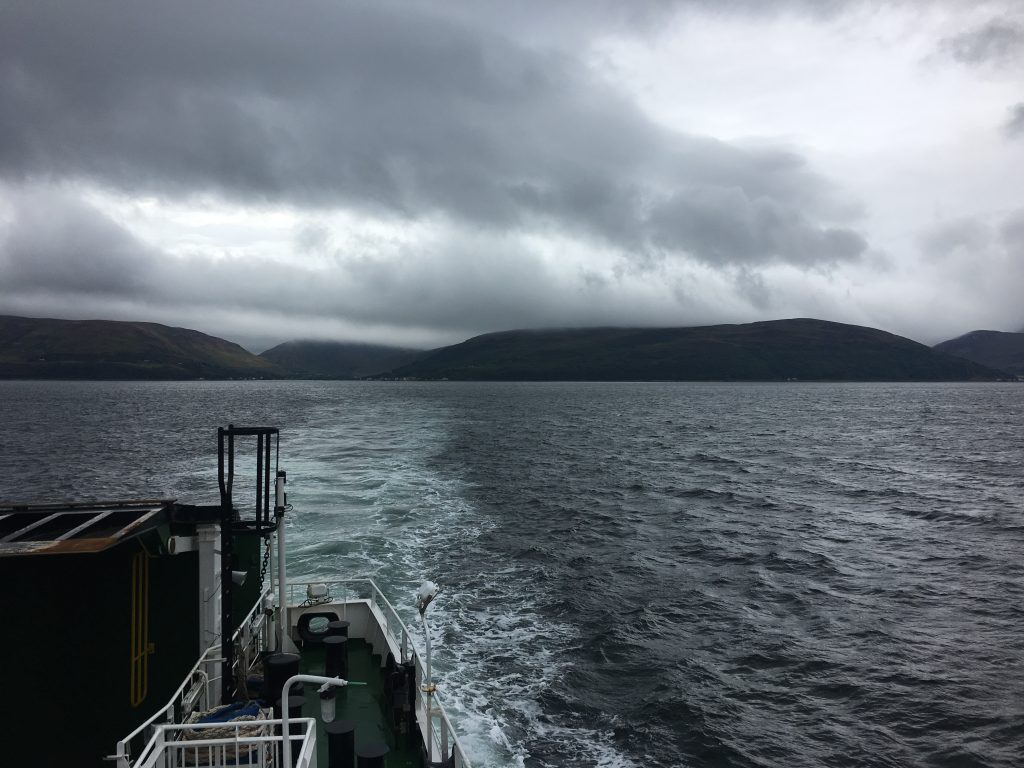 Now we were heading for the Kintyre peninsular – if you’ve looked at this on the map you may have been struck, like me, with it’s similarity to a part of the male anatomy. No? It’s just me then.

The weather was still pretty wet but we had already decided that we would make the most of the bad weather by having a seafood lunch at Skipness Seafood Cabin, which is conveniently just up the road from the ferry terminal. The plan was to find an overnight spot near Skipness and then walk to the Seafood Cabin but the parking spots were either taken or too boggy to risk, so we drove all the way to the Seafood Cabin instead. We were a bit early for lunch so we donned all of our waterproof gear and went for a look around Skipness Castle, this was our favourite castle so far with an intanct tower which allowed us to climb to the roof and see the views of the surrounding area. 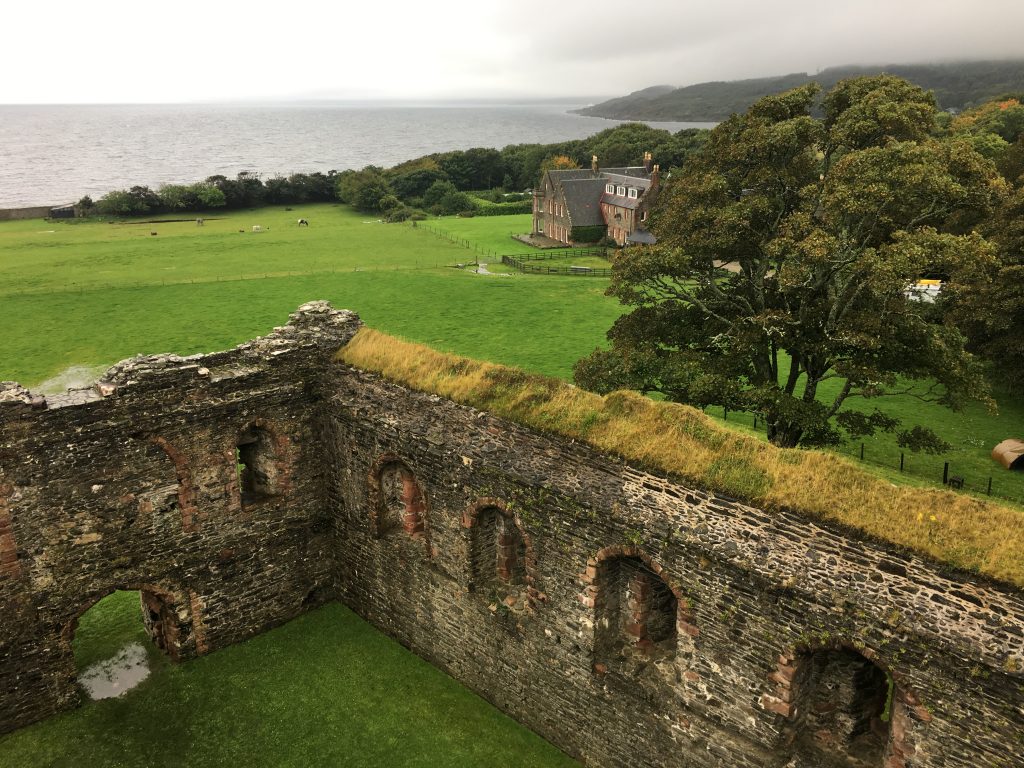 Finally we felt we could reasonably order some lunch – and the rain had eased. We had a seafood platter for two and I had a rare lunchtime glass of wine; lunchtime drinking makes me so sleepy. It was very good – I particularly liked the scallops with pesto and the hot smoked salmon. We even sat outside (under shelter).
We looked at the map over lunch and worked out a few possible parking spots we could head to for the night. First we stopped at Grogtown, this was where we saw another otter ducking and diving amongst the seaweed. We whiled away half an hour or so until the otter disappeared, but we decided not to stop there overnight as there wasn’t anything we wanted to do in that area the following day. A bit further on we stopped at Torrisdale overlooking the bay. This was ideal as we could have a walk around the coast to Carradale the next day. 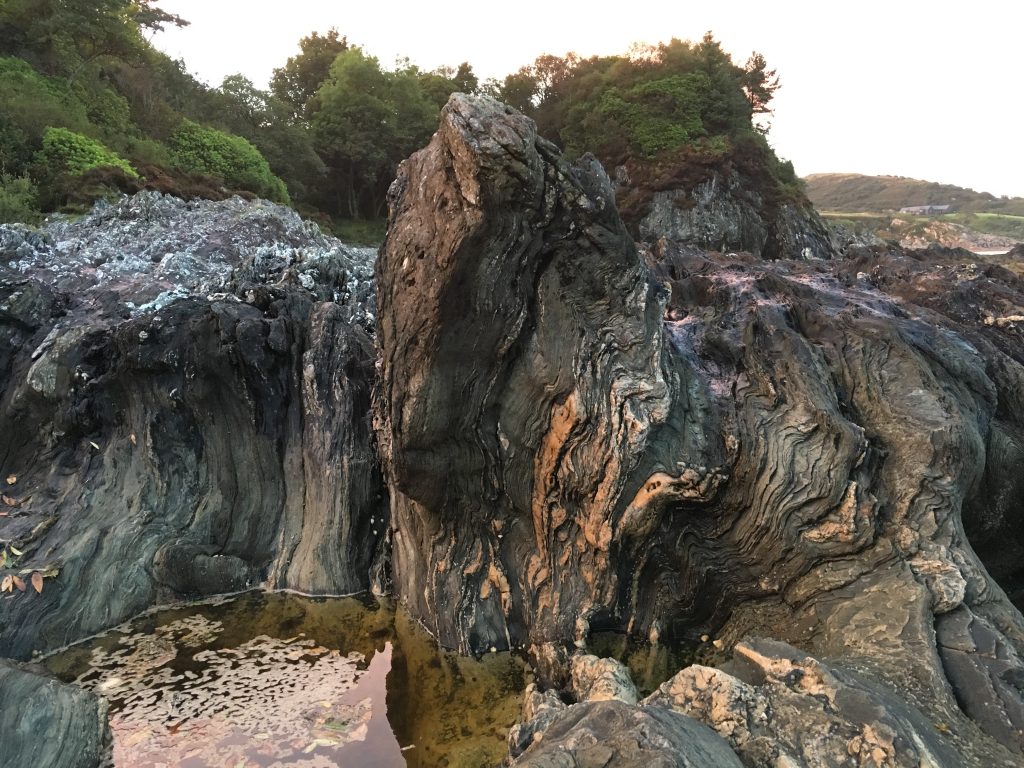 Interesting schist rock forms on the beach at Torrisdale

That evening as we were making our dinner the weather started to improve, rain stopped and clouds lifted. The skies turned an improbable set of pastel colours as the sun set over the hill behind us. Beautiful. 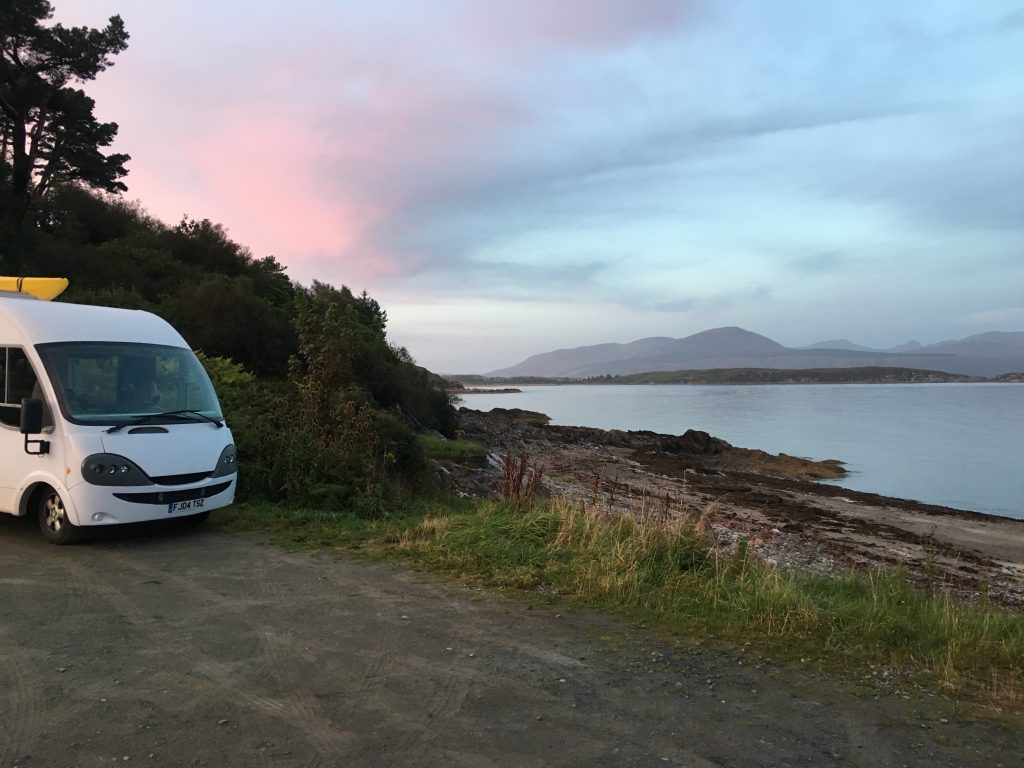 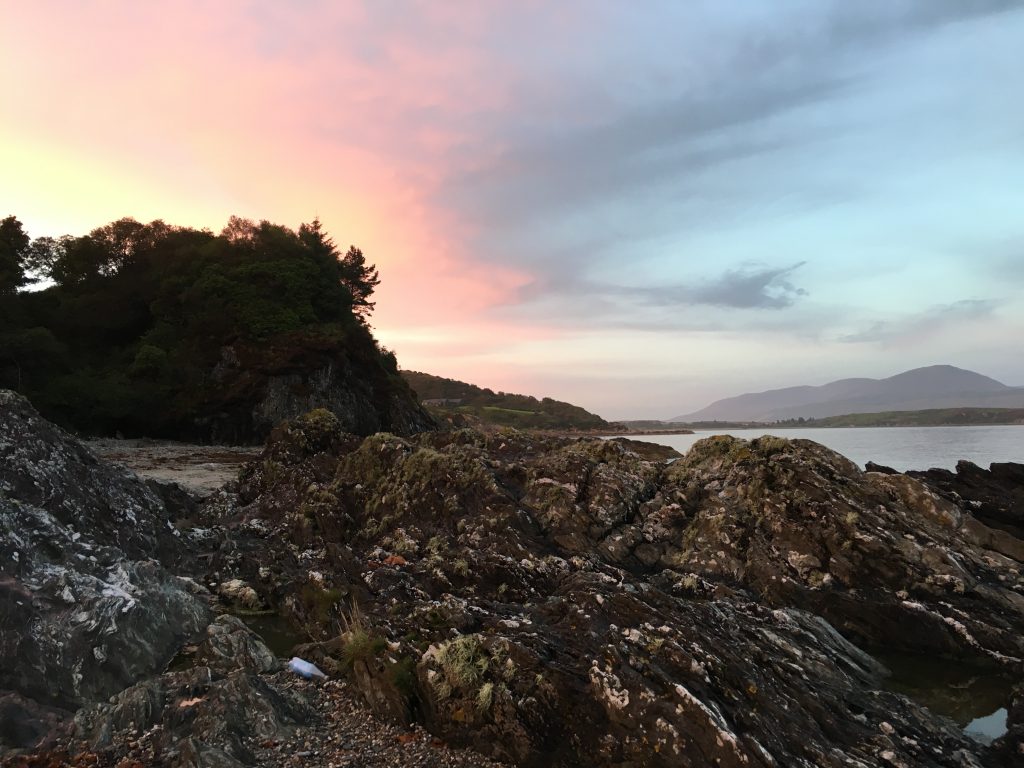