The next day we thought we would go for a bike ride, there is a scenic trail of just under 40 miles around the Galloway forest which we fancied doing. However when we woke up it was raining and the forecast had worsened from drizzle to heavy rain all day. So it was a day for a lie in and not doing much. We did see two people on mountain bikes go past during the day – did we feel bad that we weren’t out there? Not for long!

The forecast for Saturday was still reasonable though and we were going to go for Merrick the next day come what may.

The rainy day meant we spent three nights on the trot at the same wild camping spot – not something I would normally do. The parking spot was quiet due to the weather but still saw a steady stream of people arriving, dashing up to Bruce’s stone and then leaving again.

We woke up on Saturday to a dry-ish morning, a few showers but nothing compared to the day before. The best chance for breaks in the cloud was in the afternoon so we decided to hold off starting our walk until late morning. The route up to Merrick is straightforward and signposted, a short stroll through deciduous woodland, then up through heather and bracken to a bothy I imagine is only used in dire emergency (by the looks of it’s interior), then through forest and finally across moorland. The rocks and trees on the lower part of the walk were veiled with moss and the streams were turbulent with water. The excess run-off from the previous day’s heavy rain was using the path as the route of least resistance downhill. It made it difficult to work out what was stream and what was path at some points. 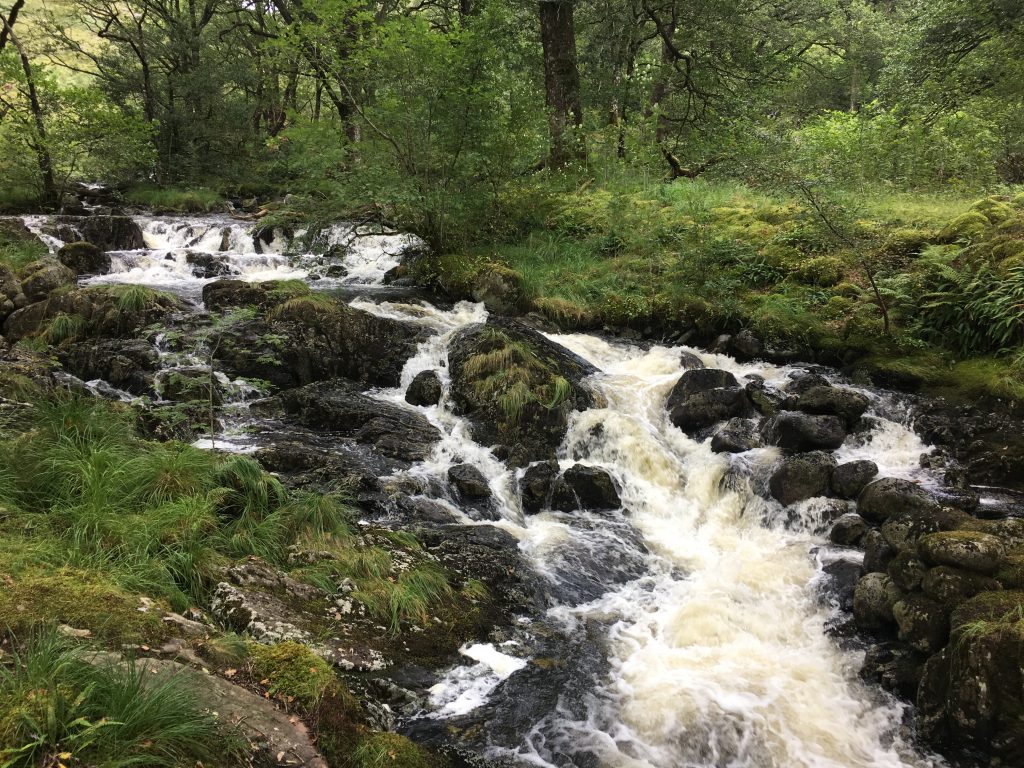 Streams and lots of moss

When we reached moorland we were in the clouds and disappointingly they didn’t lift for us, we just had some patches that were lighter where we could make out the rough outline of the hills; that gives us an excuse to come back another time to see the views. At the top we had a decision to make, go back the way we had come (boring!) or take the alternative route through the valley of the lochs. We had been warned that it would be boggy, we chose to ignore that warning.

Despite the bogginess it was a beautiful walk, initially pathless we enjoyed finding a route from the summit down to Lock Enoch avoiding slippery rocks, boggy puddles and short but steep drops. We then followed a series of lochs and their outflows until we reached Gairland burn tumbling vigorously down into the valley. 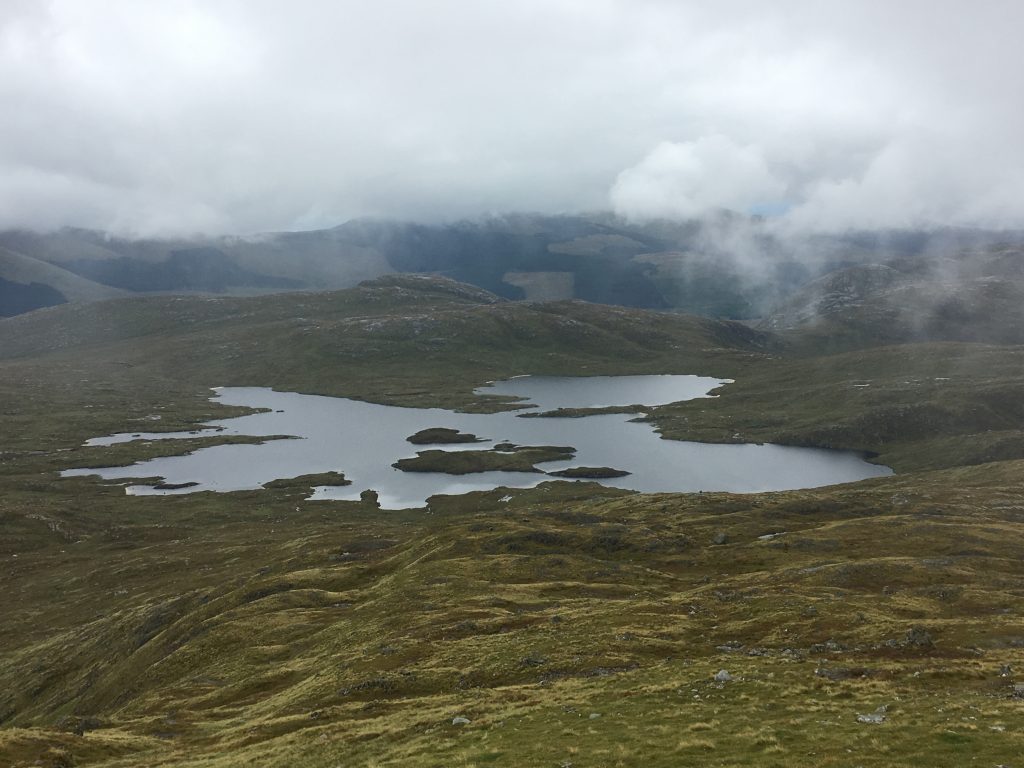 The interesting outline of Loch Enoch

From Loch Enoch there was a path, but the path was off-the-scale boggy, there were alternative paths but you had to be very wary of the ankle snapping holes where streams had carved deep tracks through the peat, or treacherous rocks camouflaged and lubricated by mud. It took a lot of attention and concentration to get down in one piece and by the time we were down we had both slipped over a couple of times and could feel our joints straining from having been stretched in every conceivable direction as our feet slid in the mud. 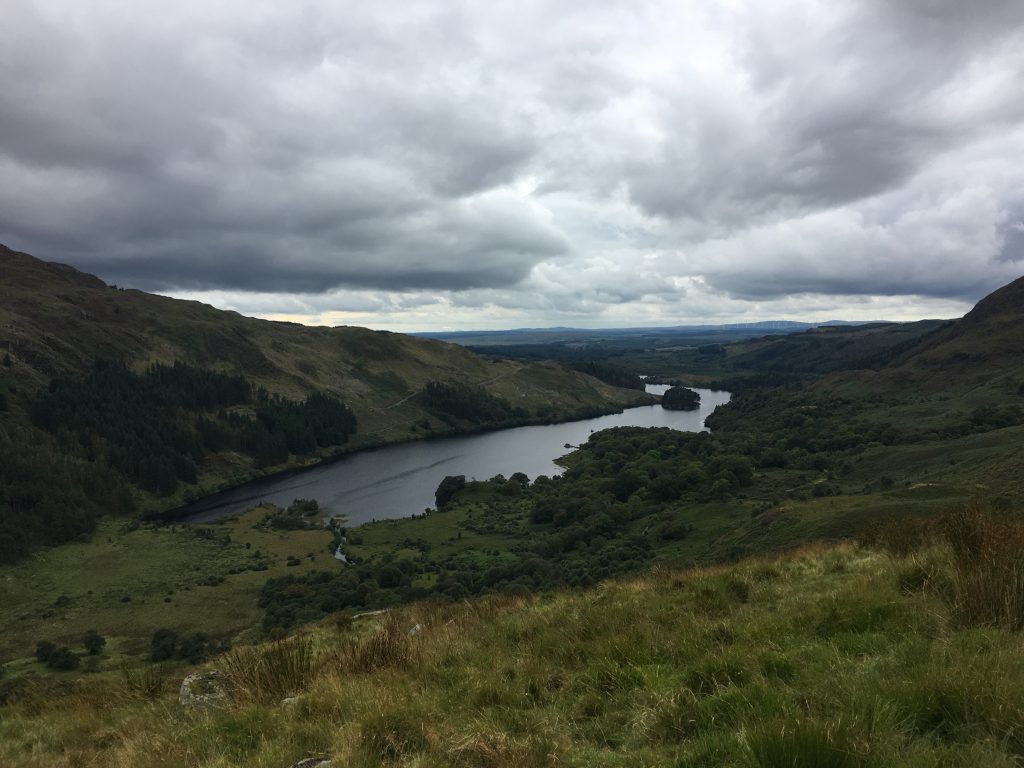 That evening we ate fatty carbohydrate filled foods (cheesy potato wedges – mmm) and watched some downloaded TV (Only Connect with the brilliant Victoria Coren-Mitchell) and then we both slept soundly.