Because of my usual tardiness in posting the blog I have decided to label each post with the date(s) it pertains to. That way you, the reader, and I, the forgetful and occasionally off-grid author, have a point of reference.

Still heading west we moved onto the Isle of Whithorn, not an island any more but a peninsular linked to the mainland by a causway. On the way we passed through the Galloway countryside with it’s lush green forests, equally verdant farmland and the many herds of cows that contribute to some of Galloway’s dairy products.
The parking spot just past the harbour on the Isle of Whithorn was more like a small informal campsite with people in caravans and tents as well as campervans and motorhomes. We parked with a view across the bay and harbour, very picturesque. 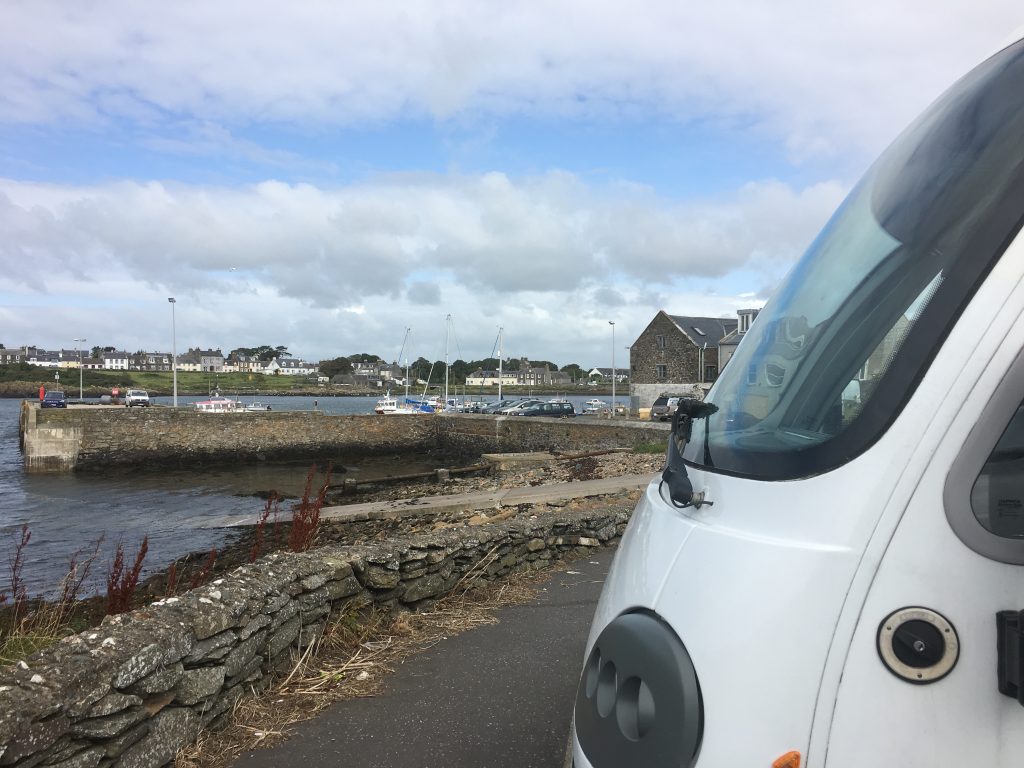 Bertie’s parking spot and view at the Isle of Whithorn

We set off on a walk towards St Ninian’s Cave. St Ninian was a pictish saint who was said to have introduced Christianity to the southwest of Scotland, and the Isle of Whithorn is a place of pilgrimage The remains of St Ninian’s chapel are on the headland and a cairn stones sits within the walls of the old lifeguard building, stones are placed by pilgrims (and others I expect) in remembrance of people and pets. The headland also has a lighthouse and the remains of an Iron Age fort. 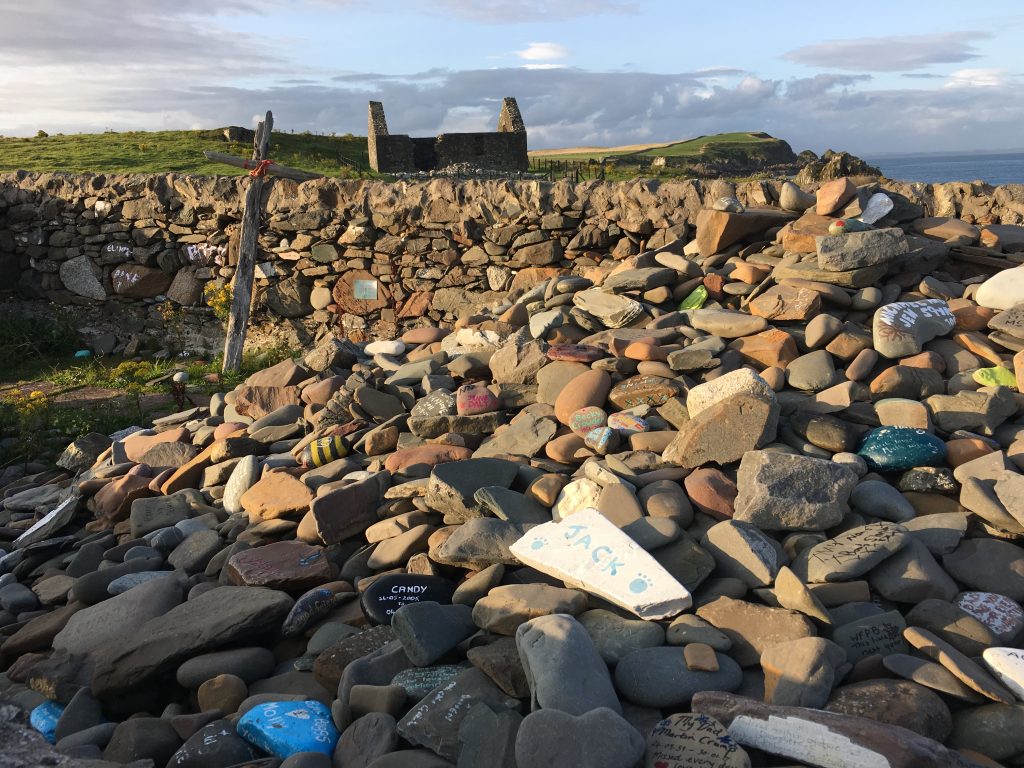 As we walked along the coast the wind was blowing strongly directly at us and we only managed to get as far as Burrow Head before it started to be too much for us and we turned around. So we didn’t get to St Ninian’s cave, but we did see plenty of interesting rock formations in the folded layers of rock along the coast. At Jamie’s Hole (I don’t know who Jamie was or why his hole was significant) we stopped to watch the seals that were beaching themselves in anticipation of the low tide. We have seen seals on the majority of our coastal walks but we never tire of them. 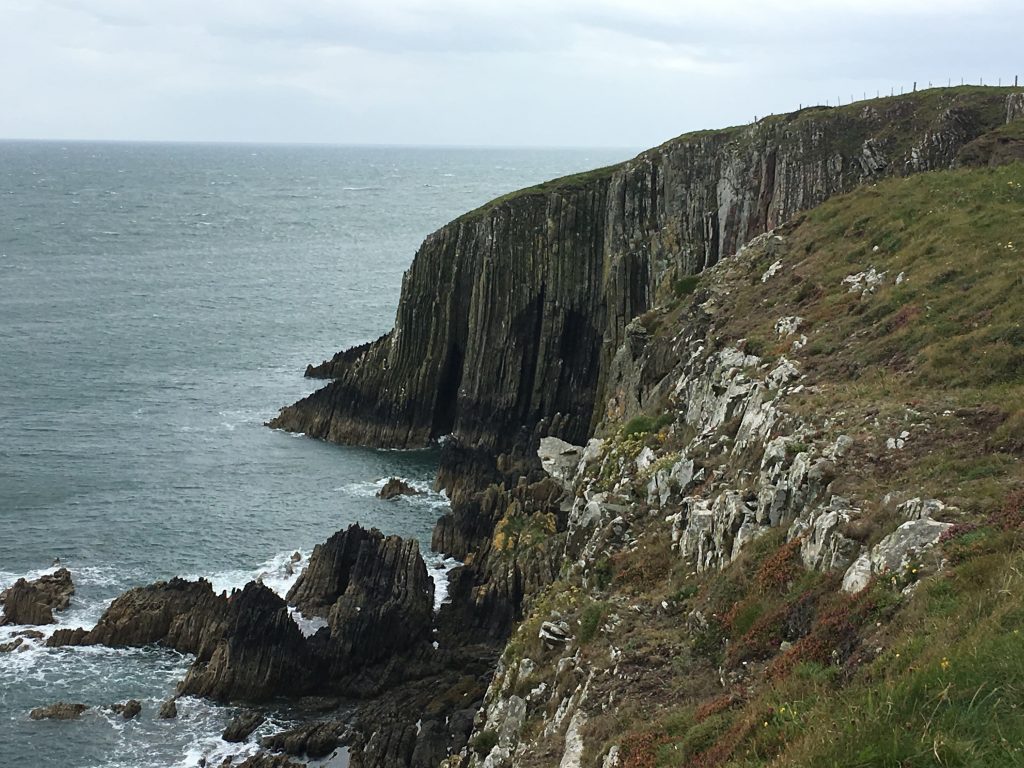 The wind didn’t show any sign of easing and that evening Paul did his good deed of the day by lending our windbreak to a group who were trying to BBQ, we were glad to be cooking in Bertie.

The following day we walked in the other direction and Paul took his fishing gear. The wind had abated and the hazy cloud was letting through plenty of sunlight and warmth. Paul fished while I clambered around the rocks looking for interesting things, I found some pellets, presumably regurgitated by a seabird (not as repellent as it sounds), and the remains of a couple of lobsters which may have been dinner for otters (lucky them). There were plenty of seabirds flying around and fishing boats out to sea. 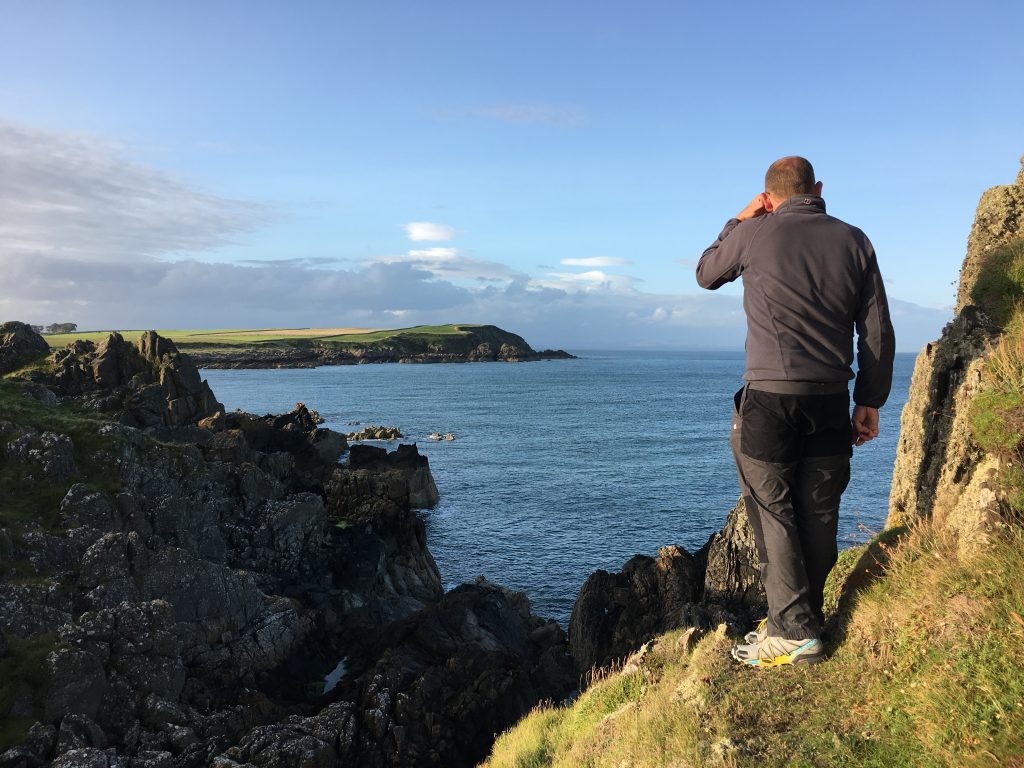 To the south we could see the silhouette of the Isle of Man (on the headland at the Isle of Whithorn there is a memorial to the crew of the Solway Harvester, a tragic loss of young lives in the Irish Sea), we could also see the northern fells of the lake district in the distance. 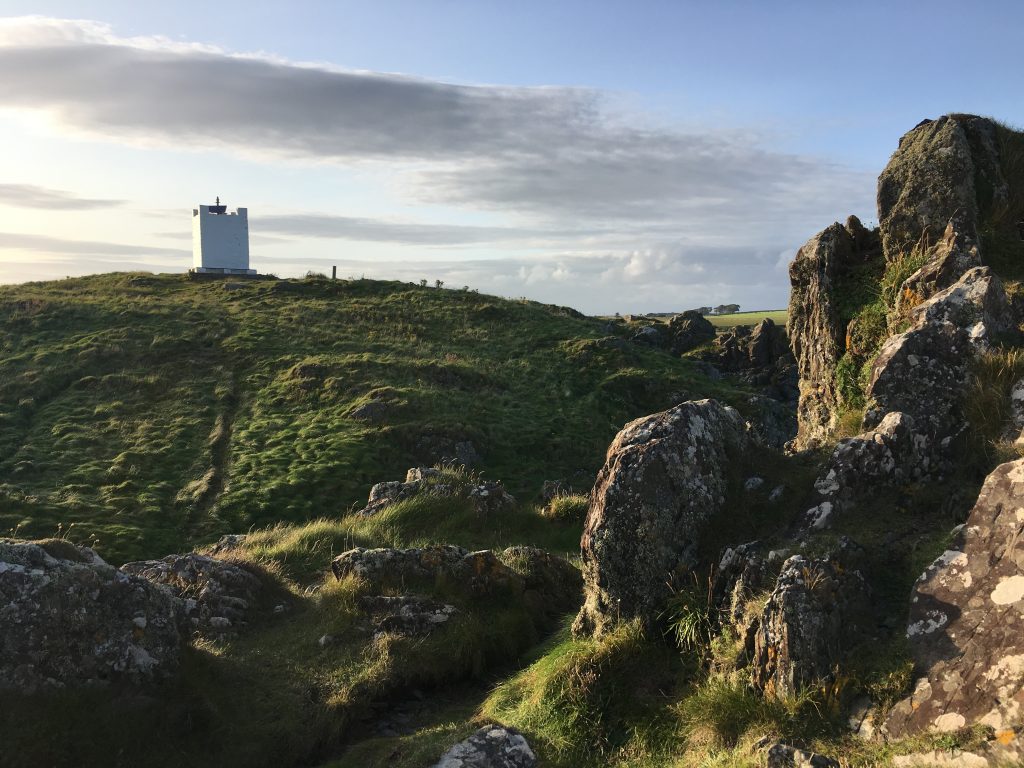 The lighthouse tower on the Isle of Whithorn

Paul’s fishing didn’t leave us with anything we could take home, pretty standard at the moment. The one mackerel he caught was thrown to a waiting seal who was very inquisitive, but also camera shy – every time I went to take a picture he dived underwater. Whether the seal found the mackerel or was even interested I don’t know.

That evening the car park was full, we wondered if there was something going on at the local pub, but it turned out that there was a church service taking place on the harbour along with a brass band. The minister had a strong voice which carried across to Bertie so we could hear his sermon as well as the hymns being sung.

We had a lovely couple of days at the Isle of Whithorn, I can imagine that it gets really busy on a sunny day so perhaps we were lucky that the weather wasn’t perfect.