The next day we moved on. It seemed that most people at Glencaple were breaking their journey to go further north, but we were heading west deeper into Dumfries and Galloway. It was a day of sunshine and showers, the type of day where everything is sparkling and jewel like, the sun tempts you out but the heavens could open any minute and drench you.

We stopped off at one of the 7 Stanes mountain biking centres for a little bit of a bike ride. There are (no surprise) 7 of these centres in the Southern Uplands, each managed by the forestry commission and each of them home to mountain bike trails. This time we did a short 9 mile blue circuit which had a few bits of fun single track but was mostly on the forestry commission trails. I’m in a position where I find the blue trails too easy and sometimes a bit boring, but parts of the red trails scare the bejesus out of me. So my choice of trail depends on how I feel, this time I felt a bit chicken so blue it was. Still, Paul managed to fall off his bike and sustain a knee injury as he raced around the trails. Paul tends to fall off quite often which is probably because he commits (i.e. goes too fast) more than I do. I don’t fall off, but I do end up in embarrassing situations where I’m astride my bike with both feet on the floor attempting to waddle down steep bits of track.

We were going to stay overnight here but they were preparing for an event the next day and it could have got a bit busy early in the morning, so after dinner we moved up the road to the Dalbeattie Town Wood parking area where we spent a quiet night.

We did take advantage of the facilities at the 7 Stanes car park before we moved though. We emptied our toilet cassette in the public toilets and used the tap to top up with some water.

Emptying the toilet cassette into a public toilet is usually frowned upon, not so much because it creates a mess (it’s quite easy to dispose of it without any trace if you have a steady hand), but because of the chemicals that are used by (probably) the majority of people to keep the smells at bay. These chemicals can cause issues by killing the necessary bacteria in septic tanks and sewage treatment works and so should only be disposed of at specific chemical waste disposal points. To avoid this restriction we don’t use any chemicals in the toilet. The down side of this is that we need to ensure we empty it frequently to avoid nasty niffs. And we also feel that we need to be surreptitious when disposing of our waste in case anyone does think we’re chucking any of those chemicals away. So our toilet disposal is often a bit of a clandestine operation, this time I made a furtive dash for the loos while Paul kept a look out for anyone arriving. Of course we always make sure the toilets are as clean after we leave as they were when we went in – sometimes cleaner! 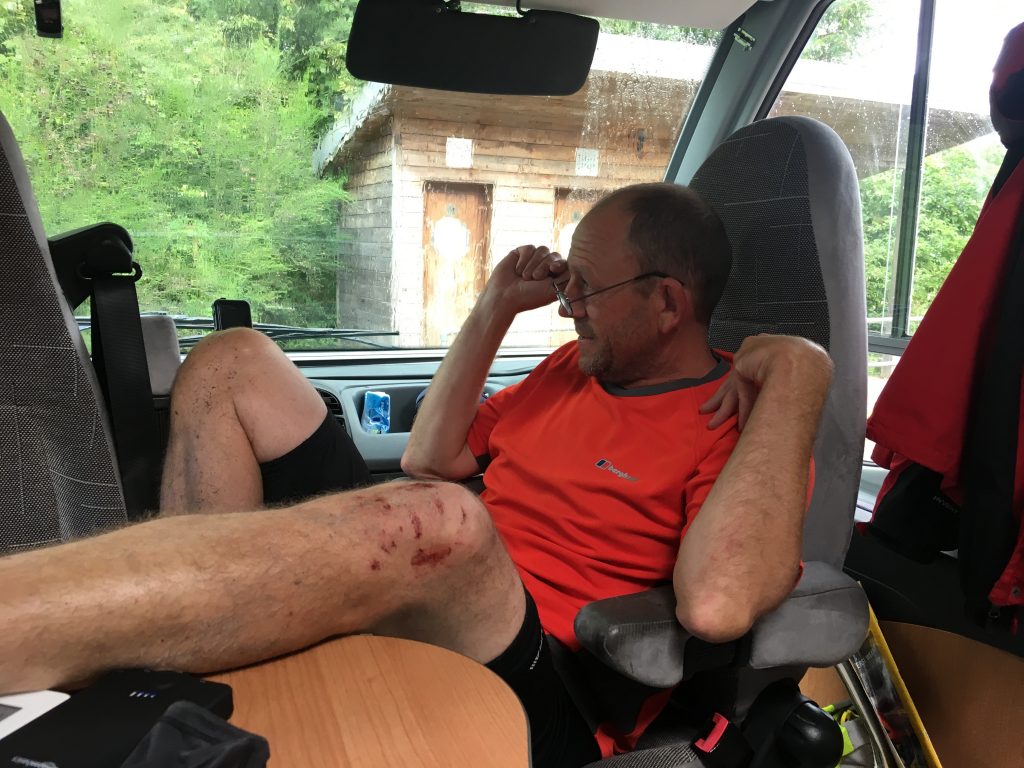 The only photo from today – Paul’s dreadful injury