We were looking forward to visiting the Natural Park of Cabo de Gata, somewhere that we had seen on blogs and forums and imagined we would enjoy.

We started at the western end of the park, driving (via supermarkets) to the town of San Miguel de Cabo de Gata where there is a large area of hard standing behind the beach. Motorhomes were parked in neat rows looking out to sea and we started a third row, peering through the ranks in front of us to see a sea that was still wild and foamy from the winds of the days before. 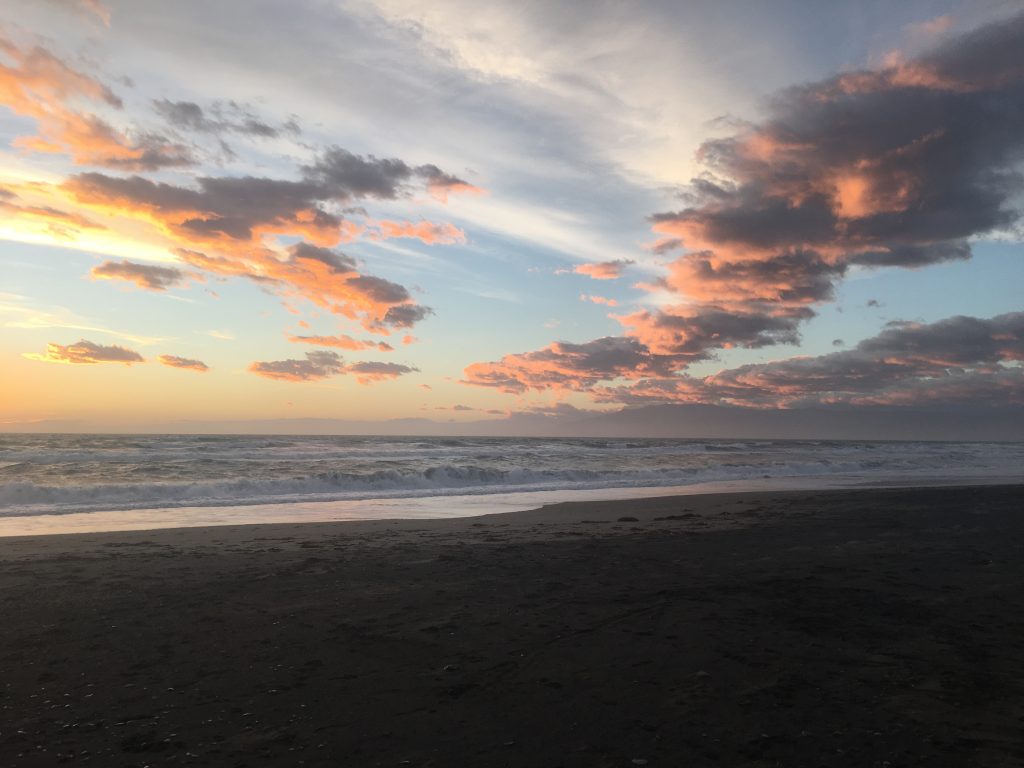 Clouds at sunset, looking out to sea from our parking spot

There was a tap here, which was lucky as the water we had taken on board at the campsite in Balerma had a very strong chemical taste that was really unpleasant. A lot of people prefer to drink bottled water and use their water tank for cleaning and washing, but because we’re in the motorhome full time we are flushing water through the tank quickly so feel quite happy using it for drinking too, usually, but with the horrid taste of the water from the campsite we decided to fill our emergency water containers up here for drinking until the water in the tank had been flushed out.

On the way to the parking spot we had passed the end of the salt pans that run behind the coast here. We had spotted a hide for viewing the birds and wildlife of the area so took a short walk alongside the road back to the hide so that we could do a bit of flamingo watching. This is the third place we have seen flamingos and they have not lost their appeal, with their bizarrely rubbery necks, great scooping beaks and the intense flash of dark pink as they raise their wings. 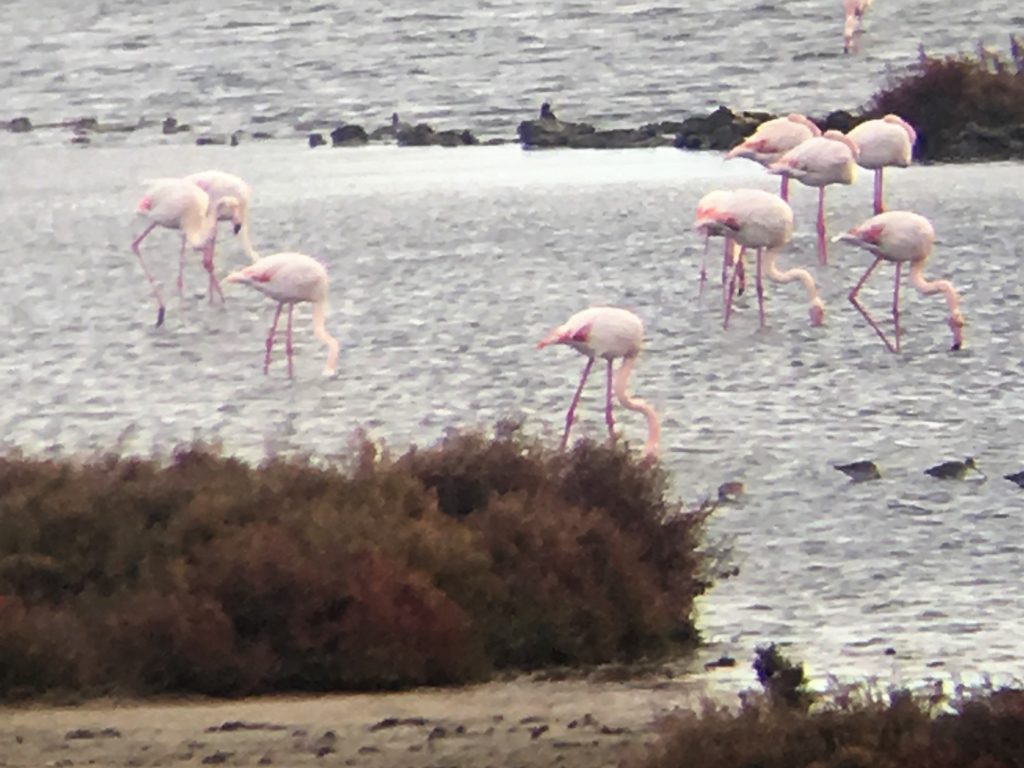 The following day we got the bikes out and cycled along the road eastwards in front of the salt flats. Here we got the answer to one of our questions from the previous day – what were all the lorries doing going past the carpark? At the eastern end of the salt flats was a salt production operation with great mounds of salt and lorries going to and fro all day. 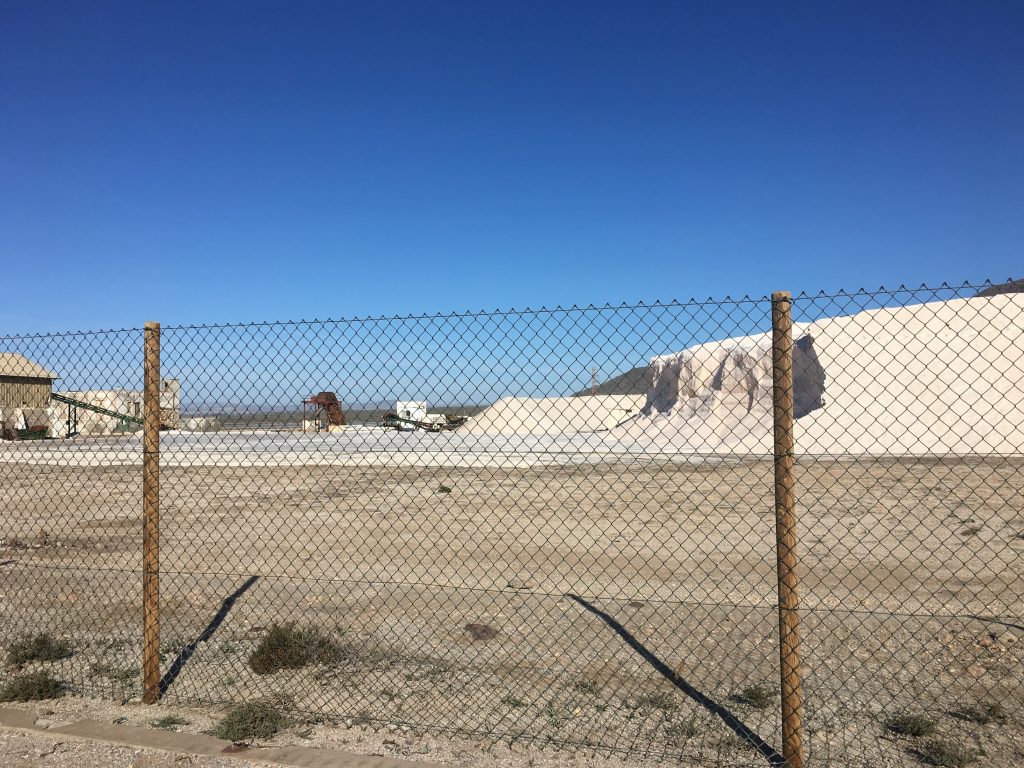 Mounds of salt ready for distribution

Soon after this the road started to go uphill and we huffed and puffed from the shock of steep roads after our days of lethargy at Christmas. Luckily the uphill was rewarded with a downhill section towards the lighthouse, where we were able to take a few offroad paths. Then more uphill, steeper and higher this time as we went past a barrier (the coast road is not a through road, unless you are the type of person who will drive their family hatchback anywhere – and there are a few of them round here!), we climbed up this road, up and up the tarmac to the Torre de la Vela Blanca. 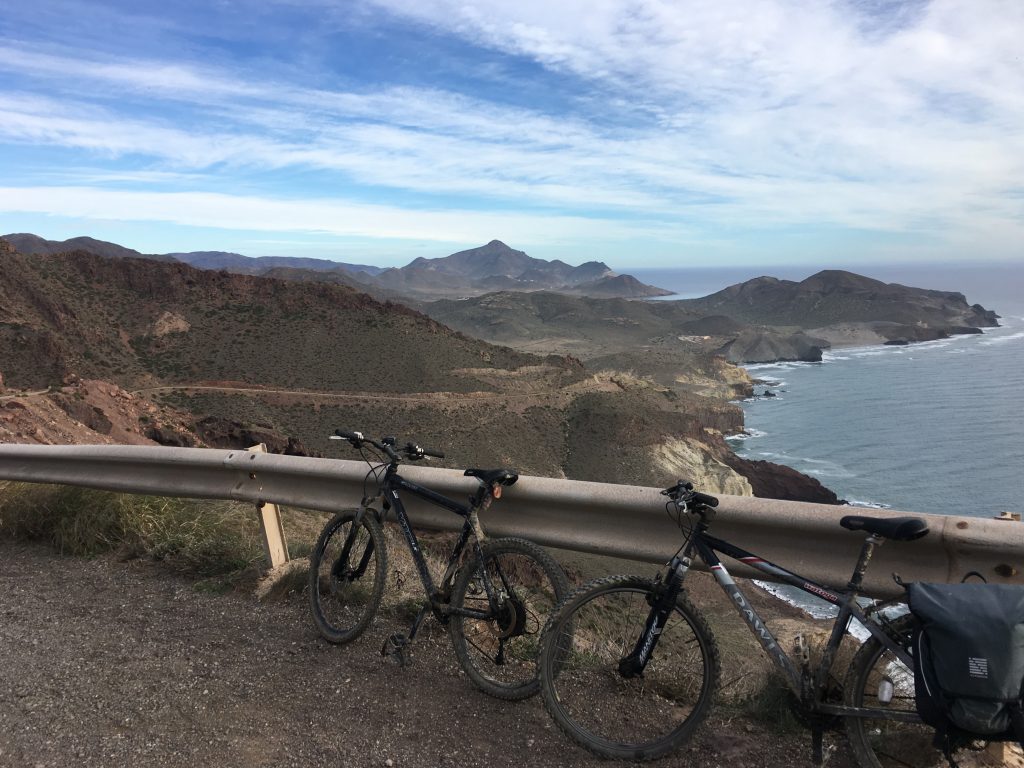 Then down the other side, this time the tarmac had disappeared and we were on rough dirt track. Paul whizzed down over rocks as I picked my way more carefully, using my brakes nearly the whole way. 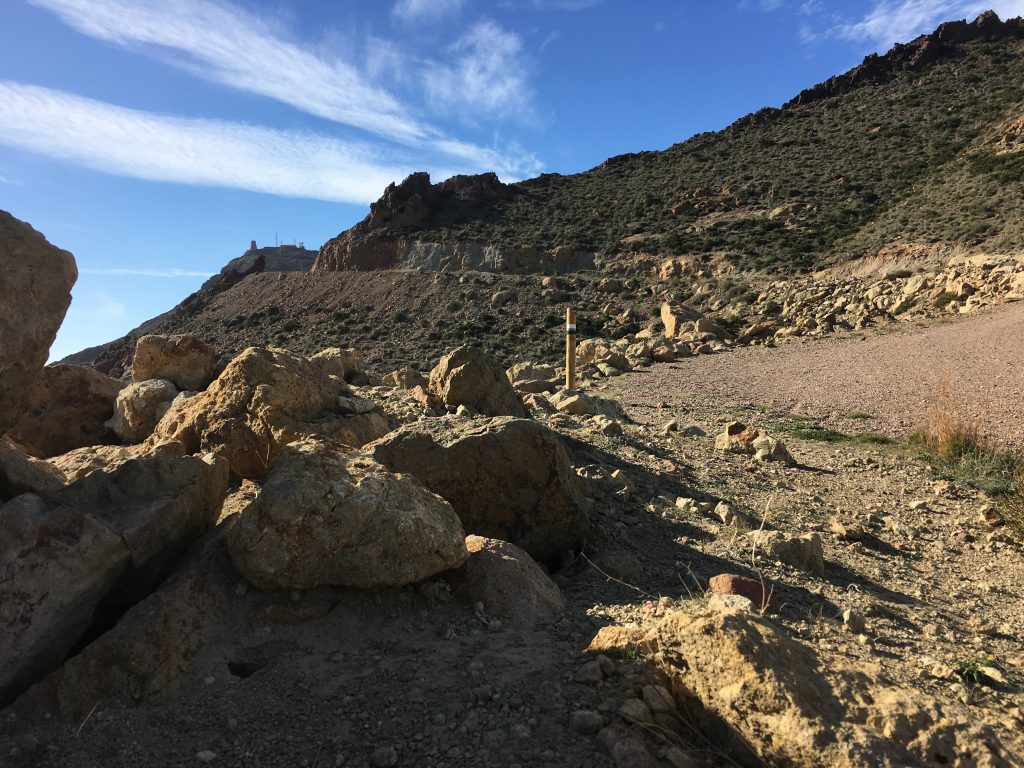 Down on this side we went past several possible motorhome parking spots and beaches until we got to the beautiful Playa de los Genoveses where we stopped for some lunch. This looked ideal for overnighting in Bertie and we agreed we would head here for the night. 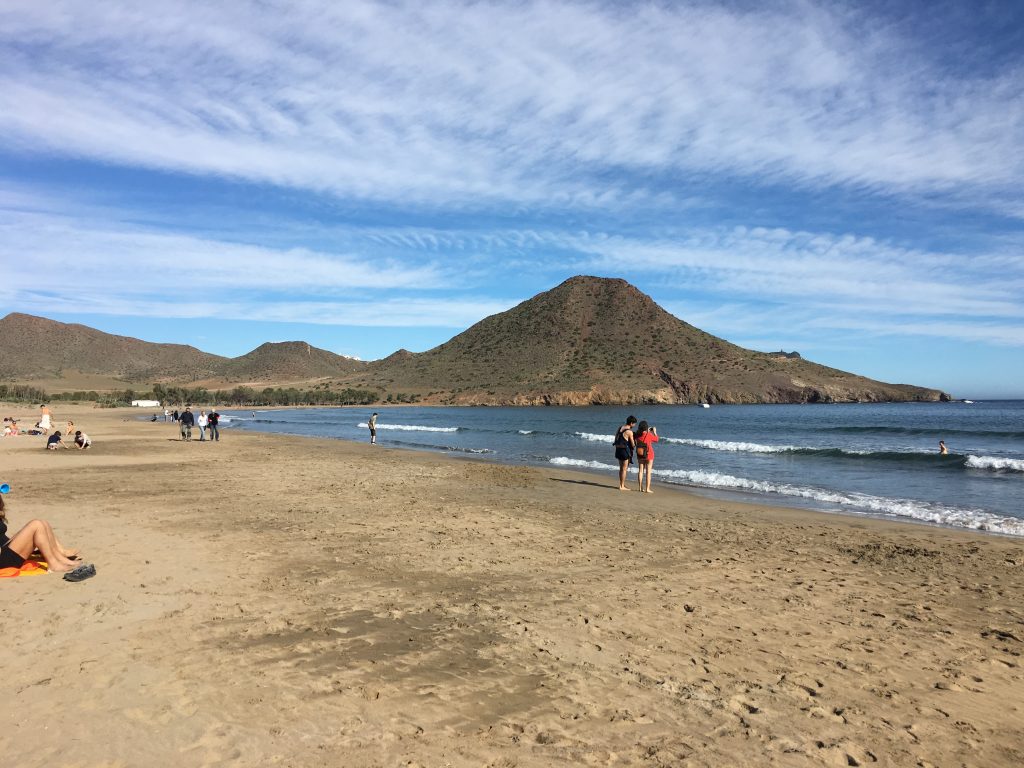 On the way back we pretty much retraced our steps until we got to the salt flats where we went a bit further inland to follow a sandy track which ran closer to the lakes, there were three further hides along here which we visited in succession, watching yet more flamingos and other wading birds. 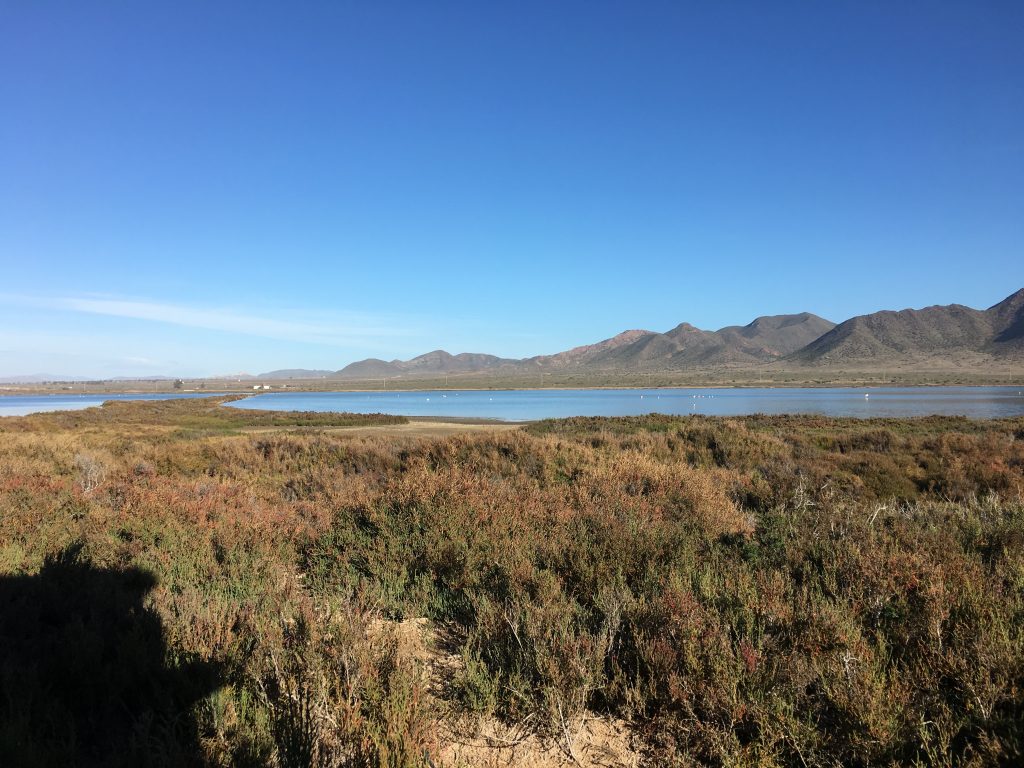 Looking across the salt lagoons from one of the bird hides

As an introduction to Gabo de Gata it rated pretty well and the rollercoaster ride had been a good re-introduction to exercise after our Christmas relaxation. With the beautiful surroundings of the coast and volcanic hills, and with improving weather, we looked set for a good few days.