Our plan was to head west to the Pembrokeshire coast, we’ve missed the sea since we left Exmouth.

First though we needed to find somewhere to stay the night after visiting the Welsh National Gardens, a wild camping spot was found not far away next to Dryslwyn Castle where there was a car park and picnic area below the castle on it’s hill and next to the winding river Towy which we had followed down from Llyn Brianne the previous night.

The next morning we had a quick walk up to the castle, a jumbled collection of stone walls and foundations from the thirteenth century onwards which was more impressive than it had looked from the road and had commanding views of the whole landscape. Just as we started down a fighter jet flew past low over our heads and then banked around and flew past again – a little air display just for us (the sheep didn’t seem to be too bothered).

The weather looked like it was going to be better than expected over the next couple of days, so we jumped into Bertie and set off for the coast. First stop was Skrinkle Haven where we found a car park on the headland just beyond the youth hostel. We parked up and looked for any ‘no overnight parking’ restrictions. Good news, we could stay overnight, as could the three other motorhomes who turned up later and circled around their very own corral, presumably to keep out the natives, or maybe to defend themselves from the young people who ventured up from the Youth Hostel later that evening with their guitars and sang us to sleep with renditions of Ed Sheeran songs.

Parked up, we ventured out along the coast where the geology of the area could be seen in it’s full – 90 degrees to normality – glory. The layers of rock pointing vertically from the ground mean that there are many caves, stacks, holes and arches along the coast. Skrinkle Haven beach itself could only be reached at low tide – which we had missed – so we peered through the small cave that separated it from the accessible Church Doors beach and said that of course we would have wriggled through, if only the tide was low enough. 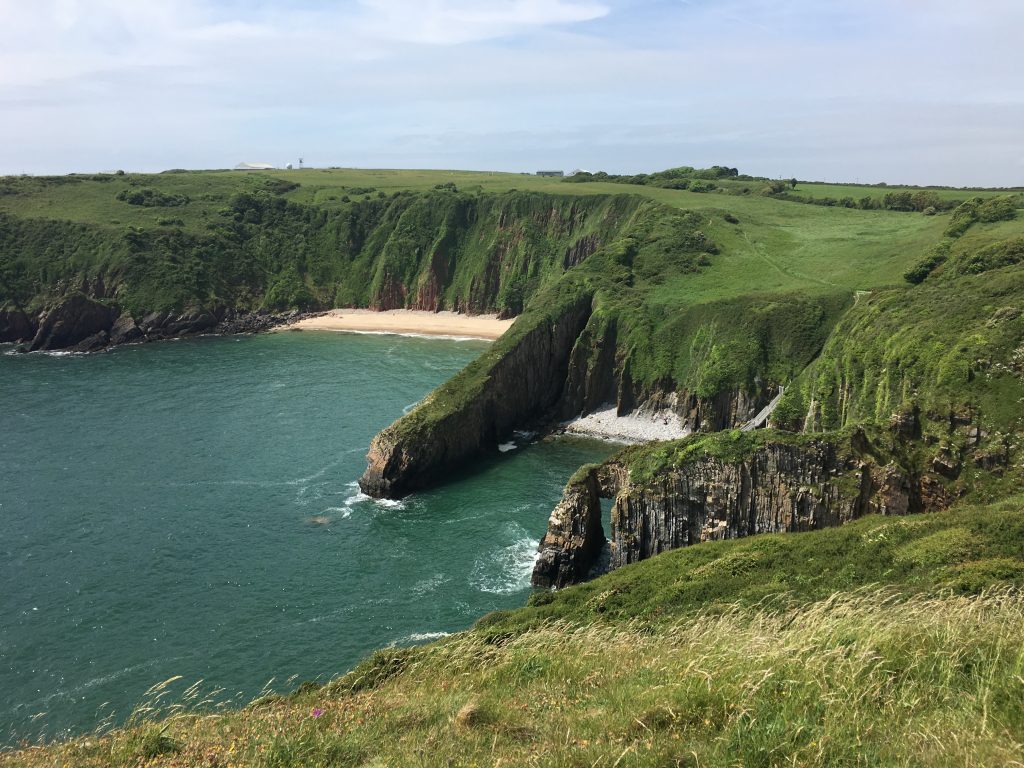 We walked as far as Manorbier, Paul saw an ice-cream van and so we had to stop and eat ice creams while admiring the outside of Manorbier castle, no cash to spend on the entry fee after spending on ice-creams!

Back at Bertie for the evening we have a fabulous view over the bay and watched fishermen on the cliffs opposite us. I have no idea how they landed their catch (if they managed to catch anything) as they must have been a good 5 or 6 meters above the sea.