Since our last post we’ve now had a whole week staying in coastal locations. Not time travel, but up till now I have been running a little behind the current date. 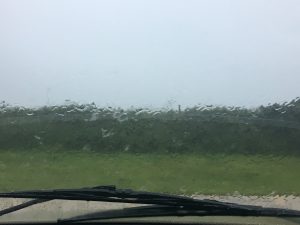 Rain on the windscreen

Passing time in the rain is quite difficult when you’re trapped in a small space. We both have jobs to do, but when it’s really torrential and we cant leave the van there isn’t the space for both of us to get on with those jobs. And we’re trapped in our seats – we don’t have much room to get up and move around. It would be fair to say that we get a little stir crazy. On top of that the noise of the rain and wind can be quite loud. So neither of us get a good night’s sleep and we end up a bit fractious.

So what have we done while it’s been raining?

Paul has been out and cleaned Bertie. Bertie had managed to get covered in vegetation and seeds when we drove down some narrow country lanes, so we (Paul) took advantage of the rain to give Bertie a brush and remove all the bits.

I have done some sewing – finishing off the pockets I’ve been making to hang in the bedroom – I’ll now have somewhere in easy reach to keep my kindle, glasses and other bits and bobs overnight.

I made scones and we had a cream tea to cheer ourselves up. 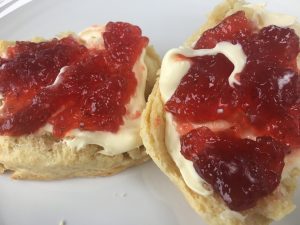 We have played a lot of cards, Yahtzee and scrabble. We really need to learn some more two player card games as Crib is starting to get a bit stale.

One downside of the rain is finding out that Bertie has a leaky rooflight. The leak seems to be dependent on the direction of the wind, so we don’t get drips all of the time, but it’s a definite problem that we’ll have to resolve when we get some dry weather. Quite probably this is our fault, we’ve done quite a lot of walking around on the roof, installing the solar panels and working out how we’re going to transport, raise and lower the kayak. All that weight on the roof can cause it to flex which can make the sealant let go and leave gaps for the water to get in.

We now know that we’re going to have to get ourselves a bit better prepared for the rainy days. We’ll be sorting out some films and TV to keep us entertained and using things like our National Trust membership for some indoors days out.

4 thoughts on “When it rains…”