We moved on from Rhandirmwyn on a grey and miserable morning, not sure what we would do to fill our day. We had thought about going to the Welsh National Botanic Gardens, but didn’t really want to trudge round gardens in the rain and indoor entertainment opportunities were limited.

While we made up our mind we headed west and popped into an Aldi to pick up some more shopping. We seem to be stopping for food far more often that we would normally shop at home – I think it’s because we haven’t got used to the food storage in the van. At home we had two freezers, a large fridge and more cupboards than anyone rightly needed, this meant that we could stockpile the basic essentials like bread and milk as well as the not so basic (did I really need 50 different spices? some of them were well past their sell by date), and needed less trips to the shops. In the van we have a very small freezer, reasonable fridge and a cupboard that does hold a lot, but is a right pain to find anything in. Anyway, this means that we cant put a loaf of bread or a couple of pints of milk in the freezer for emergencies and whenever we pop to the shops to buy a loaf of bread a few other things find their way into the basket.

Outside Aldi we bumped into another motor-homer and mentioned our predicament (where to go for the day – not our shopping habits). Don’t worry, he said about the gardens, it’s mostly inside anyway. And although he was wrong (the greenhouse is the main event, but there are a number of outside garden areas) we’re glad that he encouraged us to go.

If the weather had been better we would have parked up and cycled into the gardens to take advantage of the half price entry for cyclists. But to be honest it was just too miserable, so we parked up in the coach car park and went into the ticket office. When I explained that we had a motorhome and were parked in the coach car park, the chap who served us asked if we wanted to stay overnight. Sounds like a plan we thought, nice and easy, but sadly it was a Britstops location and as we’re not members the manager wouldn’t let us stay – boo.

The day started to get brighter as we walked around the gardens, the enjoyment a little muted as we don’t have a garden of our own anymore so any thoughts about plants that we would like are going to have to be filed away for the future.

The single span greenhouse (the largest in the world) was impressively inset into the hill and had a meandering path around two levels of plants that thrive in Mediterranean climates from Australia to California. There was a tropical glasshouse with butterflies which I could have stayed in for ages (mostly to warm me up). Outside there was a bird of prey demonstration with a Golden Eagle, Sea Eagle and several smaller birds, where we found out that the British Birds of Prey centre is going to be sited in the gardens and should be open next year. When the rain seemed to have died away we walked around the walled gardens and the lakes, where Paul spotted an otter – I didn’t, all I got was the swish of the vegetation and the ‘plop’ as it disappeared. 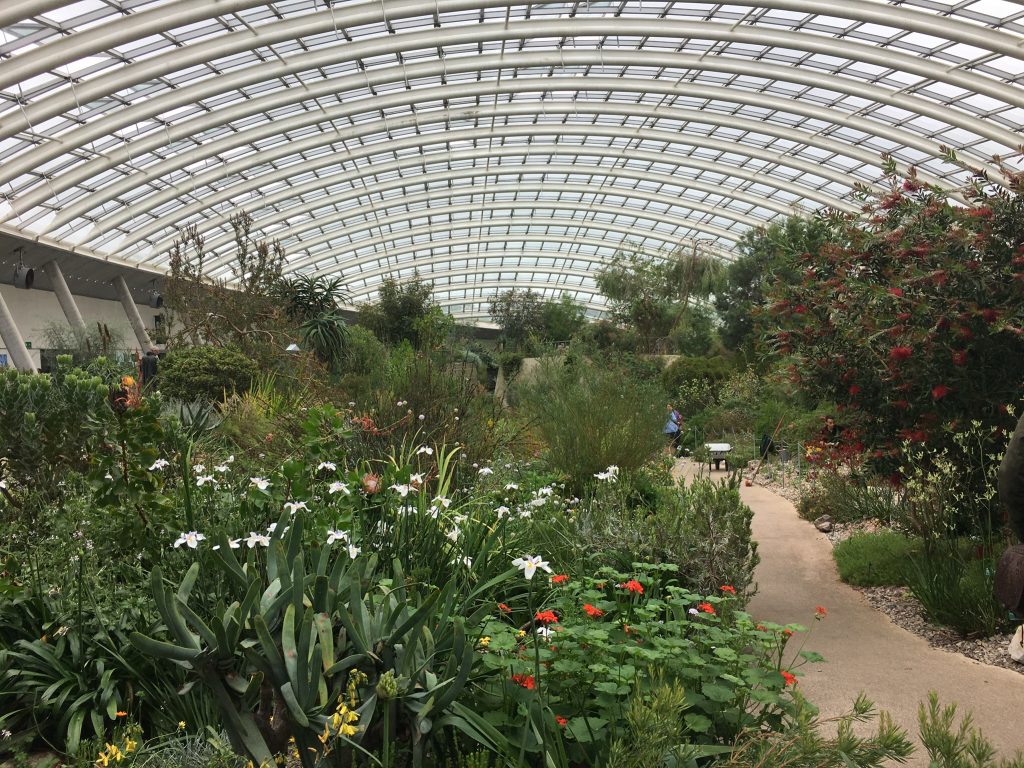 Inside the single span greenhouse designed by Norman Foster 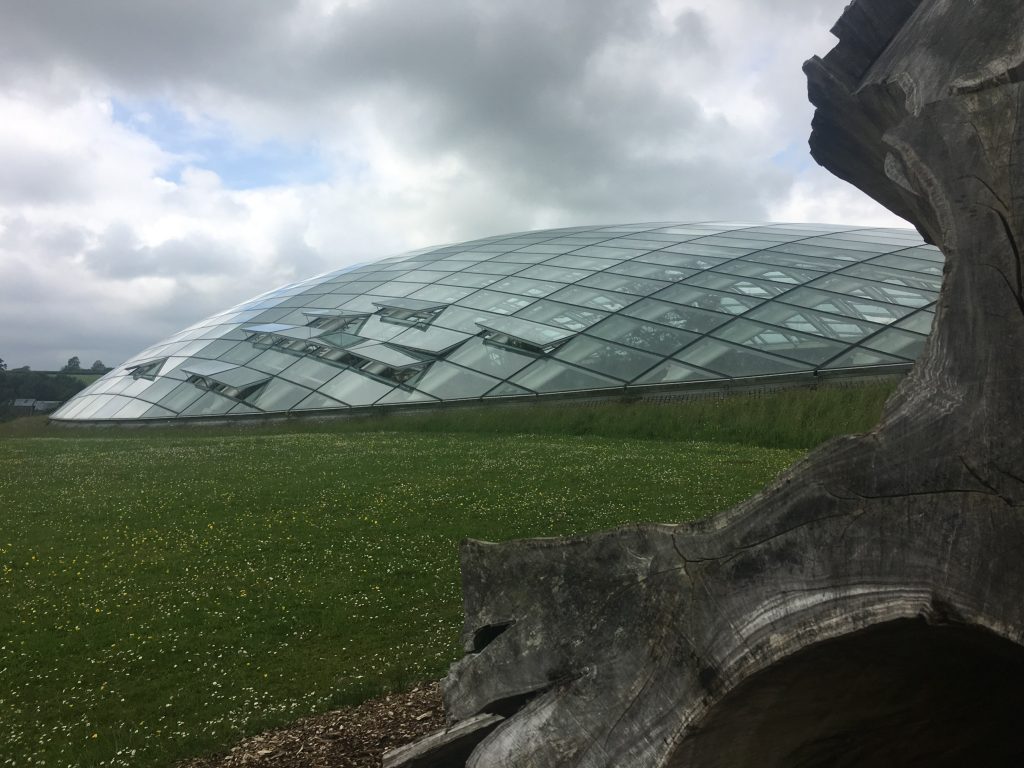 The Great Glasshouse from the outside 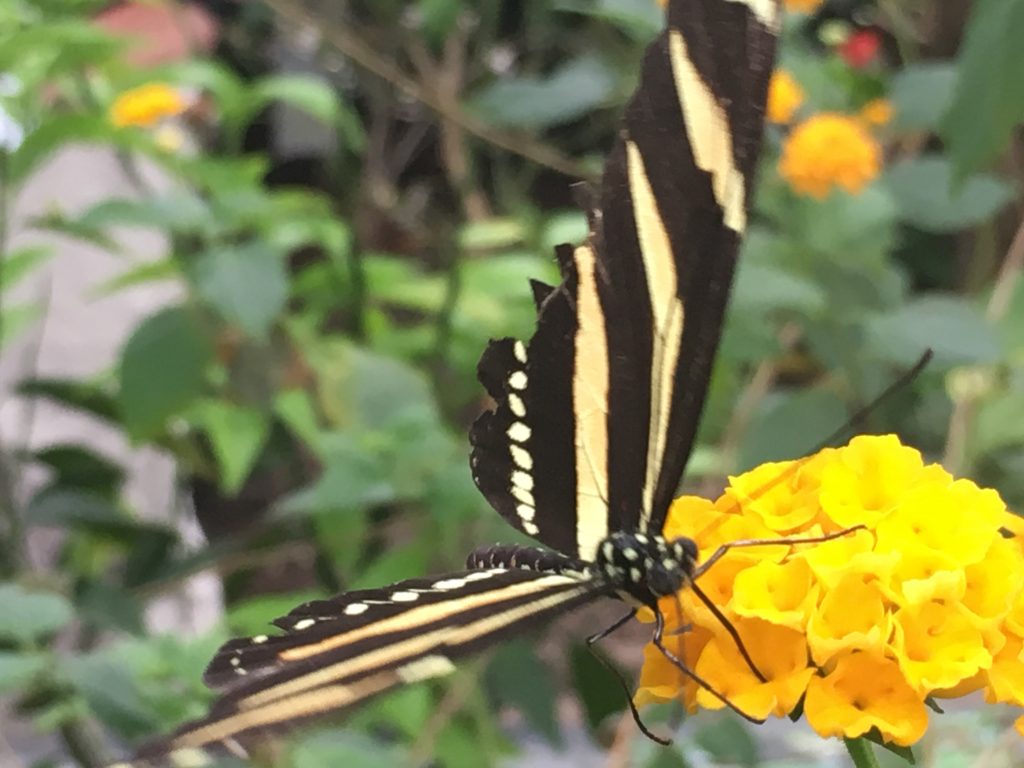 Butterfly in the tropical glasshouse

My favourite part though, and only a small thing, was the stream that runs down the main path through the gardens, it snakes through various features and geological exhibits and at one point disappears down a hole and bubbles back up again a few meters later, I want one!

After a few hours the sun was threatening to actually make an appearance and we headed off to find somewhere to sleep for the night.