The weather was still very warm, but we decided we wanted something to do other than sit under our awning, so we took advantage of the campsite facilities for one last time before moving back the way we had come.

We didn’t go all the way back to Fairbourne, but stopped at the car park in Penmaenpool. From here we could easily cycle to Dolgellau and from there pick up one of a number of cycle routes. 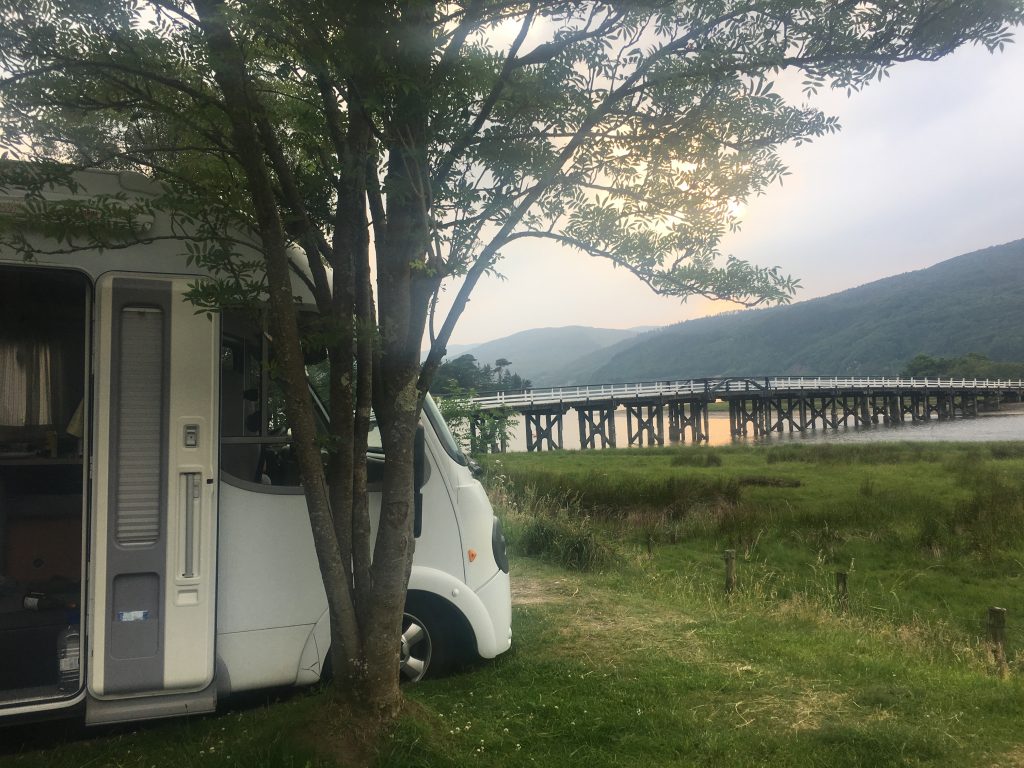 View to the toll bridge from Penmaenpool. The bridge wouldn’t take Bertie’s weight.

Because of the heat we decided to head north from Dolgellau which would give us some cycling opportunities in the Coed-y-Brenin forest. What we didn’t realise was that Coed-y-Brenin is also home to a mountain biking centre with an extensive network of mountain bike trails and single-track.

Now when we set off on our travels Paul made me choose which bike to take with me, my mountain bike or the bike I had been using for commuting. And when I say he made me choose, what I mean is that he strongly suggested that I was only allowed to bring one bike and that should be my mountain bike.

I couldn’t fault his logic really, although a mountain bike isn’t as fast as a road bike it gives more flexibility. We can use them on terrain which would be challenging for a road bike or hybrid and that opens up more of the off-road routes that we (mostly) enjoy. However we haven’t used our mountain bikes for technical downhill trails for years, and when compared to modern mountain bikes they look pretty backwards, I haven’t even got disk brakes.

The cycle route followed the Afon Mawddach from Penmaenpool, through Dolgellau and then up into the forest where it eventually crosses a footbridge over the river. We stopped here to take in the view and have a quick refuel, the river runs through a steep sided gorge with multiple pools and waterfalls at this point, it was so warm it would have been nice to just dive in. 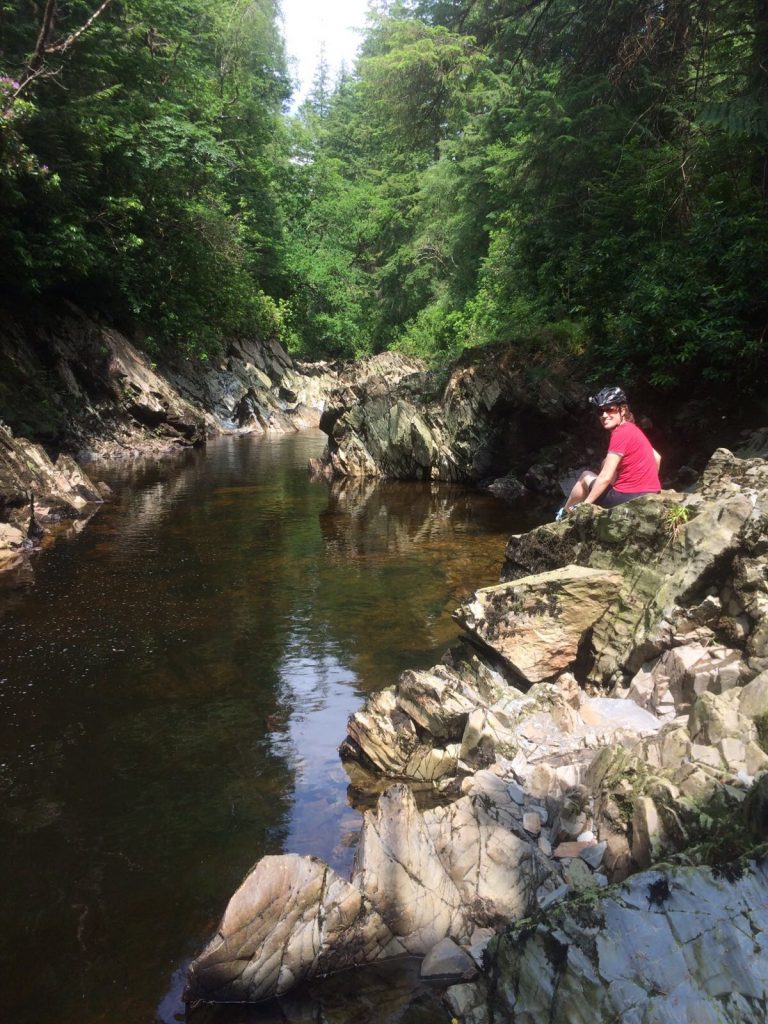 Cooling off by the river

Next to the bridge was a map of the downhill trails and we realised that we could pick up a number of trails that would take us back downhill without needing to retrace our steps. After a bit of a discussion about whether we were to old or too chicken to do it and whether our bikes would fall apart on the way down, we decided to go for it. So we bounced up and down 4 miles of red graded single track and had a great time. We may have looked a little odd, I’m not sure that many people go down these tracks with Panniers on their bikes and I know I made some strange noises on the way down, but we made it with nothing broken on us or the bikes.

The rest of the route back seemed very tame in comparison, we stopped for a bit of shopping in Dolgellau and them made it back to the carpark where we were going to stay overnight. Another motorhome joined us and then an extremely large bus sized German motorhome drove in, we looked at it with incredulity – how on earth did they expect to get parked? – and awe – how on earth had they managed the roads? – but they obviously decided that this wasn’t the parking spot for them, executed a 37 point turn and exited the car park. We saw them parked in a much more manageable layby the next morning.

While driving through Dolgellau we chanced upon a film crew who were filming a new TV series called Requiem. This was a bit of a pain as Dolgellau’s streets are quite narrow and the diversion was ‘interesting’. However it did allow us to do a bit of ogling of actors. Paul recognised Joel Fry straight away, the poor chap is always going to be the nice but dim Leighton from Trollied in Paul’s head, but we had to come back and google the rest.