Calgary is a city in Canada, it’s airport is often used as a gateway to the Rockies. Calgary is also a small village on the North West corner of Mull with a wonderful white sand beach at Calgary Bay, a car park and an official wild camping area. We moved to Calgary early that morning and were very glad that we’d decided to move on so early as the car park filled up pretty quickly, the sun was shining and the perfect white sands were a magnet for walkers, sightseers and photographers. We gave the official wild camping area a miss because the grass was quite soft underfoot and although it had the lure of public toilets the water supply was not on and so they were quite disgustingly blocked. 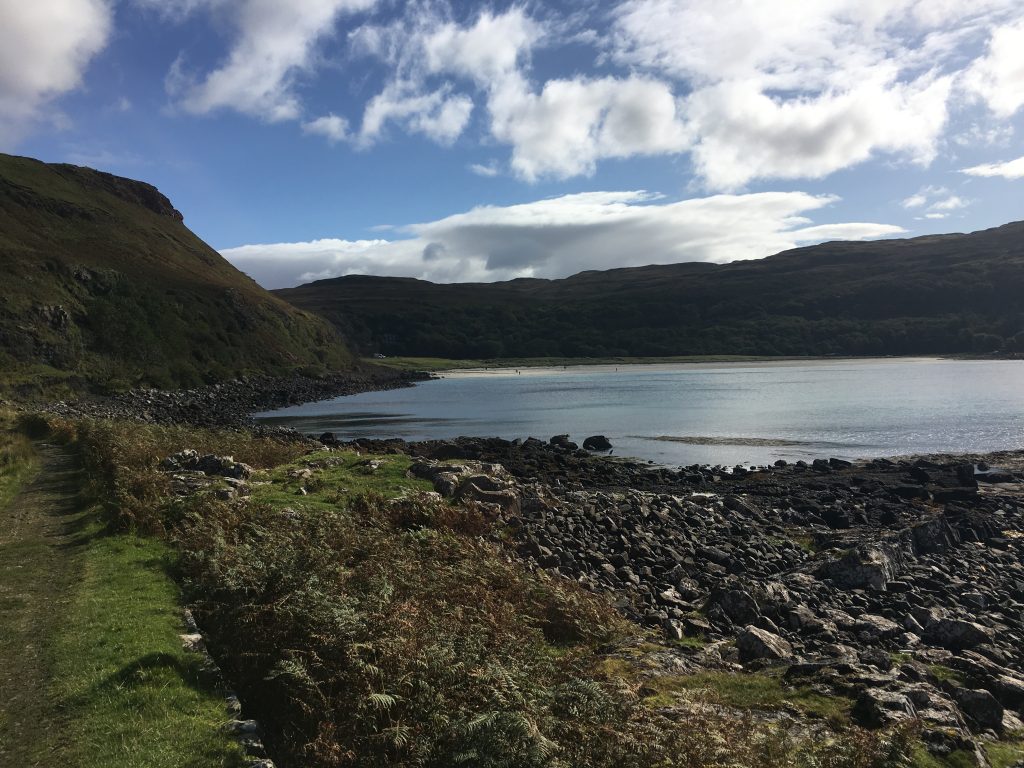 Looking towards Calgary Bay from the start of our walk

We walked from the car park around the headland, an 8.5 mile walk that started along the coast following indistinct paths. Walking in Scotland can be interesting because although you have the ‘right to roam’ the number of marked public footpaths on OS maps is actually quite small compare to England, many walks are guess work where you have to either follow a path that you hope leads where you are going, find an internet report of a walk that someone else has done or interpret the contours on the map to determine a reasonable route; occasionally all three. We knew that people had walked around the headland before, but didn’t know what route they had taken.

There was a clear path towards an abandoned jetty, but after this it was difficult to make out whether the paths were man made or sheep trails and we wended our way sometimes close to the shore and sometimes along narrow tracks just underneath the cliffs, making sure that we were never committing ourselves to something that we couldn’t retrace later and keeping as low as possible. 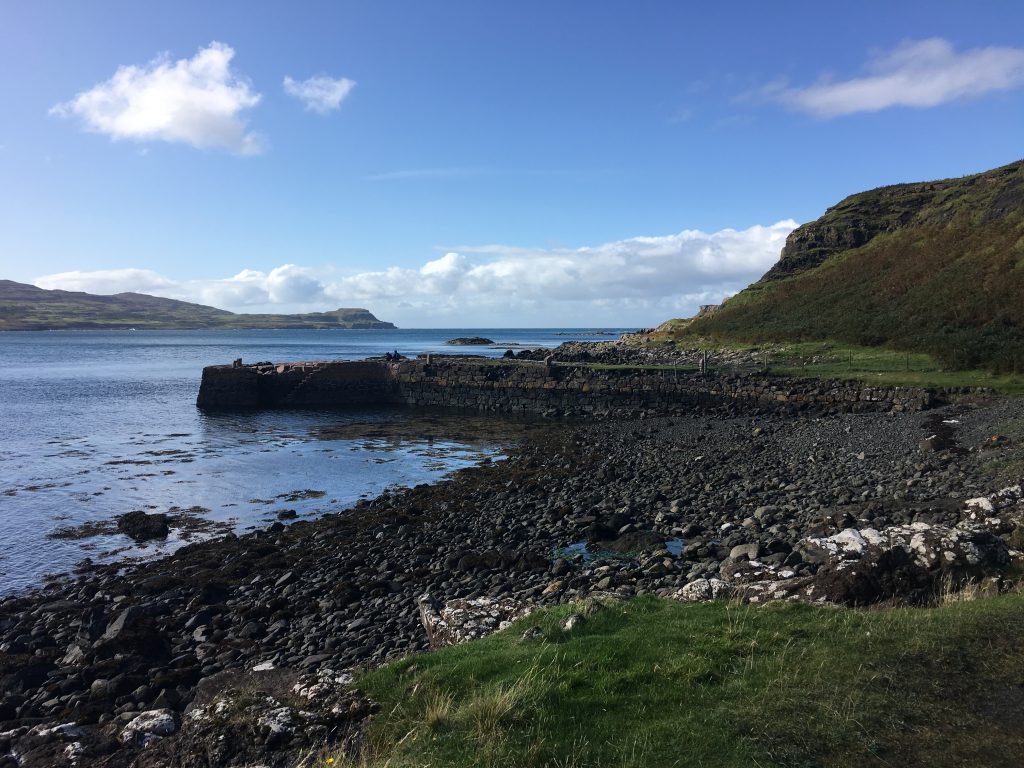 The coast here was made up of slumped volcanic cliffs with grassy terraces and we didn’t really want to get caught in a dead end and make the walk longer. 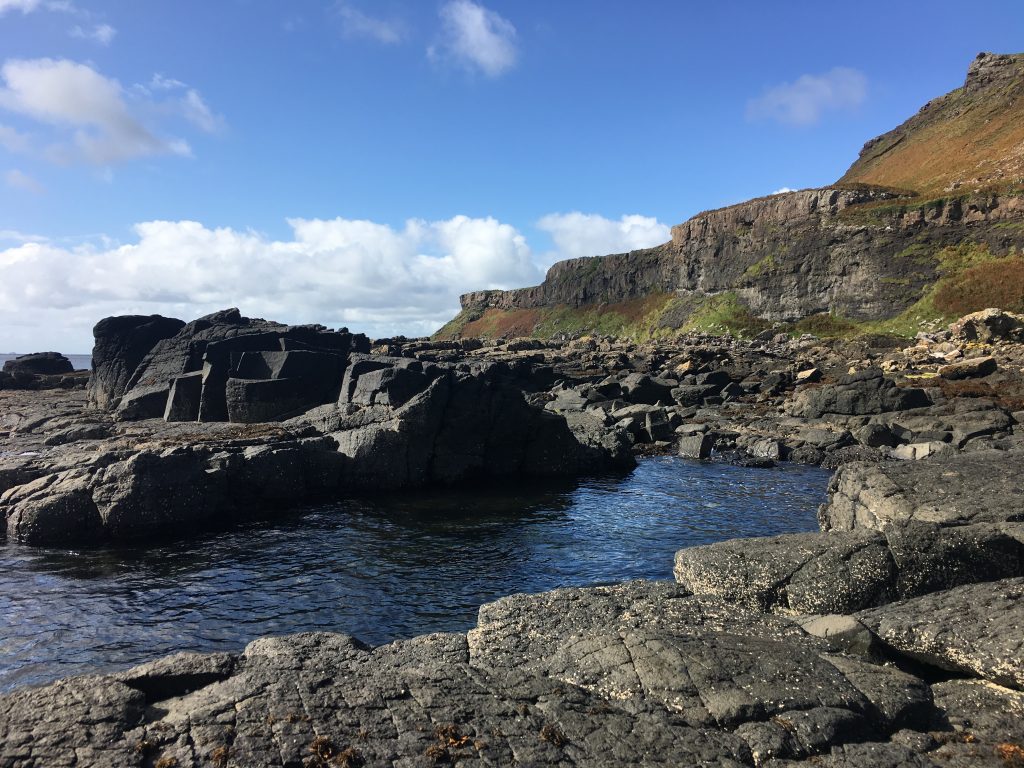 Coasts and cliffs around the Caliach headland

We were aiming to ascend from the coast onto the top of the cliffs at the ancient fort where it looked like there was a causeway up through the cliffs. Thankfully this was an easy way up, but at this point we were subjected to the full force of the wind. We hadn’t realised how sheltered we were in the bay. So when we reached a convenient spot on the cliffs with some shelter from the wind we took the opportunity to have our lunch. It was here that we saw our first sea eagle, it swooped down in front of us and perched on a rock, surrounded by the sea. There was great excitement, what an ideal situation for a photo. I fumbled my phone out only for the eagle to take flight as it was splashed by a wave. Oh expletive! Well at least this time we were sure of what it was with it’s white tail clearly distinguishable when it came in to land. 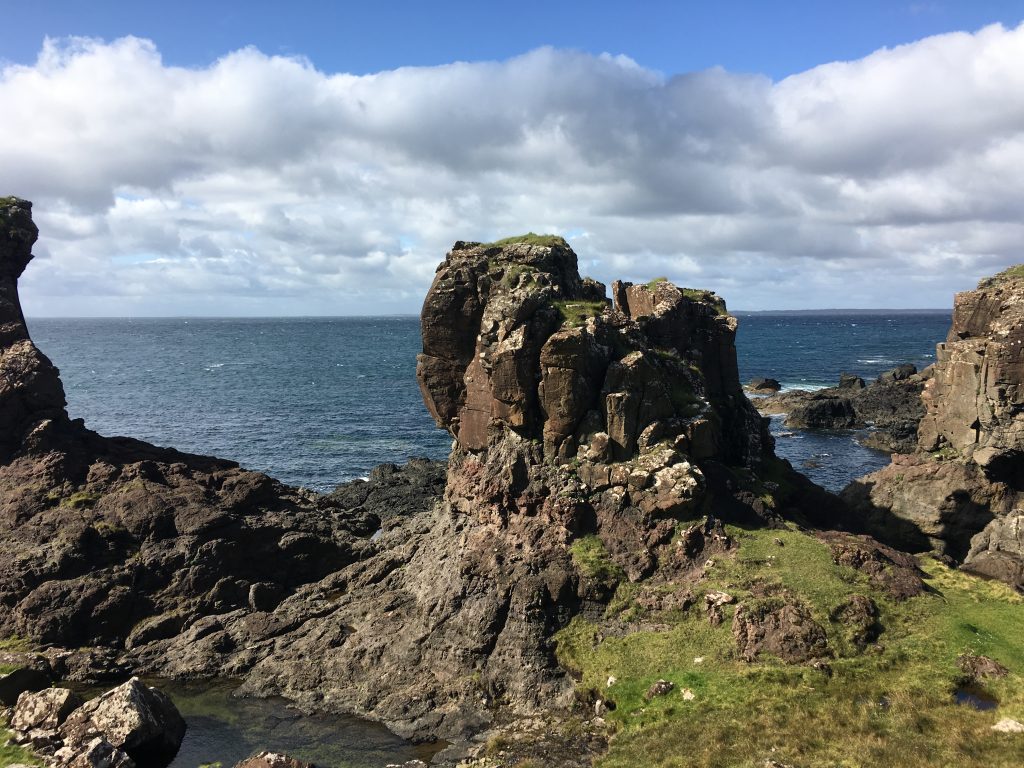 We made our way further round the cliffs towards Caliach Point. We were trying to keep as close to the coast as possible but there were frequent deep clefts in the coast which we had to make our way around. At the trig point we stopped for a short while to look at the views but the wind didn’t encourage us to stay, and we quickly walked down to the farm where we picked up the minor road and walked on tarmac back to Bertie.

When we got back we popped down to the beach, I was tempted to swim but the clouds came in just as we walked down and a dip without the sunshine didn’t have the same appeal. Instead we walked along the beach enjoying the views and the feeling of soft sands underfoot. Here at Calgary there has been a concerted effort by the local population to preserve the machair, a rare coastal grassland habitat that has been traditionally used as common land for grazing. Where once the wild camping spread across all of the bay there is now a significant fenced off area that is protected. I wonder whether the lack of water at the toilets is an additional tactic to try and put all but he most hardy off using the wild camping area.