We had finally arrived in the Valle d’Aosta, the most westerly of Italy’s alpine regions which has borders with Switzerland and France. In fact French is an official language as well as Italian (and many people also speak a local dialect) and so you will see both on road signs and other information boards and people. The Aosta valley runs from east to west and has subsidiary valleys both north and south of the main artery. The valleys to the south take you into the Gran Paradiso national park, more about that later. For now we were heading north into the Valtournenche.

We’re quite familiar with the Valtournenche (the name of the valley, a town in the valley and the local ‘commune’) because we have skied here a few times now. Mostly our skiing has been at the head of the valley in the resort of Breuil-Cervinia, so, for a bit of a change, we wanted to spend some time lower in the valley.

We popped into the tourist information centre in Antey-St-André to see if we could get some information on walks and bike rides in the area. This was one of the most helpful tourist offices we have been into yet, it probably helped that the lady spoke good English so could ask us lots of questions about what we were planning to do and how long we were planning to be here. We left with a good map of walks and mountain bike routes in the lower and upper valley (€5) and booklets of bike rides, driving routes, local food and drink, castles and motorhome parking spots. She also advised us to head to Torgnon if we wanted somewhere peaceful and surrounded by mountain scenery and walks. The sosta in Torgnon is free outside of the ski season AND has electricity, we took her advice and headed up the switchbacks to the strung out series of hamlets that make up Torgnon. 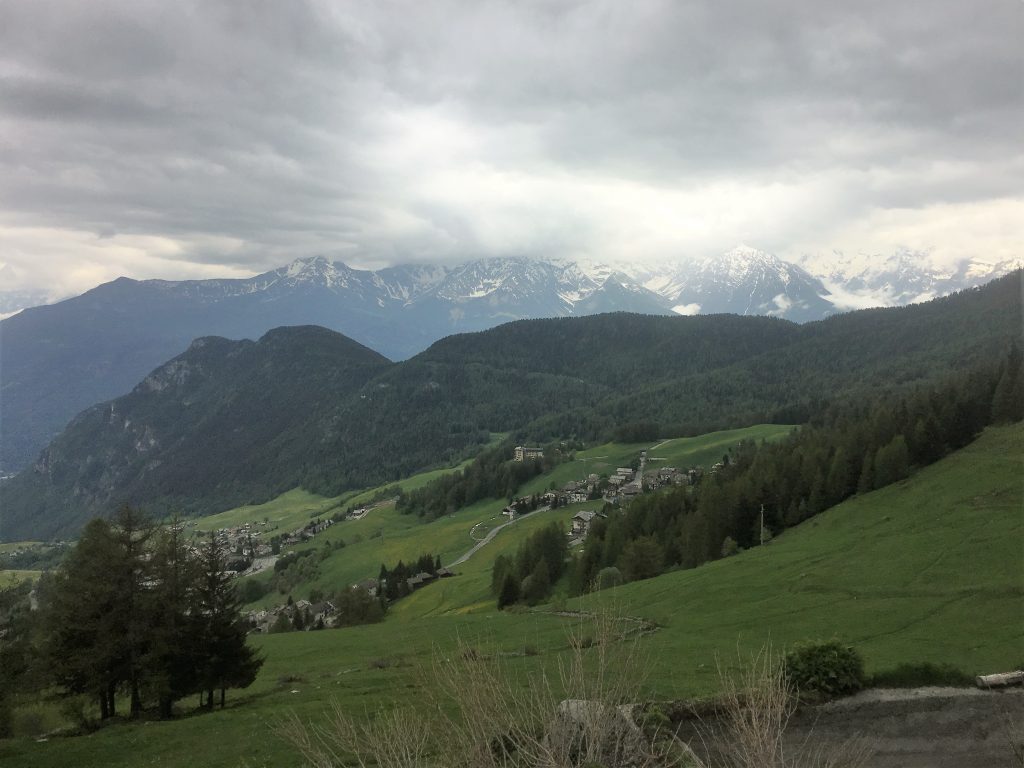 Looking down on the hamlets of Torgnon

The sosta is beyond the top of the village just under the small ski resort. As promised it was quiet; the restaurants and cafes in the ski area do open in the summer, but not till July. There was a bit of road repair going on, and every now and again a car or van would drive up to one of the buildings. There was a ski lift directly in front of us and every day someone would come up and start the lift up, we wondered if this was a usual summer routine, just keeping things ticking over. One day the chairs on the lift had large blue containers on them, we assumed they were testing the weight capacity of the lift as they had about 100 of the containers stacked up next to it and when we went for a nose they were pretty heavy. 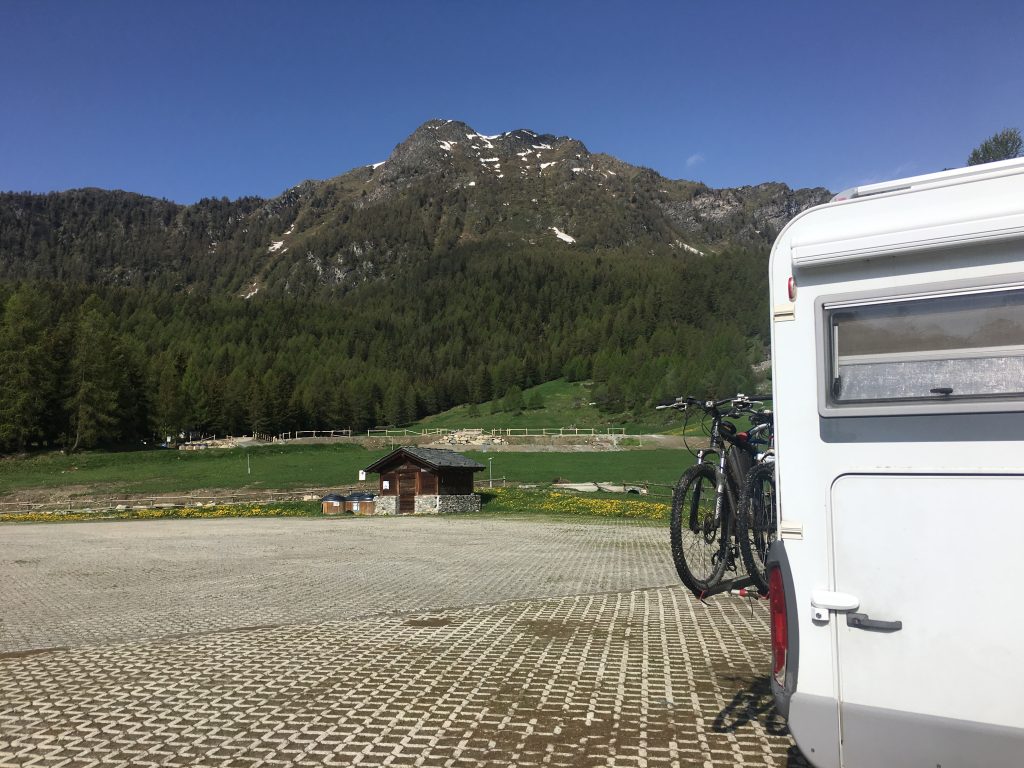 View from the sosta at Torgnon

We stayed here for three nights in glorious isolation, the weather was the typical mountain weather we have been experiencing for the last month or so. Dry and bright in the mornings, cloud building up during the day and rain and thunder at some point in the afternoon. So we tried to drag ourselves out of bed as early as possible in the mornings (which is still pretty late really) so that we could get out and enjoy the outdoors before the rain fell.

On the first day we followed a mountain biking route that doubled as a cross country ski trail in the winter months. We cycled out of the parking area up to the ski resort where signposts pointed the way for us (this was also walking track number 1). This ride took us through mountain scenery to paths around small lakes, over streams and under gushing waterfalls. We stopped for lunch in a dilapidated building to shelter us from the rain and were very excited to see marmots frolicking in the meadow in front of us. The highest point of the trail took us over 2100 meters and we ended up having to push the bikes uphill over snow in this section which was a bit demoralising. It was a shame that the weather wasn’t better for this ride because the views were very beautiful but by the time we got back we were muddy, soaked and had fingers like icicles, hence a lack of photos. 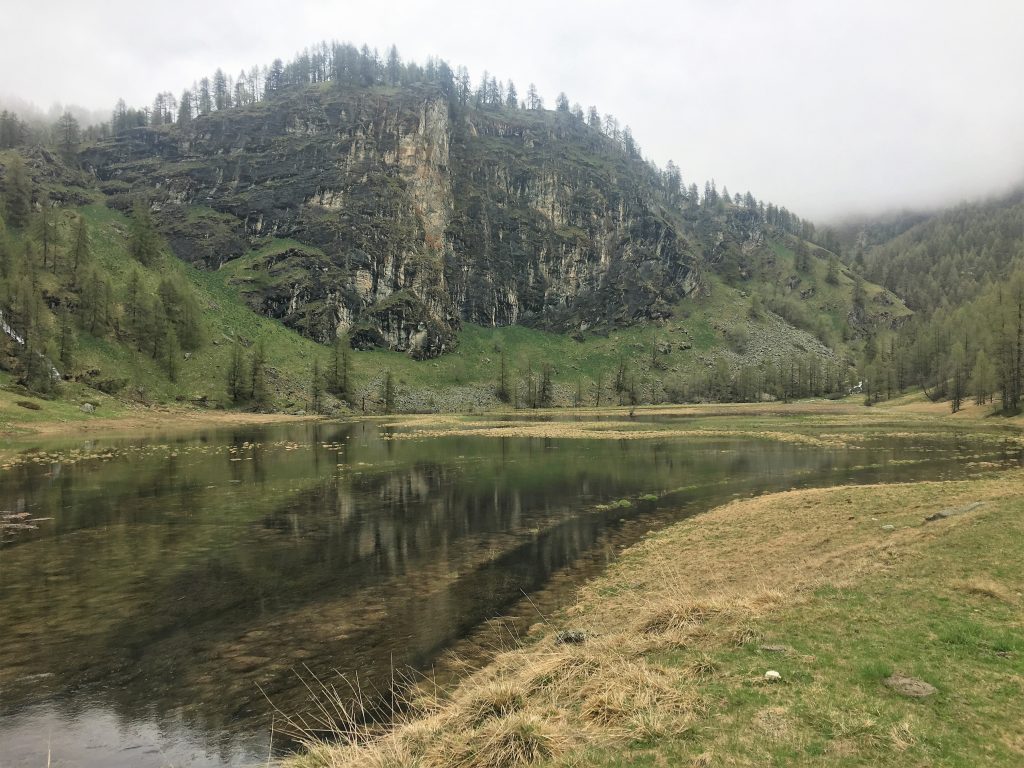 Small lake/marsh area under a crag 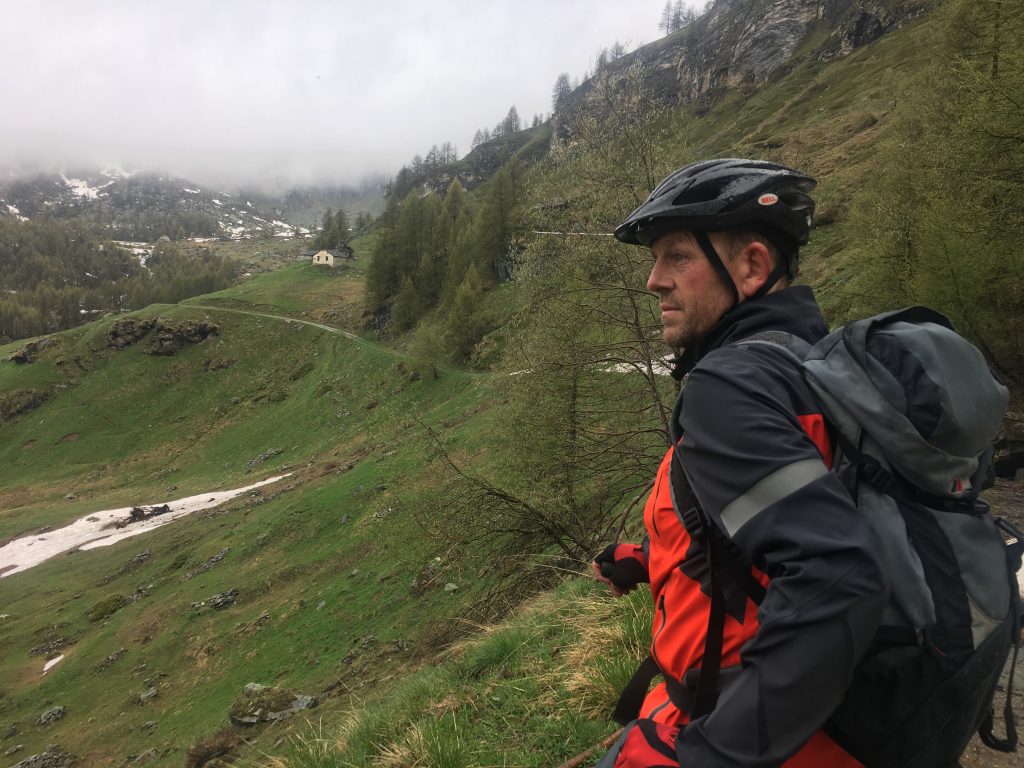 Mist getting lower over our cycle route

The following day the sun came out and we decided to see fi we could tackle the Becca d’Aver which had been teasing us with it’s summit for the last couple of days. We knew we probably wouldn’t make it to the top because we could see a significant amount of snow in the saddle between it and the next peak. We were right, we only got as far as Mont de la Fenêtre before we had to give up due to a ridiculously small patch of snow on a steep section. The route up this far was lovely though (route 8 and then 9 from the ski area) so it wasn’t a wasted walk, the narrow path wound up and around rocky outcrops; one section had a chain as a hand rail, but manufactured rocky steps had been added later making the chain unnecessary. To make up for not reaching the summit we followed the southerly part of route 1 (which we hadn’t followed on the bikes the previous day) through the woods, climbing over trees still bowed or felled by the weight of snow, even though it was now gone. On the way we spotted fleeting glimpses of deer through the trees and one hare running across a meadow below us. 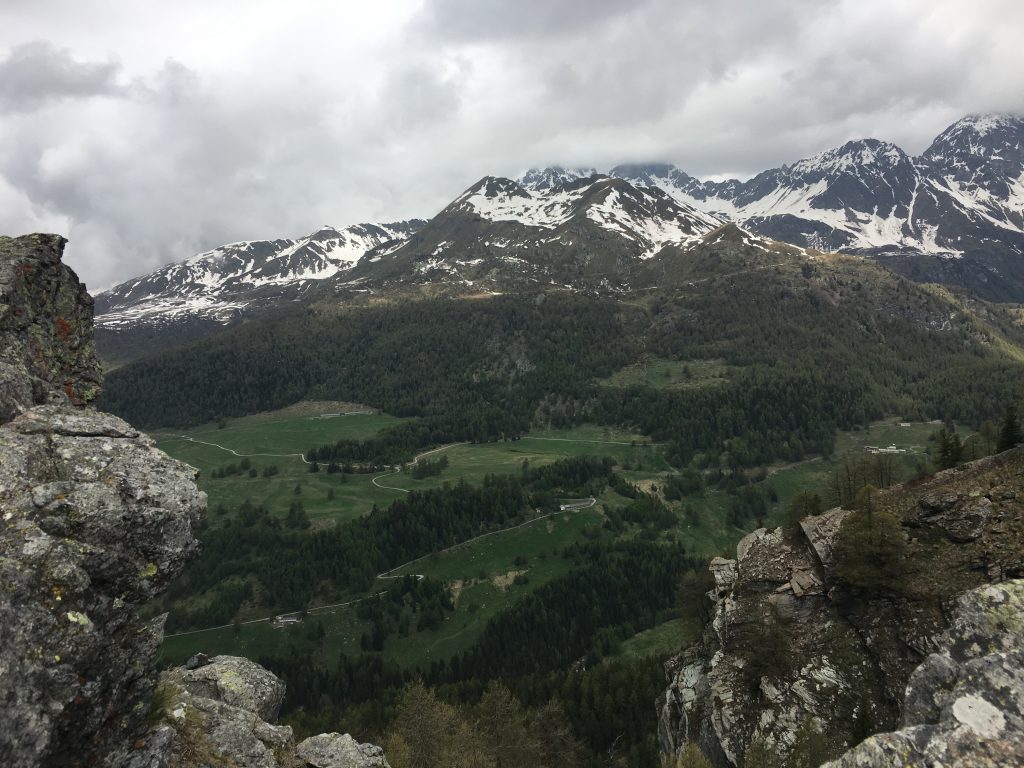 The view from Col Fenetre into the next valley 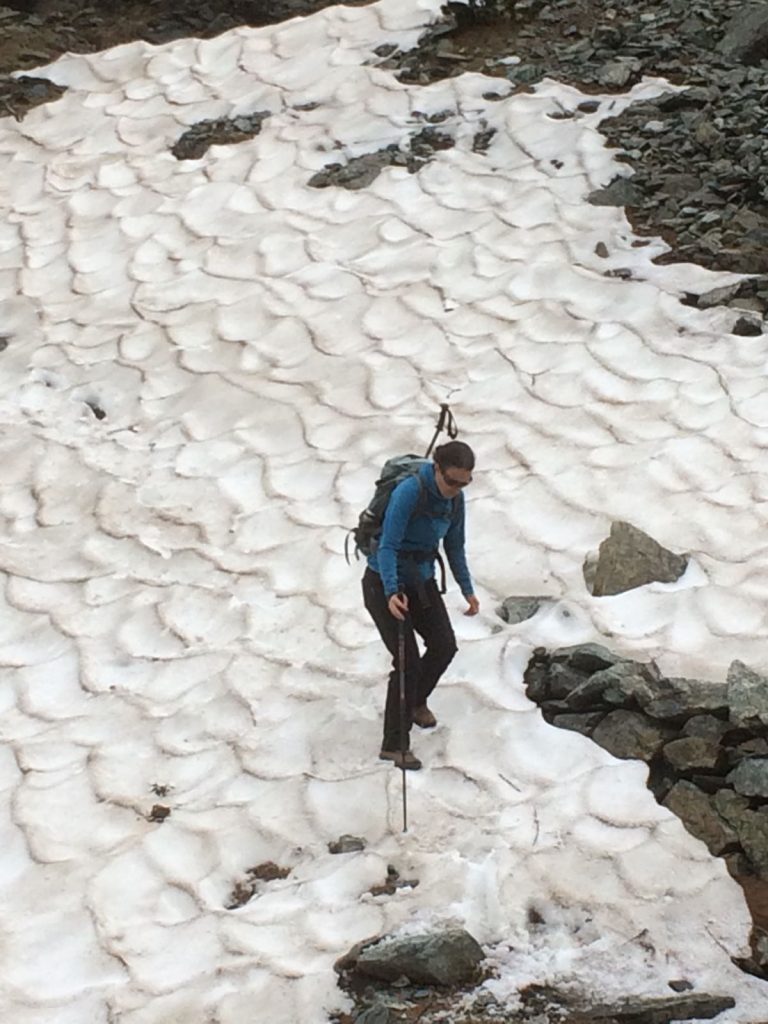 Picking my way down the snow 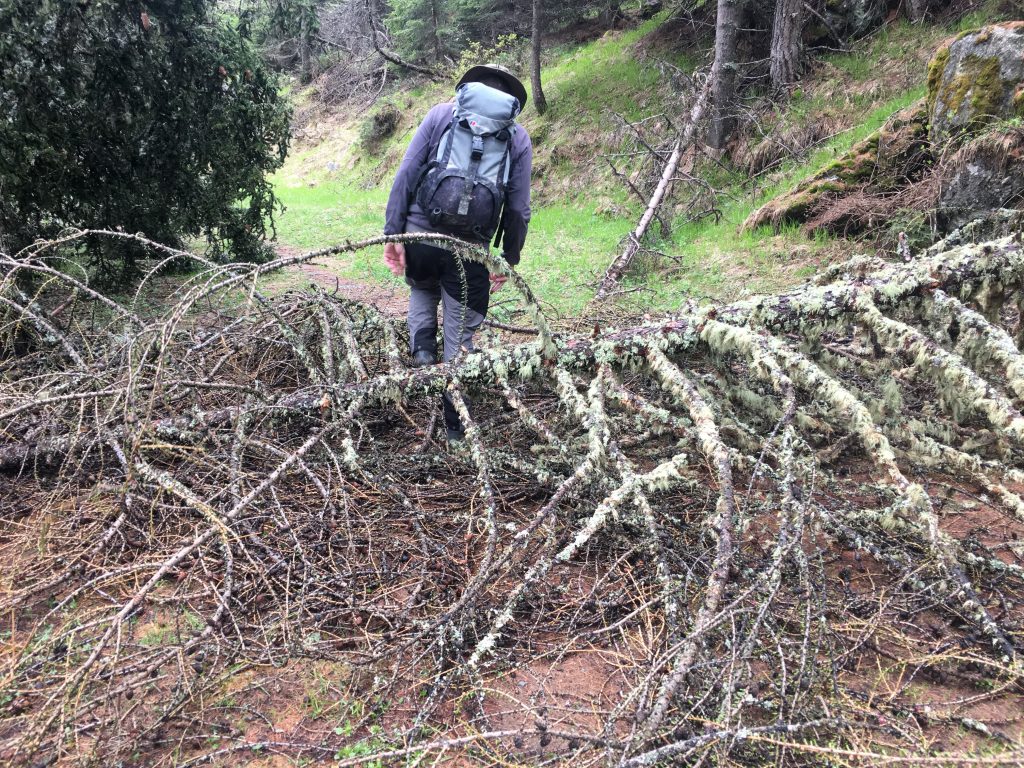 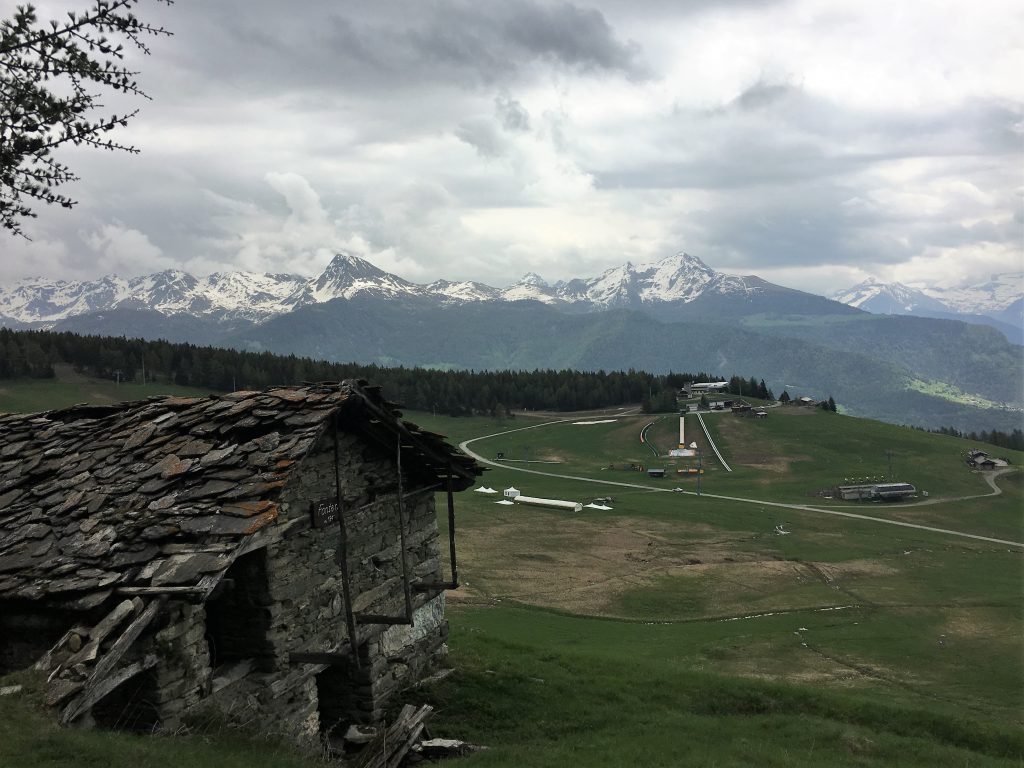 Looking down over the ski resort 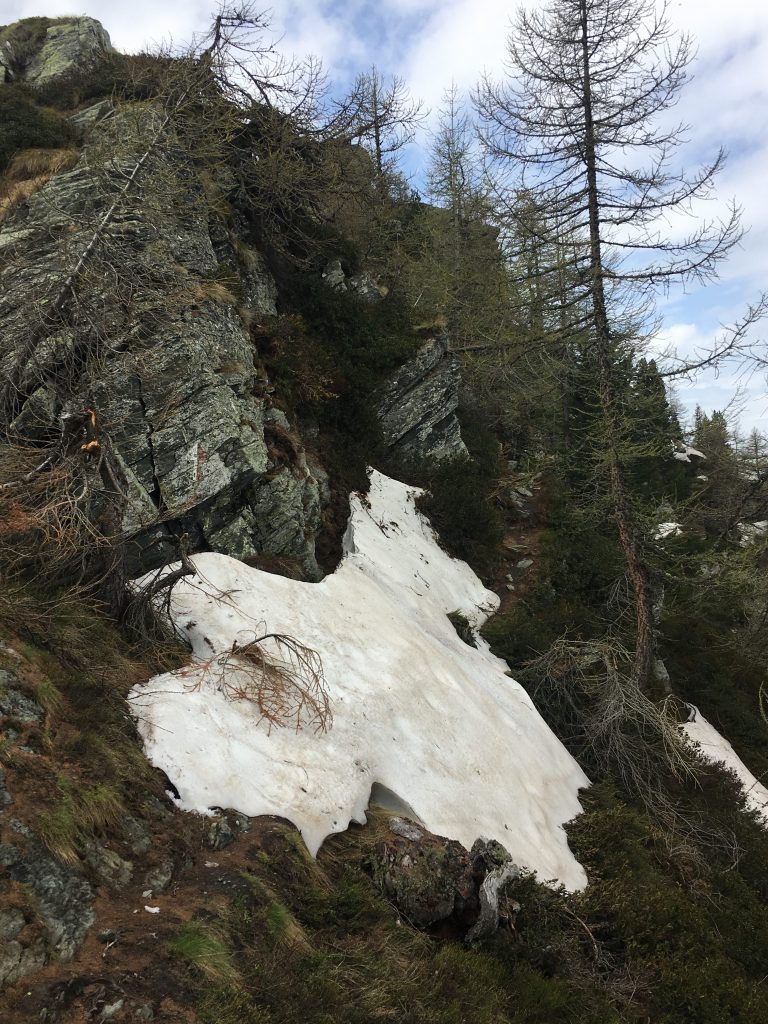 After three nights we felt it was time to move on, a few chores to do first.  We did the usual empty and refill, but also took advantage of the fact that the water here is fed from a spring and so is constantly running through a trough. We used the trough to give our muddy cycling clothes a good scrub and washed down the bikes. How long they will stay clean is anyone’s guess.