While here in Gavarnie I wanted to tackle one of the easier 3000m peaks of the Pyrenees. The Pic du Taillon stands as the highest mountain of the Cirque de Gavarnie at 3144m and doesn’t have anything more technical than a summit scramble to throw at us. When we woke up to changeable skies and blustery winds we considered whether we would attempt the route or not. In the end we decided that we would see how far we got, but we knew it was unlikely we would get very far. Maybe the wind would blow the clouds away, but the cirque was obstinately gathering more cloud so we didn’t get our hopes up.

We drove up to the Col des Tentes, a short drive from our parking spot up past the ski resort. Here a path leads away from the end of the road, surprisingly with a wheelchair accessible initial section, including disabled parking spaces. Once there were plans to build a road link with Spain from here but it seems that it will never be completed. The parking area had several work vans and piles of building materials in one corner and as we arrived a helicopter was landing. I had my heart in my mouth as we watched it being buffeted backwards and forwards by the strong wind before it eventually managed to land and drop off someone wearing hi-vis overalls. It was only when we were part way through our walk that we realised the reason for all the vans. A group of men descended past us carrying their drills and wearing working gear rather than walking kit, they had been working on the Refuge des Sarradets which is being significantly extended. That’s one hell of a commute and if they had a choice I could understand why they might have chosen to descend on foot rather than in the helicopter.

The path from the Col des Tentes is long and quite flat initially. We walked along the edge of the steep sided valley to the border with Spain before turning back and walking along the other side of the valley over increasingly barren and rocky terrain. 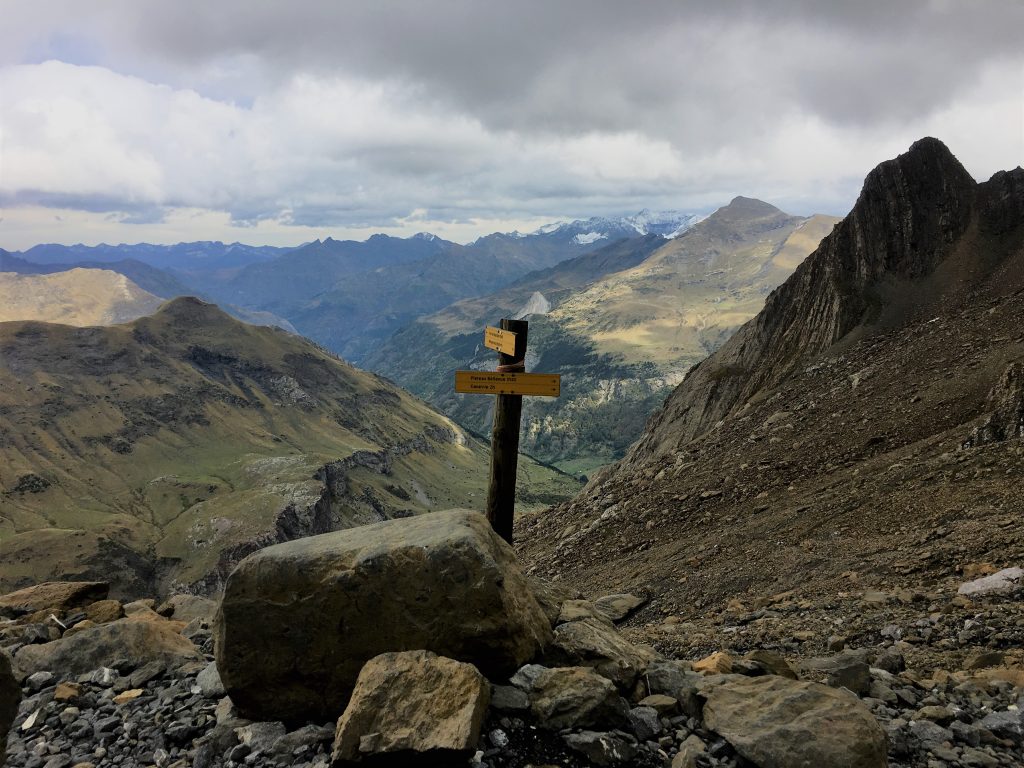 Looking across the border with Spain 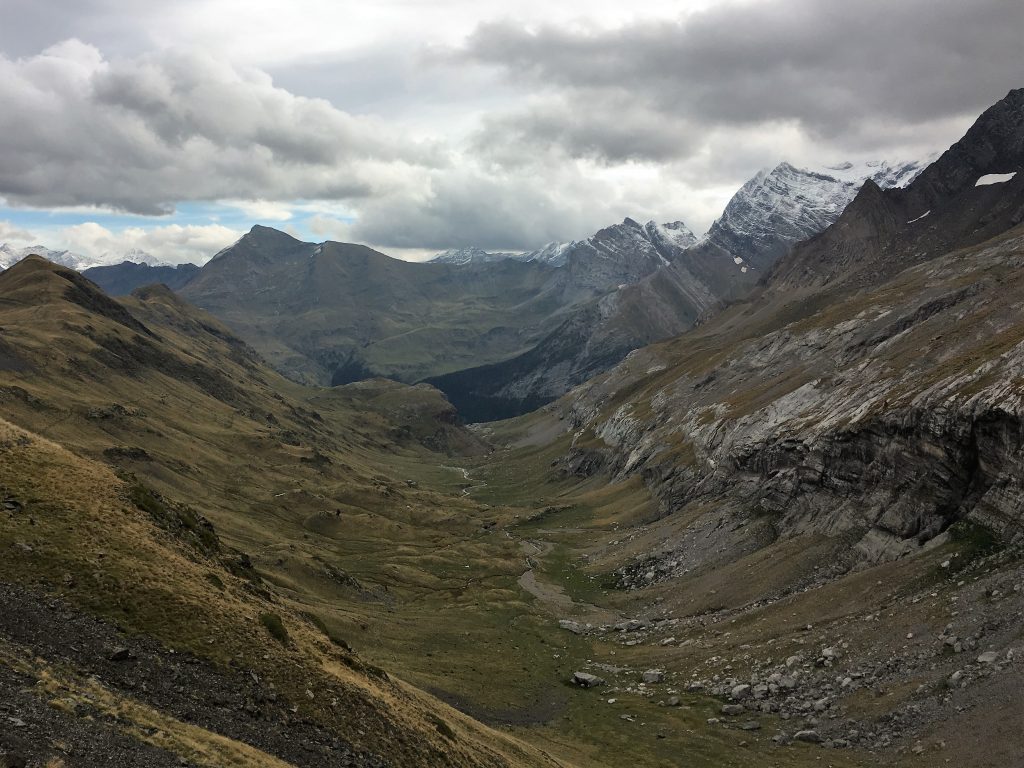 The deep valley at the start oft he walk.

As we looked ahead of us we wondered where the path went to take us out of the valley. As usual the valley walls looked quite steep and impenetrable from a distance, only when you get close up do you see the zig zag route that takes you up through the boulders and eventually to a short almost-scramble up a waterfall. 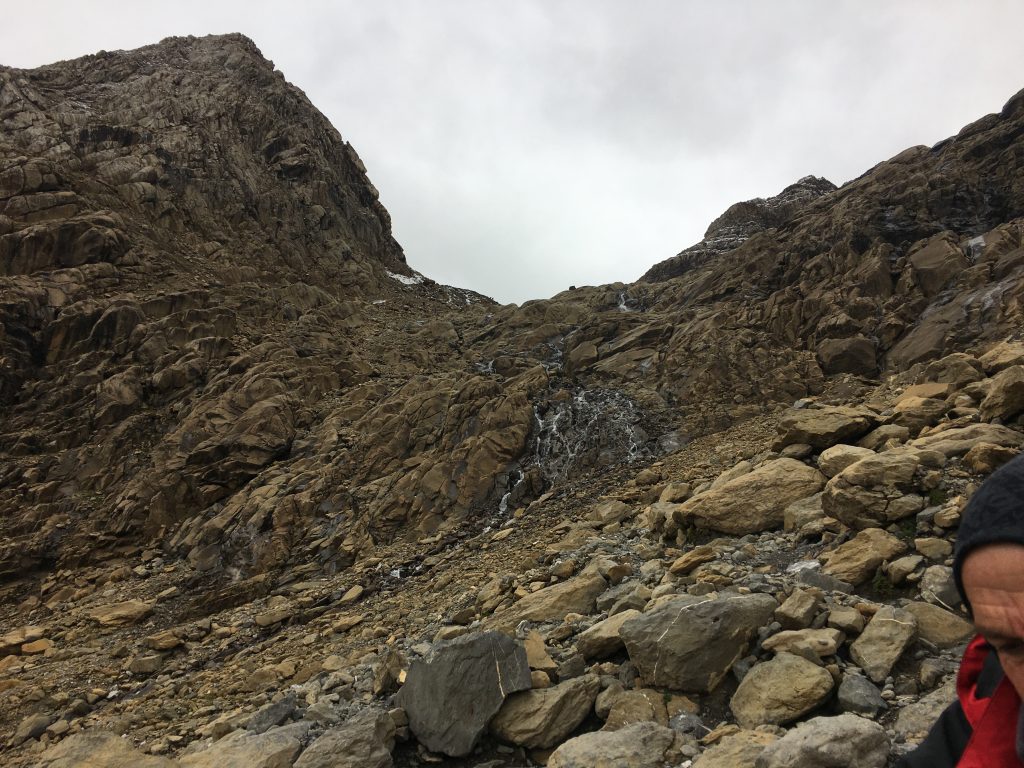 Our path took us up through this waterfall. Not as difficult as it might look though.

Once past the waterfall you are in the upper section of the Cirque de Gavarnie, an area we hadn’t been able to see through the clouds on our walk a couple of days previously. From here we had views of the Grande Cascade as it dived over the edge of the cirque, plus the scaffolded refuge, but we still couldn’t see the top of the mountains. 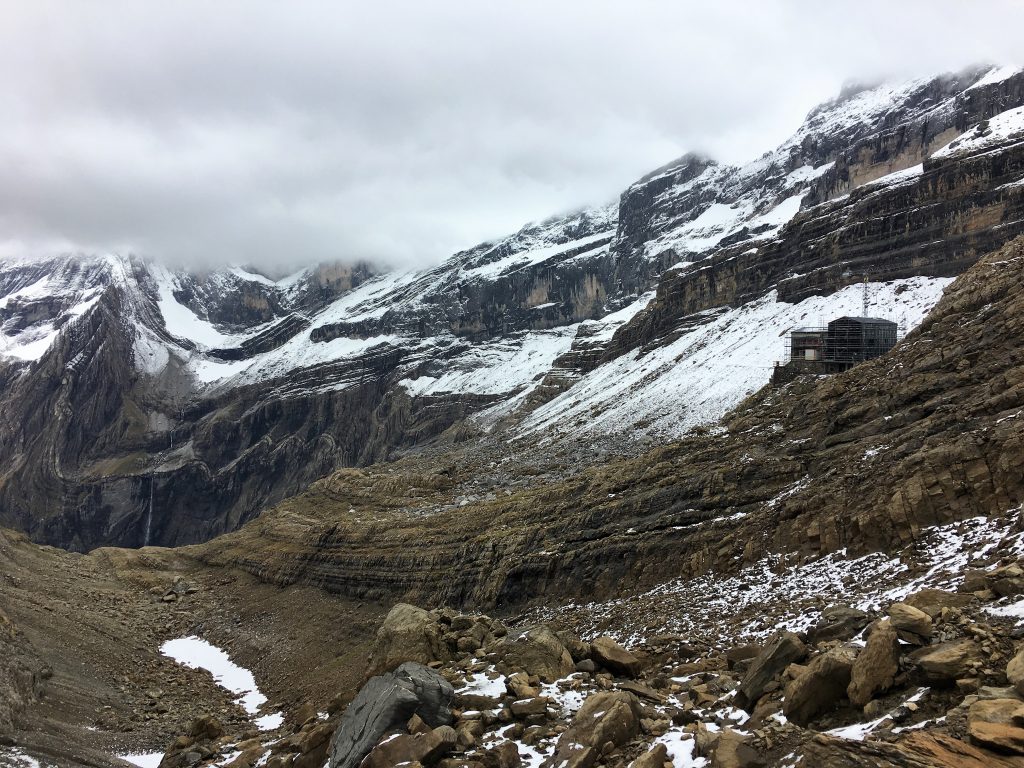 Entering into the top of the Cirque de Garvarnie.

Just barely we could make out La Breche de Roland. Like a missing tooth in the Cirque de Gavarnie’s smile this missing section of rock seems out of place and artificial. Supposedly the breach was created with one blow of the mighty sword Durendal, wielded by Charlemagne’s knight Roland who was the subject of much medieval romance and hyperbole. 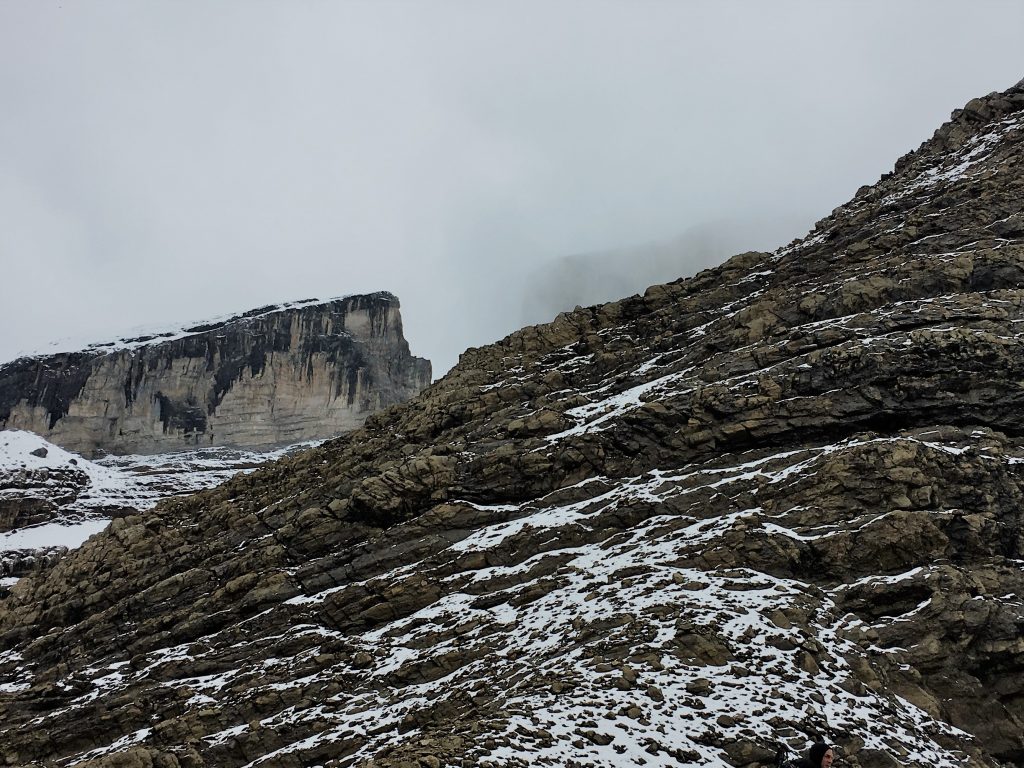 My best picture of the Breche de Roland

The Breche de Roland was as far as we got, an easy but tiring slog up a snow covered slope. The cloud had descended lower and lower, wreathing around us, obscuring any views and occasionally threatening sleety showers. We knew we wouldn’t enjoy going any further, so we retraced our steps back down to Bertie. We’ll be attempting some more 3000m peaks if the weather allows us, but with winter approaching it’s likely that snow will stop us. 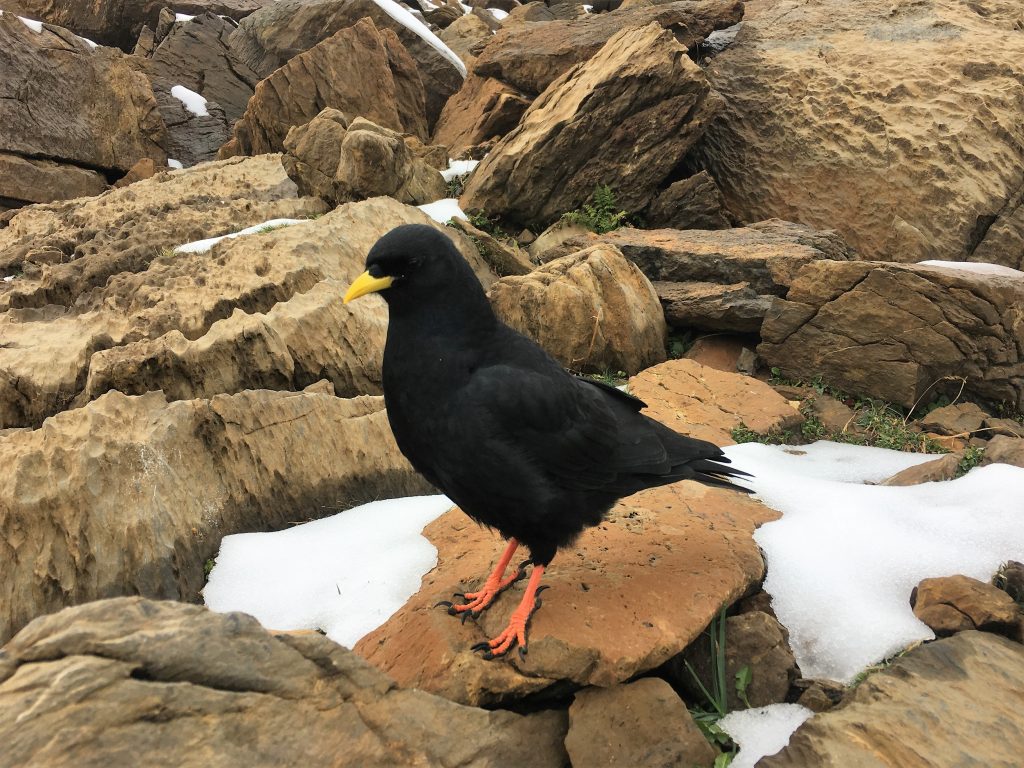 We shared our lunch with this cheeky Alpine Chough, Paul was able to hand feed it. 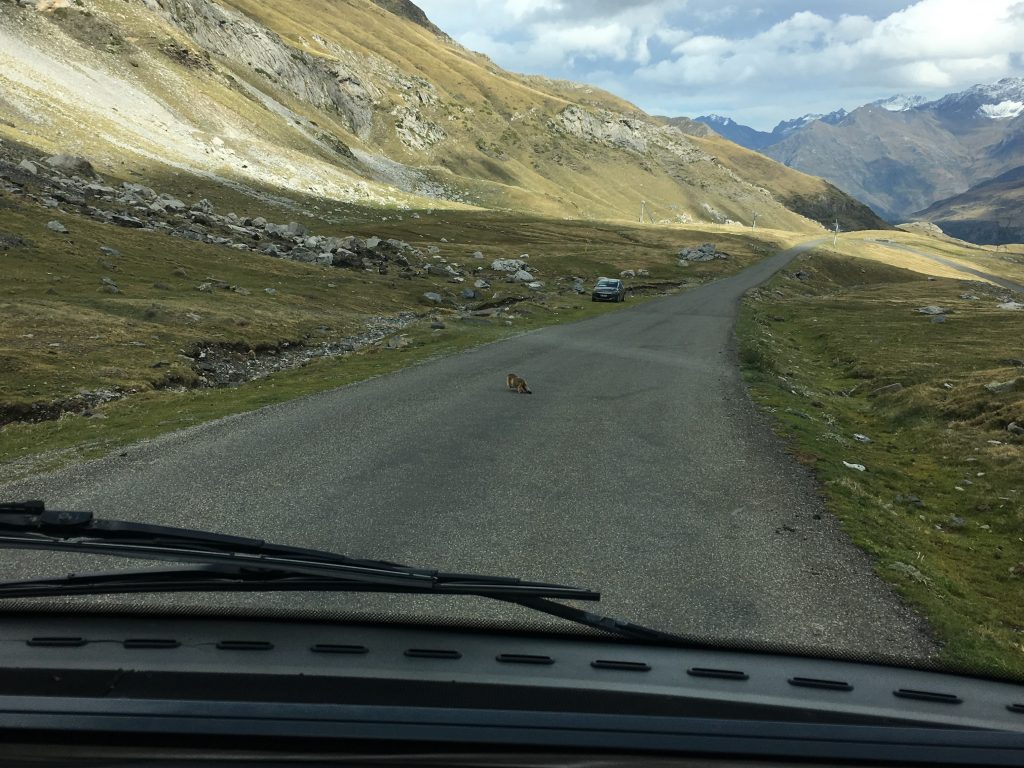 We finally caught sight of a marmot in the Pyrenees. They are a lot harder to see when there is no snow around!

Walking from the Col des Tentes to the Breche de Roland