We left the campsite with a vague promise of better weather from at least one weather app. Our destination was Gavarnie, a tourist honey-pot and probably the most famous part of the Mont Perdu UNESCO world heritage site. The reason for it’s fame is the Cirque de Gavarnie; a spectacular rock amphitheatre that is a draw for hundreds of thousands of people each year.

The popularity of the village is evident as you approach, signs at the side of the road warn you of the parking charges to come – €5 for cars and €8 for motorhomes – the main street of the village is pedestrianised but the surrounding roads are just a mass of parking. It’s all very well organised with well marked spaces, some parking areas with height barriers and some without. There are ticket machines everywhere. No excuse for not paying although we don’t see anyone checking during this quiet off peak time.

Motorhomes are directed up the hill to a nice level aire with the usual facilities. Arriving on a gloomy week day there were very few cars or motorhomes around, but by the time we left the parking was filling up and many motorhomes were parking further down the hill to get better access to the village. I can see why when it’s a good 20 minutes downhill walk to the village from the aire (and half an hour back up again) and pitch black at night. 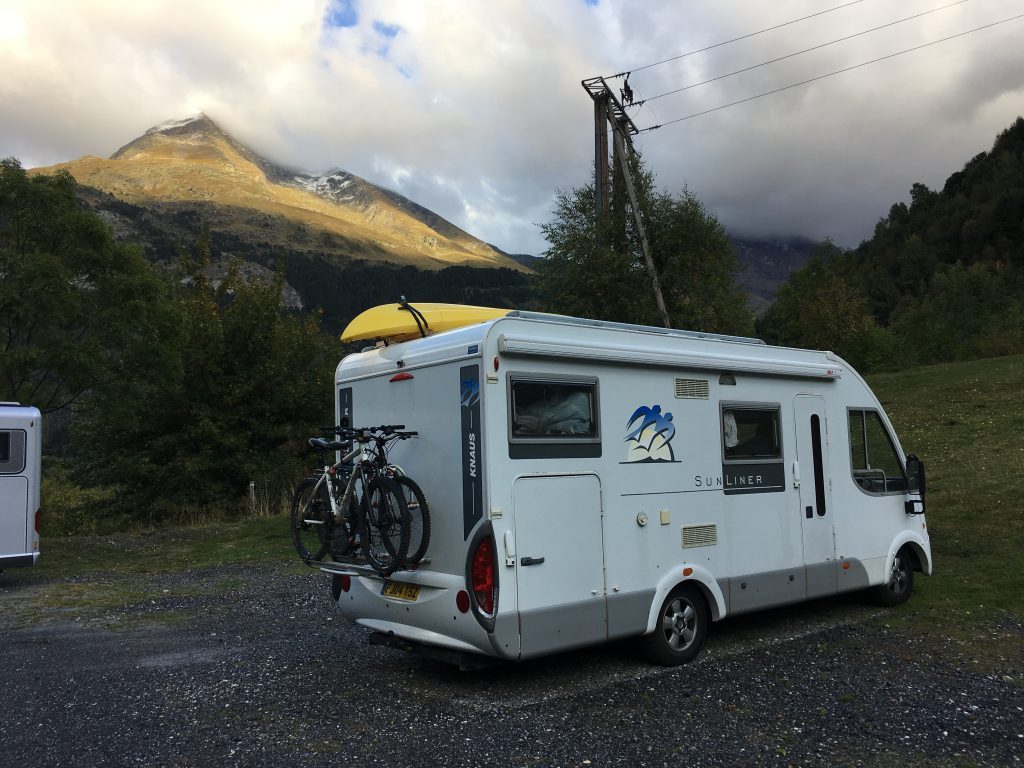 A rare moment of brightness shows off Bertie’s parking spot

When we arrived the weather was dry, even if it was too overcast to see the tops of the mountains. We decided to walk to the Cirque de Gavarnie straight away. A quick look at the map showed that we should be able to follow a path directly from the motorhome parking along the side of the valley, rather than dropping all the way down to the village and then back up again. There was no specific signposting from the motorhome car park, but at the back of the car park there was a small square red mountain biking sign (a stylised picture of a bike made up of two circles and a triangle). It appeared to be pointing in the right direction so we followed the track up and over a small rise and then to the right. Luckily we soon found some national park signs (yellow with black writing) that indicated we were going in the right direction for both the village and the cirque. A little further along the village was signposted going downhill to the left and we carried straight on. Because we weren’t on the main tourist footpath the route was not very well signposted. At junctions the signs often didn’t mention the cirque at all and so we had to use the map and work out which paths we didn’t want to be on. However we made it into the cirque without taking any wrong turns, joining the main path just as it started to ascend to the hotel. 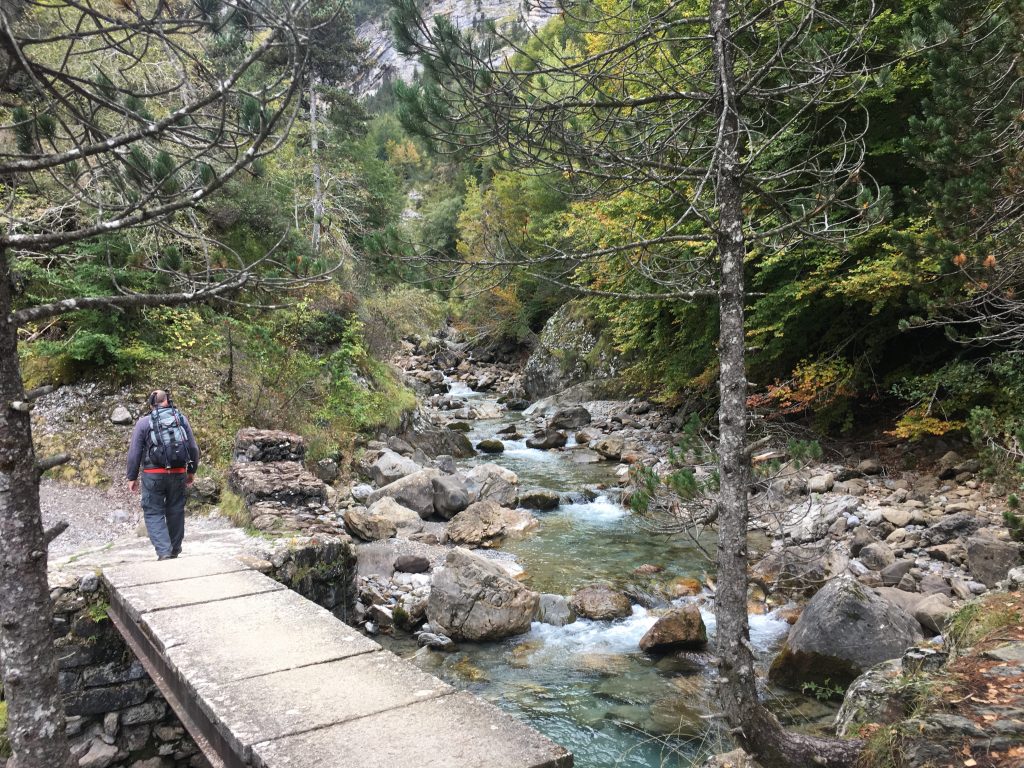 We returned along the wide main track to check out the village. Both routes have their merits; the route from the village gives you views of the cirque all the way whereas the route along the side of the valley is wilder, more rocky and occasionally amongst the trees. Not always such great views but more variety. I think if we did it again we would do it in the opposite direction. 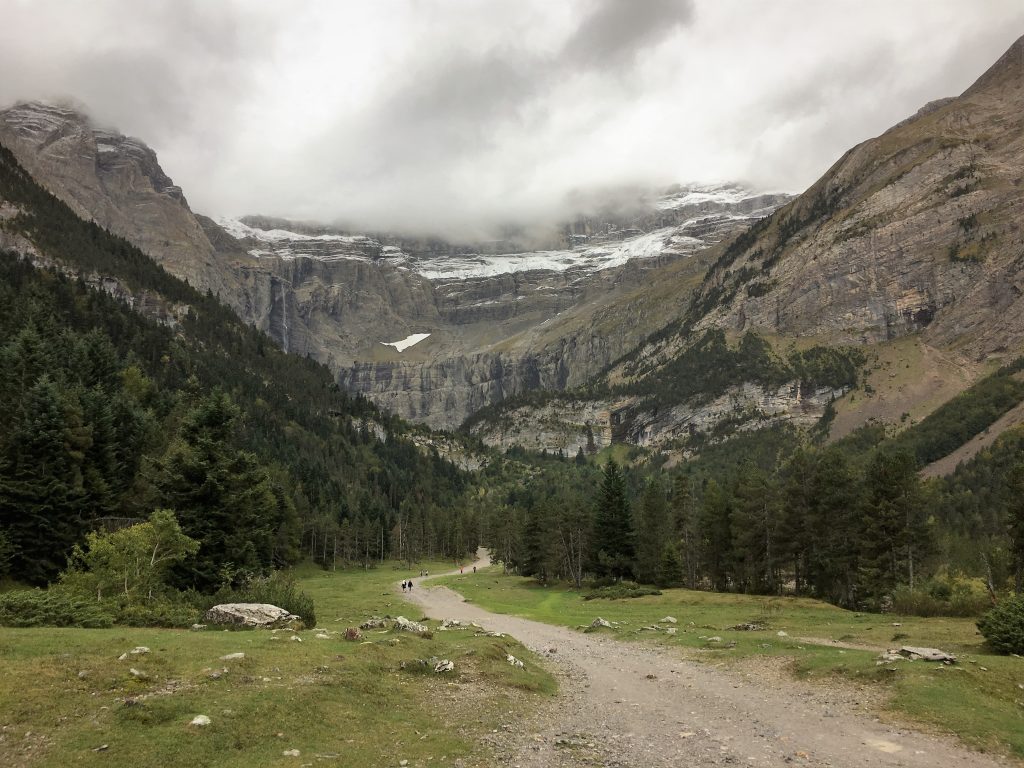 The main track to the cirque has amazing views throughout 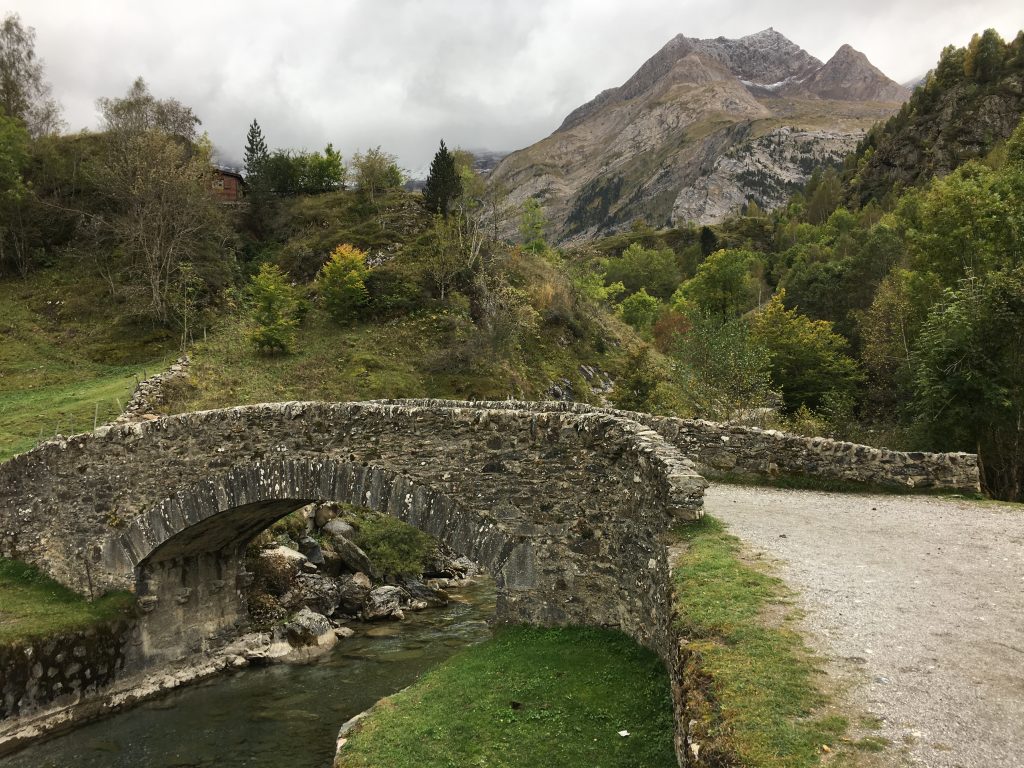 Crossing the river on the path back to the village

From the hotel onwards you are in the cirque itself. We wandered in as far as the base of the waterfall, although we realised that our tiresome slog up the mountain of scree below the waterfall was pretty pointless. There were no better views of either the cirque or the waterfall.

There is no doubt that the Cirque de Gavarnie is a spectacular natural feature. the green grass of the lower slopes leads you in gently, but there is no other way out – the steep limestone walls tower above you in three tiers of neck-aching splendour. I wish we had better weather, but it’s a wonderful sight even covered in a grey blanket. 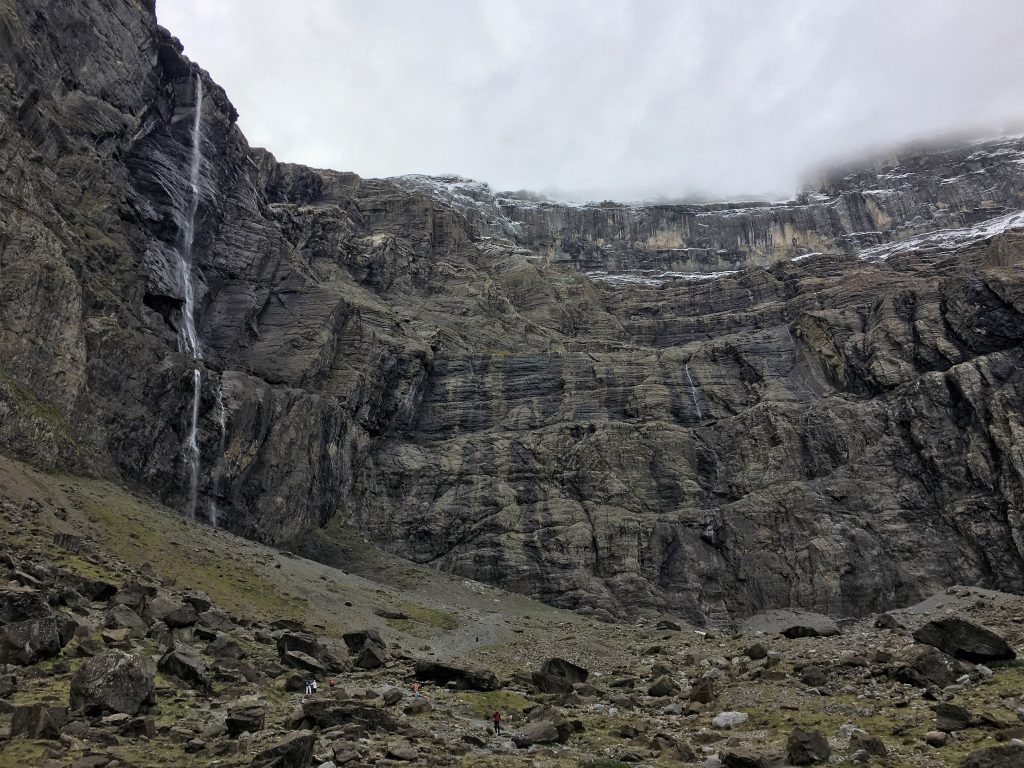 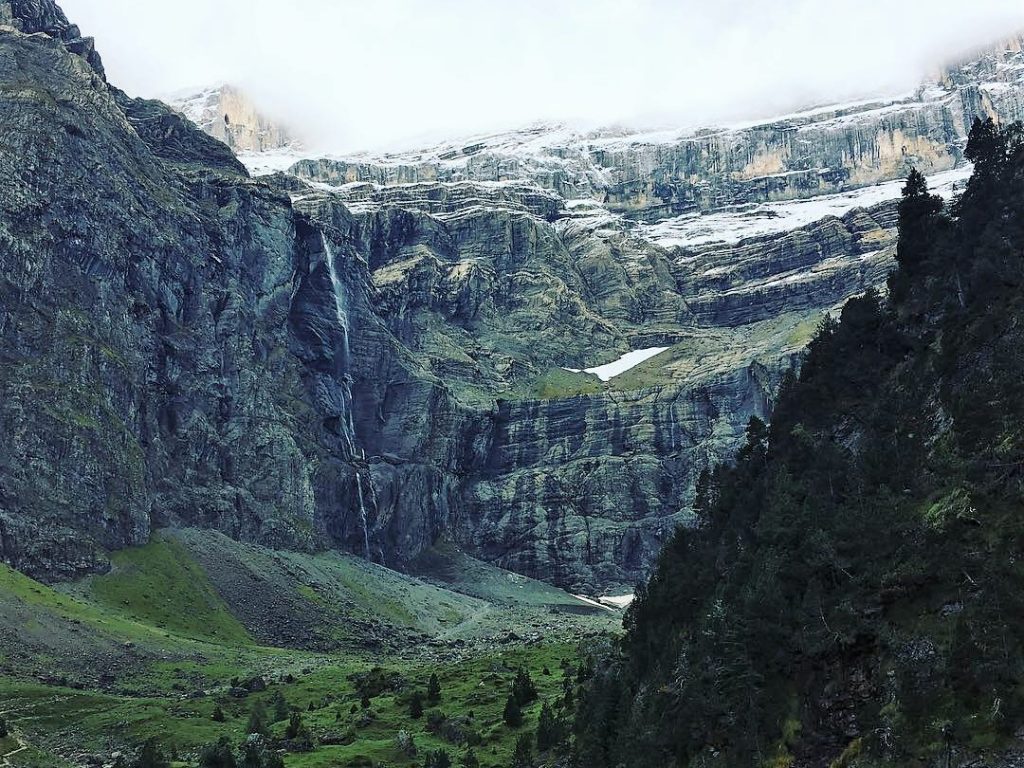 Approaching the cirque from our outbound footpath

Down in the village we dodged horses as we walked down the single main street. We had a peek in the shops that were selling the usual tourist stuff, from fridge magnets to sheepskins. As it was my birthday I treated myself to a new pair of slippers. The soles on my existing pair were slowly falling to bits. We also tried to have lunch somewhere but it was mid afternoon so we had to make do with just a drink. 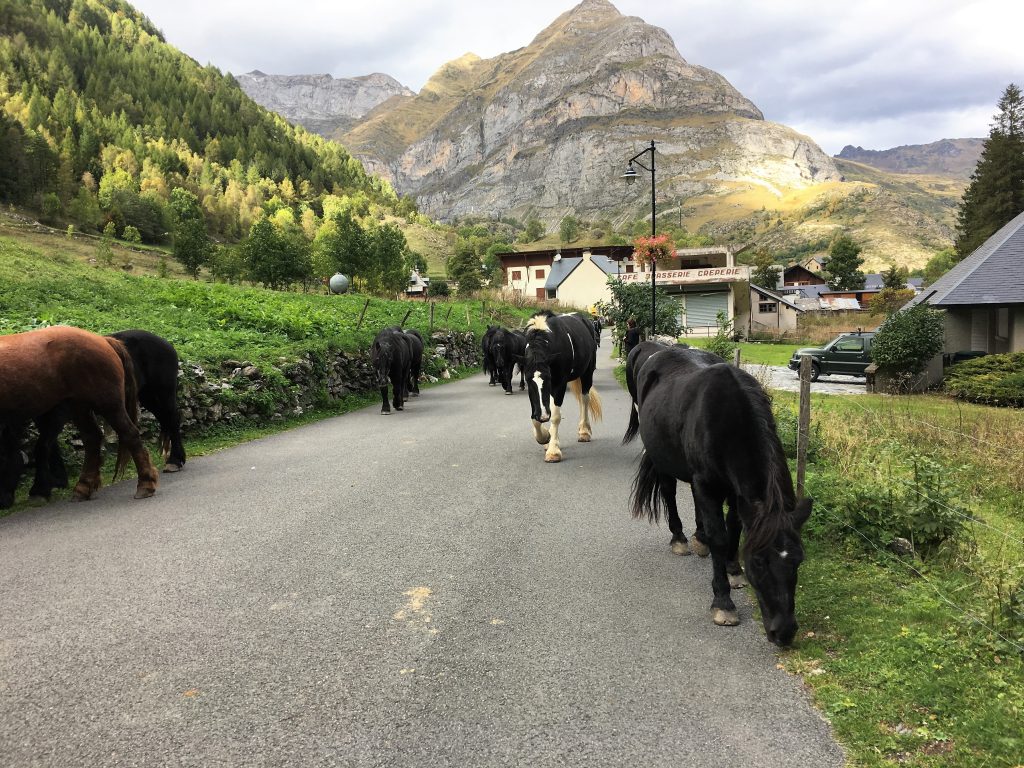 Horses and Donkeys abound, with a trip to the cirque on horseback a quite reasonable 25 euros

The weather brightened in the late afternoon but this spell of good weather only lasted till mid morning the following day. In the morning we cycled down the hill to the tourist office and tried to find a map of the mountain biking routes, but they were being reprinted due to some recent changes. Our plans for a cycle were put on hold as the rain started to fall heavily and we made our way back to Bertie via the bakers.

The rest of the afternoon was spent relaxing and doing odd jobs in Bertie’s dry interior as we crossed our fingers for a better day tomorrow. We fixed the hood of Paul’s waterproof (it seemed appropriate given the weather), having to deconstruct the lining and the channels for the drawstrings before putting it all back together. We were quite pleased with our joint effort, particularly the flexible needle we made with a cable tie to pull the drawcords through into the right positions. Cable ties are one of the things in our toolbox that we wouldn’t be without, but we never envisaged using one in this way.

The temperature was steadily dropping with no sun to warm the air, so at least my new slippers got a good work out. 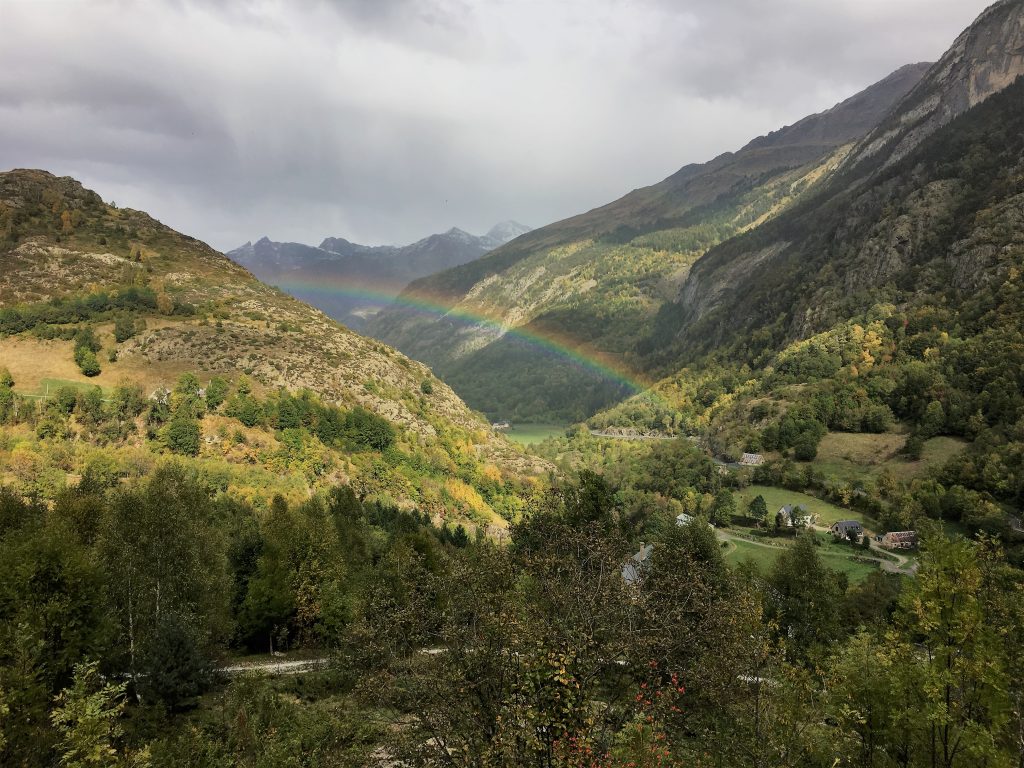 A rainbow over Gavarnie

A circular walk to the Cirque de Gavarnie