If I ever claim that our pastimes are cheap then please feel free to have a word. Of course going for a walk or a bike ride costs nothing but kitting oneself out for walking, cycling and other outdoor stuff comes with a cost.

After our walk on the snowy hills of Andorra we had confirmed something we’d talked about since our spring in the Italian Alps, we want snow shoes! We want a way to extend our walks in snowy conditions of spring and autumn. We aren’t alpinists, we don’t want to scale icy peaks carrying ice-axe and crampons and avalanche transceivers (well maybe we do, but not yet, one step at a time), we just want to be able to walk comfortably in snowy conditions.

We have been researching on and off for a little while and had decided it was actually cheapest to buy snowshoes in the UK. The exchange rate at the moment isn’t great (have you noticed?) and in general the UK offers the best bargains. We hadn’t looked at Andorra though, so we had a look in the El Tarter outdoors shop (not a great selection) and then took a little trip into Andorra la Vella.

An hour of browsing later and we were the proud owners of a pair of middle of the range snowshoes. Not as sexy as the mountaineering ones, but good enough for us and a lot cheaper. A price comparison with the UK showed we had made a tiny saving, but at least we hadn’t spent more.

And while we were there…I just happened to buy a new pair of four season boots. At 12 years old my trusty Scarpa SL boots have had their day and weren’t coping with snow and rocks very well. I was tempted by a pair of last season’s boots but unfortunately they didn’t have them in my size, but then I couldn’t resist the temptation of this season’s boots. Luckily there was a much better saving on these Swiss (but manufactured in Romania) boots. Not that they were cheap!!! 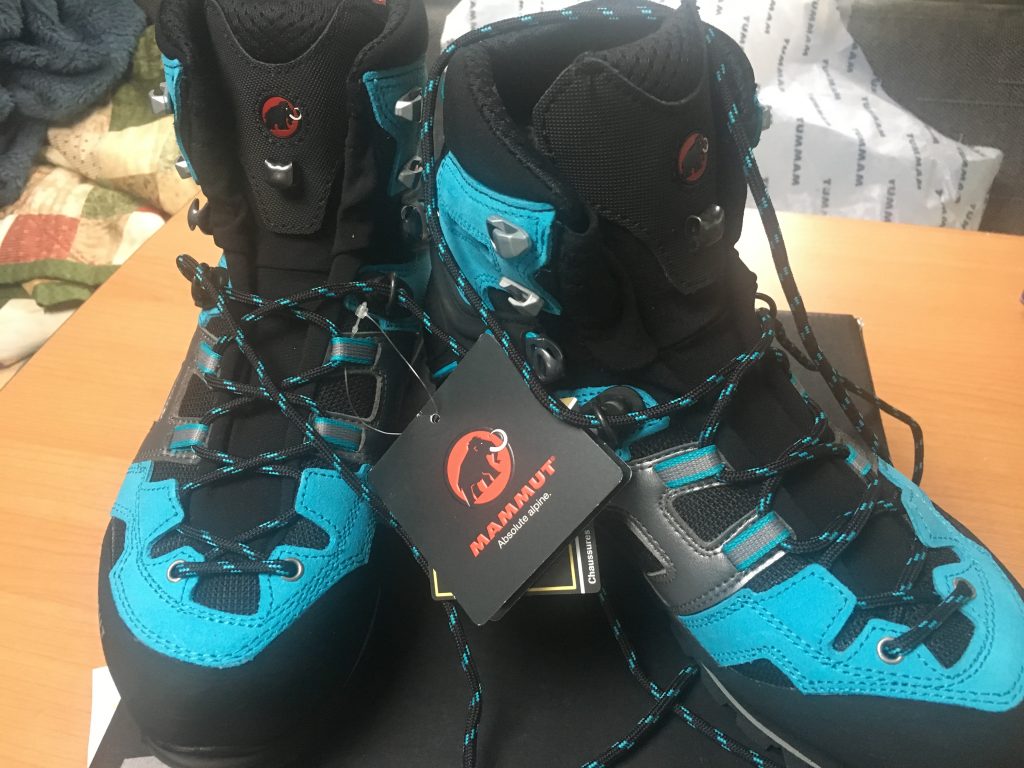 New boots – despite the cost I love them.

Having spent all this money, and feeling slightly ill, I told Paul that we needed to get any duty free bought today. Then it would all be done and I could forget about the massive hole in our budget. A quick trip to the ‘River Centre’ supermarket near Saint Julia de Loria and we were lighter by some more euros (and heaver by a bit more liquid). Luckily the supermarket allows overnight parking and even has services. Without any need to move I could sit and drown my sorrows with a glass or two. It was raining too which accompanied my mood perfectly. Paul decided to make himself busy and useful (avoid my grumpiness) by fixing our sink which had come adrift from it’s housing. 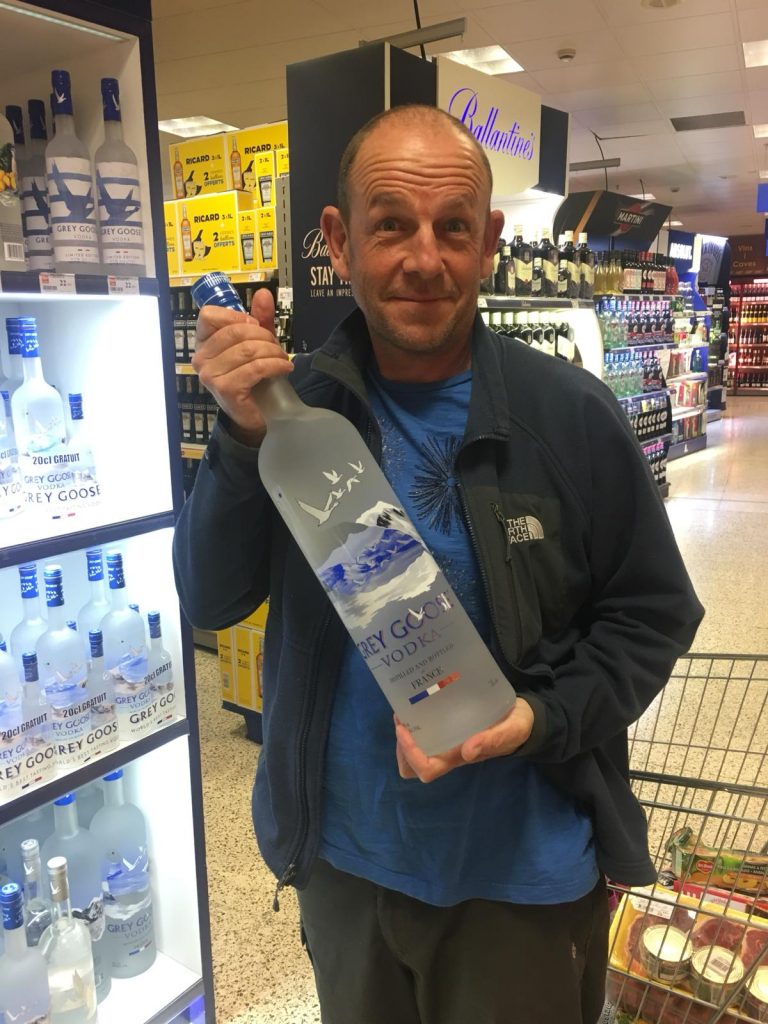 Put down that massive bottle of vodka Paul – or maybe not!

The following morning, spending put behind us, we decided to go and try out our snowshoes. We drove up to Arinsal ski resort where there is a large parking area with lovely views. 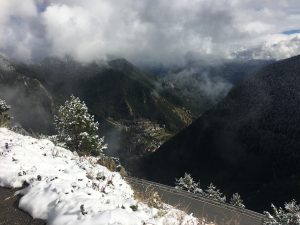 Lovely views through the cloud 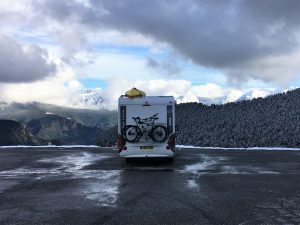 Bertie parked up at Arinsal

First we played with the snowshoes in the warmth of the van, adjusting them to the right size and ensuring that we understood how to get them on and off. The slopes were nicely covered with fresh new snow ready and waiting for us, so once we were confident we made our way outside, the snowshoes initially attached to the sides of our rucksacks. We followed a track up beside the north side of the slopes until the mushy snow and mud combination became fluffy white stuff and then we donned our snowshoes. 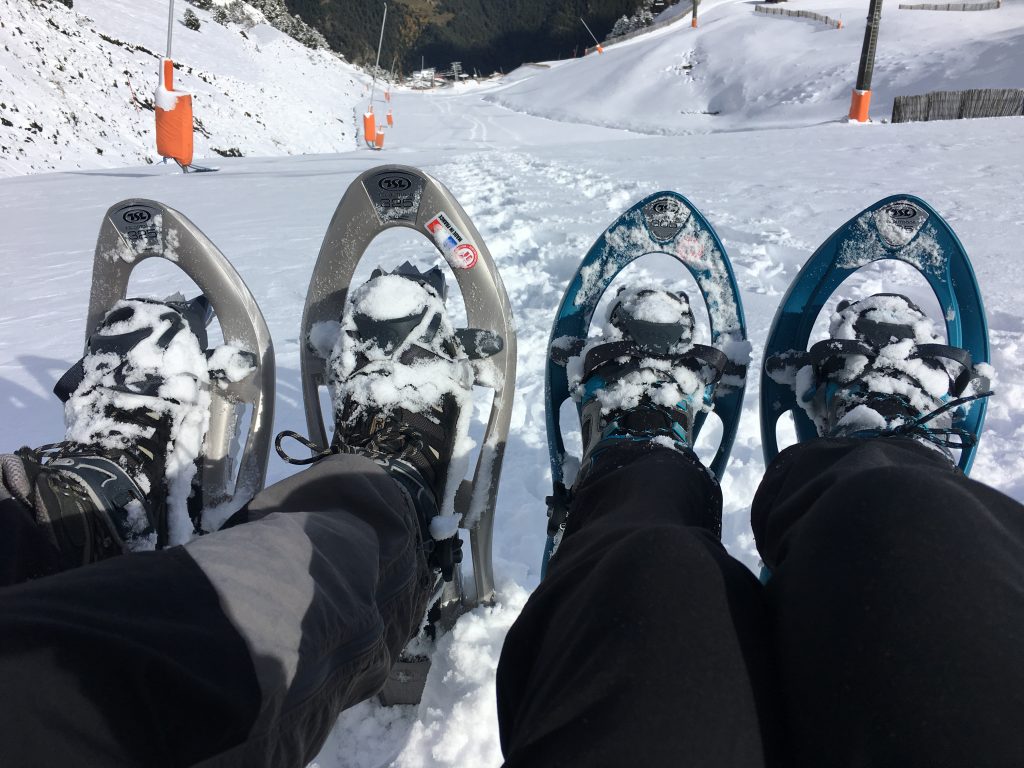 We did a circuit of the main slope, trying out our heel lifts as we walked uphill – a godsend and something I’ve not had when hiring snowshoes in the past, it’s like wearing heels and stops your calves from over straining on uphill walks – and seeing how steep the downhill slopes need to get before our snowshoes started slipping – the crampons underneath were pretty good at gripping the snow. We walked about 6km, so not a lot, but it was a good way to understand the limits of our equipment. We cant wait to try them out for real.