We had a fixed date in the diary for the coming weekend, a rugby match in the town of Castres. Although we’d already been to Bagneres de Luchon we decided that we would make it our midway stop on the way east, we liked the town, it’s easy to get to from the main trunk roads and we knew there was plenty more good walking in the area.

We chose to drive to Luchon by heading North and avoiding the cols we had crossed on the way. Although the drive was mostly on main roads we were avoiding tolls and so still encountered plenty of smaller hilly sections that made it a more ‘interesting’ drive. It was a humid day and although rain was forecast it didn’t arrive until overnight. We were a bit hot and sticky by the time we arrived.

That afternoon we had a wander around Luchon town with the rest of the Sunday afternoon strollers, nosing at the streets of large villas, some of which looked in significant disrepair and other plots where the original house had obviously been demolished to make way for apartment blocks. The demand for smaller holiday flats obviously greater than any demand for a holiday mansion.

We spent the night in the Luchon aire before making our way up to the Hospice de France. We had been somewhat concerned about driving up here as the reviews on Park4Night made it seem narrow and steep, but actually the road was good and wide enough for us to pass farm vehicles coming the other way. There is a traffic management system in place too, a board displays the times at which you are allowed to either ascend or descend although at this time of year the farm and forestry vehicles didn’t seem to be paying it any mind. 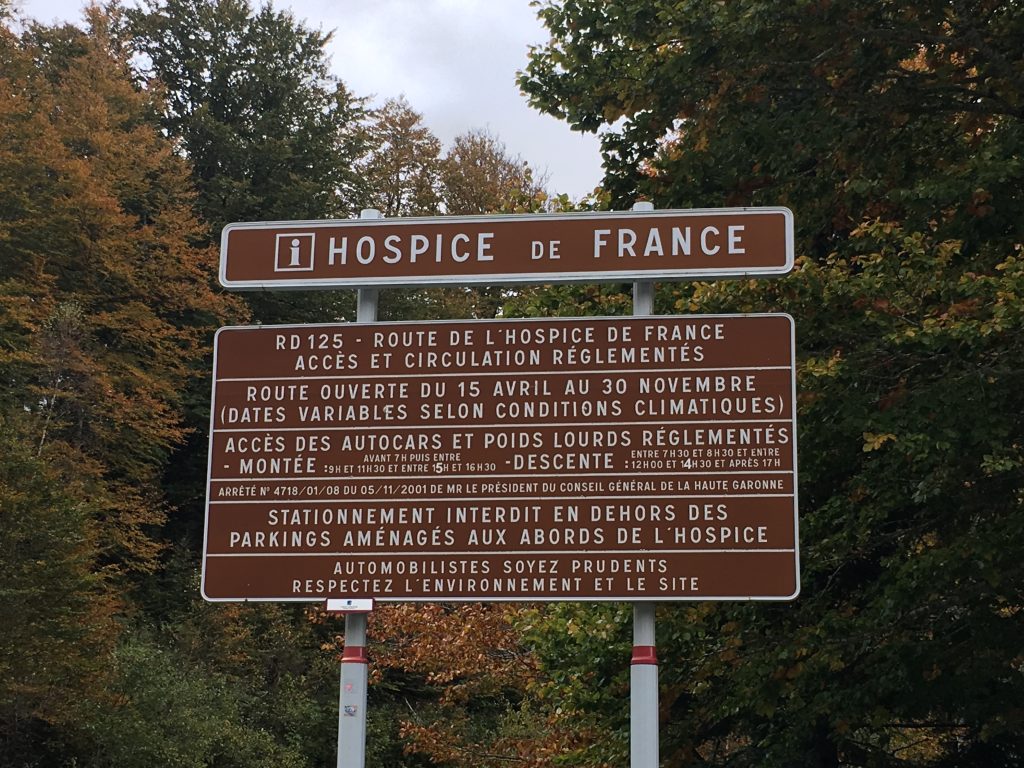 Once at the top there is a large, slightly sloping, tarmac parking area with a couple of more level gravelled terraces beyond. The parking is enfolded by the mountains forming a beautiful vista of deep cut valleys and snow capped peaks and the refuge is open serving drinks and (I think) food as well as providing overnight accommodation to hikers. A pair of donkeys made their presence known to us by nuzzling up to the van. Soft hearted Paul (yes really) got the carrots out to give them a treat. 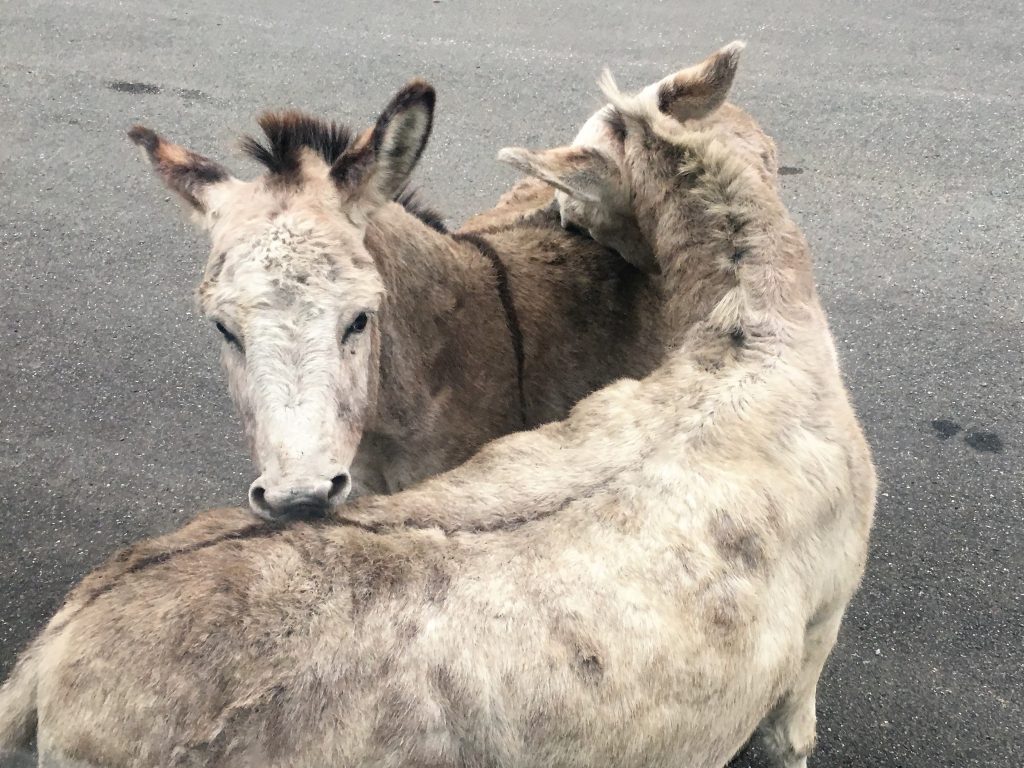 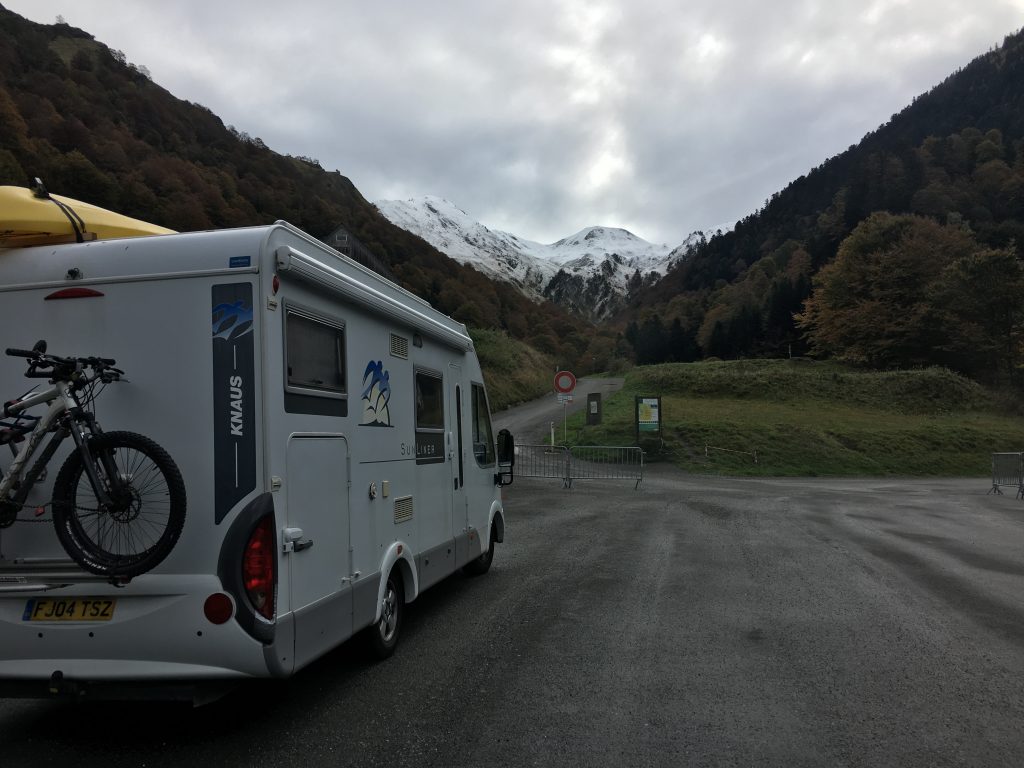 Our parking spot for the night

Several walking paths branch out from the parking area and we decided to do a shortish walk that afternoon, we wanted to see what altitude the snow started at to prepare us for a longer walk the following day so we headed up to the Pas de Roumigau on the border with Spain. The hills we were walking into, on the east side of the valley, were surprisingly rounded, reminding us of the Yorkshire dales. But the route up to them out of the valley was steep work. 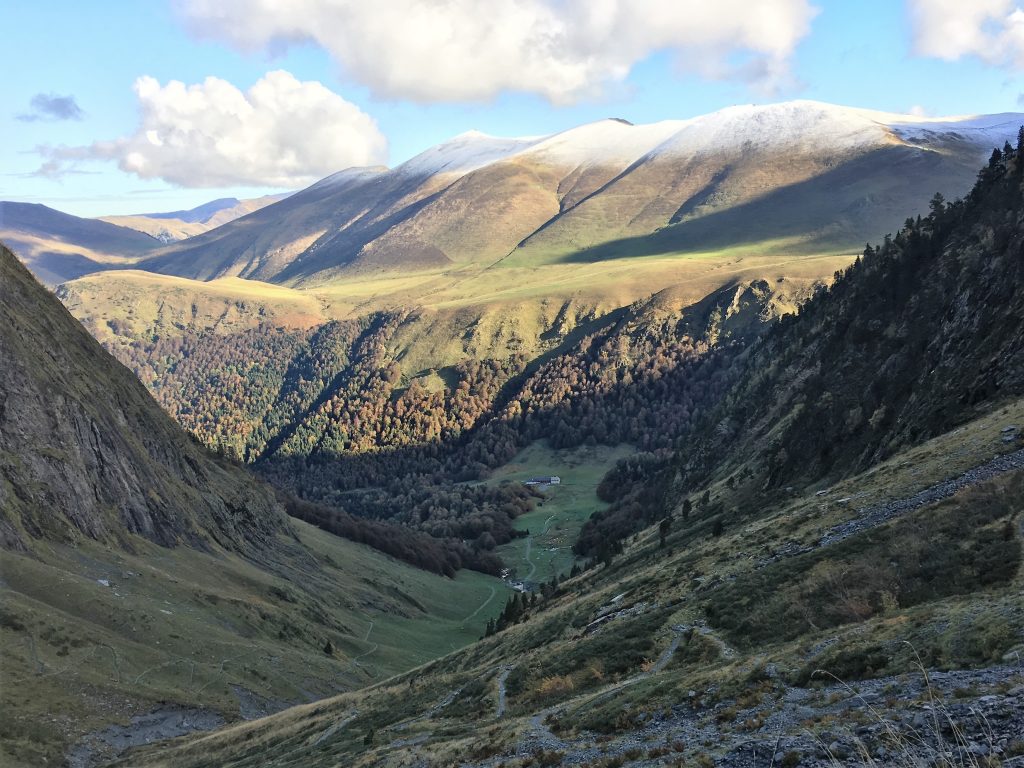 Eventually we exited the valley, passing a right hand turn that would be our return route the following day and then going straight over a crossroads with a farm track, walking into the snowy valley and over the border with Spain. 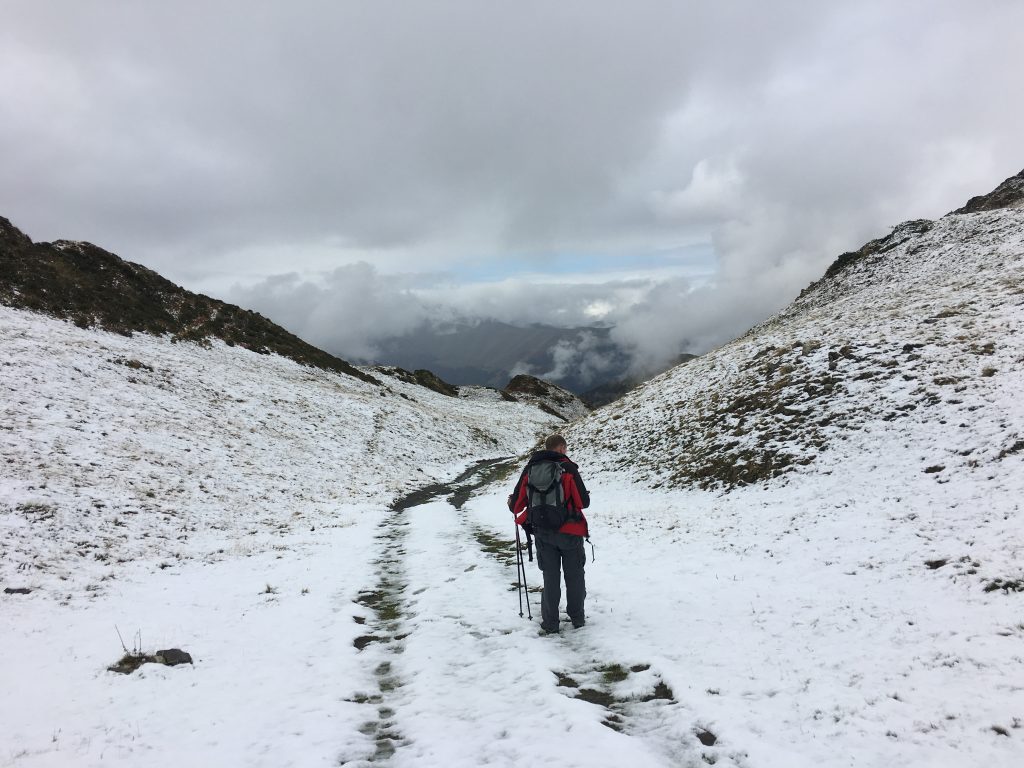 The snow started at about 1800m and we enjoyed our walk through the white stuff, spotting an highly visible fox darting across the snow, before finally returning to the crossroads where we turned north along the farm track – The Chemin de Louise – to the Plateau de Campsaure. This track took us between large herds of sheep and a few cattle before coming to a shepherds cottage and then circling down into the pine forest. The track bought us into the lowest levels of the car park, walking past mountain biking route signs which only served to frustrate us. 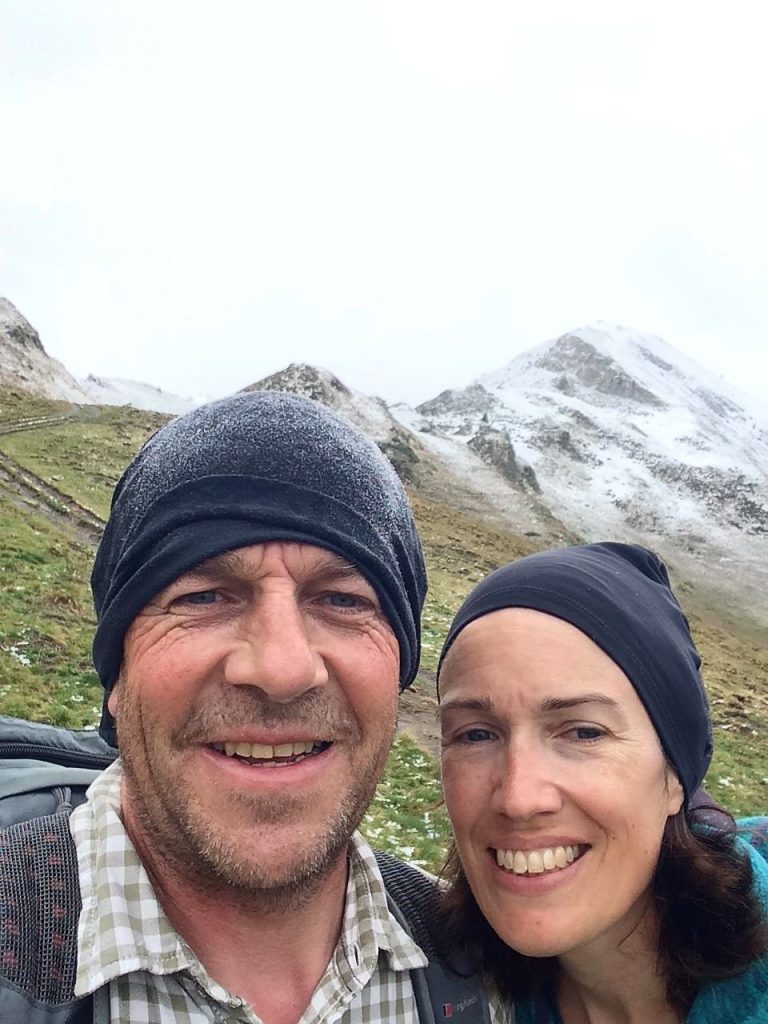 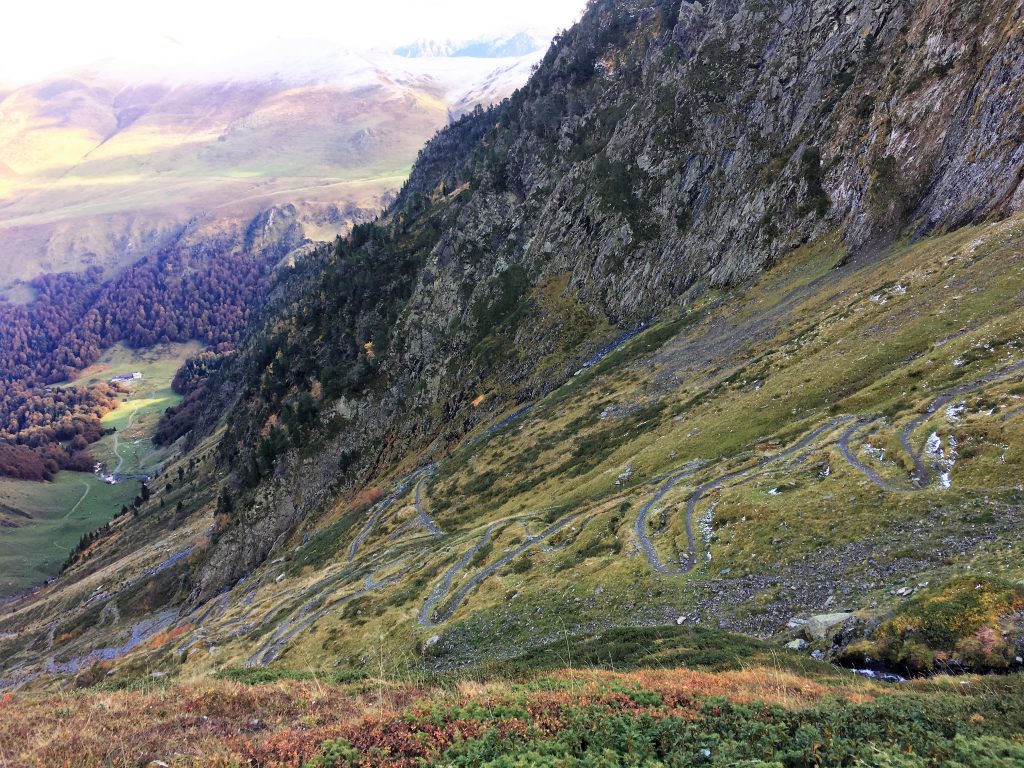 So many zig zags on the steep ascent

The way up was clearly signposted and easy to follow, a series of multiple zig zags up through several false summits in the Venasque valley. When we hit the snowline we were nearly at the end of the zig zags and into the hanging valley where the refuge was sited next to a number of small lakes. We stopped here to take stock of the situation, could we see our path ahead? and did we think the next 200m of ascent would be a problem for us. The path skirted the left side of the lakes and climbed up rocky steps. The path had been trodden by a few people ahead of us and looked easy enough to navigate, the rocky steps were covered with a layer of crunchy snow and a little slippery underfoot but not too exposed. 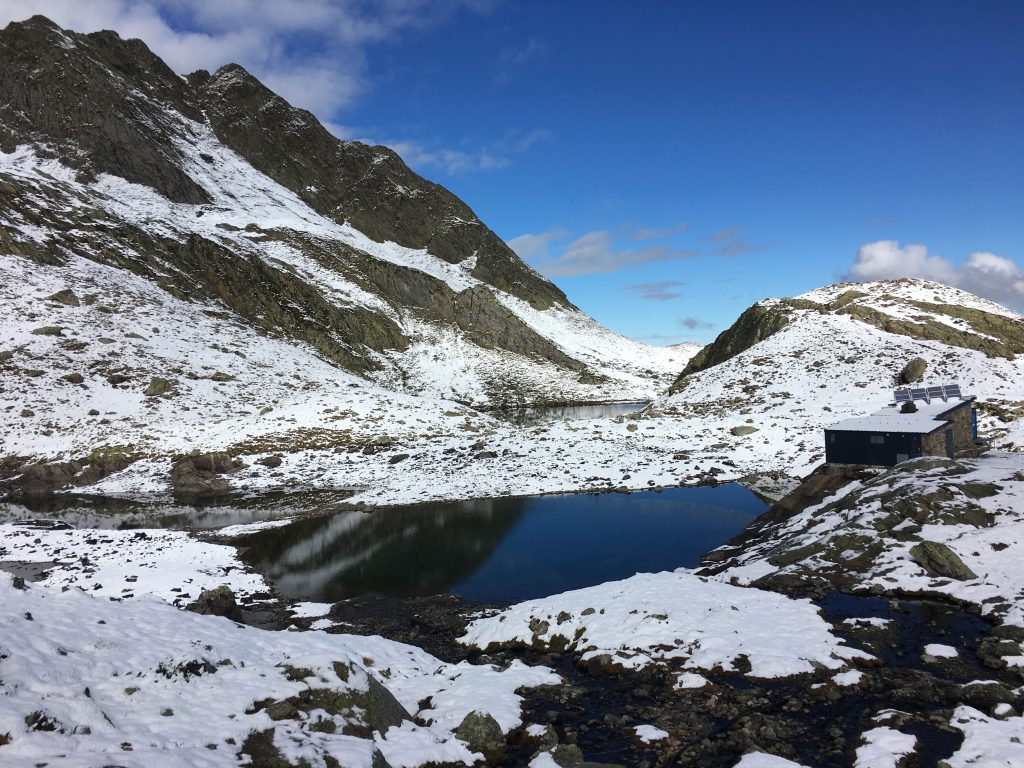 We finally made it up to the Port; this doorway to Spain has been used for many years as a crossing between the two countries and a defensive position at times of conflict, views from here back into France and down into Spain are pretty awesome. 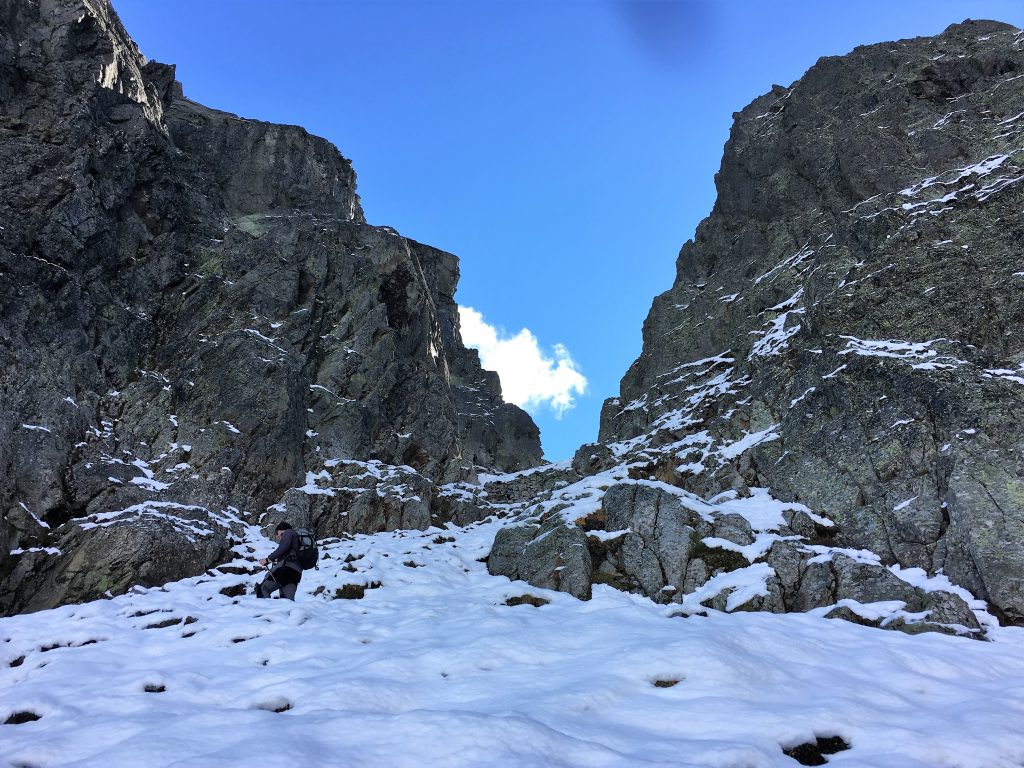 A short descent from the Port de Venasque into Spain allowed us to pick up the path that follows the border. The sun on this south side of the mountains made the snow slushy and our feet were skidding around. Walking poles helped us keep our footing but both of us ended on our bottoms at some point as we took over-confident strides, luckily the path here is not exposed or steep. Paul was down to his t-shirt in the strong sun that bounced off the snow and reflected onto us from all angles. 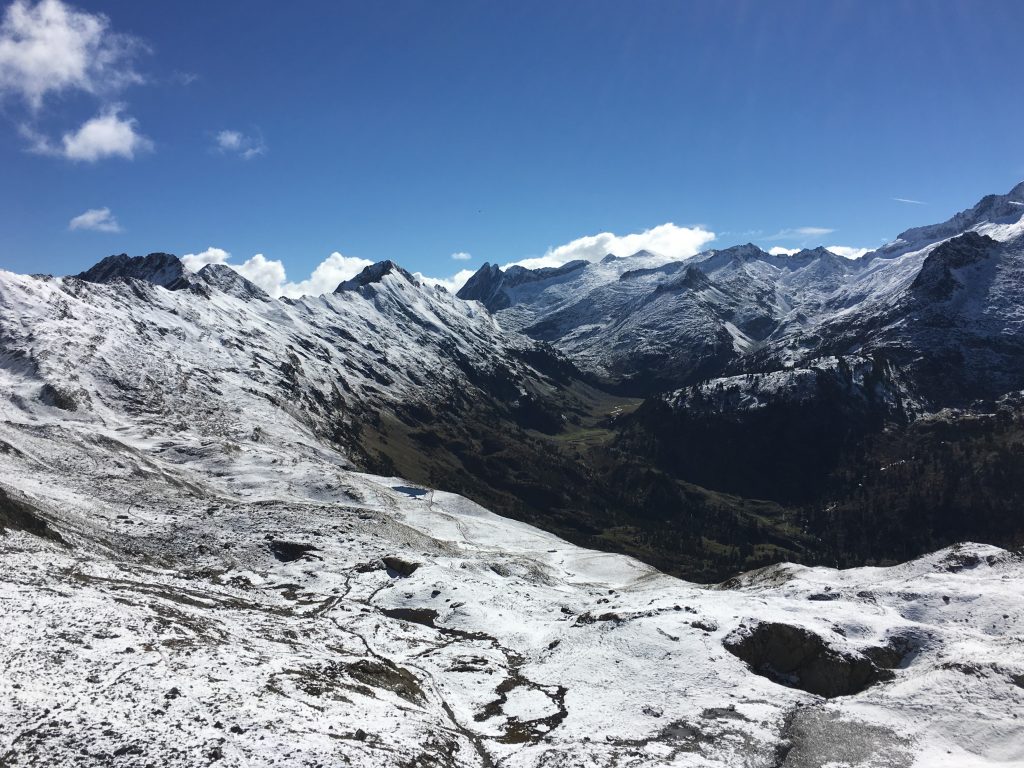 The view down into the Spanish side of the pass

A short ascent back up to the border took us to the Pas de l’Esacalle, a less dramatic entry into France than the Port but still with amazing views. From here we could have taken a route straight down through the valley, but we preferred the look of the ridge walk along the Crete de Crabides which didn’t have so much steep descent in the snow. 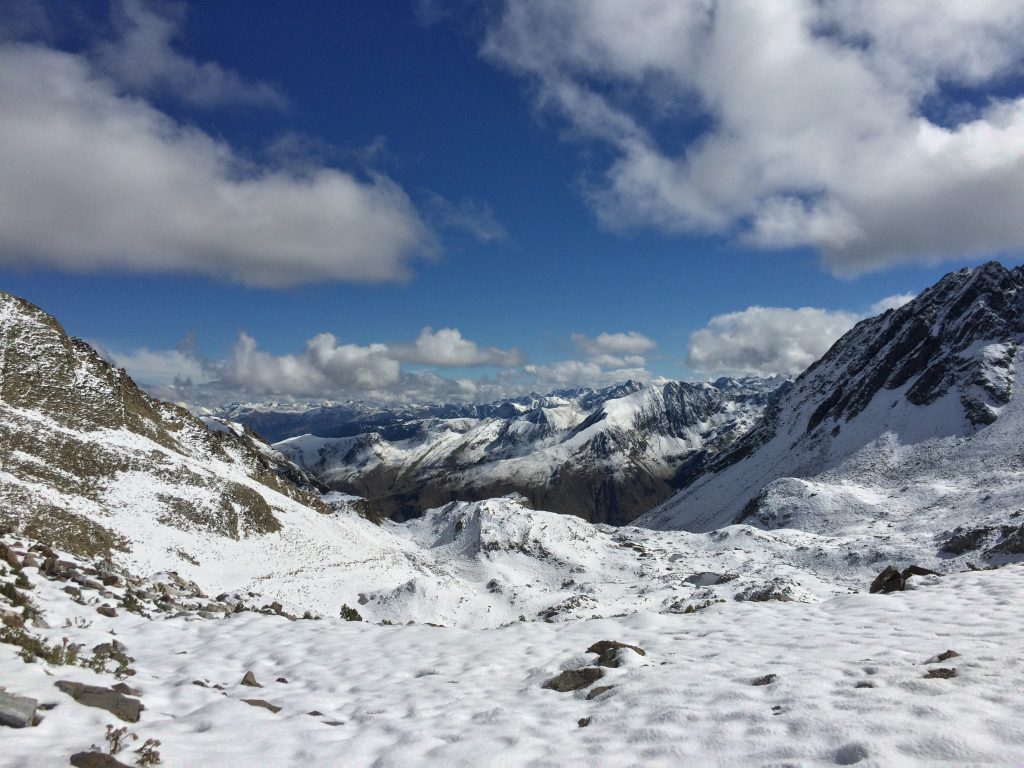 The near and distant views on our return were awesome

Finally we were back on the path we had followed the day before and heading into the valley. We decided to drive back down to Bagneres de Luchon that evening to warm up a little. We’d had a couple of tiring but incredibly satisfying walking days and were looking forward to our weekend. 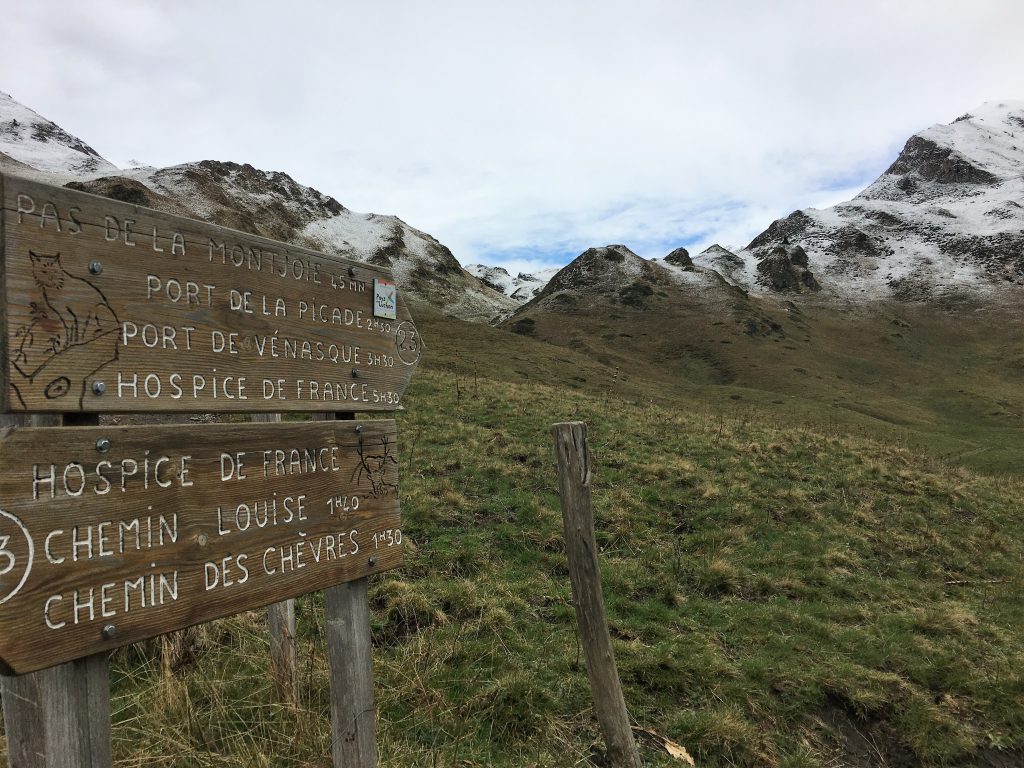 Good signposting on the walk