We’d had plans for the August bank holiday weekend, but at the last minute they were cancelled. Good old Covid again.

So we had to scrabble around for somewhere that could take a few of us over the busy holiday. And it had to be somewhere a group of us could agree on. A few options were passed back and forth but eventually we had to compromise, and the compromise was Brean.

We consoled ourselves with the thought that the company was what mattered as we drove to holiday resort on the Bristol Channel. Having spent my childhood nearby I’ve developed an antipathy towards the holiday camp atmosphere of Brean and nearby Weston-Super-Mare. It brings back memories of vast stretches of muddy sand where you cant even reach the sea, let alone swim in it, and the dubious entertainment of the Tropicana so effectively satirised by Banksy’s Dismaland.

I like to think that there is always something interesting and beautiful to see wherever you go. Sometimes it just takes a little more work to find it. We already knew of one little gem in the area, Having visited back in 2017, we were able to look forward to a walk to Brean Down nature reserve. This limestone outcrop in the Bristol Channel is an extension of the limestone of the Mendip Hills and is owned by the National Trust. It’s a welcome punctuation in the otherwise flat coast and although its doesn’t make for a particularly long walk, the steps up to the top get the lungs moving and can often be seen with queues of people waiting to catch their breath. 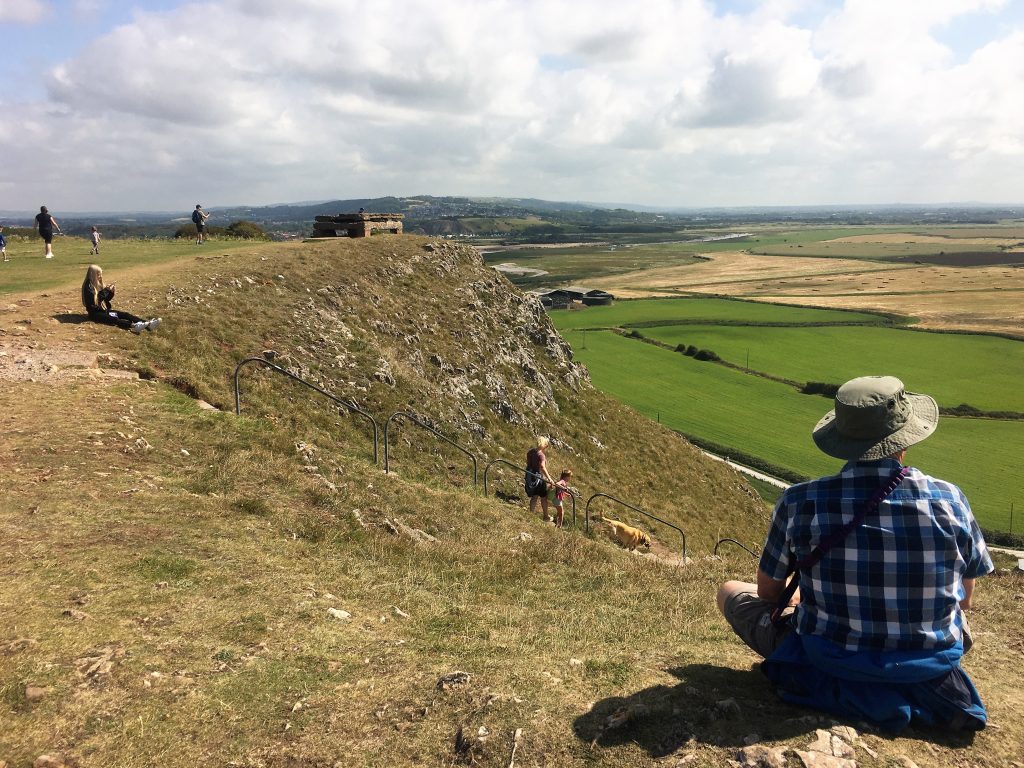 Sitting on the cliffs at Brean Down

We stayed at Diamond Farm Campsite, where we camped on their good value and scenic overflow field next to the River Axe. The field was far enough away from the regimented camping that it felt quite wild, geese flew low over the river during the day and bats swooped in the evening. The early autumn light made the dry grasses glow even when the sky was overcast. 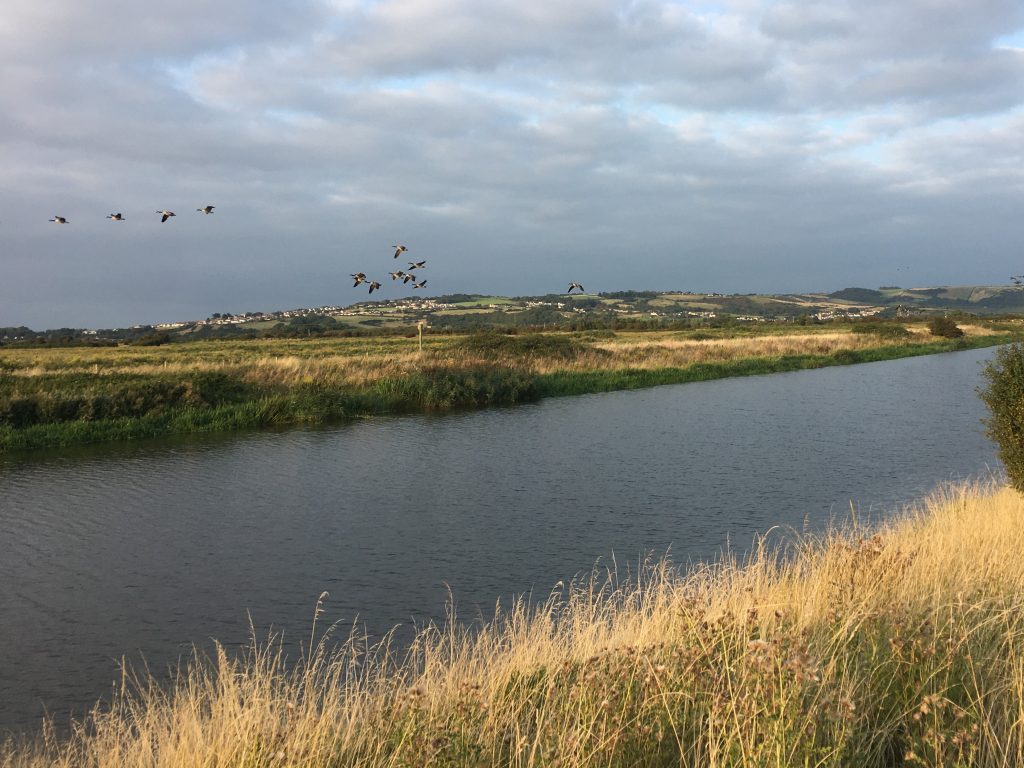 Next to the river

Our journey to the site, through the vagaries of the sat nav, led us through country roads via the pretty village of Lympsham. Maybe not the way that we should have taken but the quintessentially English village and countryside was a visual preference to the better road that takes you along the main drag of Brean where the holiday camps are hidden behind walls and fences.

The campsite is on the relatively new Brean Down Way, roughly on the half way point of the 8 miles from Brean Down to Weston-Super-Mare. We followed the route one day, crossing the river at the Barrage and following the cycle path via Uphill Wharf. 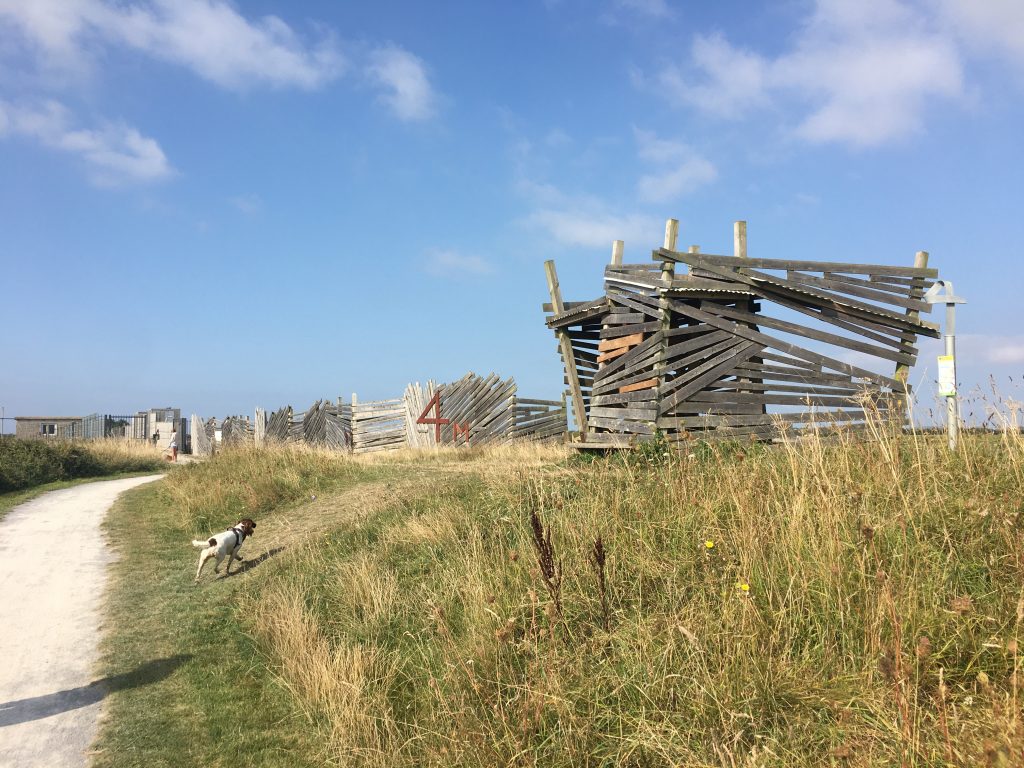 The path is nice and flat as you might expect from a cycle path. When it finally reaches Uphill it passes under an impressively craggy cliff with a church on top and the marina and campsite of Uphill Wharf beneath. 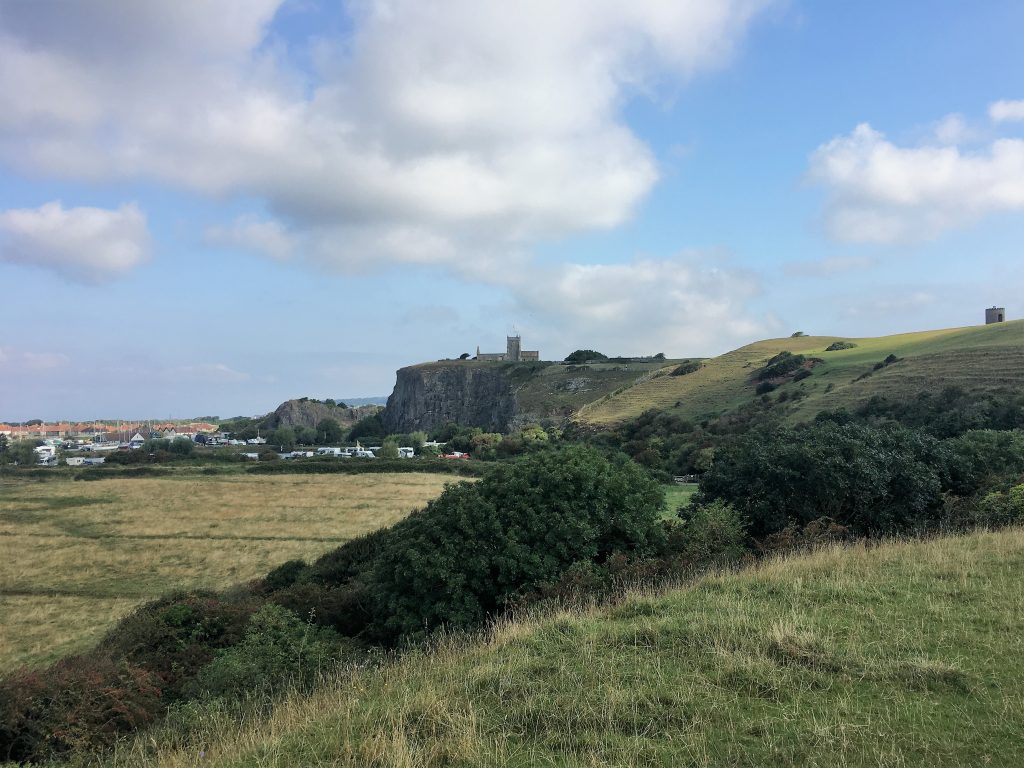 Looking towards Uphill Marina and the church of St Nicholas

Weston itself was as uninspiring as I remembered, but if we ignore that interlude the walk was really enjoyable. We wandered back by a slightly different route, going over the top of the limestone cliffs we had seen earlier. Uphill downs are crowned with the remains of a windmill – now a lookout tower – that can be climbed to allow views across the pancake flat land around. From here we were able to make out the islands of Flatholm and Steepholm (more limestone) in the Bristol Channel as well as Brean Downs. 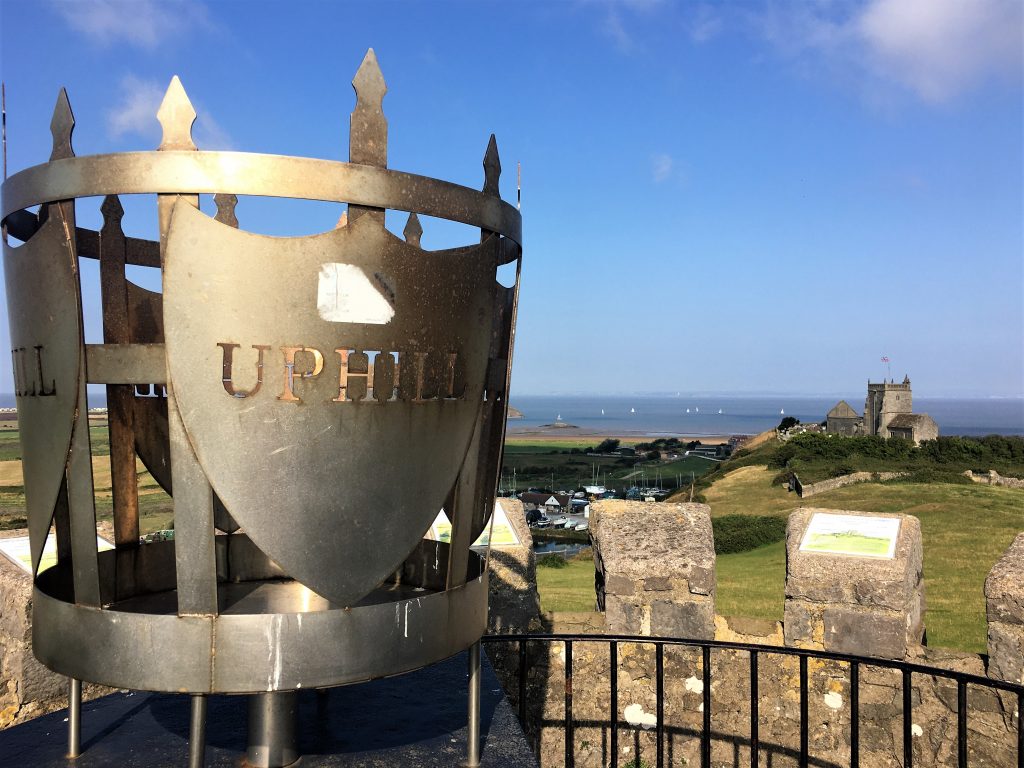 On top of Uphill Windmill 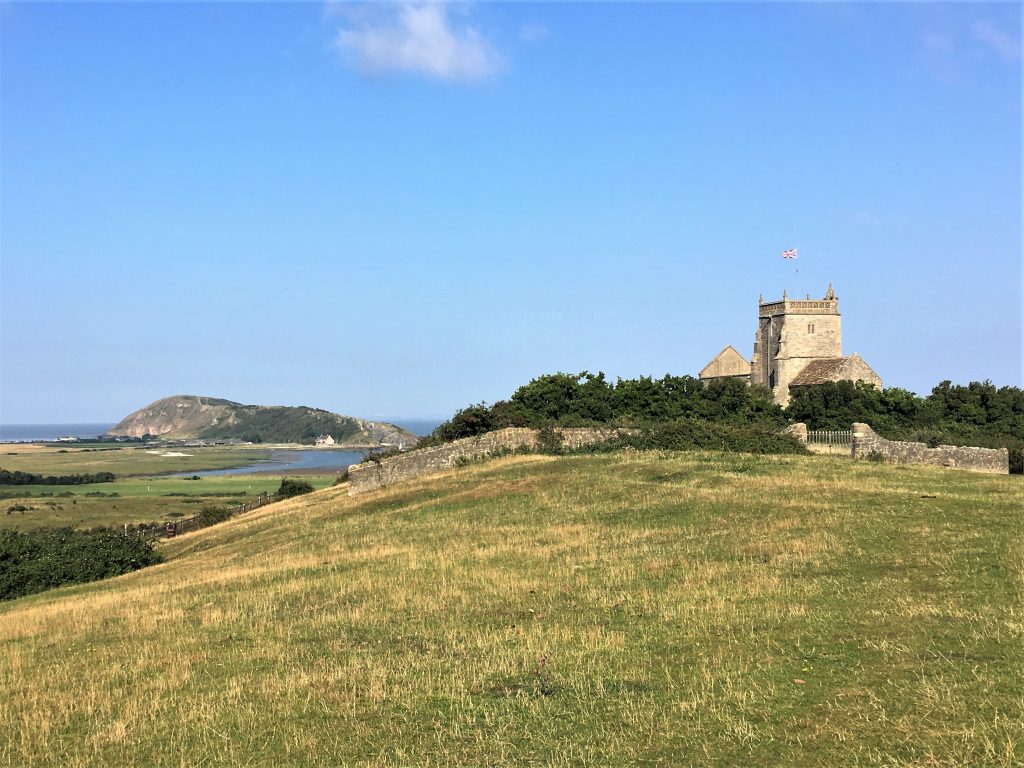 Then we followed alternative paths around the wetlands before rejoining the cycle path for the last stretch back to the campsite. 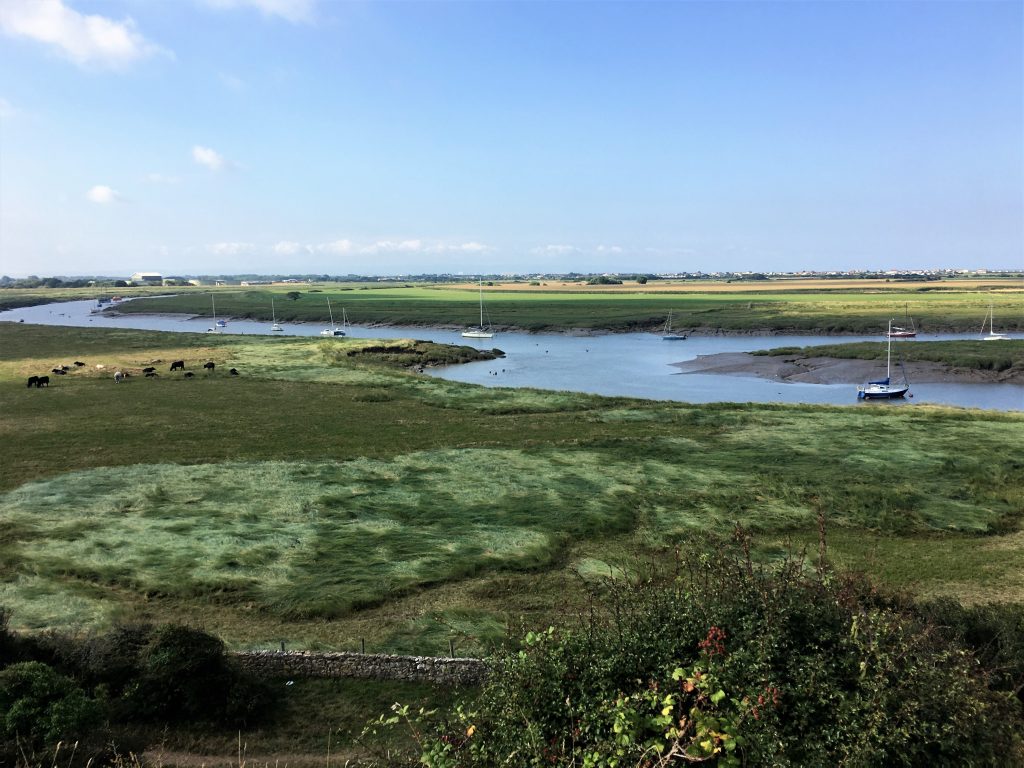 I’m not going to say that I’m in any way more enamoured of the tourist hotspots of Brean and Weston Super Mare, but I can that we easily found the reasons to visit the area,

One final reason to go – the sunsets over the Bristol Channel can be spectacular. I need to be a better photographer to capture them, but here is a taster. 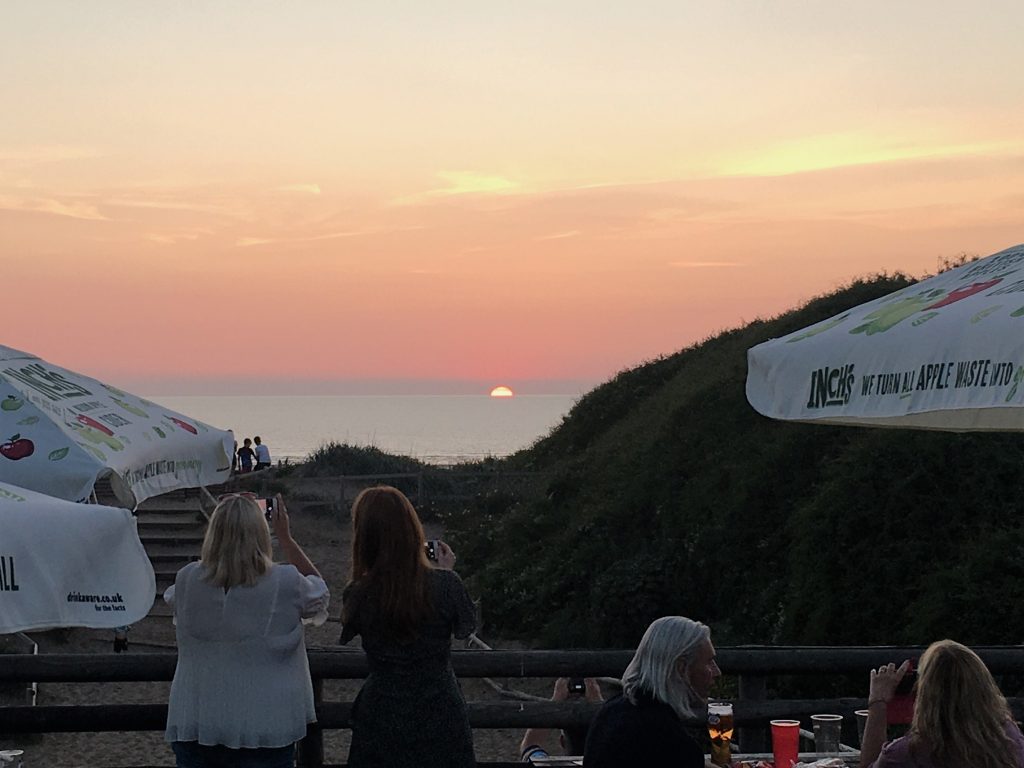 Sunset over the Bristol Channel