A few days ago we were making our way from Vaujany to Montgenevre. Our drive down from Vaujany was significantly easier than the drive up as the roads were clear of anything remotely slippery, although the sides of the roads were piled much higher with snow, pushed aside by the snowploughs (or is that snowplows? Annoyingly neither word looks right to me now but ‘plough’ must be the British spelling).

We climbed up to the Col du Lautaret and were intrigued to see people kite skiing and boarding. Sadly we overshot the only reasonable parking spot so couldn’t stop to take a better look. Down the other side of the col was Briancon – the highest city in France – where we stocked up with victuals. A very disappointing trip to the world’s worst Aldi supermarket (honestly there is no point) was made up for with a trip to the Geant Casino which had a very good selection of food for reasonable prices. Our cupboards, fridge and freezer were yet again rammed. There is LPG at Briancon too, but actually it hasn’t been that cold so we haven’t used as much as we expected. We decided not to fill up until after Montgenevre.

It was mid afternoon by the time we had finished in Briancon and we hastily crammed rustic sandwiches of bread and cheese into our hungry mouths before setting off on the final few kilometres to Montgenevre. Getting to a new location is not something to do on an empty stomach, otherwise ‘hangry’ words may follow.

The roads up to the ski resort are relatively easy with just one section of switchbacks. By-passing the town, we used the tunnel under the car parks and emerged the other side near the aire. Getting into the aire is easy enough if you read the signs and avoid driving into the first turning which is the exit. 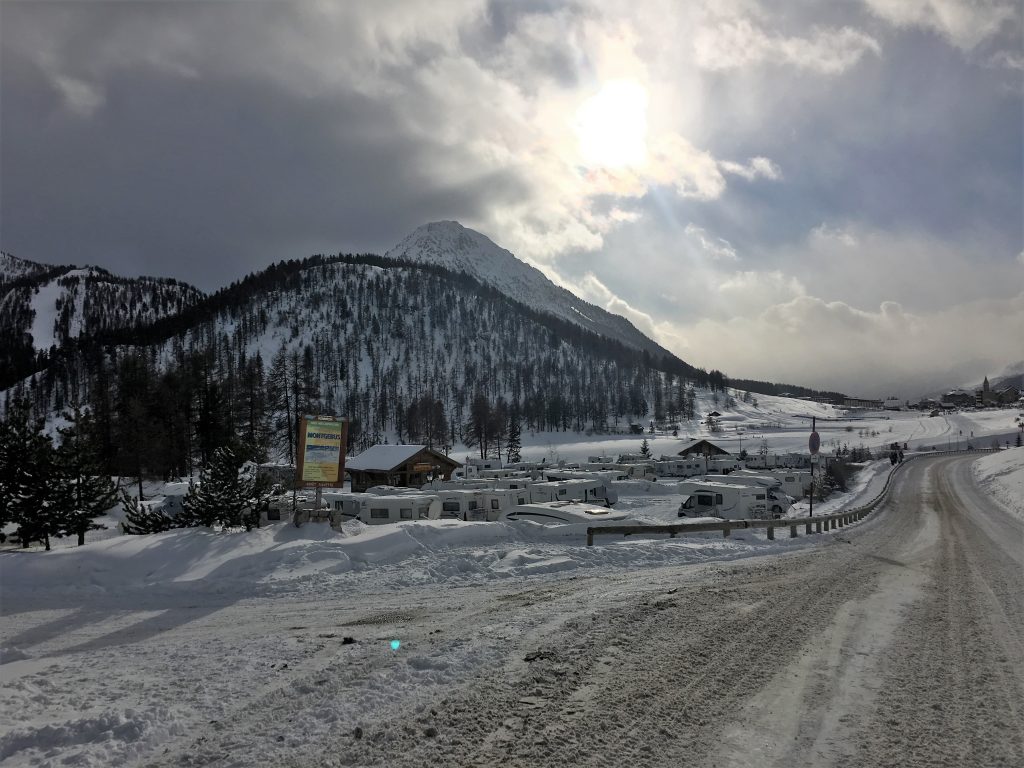 Moody view across the aire

We parked up, for practical rather than aesthetic reasons, in the middle of the three sections of parking. This meant we had no view to speak of, but we were only a short walk to the heated amenities block for water and waste. We found a working electricity point (note to self – must let the warden know that a couple have been tripped). For the first time we decided that Bertie should don the thermal screen as colder temperatures were on their way. This cut off even more of the view, which is highly frustrating. What better way to spend a ski-weary evening than to people watch? Now we’ll have to talk to each other!

The following day we decided that we would explore rather than ski. We had a good mooch around the resort, checking out the bakeries and patisseries, the various shops, the cinema and the very modern looking spa. Piste maps and ski pass prices were obtained. We washed some smelly laundry at the ‘Hola Laverie’ and generally spent a lot of time doing very little. 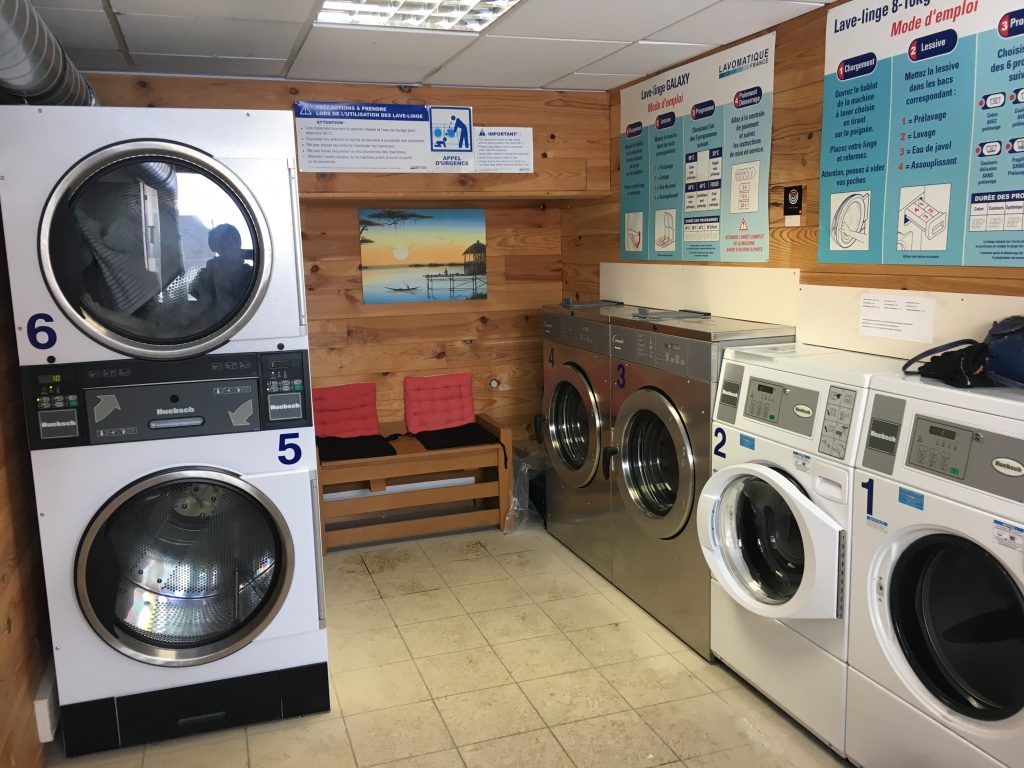 The aire slowly started to fill with weekenders, the majority of them Italians arriving from across the border but also French families on their half term breaks. This must be the largest aire we’ve ever been to (apart from Honfleur perhaps, and we didn’t end up staying there) and despite there being over a hundred vans it still didn’t feel that full.

That night we were treated to a beautiful sunset from the aire, the sky turning from burnt orange to cherry red. 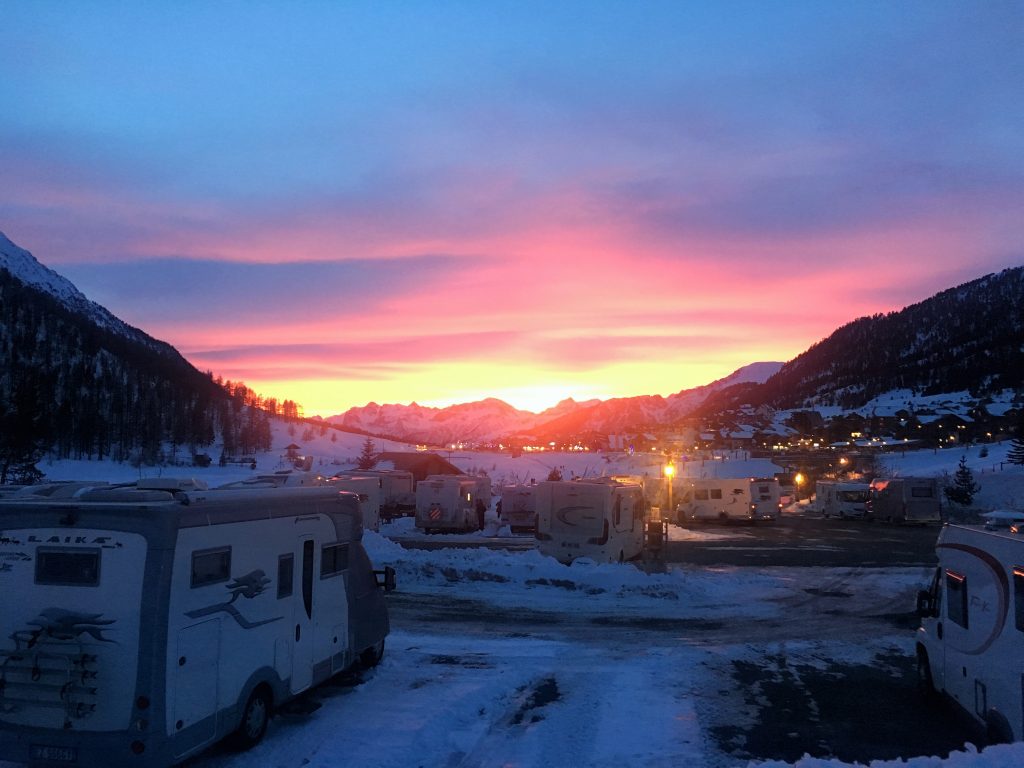 Sunset over the aire