Never let it be said that midges are a Scottish phenomenon.

Our next stopping point was the reservoir of Nant-y-Moch, by the head of the dam was a wide parking spot with a view down the valley where we chose to stay for a couple of nights. It was strangely busy during the day with passing vehicles using the small road between the A44 and A487 and double articulated logging lorries managing the single track lanes with far more confidence than we managed.

Maybe we should have expected the midges, as we headed up the road to the reservoir we commented on the way it felt like the nighlands – long stretches of single track road, but with long views as well, so you could usually see what was coming. On the final approach to the parking spot there were highland cattle grazing by the road. The weather was mild and damp. Of course there were midges. Thousands of the blighters. 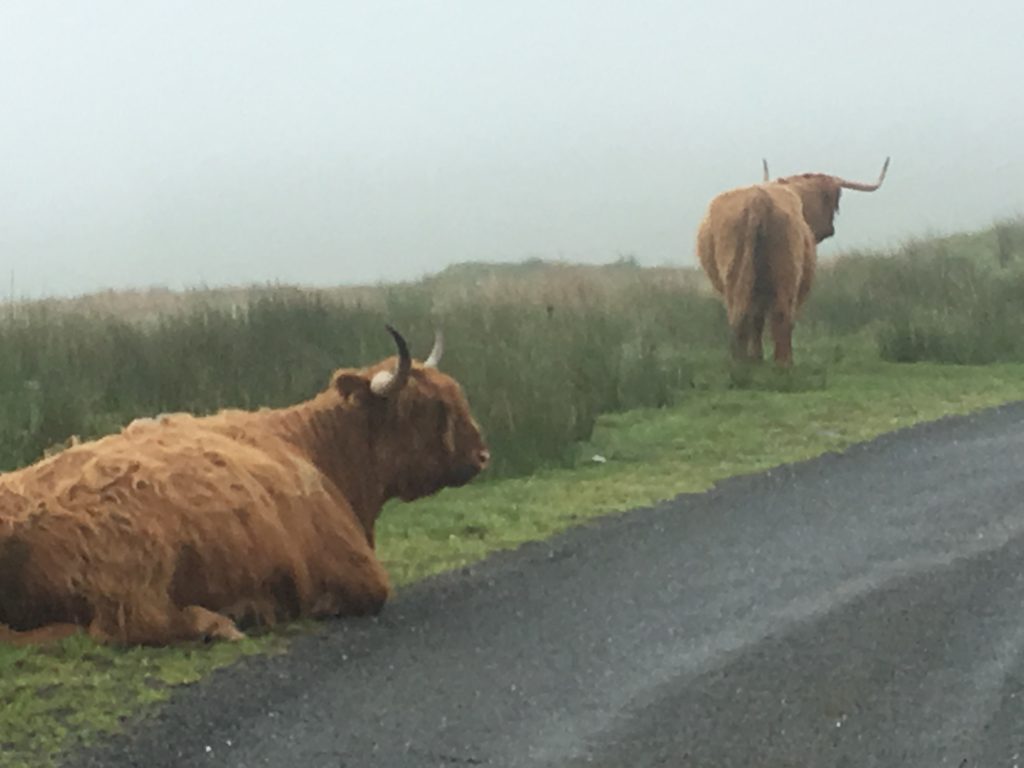 After a quick walk we decided to hole up for the rest of the afternoon and evening and shut down the van – even so a few managed to find a way in, every vent was fair game, and it was pointless using the flyscreens as they could get through the mesh. 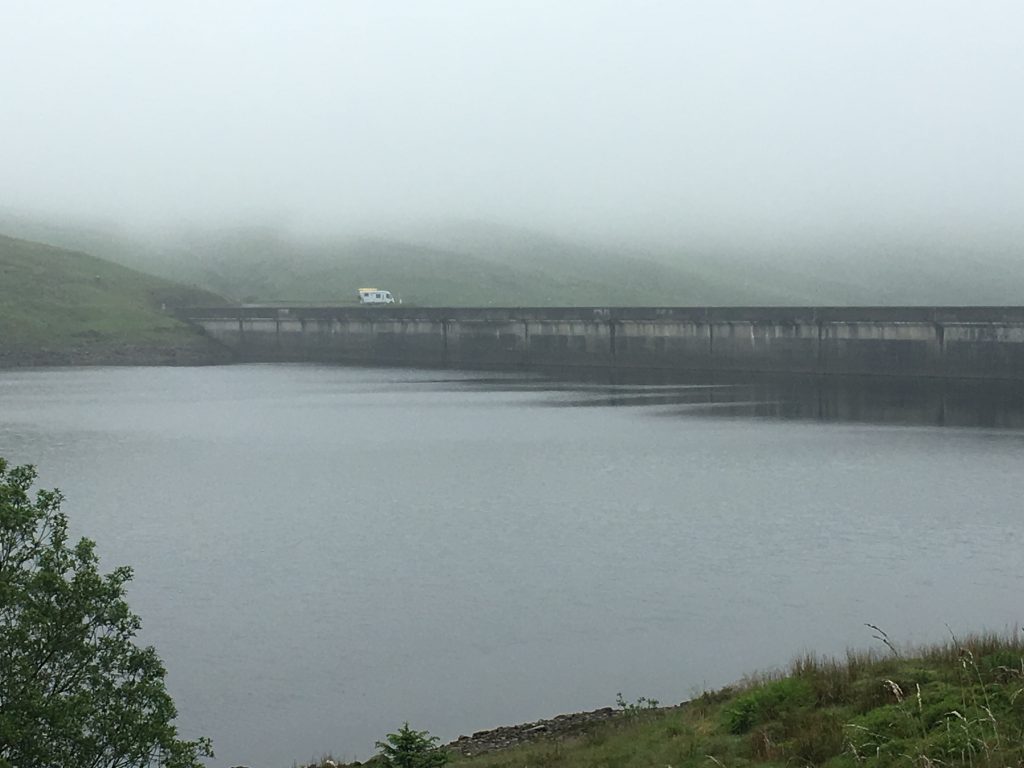 At one point we thought we were going to have company as a VW van pulled up across the parking space, opened his doors and put out cycling gear to dry. Less than half an hour later he was off, doors slammed in disgust and top still popped up as he raced away to escape the midges. When we saw him round the next bend he had thankfully stopped to put his roof down.

The next day dawned brighter and midge free, Bertie was covered in rivulets of dead midges who must have all decided that Bertie made the ideal final resting place.

We thought we would go for a bike ride round the reservoir, the OS map showed roads, tracks and bridleways that went all of the way around so off we trundled.

We fell at the first hurdle, where the landowner obviously didn’t care that the track was marked as a public right of way and had padlocked his gates. After looking at the map we realised we’d be spending a lot of time lifting our bikes over gates if we continued down this route – so we retraced our steps and took a slightly longer route. There were a few exciting sections with a number of rivers to ford (the trick is just to go for it and keep peddling – we got wet but it was a nice day so no harm done) and some very rocky sections of track that had to be walked. We saw lots of kites and buzzards and fighter jets passing overhead. All in all it was going well until we hit a point where the track ended and the bridleway ahead passed over some boggy ground.

It’s always a bit of a gamble when planning a bike ride using bridleways. Horses can manage far more varied terrain than a bike (especially a bike powered by me) so generally we avoid anything that looks too steep, I now know to avoid bogs and marshes too. We tried to keep to the line of the path – but there was no path and we ended up having to push and carry our bikes through about a mile of grassy tussocks and boggy ditches, by the end we walked down the river as it was the path of least resistance. To top it off a herd of cows decided to make a combined run towards us which scared the living daylights out of me. Paul made some farmerish noises at them though and they begrudgingly stopped and watched us like a bunch of surly teenagers as we struggled past. It wasn’t fun, the only upside was that we could see where the track started again and after that it was a short two and half miles back to the van. In hindsight though I’d rather have turned around and retraced my steps! 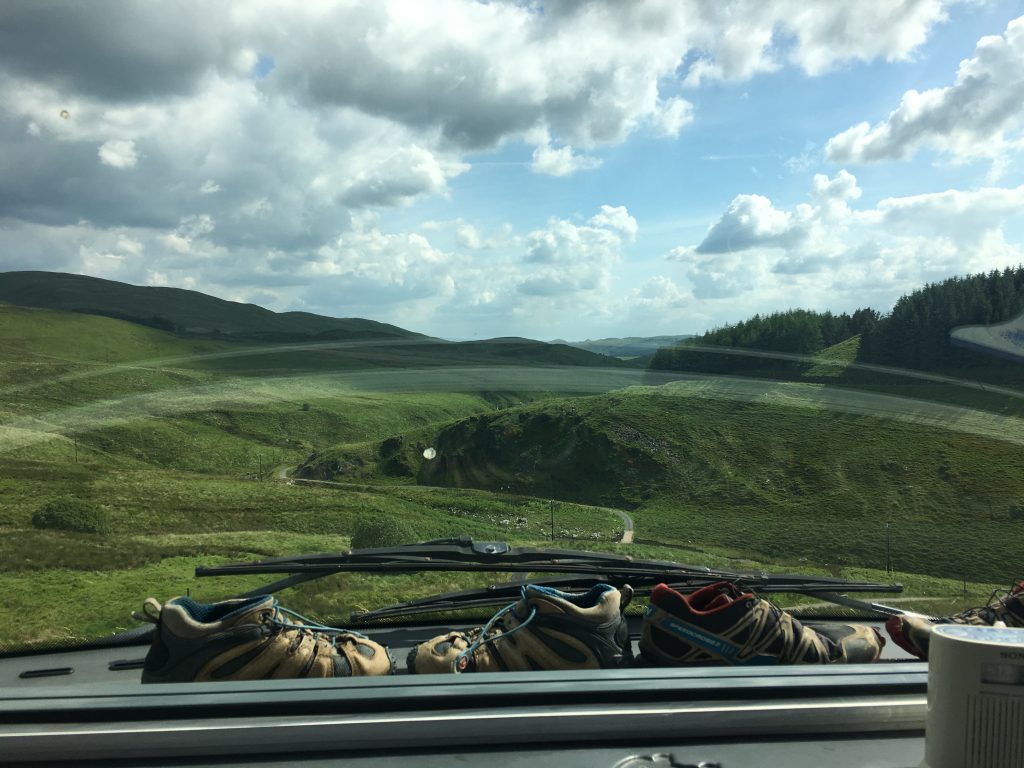 Trainers drying on Bertie’s dash after a soggy bike ride