It was still raining when we left Machrihanish Campsite, but we knew that the following day would be good so we made our way up the west coast of the Kintyre peninsular stopping a few times to take in what view there was and finally coming to rest for the evening at the ferry terminal for Gigha island. Ferry terminals are good for motorhomers, they often have toilets, water and free CalMac wifi as well as other services.

Gigha is a small island on the west coast of the Kintyre peninsular, there is not much on the island but it was meant to be pretty and sounded like a good place to while away a few hours in good weather.

The following morning dawned as sunny as promised and we left Bertie in the car park happily charging his batteries while we took our bikes across as foot passengers on the small CalMac ferry.

We cycled up to the North end of the island where we scouted out the possible motorhome parking spots (you never know – we may be back) and sat and watched the sea for a while until a fishing boat disturbed the peace with some very loud rock music; you know, the type that they heavily advertise around Father’s day. Fair play, it’s probably quite difficult to listen to music over the sound of the sea and the noisy diesel engine of a fishing boat. 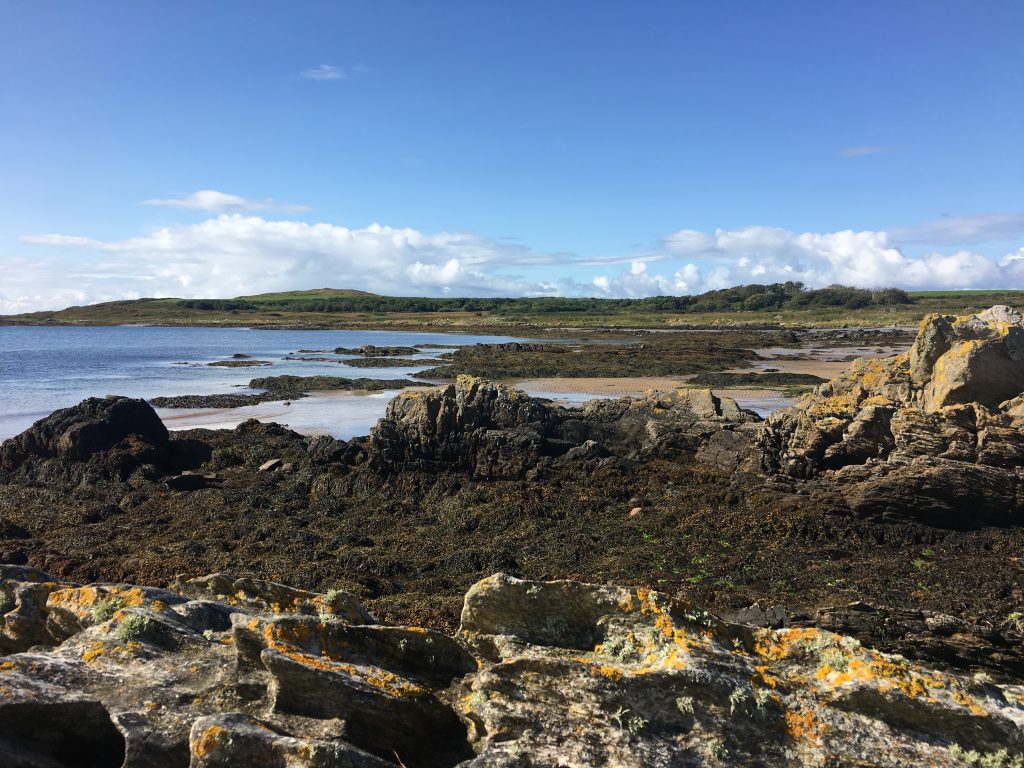 View across the bay from the North End of Gigha island

Next we tried to reach the twin beaches which link Gigha to a small tidal islet. We could see them from a distance, the shining white sand looking inviting, but as we set off down the track it got muddier and muddier until we could cycle no more. Undeterred at that point we continued on foot, but eventually we had to give up as the track became a muddy lake and our attempts to force a new path through brambles and bracken came to nothing.
Finally, after cycling the full length of Gigha we took a track down to a beach signposted for the beach at Port a’ Chinn Mhoir only to find a sturdy cream bull walking down the path ahead of us, swinging his testicles in a way that said ‘I own this path’. As the path was narrow there was no going past the bull, but we slowly urged it forwards until the path became wider and it headed off in a different direction to us.
We finally had a beach we could relax on, the weather was nice enough for me to go for a paddle in the shallow sands of the bay, which was also what the Bull was doing – heading for a group of cows that I’m sure had been on his mind all along. 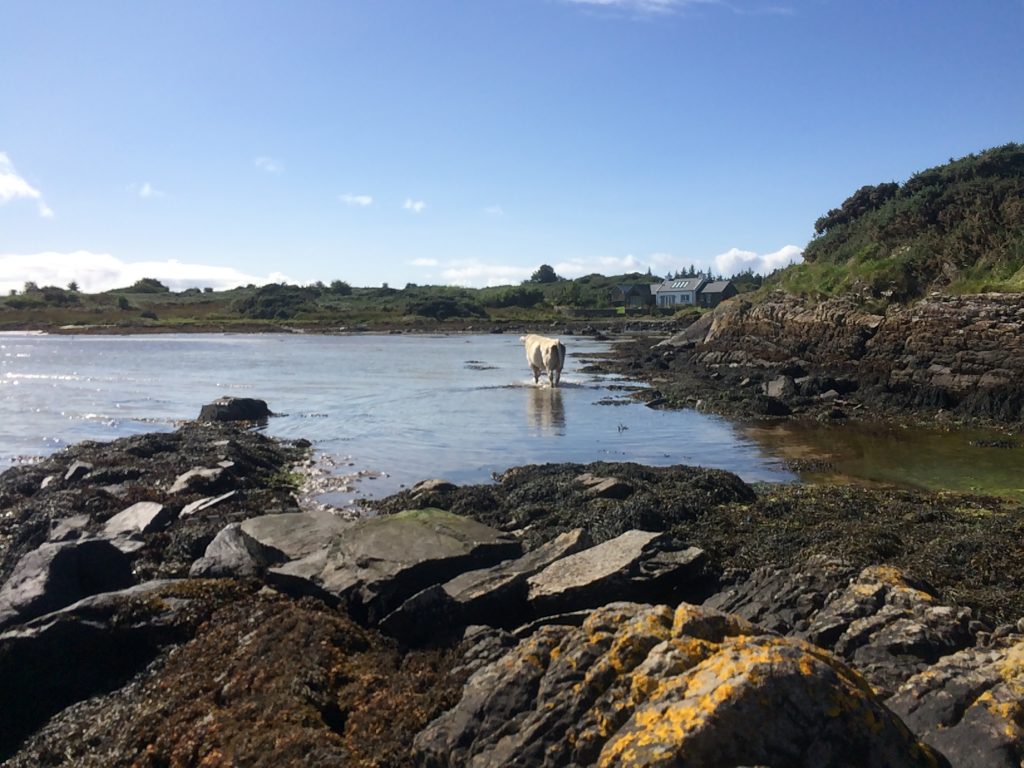 Bull wading across the bay 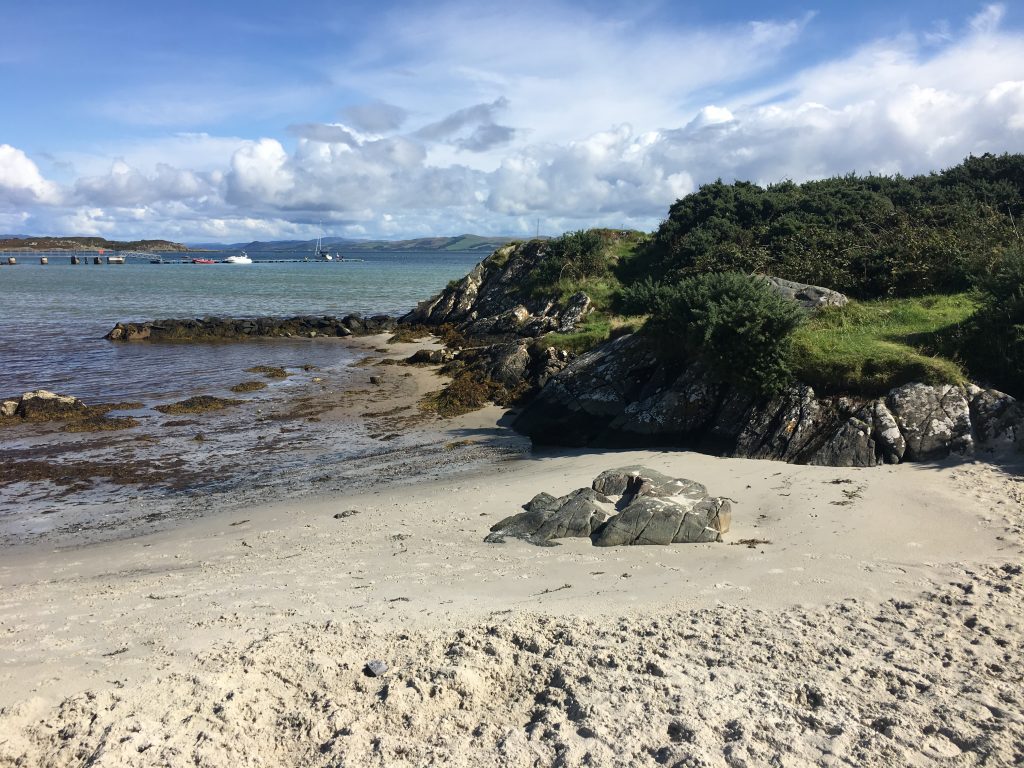 White sand beach on Gigha – just right for a paddle

That evening we felt sun tired and couldn’t be bothered to cook, so we went to Big Jessie’s café for a fish and chip supper.
To help the (perfectly cooked) greasy stodge down we walked along the beach north of Tayinloan bay before spending a second night at the ferry terminal. 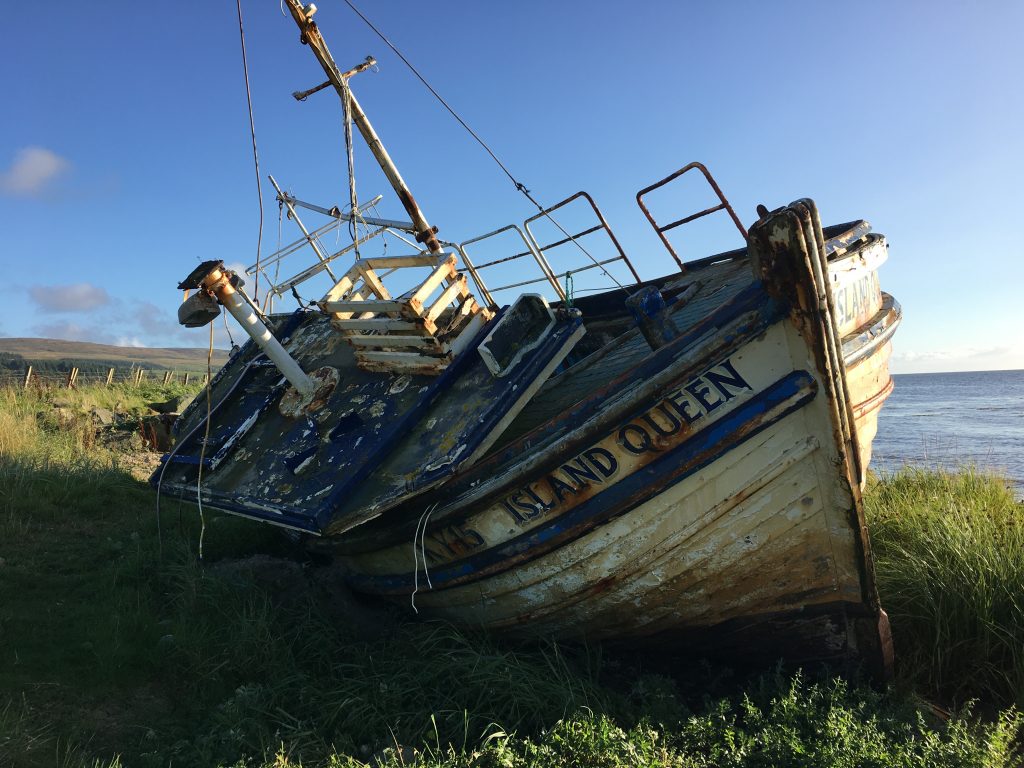 Shipwreck on the beach north of Tayinloan 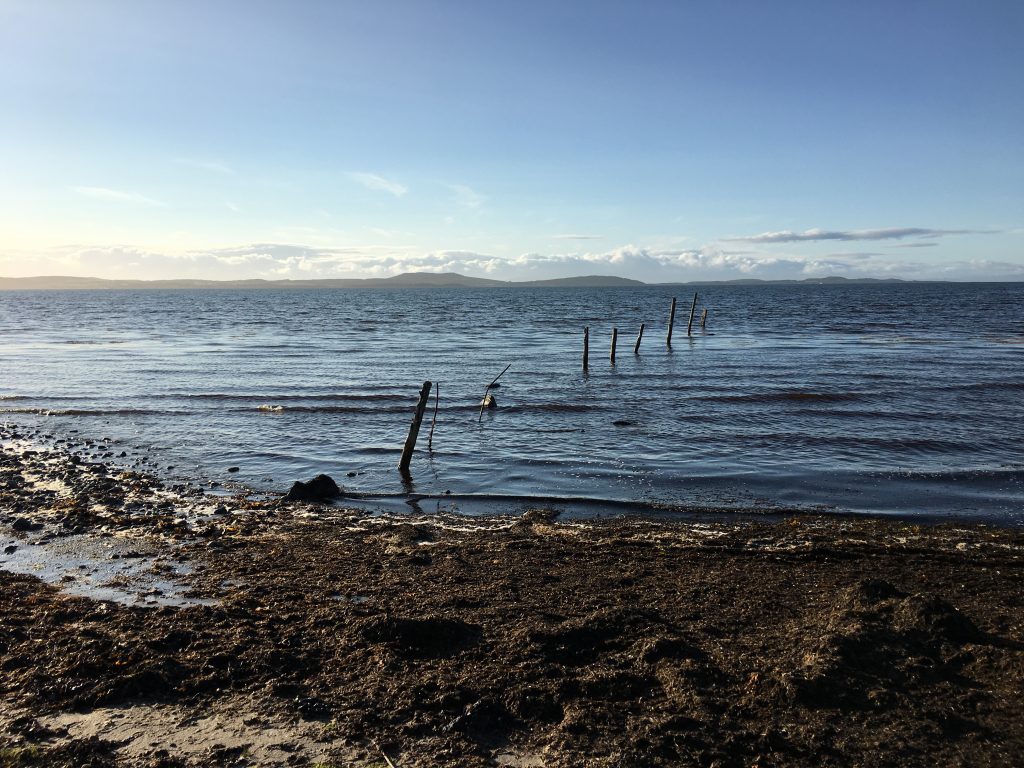 Mysterious posts heading out to sea