I’ve mentioned before that my French geography is not great, so it came as a bit of a surprise to me when I realised that we were on the edge of the Champagne area. After the initial surprise was a short flurry of excitement. I do like a bit of bubbly, it doesn’t have to be Champagne, but I would feel guilty drinking anything else while here.

We did still have to move on though, and although Troyes was a tempting destination it didn’t move us far enough. Instead we targeted Reims, a town that has a famous cathedral as well as being one of the main towns of the Champagne district.

We arrived at the municipal campsite of Val-de-Vesle on the Saturday evening. It is about 20km from Reims along a canal with a well defined cycle path. The campsite was pleasant and was good value at just over €16 although it did have one of those complex pricing structures where you pay a small amount for each component of the stay. The toilet block was spotless, even after I had dyed my hair, and trees provided dappled shade. For the first time in ages we bumped into another English couple, exchanging stories of narrow escapes from even narrower roads (most in the UK). With the campsite came an opportunity to barbeque and sit in our chairs in the sunshine, we decided to stay two nights instead of one to enjoy the opportunity.

I had a quick peek on the internet to find out what was possible on Sunday and we decided to cycle into Reims, do a champagne house tour, see the sights and have some lunch. Possibly not in that order.

Reims on a Sunday was a hushed and peaceful town, families were walking or cycling along the canal, but the town itself seemed solely the preserve of tourists. All shops were shut, so only the tourist attractions and the supporting infrastructure were open. We could easily have driven Bertie in and parked up, but it was good to get some exercise. The route went past the town of Sillery where we paused to gaze at the French cemetery and remind ourselves of the depredations of the First World War. 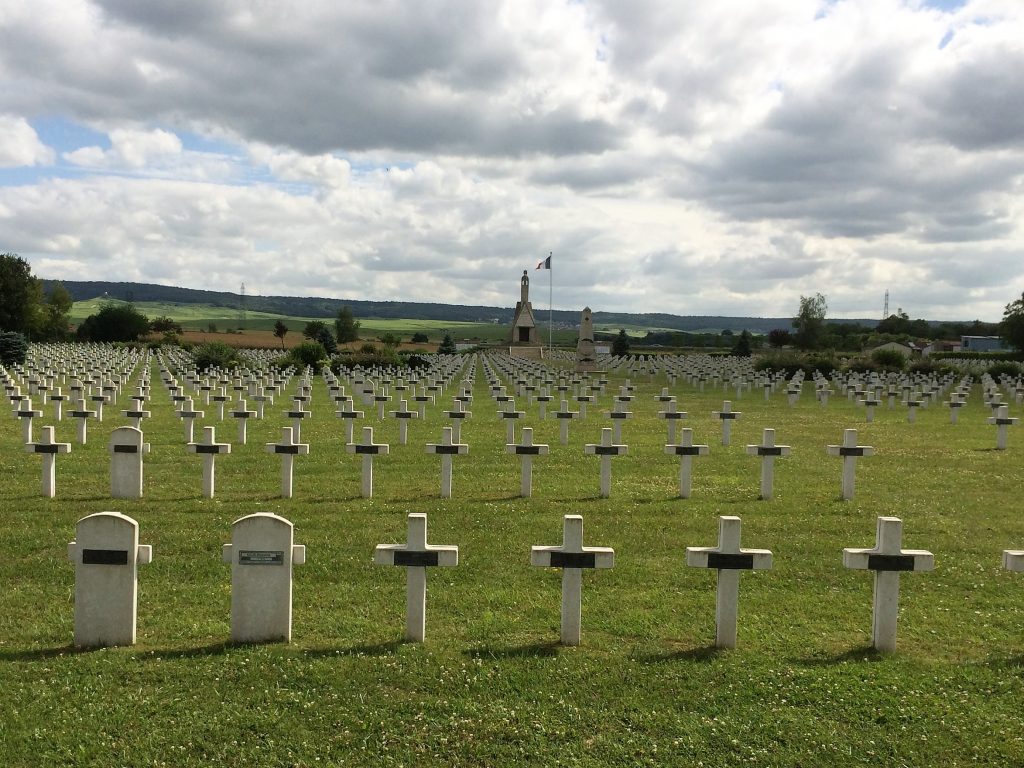 Reims cathedral was our first port of call; the ‘royal cathedral’ has been the place of coronation for all but seven of France’s monarchs. Ok, the first few monarchs, starting with Henry I in 1027, were crowned in an earlier cathedral which was destroyed by fire. But work soon started on the current gothic cathedral and since then it has remained standing, despite the Hundred Years War, the French Revolution and the First World War. Of course it has been updated over time; the First World War significantly damaged the building and there are beautiful modern stained glass windows which were installed in the 20th century to replace the windows blown out by German bombardment. Apart from the stained glass the cathedral has many statues and carvings on the tall, narrow facades and arguably the outside is more attractive than the fairly stark interior. Look out for the statues of Joan of Arc, one inside and one outside, who liberated the city and cathedral from the English. 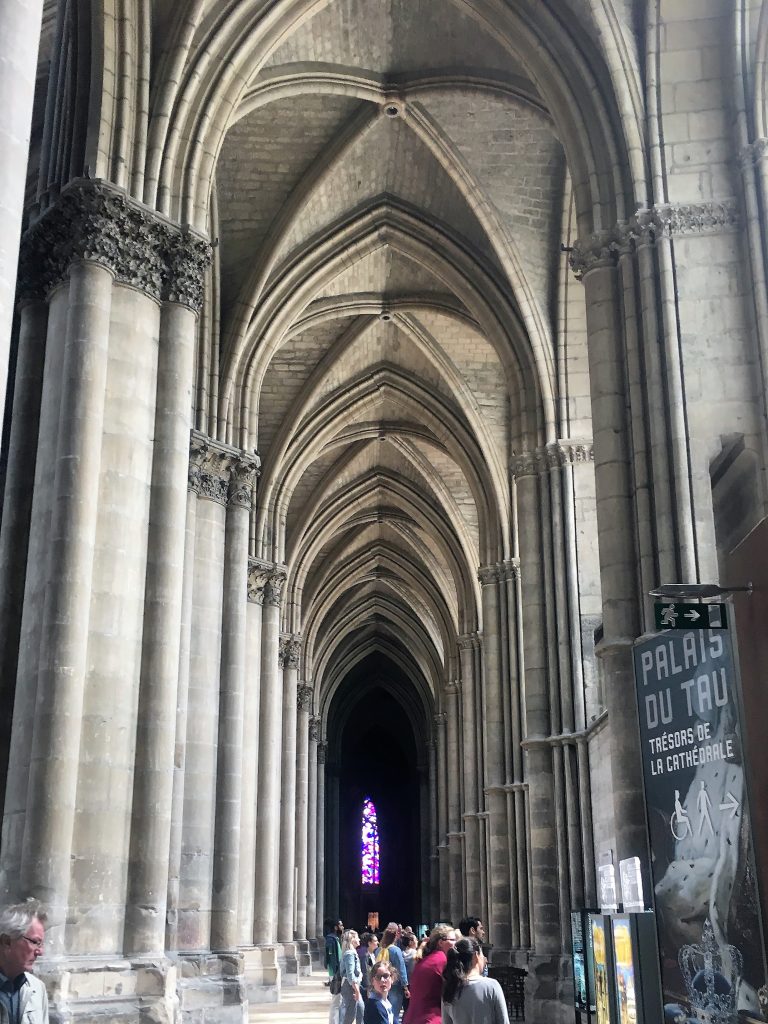 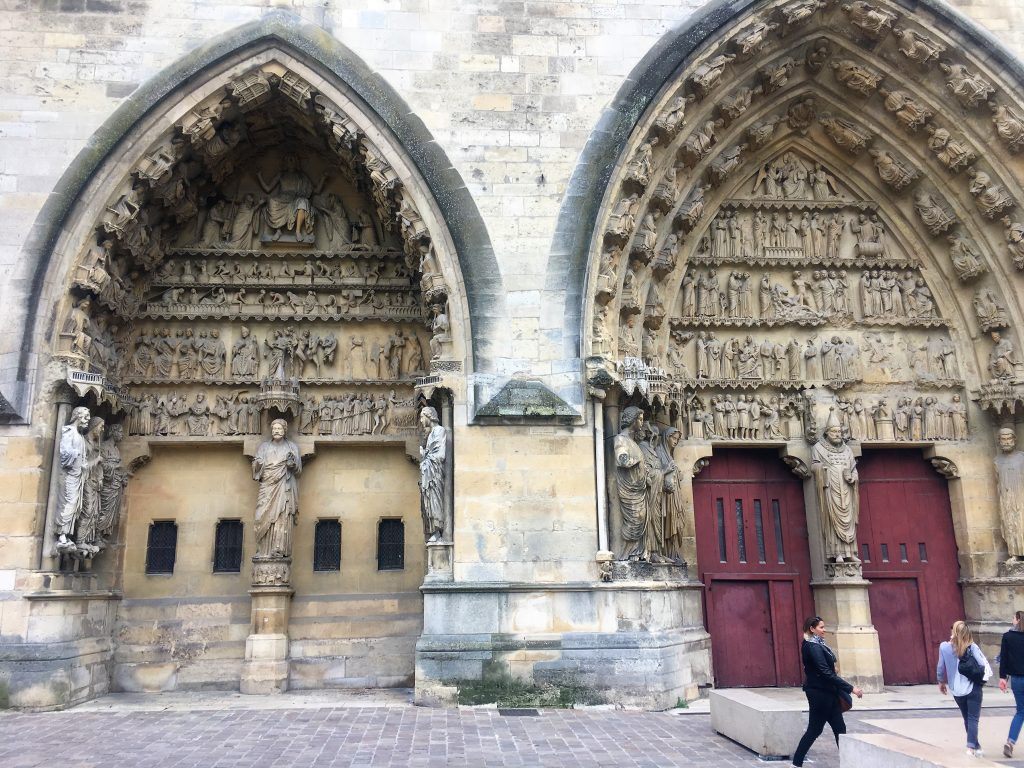 Side portals with many carvings

After the cathedral we took a wander round the city centre, following a walking map provided by the tourist information centre. We visited the Saint Remi Basilica, a Gothic style building of more pleasing dimensions than the cathedral which we found exaggeratedly tall and narrow. In the city the first world war devastation provided opportunity for redevelopment and the city has quite a number of art deco buildings, including the market and the Carnegie Library. We found our attention was not captured for long though because most places were shut and the atmosphere was almost too quiet. This was a bit of a shock for two people who don’t really like busy cities, we now know that we don’t like empty cities either! 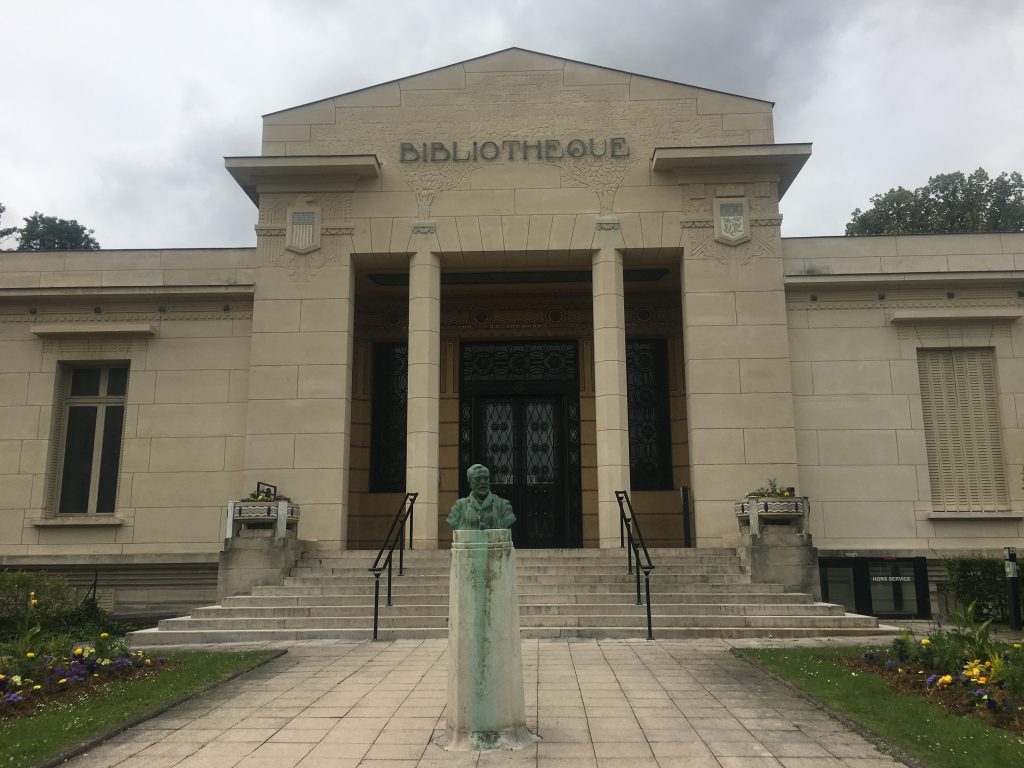 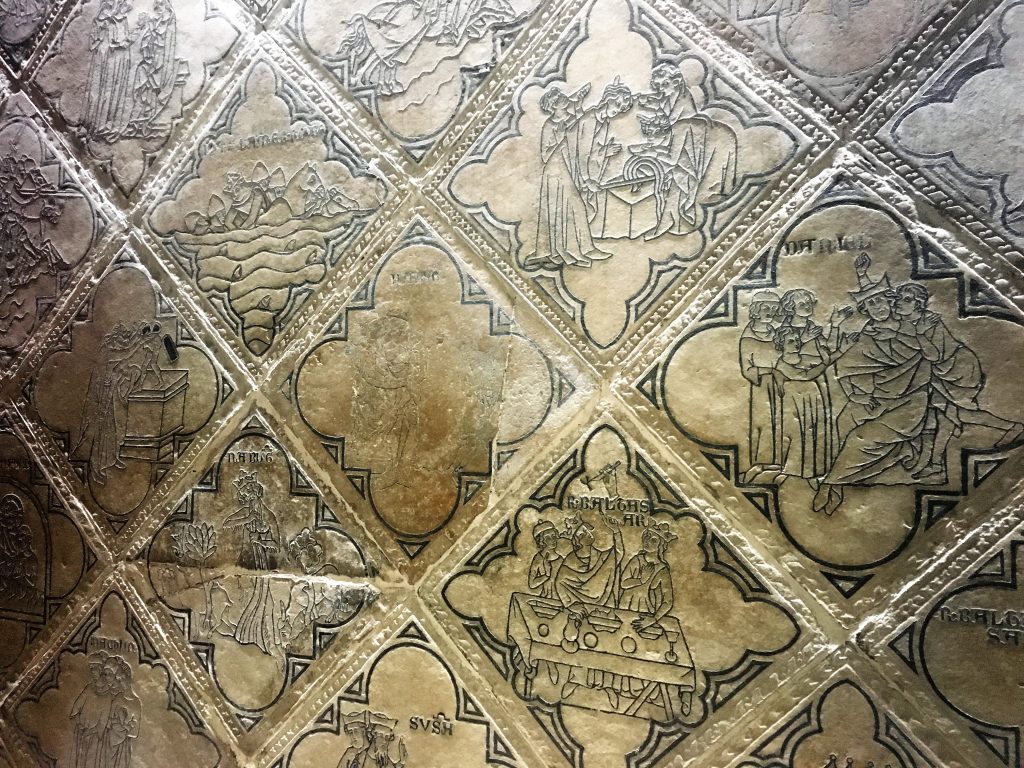 Tiles in the San Remi Basilica

We stopped for lunch before moving onto the Taittinger champagne house for a tour. There doesn’t seem to be much difference between the champagne house tours, so we picked Taittinger because it was open on a Sunday and had a very clear online booking system. The tour was quite interesting, a short film about the history of Taittinger, followed by a tour of the cellars. The building you can see above ground is quite modern and uninspiring, but underground in the cellars you are in a network that was started in Roman times as chalk quarries. The upside down funnels of the chalk excavations were then extended by Benedictine monks who were digging the crypts and cellars for their abbey. The wine and champagne houses appropriated the caves and extended them to house thousands upon thousands of bottles of champagne, all stacked neatly and nursed to maturity by patient and knowledgeable staff. The soft chalk provided many opportunities for people to leave their mark through the years and faces and names have been etched into the rock, including marks left by locals who sheltered down here in the Second World War. 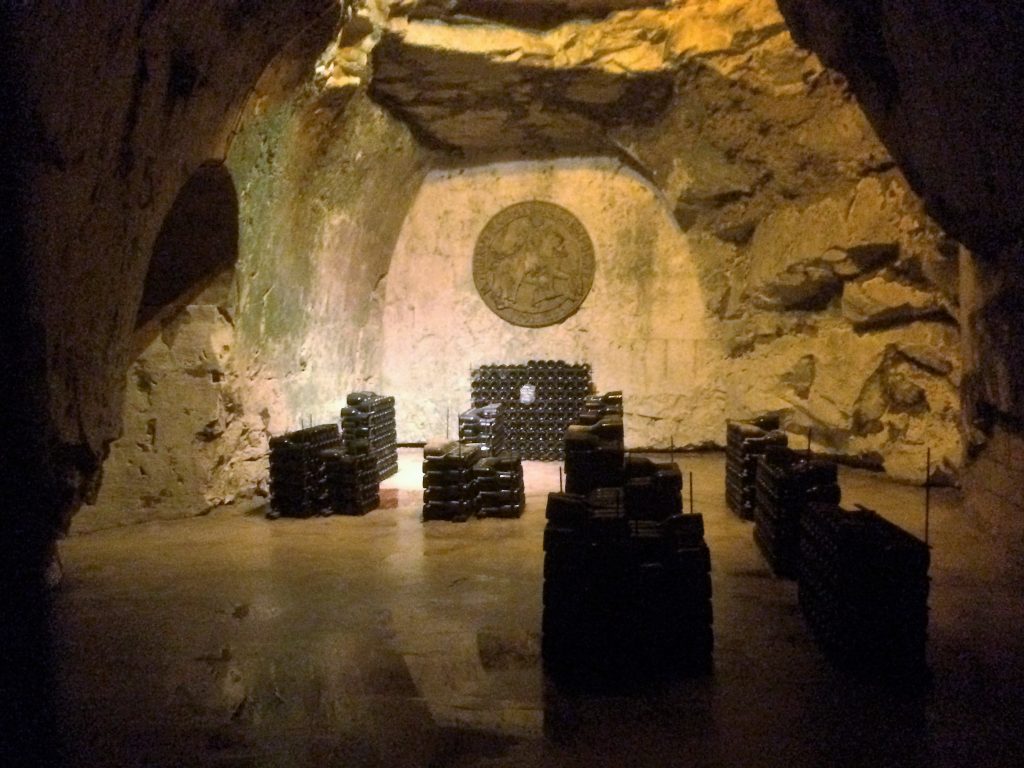 A few of the champagne bottles in the caverns 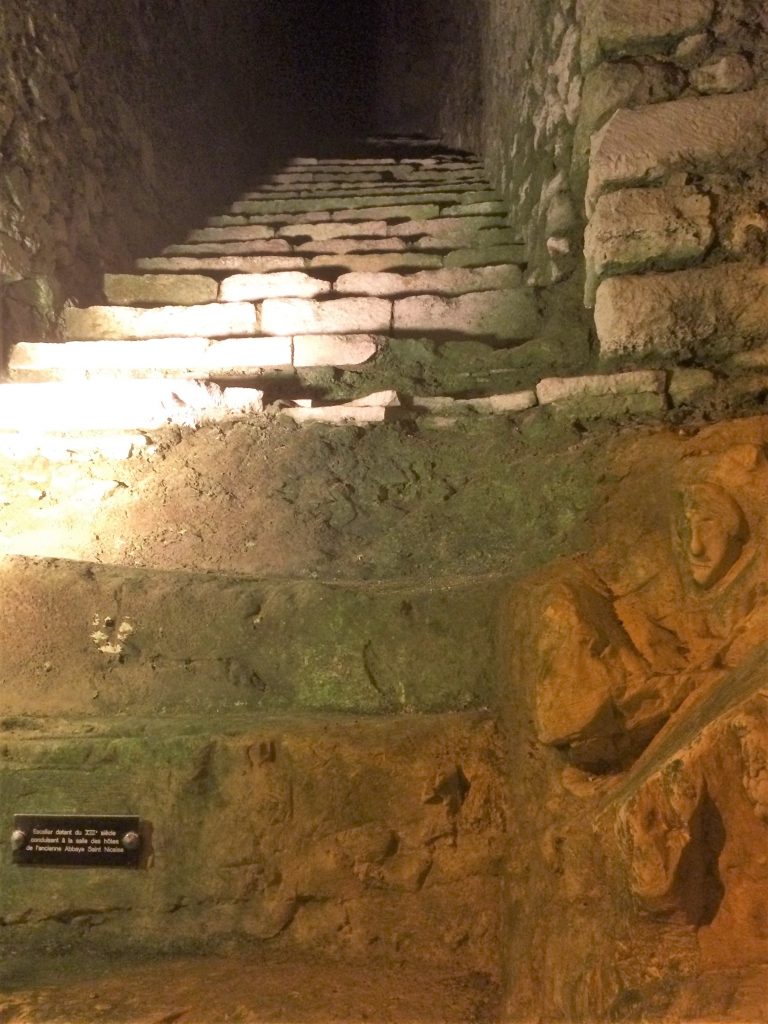 Stairs to the now non-existent abbey 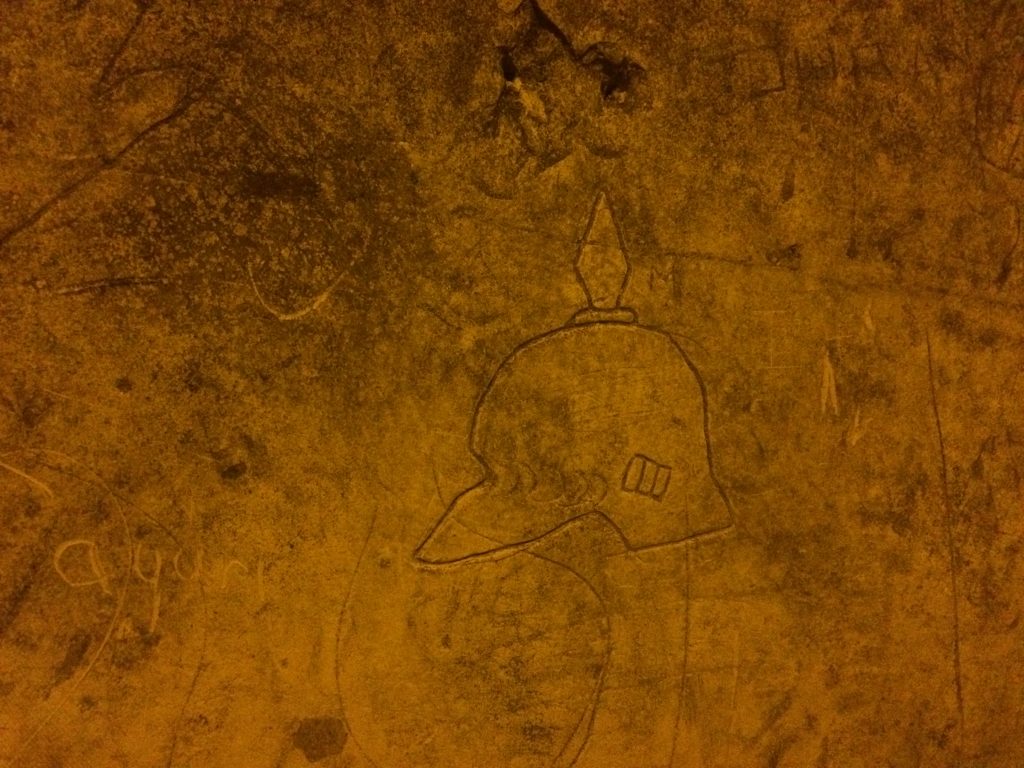 Graffiti on the walls

After the tour of the cellars it was back up to the bar to sample some champagne, being a cheapskate I had booked the lowest cost tour with one glass of champagne each. As Paul doesn’t like champagne I was looking forward to drinking two glasses, but in no time Paul had finished his glass, only to tell me that he still didn’t like it. What a waste!