In search of a sosta we left the beautiful Piano Grande (I keep wanting to call it the Grand Piano, but that’s something else entirely), driving the mountain road to Norcia. It was Saturday so there were no workers rebuilding the roads, their heavy duty vehicles were ready and waiting for Monday, sitting on the sides of the road  accompanied by materials for repairing the earthquake damage.

We followed behind a large truck who was taking things slowly down the hills; a lot of this road is single carriageway while it is being repaired, some sections are controlled by traffic lights and others where the traffic is left to it’s own devices. It’s reasonably wiggly, but in normal circumstances would be a run-of-the-mill road, in these circumstances we were happy to be behind a big vehicle.  As we approached Norcia and the roads flattened out the driving got easier. There is a sosta here but we weren’t sure where it was or whether it was still in operation. We followed the roads through Norcia, past the zona rosso and the pre-fab buildings now housing the local shops and businesses. We didn’t spot any signs for the sosta, so rather than get caught in any odd traffic systems we moved onto the next place we knew there was a sosta – Preci.

The drive through the valley to Preci is attractive, along a river valley and past many trout farms teeming with fish. Preci has an old borgo sitting on the hill, and a newer settlement in the valley, including the obligatory prefab buildings for anyone made homeless by the earthquake. The sosta is in the valley and it’s crazy paving surface has a few loose stones that made us cautious as we drove in. A few campers and caravans look like they are being stored here permanently, but only one is being lived in; a lady with a caravan and large awning. There was an Austrian van but we never seemed to catch the owner who was out and about on his moped. It may not sound that great but actually the sosta was free, with electricity and a building with a wet room. We made use of the wet room while we were here, using the shower and also using the large sink to hand wash some of our smelly walking/cycling gear. Before we left I gave the room a good clean (ok, maybe just a clean, it’s not one of my key skills), it felt like the least we could do for making use of the facilities. 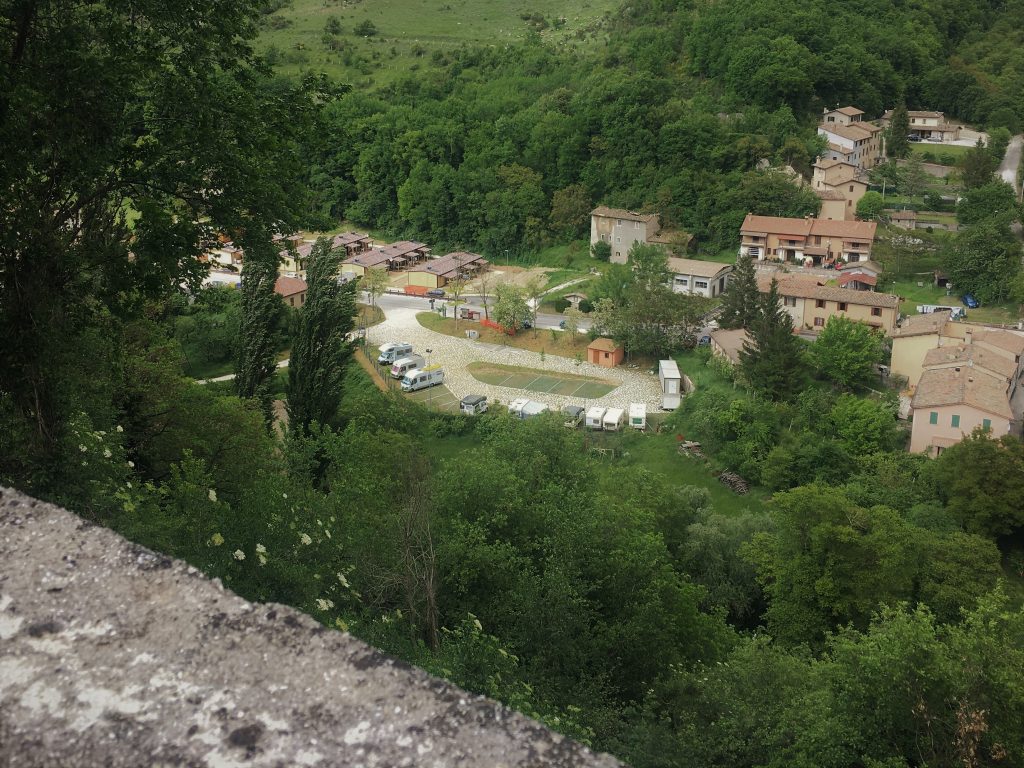 Looking down on the sosta at Preci 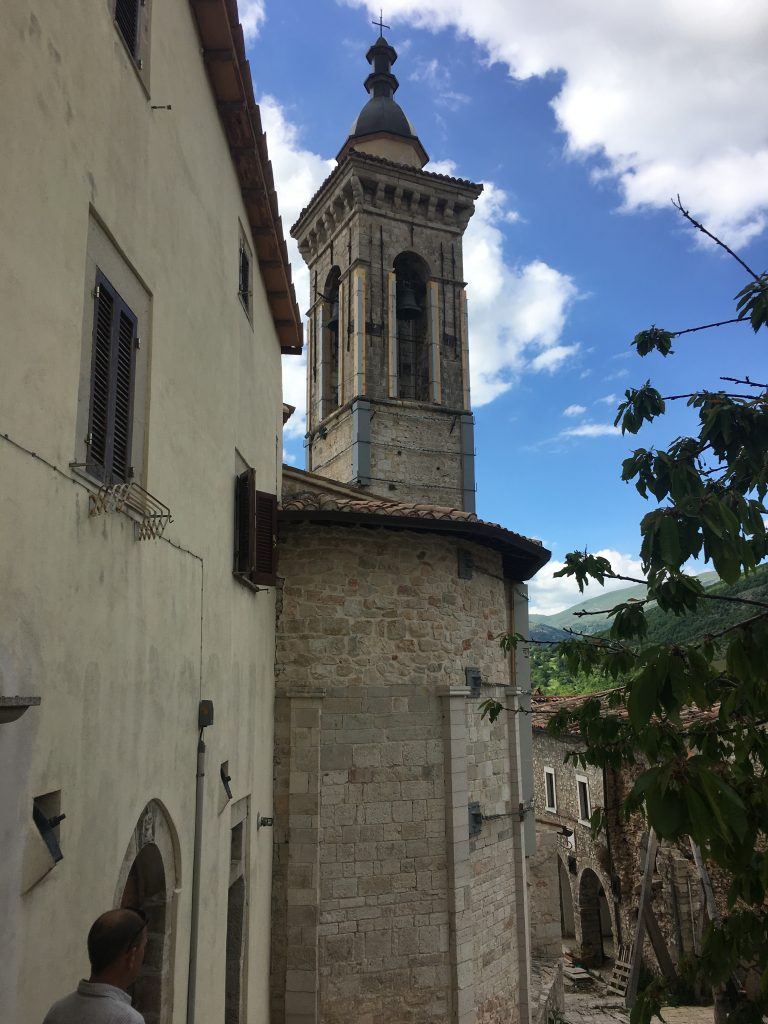 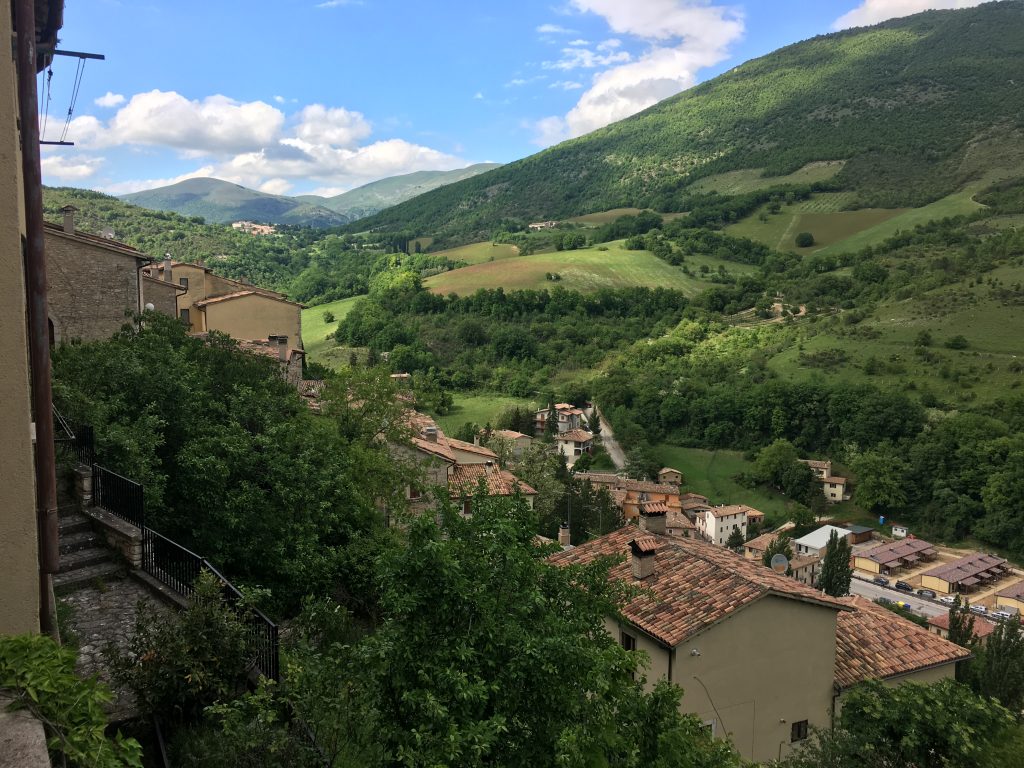 While we were here we went for a bike ride and a walk as well as exploring the old town, which was largely off limits due to the zona rosso. The bike ride was flagged as Easy on wikiloc, but for us it ended up being pretty strenuous. It was a well marked route (B12) along the road towards Campi, leaving the road to follow a mule track. We passed a couple who were on a donkey trek, leading their animals from B&B to B&B. Although it seems quite romantic I wonder what it’s really like to try to get them moving on a hot and stuffy day.

The track was stony and steep enough in places that we had to get off and push uphill. We sweated and strained as we fought against the soft surface of the track under the hot sun.  Eventually we crossed the main road to take the path back along the other side. Here the path became fun single track with some interesting drop offs on one side. Eventually the path became downhill, still single track it was more and more overgrown with the undergrowth hiding steep steps and large chunks of rock. Paul persevered for a while but in the end we were both pushing our bikes downhill. Our final obstacle was when we reached a village. The map hadn’t marked this path as closed but our first sight of the village is a collapsed building with a zona rosso barrier. The rubble from the building had collapsed across the path. Maybe we should have turned around at this point but we had no desire to retrace our steps to the halfway point. We carried our bikes over the rubble and down through the village red zone with some trepidation. When we got out onto the road we breathed a sigh of relief, all obstacles had been overcome and all we had to do was follow the road back to Bertie. Phew. 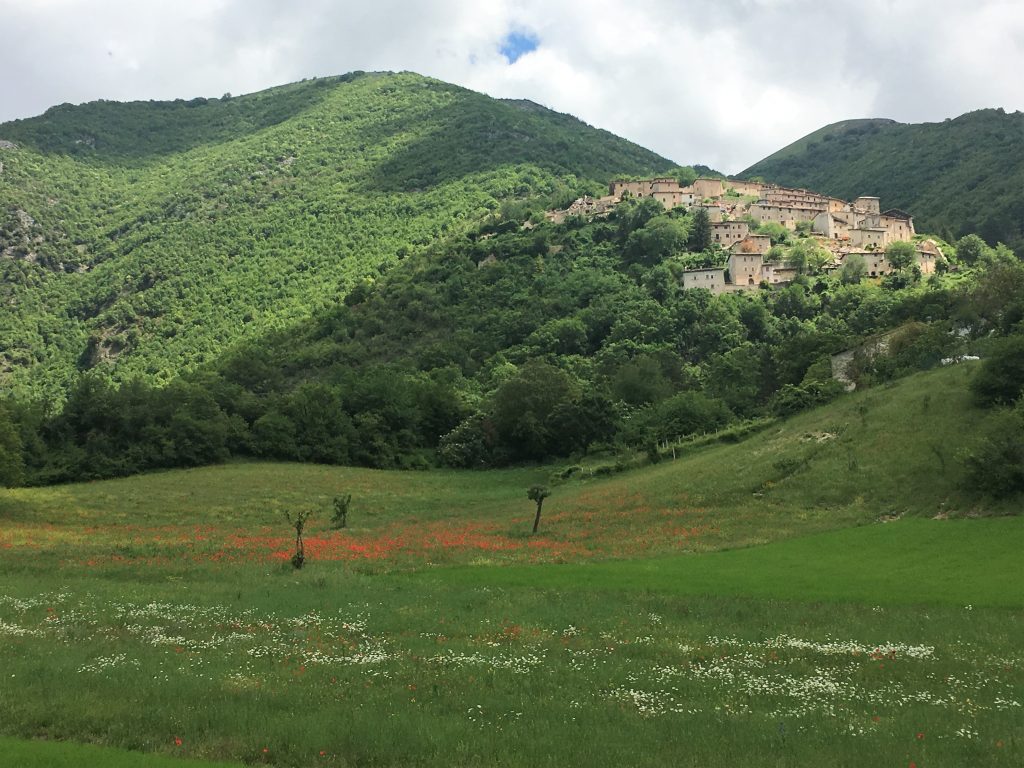 Fields of poppies under one villages seen from our bike ride 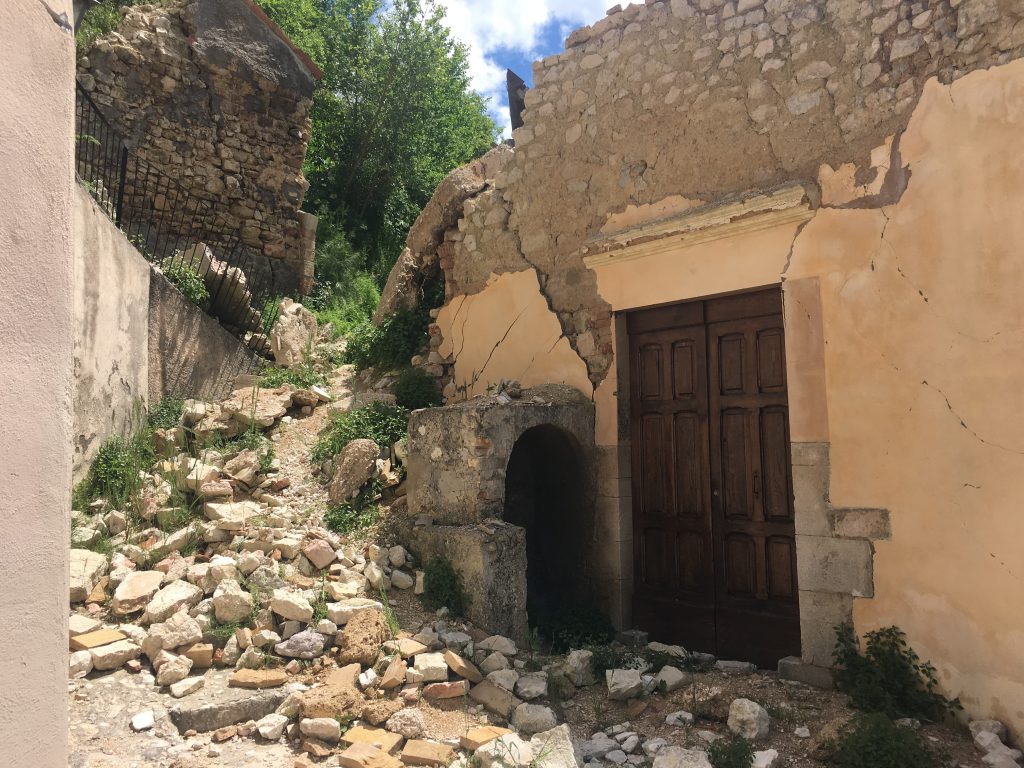 Rubble across the path – note the lovely doors

The walk the following day was more successful, the circuit E12 was marked on the map and took us up along tracks and tarmac roads to Collescille. Here we had to contend with another zona rosso, we stayed as far right as possible, following steps up the side of the village rather than the closed road. We emerged at the top of the village just inside the red zone where we encountered a nice man who assured us that the path was open. We followed the track out of the village, past a ruined tower and up to some shepherds huts. The top of the walk was high pasture where we stopped to sit amongst the spring flowers and admire the views of the mountains. When we’d had our fill of the views and lunch we descended through a grassy valley to Saccovescio, a pretty village but mostly deserted, before we joined a nice easy track back to Preci. 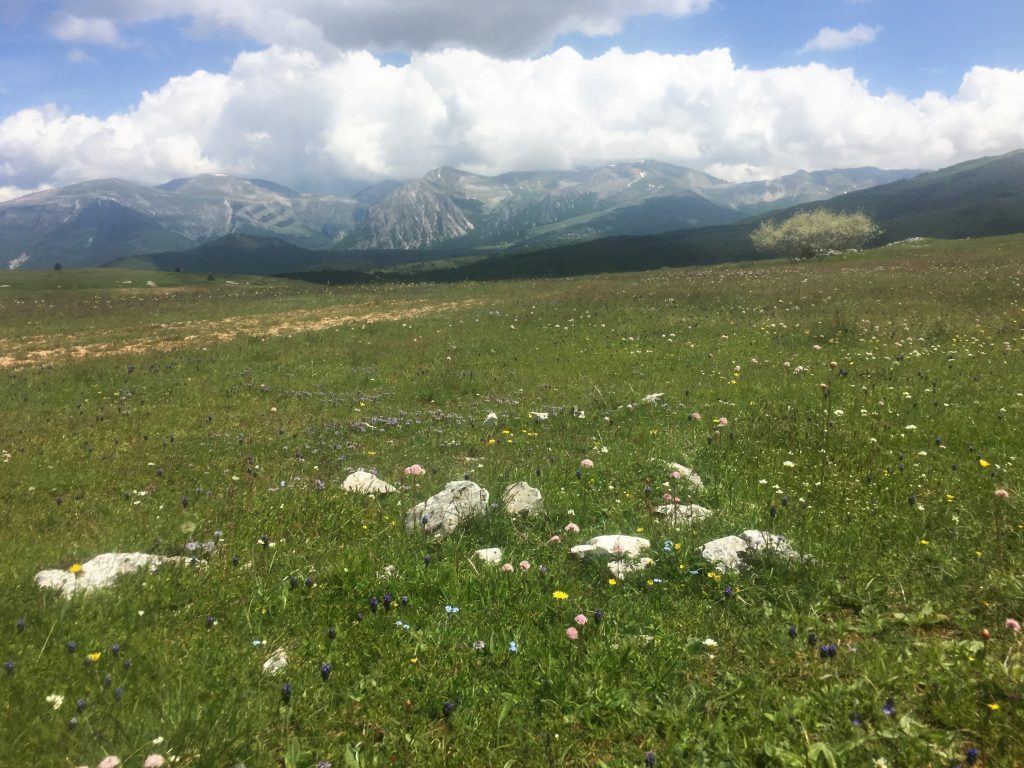 Mountain pasture and distant hills of the Monet Sibillini 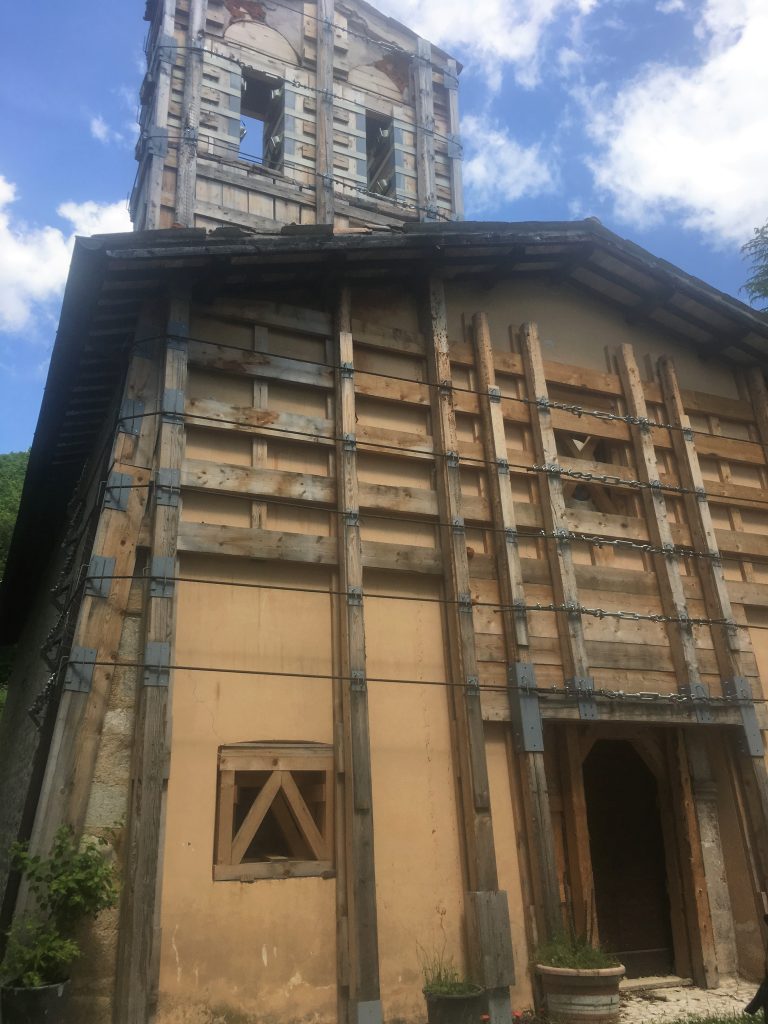 This church was just about being held together, I wonder whether it will ever be repaired

Preci had been a good stop, it’s tricky to get round the area due to the various zona rossi (I think that’s the plural) but it’s worth persevering.