We woke up in Belgium on Wednesday morning, having had a peaceful night’s sleep in this quiet village. The only disturbance had been the man collecting our payment of €7.50 for the night. We’re getting used to having the constant warmth that electricity provides and think we might have to harden ourselves up in preparation for the Alps, but not yet. 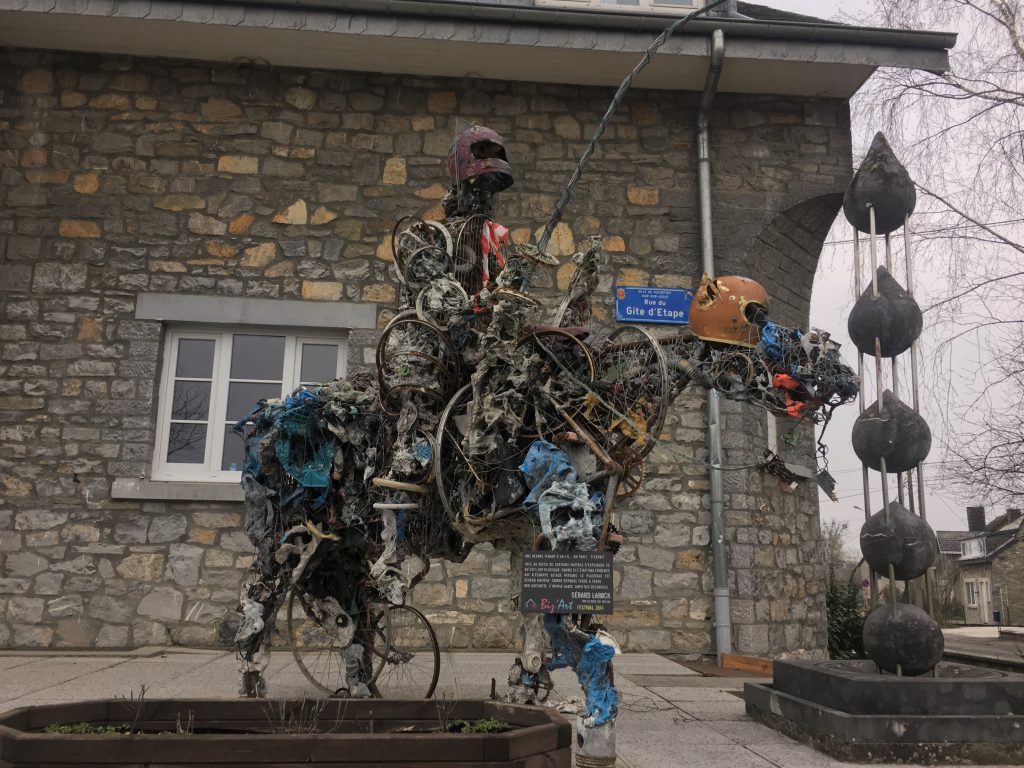 We liked this knight made from refuse, Paul dubbed him the ‘Shite Knight’

We took a walk through the woods that surround the village, following a few mountain bike trails to stretch our legs. The area is limestone country, and the village’s main tourist draw are the caves, but we didn’t find much in the way of interesting limestone features, just slippery rocks underfoot every now and again. 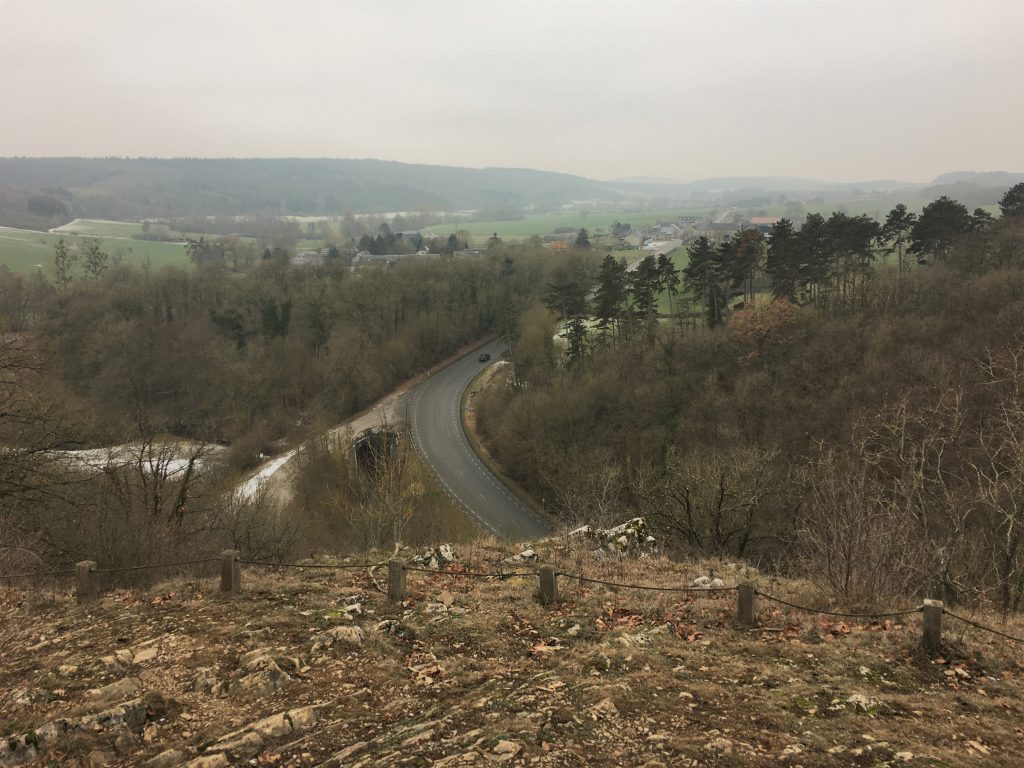 After that bit of welcome exercise we set our sights for Luxembourg. We felt slightly guilty as the only thing we saw of the country (duchy?) was the motorway and an extremely cheap fuel station. We decided we’ll have to return this way so that we can properly add both Belgium and Luxembourg to the list of countries visited.

After Luxembourg it was back to France. The landscape was still snow covered and slightly dreary as we drove south. That’s the problem with motorway driving, it is dull even though the miles can be churned through quickly and the fuel economy is much better. We ended up that evening in an aire next to a marina in Pont-a-Mousson. This was an aire with campsite style facilities, the ten euro fee including hot showers, toilets and free laundry facilities. We didn’t need to use the laundry but I took advantage of the showers to dye my hair before we left. We took a stroll around the town with it’s colonnaded market square, and walked a few kilometres along the cycle path between the Canal and the Moselle river before heading off again. 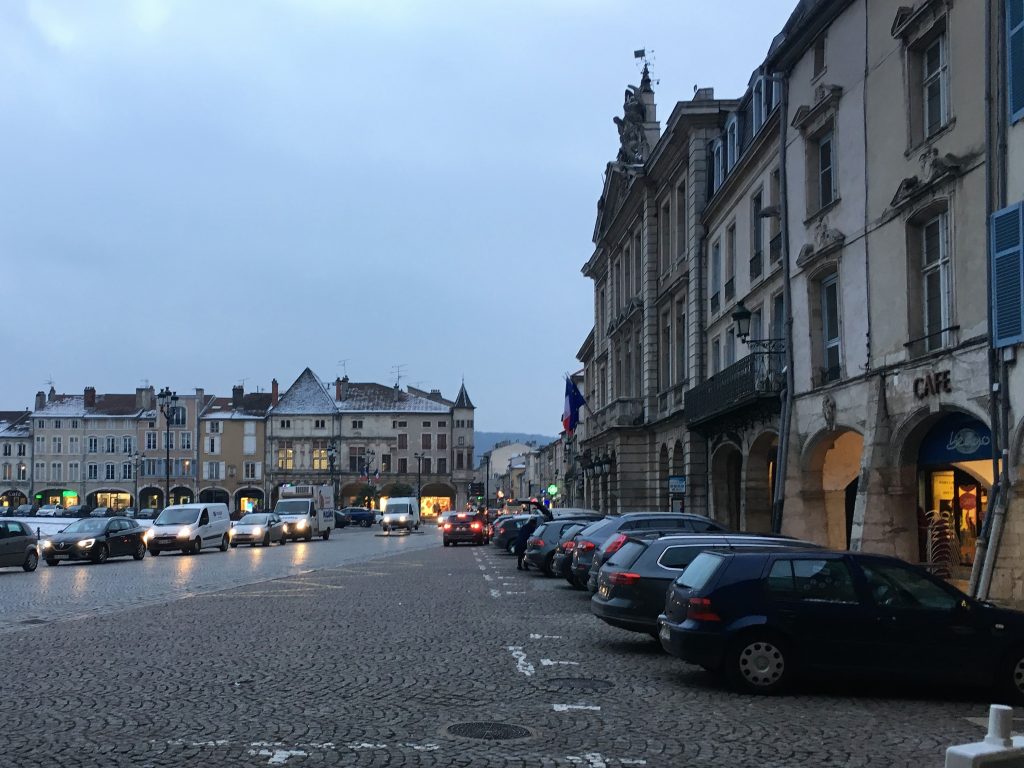 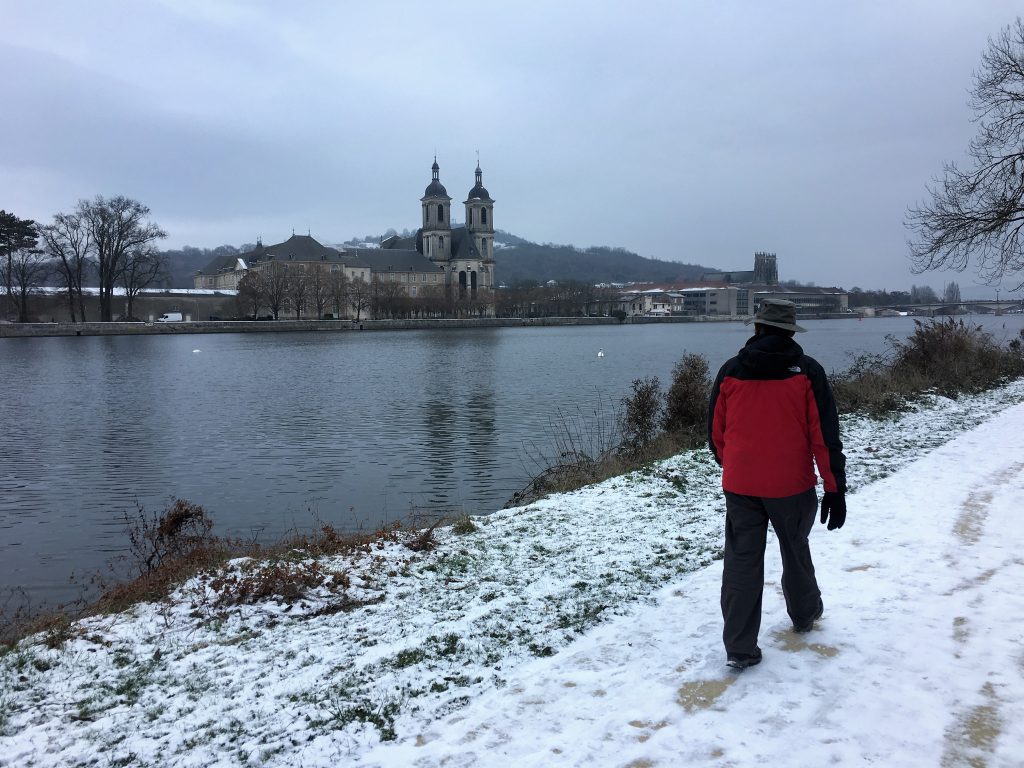 Our next stop was another aire associated with a marina, at Baume-les-Dames. The facilities here were not so good and the cost quite steep (€11.20 including tourist tax), but we had electricity again. The landscape was getting more interesting as we started to enter the Jura foothills, but it was dark by the time we got into the aire and the following morning we woke up to unpleasant drizzle so we decided not to stick around and continued further south. Paul filled our water tank by making eight trips to the indoor water supply with our 10litre container, only to find that the taps were working. The warden had told us that all the taps were off for winter, that will teach us to check for ourselves!

At this point we made a bit of a mistake, heading for electricity rather than the easiest route. We found a free aire in Thoirette – well technically it was €6, but no one was interested in our money – but the route was on smaller roads and involved a lot more twists and turns, ups and downs. I quite enjoyed it as we passed through villages, around farms and between cliffs, giving me a bit more to look at, but Paul had got used to easy driving. 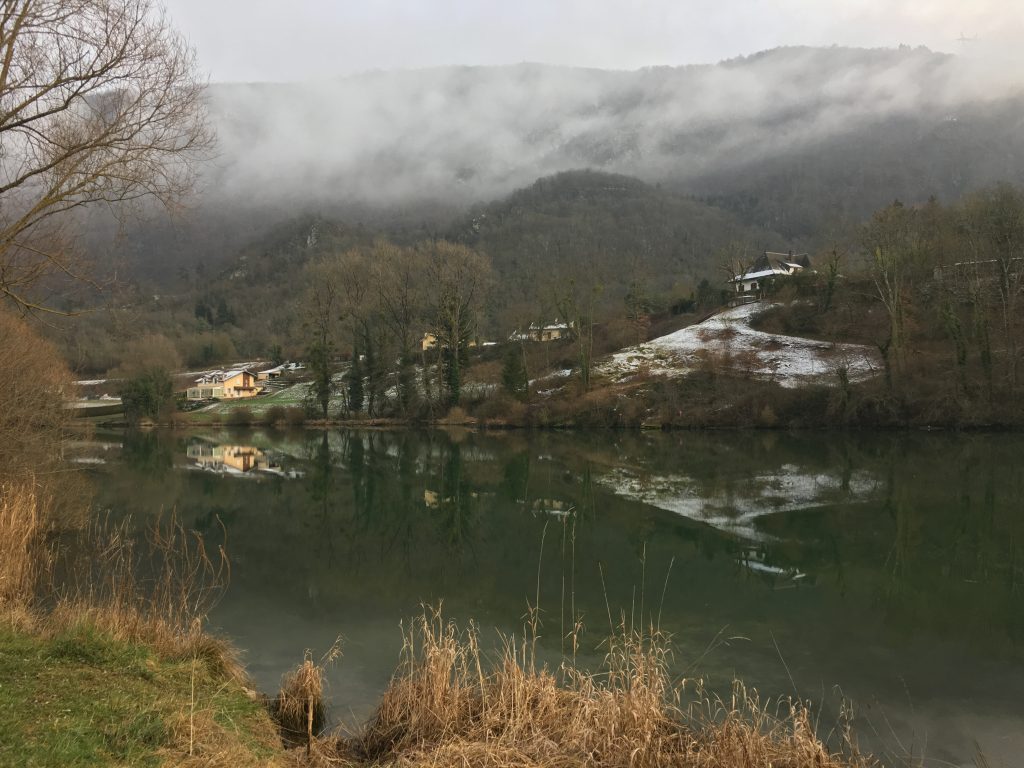 Reflections on the Jura

Thoirette is on the banks of the Jura, and we had a little mooch around but couldn’t find any riverside paths. We passed the night here making plans and finally deciding which ski resort we were going to head to.