After being on the coast for a while we decided to head inland. The town of Gerace was chosen mostly because of it’s location rather than any particular aim to see the place. Our drive inland was slightly confused by some signs that indicated that the main road, the SP1, was closed. We chose an alternative route along single track roads that took us through the valley of olive groves to the south of Gerace and eventually bought us out on the north side of the town. It was a nice drive, but seemingly completely unnecessary. The closed road was actually not the SP1, but one of it’s subsidiary roads. Oh well, we made it safely and Bertie was congratulated for coping well with the steep and winding roads.

We drove south through the Gerace to reach the parking area, a huge car park that had motorhome parking at the top of the hill. The motorhome spaces had free electricity and water, but there was no evidence of waste disposal (we eventually found a sewer manhole behind one of the buildings near the entrance to the car park). Buildings in the car park hinted that further facilities had been planned, but they were empty and shut. The views were stupendous, looking towards the coast at Locri, inland to the Aspromonte mountains and up to the medieval village on it’s sandstone cliff. I expect that there is a charge in the height of the tourist season (there was a little booth for someone to sell parking tickets) but for now this was a lovely spacious car park that was free of charge. 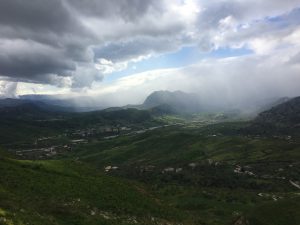 Clouds gathering on the Aspromonte Mountains 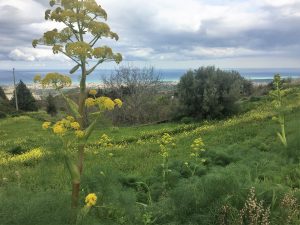 Looking over fennel and wildflowers to the coast 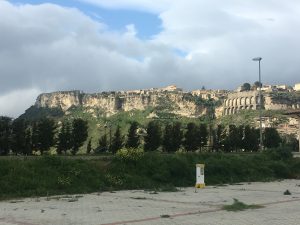 The cliff-top town of Gerace

The town had looked lovely as we drove through it, so we decided to spend the afternoon exploring. The medieval centre sitting on the rocky ridge has picturesque alleys for wandering around, the ruins of a castle guard the end of the ridge and in the centre of the town (or maybe it should be a city) is the largest cathedral in Calabria. Everything was pristine, the golden sandstone of the buildings shone in the sunshine and the smooth flagstones of the streets added their lustre, creating a sense of warmth. The views from the top of the town were worth the walk, but there is also a small land train that can transport you around – today it was busy ferrying a school trip of loudly chattering and singing teenagers around the village. We popped into the cathedral, a couple of euros each gained us access to the small museum in the crypt as well as the cathedral proper, a very austere Norman style building with a highly ornate alter as counterpoint.

While we stood on the belvedere by the castle, looking out over the view, we spied a path winding up over a hill opposite. Simultaneously we said that  it looked like an interesting cycle route. So the following morning we set out to cycle out of Gerace to the north, through Prestarona and then do a loop through Santa Caterina, Agnana Calabria and the hills behind.  We had underestimated the terrain for this ride, there was a steep drop off to Prestarona which we whizzed down, and then a hearty climb up the other side. Even with switchbacks it was hard work and needed several pauses to regain our strength. Of course then we needed to reverse the process, but luckily there we found a relatively gently sloping road in Prestarona which allowed us to climb back out of the valley with our pride still intact. The circular part of the ride covered ‘roads’ that were shown on google but were barely tracks, alternating grassy sward with deep ruts in the sandy soil. At one point as we zigzagged down the slope I spotted Paul going head first over his handlebars, his front wheel caught in a deep hole. Fortunately it was a slow-mo fail and he wasn’t hurt. Despite the difficulties it was a great bike ride, but very slow over the rough and steep terrain. We got back to Bertie aching and exhausted, and decided to spend another night on this sosta, taking in the views and relaxing our muscles.

This has to be one of our favourite parking spots in Italy so far for the views. We always seem to find something special when we make a foray inland and this was no exception. 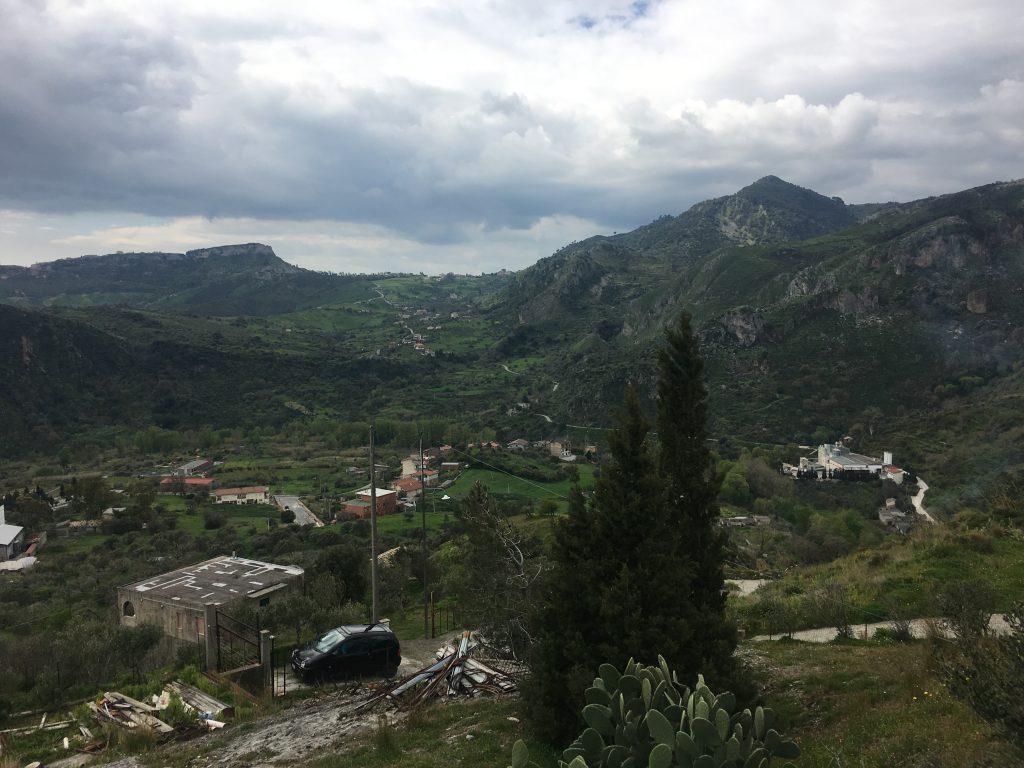 Crinkly hills and valleys around Gerace