We spent the next day driving and with a couple of hundred more miles under our belts and the temperatures slowly rising into the low thirties we decided we needed to find somewhere we could cool down. This ended up being a large free aire at the park area of Lac de Saint-Pardoux.

Sheltered under the pine trees, in well marked out spaces, we could cool down a little. The lake offered swimming in blissfully cool water, the beach nearest the aire was busy (but not packed) with families enjoying a warm Saturday afternoon. We wandered around the area to decide whether we would stay or move on the following day. There was a large swimming pool, the inside pool was open but the outside area with water slides was closed for the season, there were basketball and five aside pitches, a play area for younger children, a high ropes course for older kids and a bike ride around the lake’s higgledy-piggledy circumference. 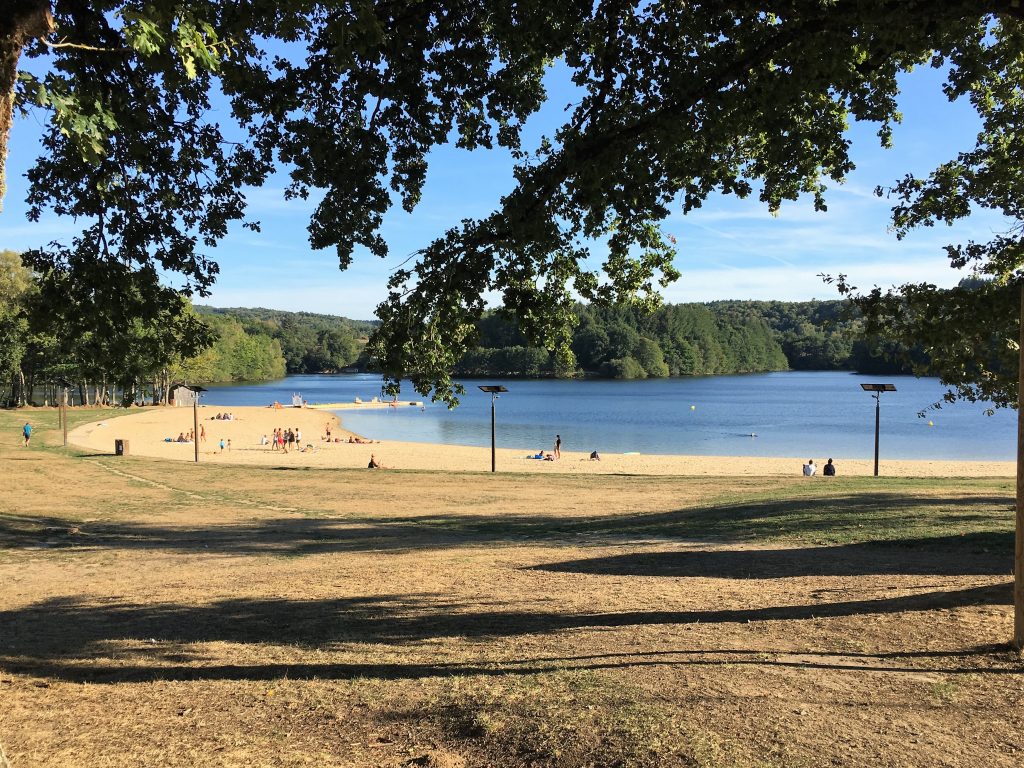 Relaxing on the lakeside beach

We decided that a gentle bike ride might be a nice idea the following day, the notice board gave a distance of 24k, so not a long ride, it was mostly under the shelter of the surrounding trees and we could take our swimming stuff for a dip if we overheated.

What we hadn’t realised was that the bike ride was not all on the wide well surfaced trails that we could see from the Maison du Lac de Saint-Pardoux. I suppose the pair of serious mountain bikers making their preparations in the car park should have warned us, but we just assumed they were either off on a different path or took every ride far too seriously.  As we set off, making a couple of false starts before we found the route south around the closed high-ropes playground, we realised that at least some of the way would be on dirt tracks. In fact it ended up being a fun mountain bike route with lots of short ups and downs, narrow single track, rocky outcrops and roots. One uphill section was so steep that I had to get off and push and spent several minutes struggling to get any grip with my trainers and wondering whether I would just have to give up and slide back down to the bottom of the slope. 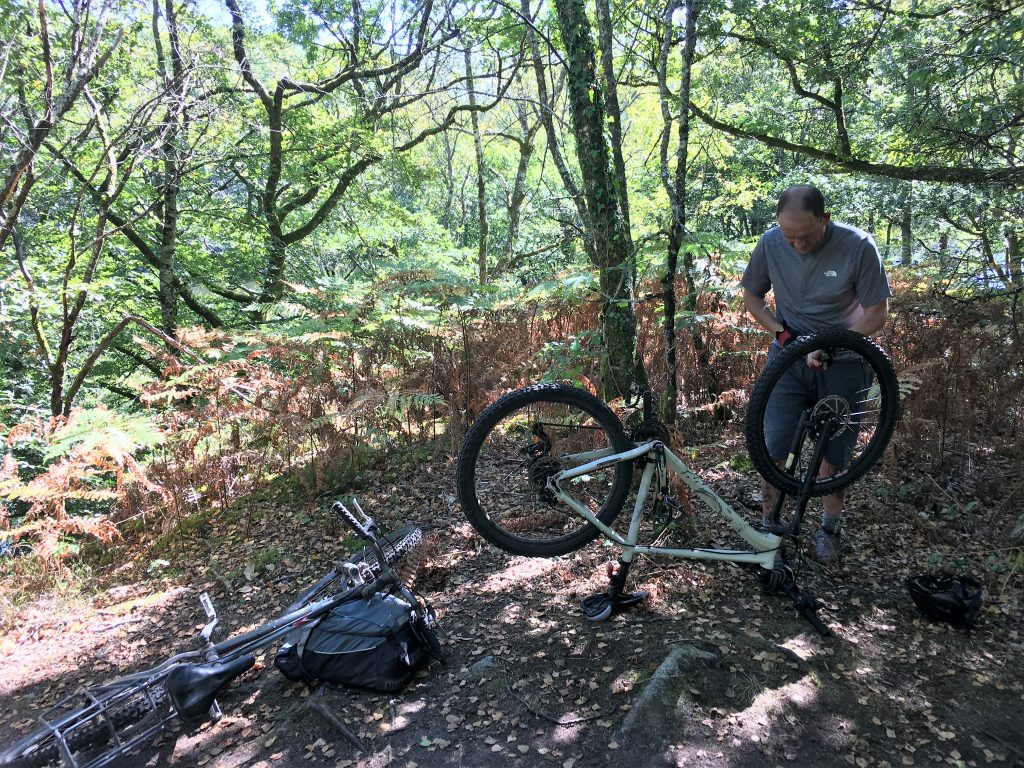 As we approached the last part of the route, where the cycle path was due to cross a narrow stretch of land near Puyperier we hit a problem. The path was barriered off with diggers and ditches behind fencing. We attempted to find a way onwards, but increasingly overgrown paths led us onwards to a dead end where we encountered a group of orange clad hunters with their slavering dogs. I know that might seem a little over dramatic, but one of the hounds had blood on it’s jaws and obviously didn’t like bikes. I leapt off my bike and put it’s frame between me and the dog as one of the hunters came and dragged it away. We let them move away into the undergrowth and waited until we could no longer hear the barking and the sound of horns before we retraced our steps back to the Santrop bridge where the D44 crossed the lake and we could get back to Bertie. 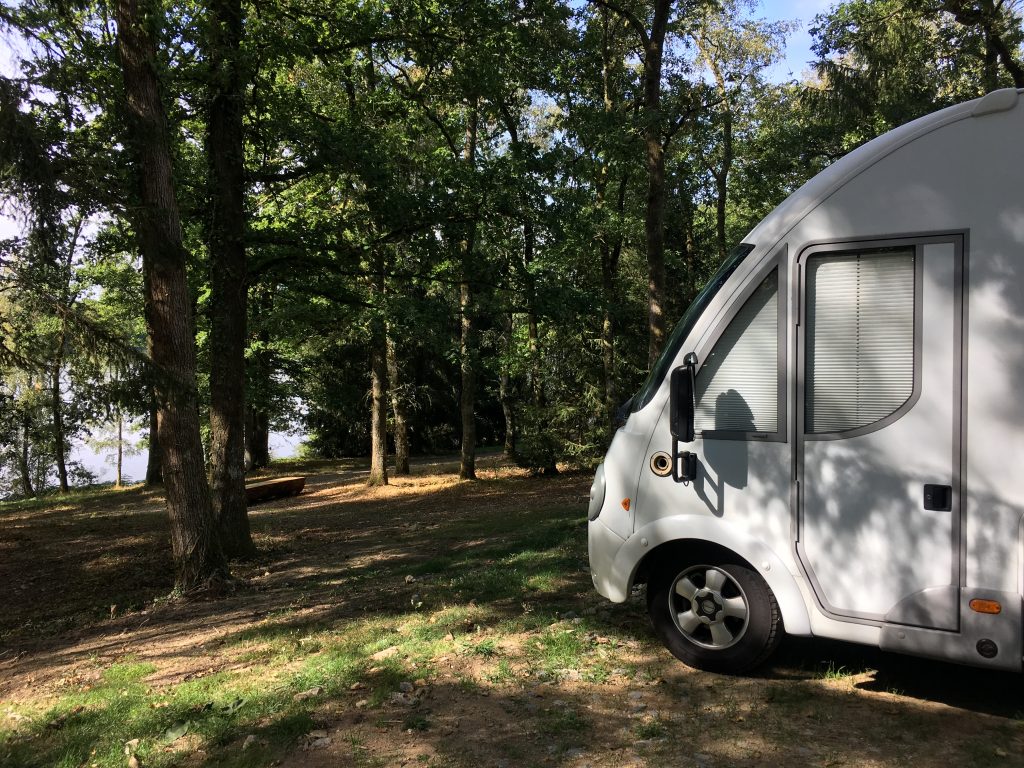 Bertie enjoying the shade of the pine trees

We stayed for a second night in this peaceful and comfortable aire, relaxing under the trees in the evening warmth with a glass of something alcoholic and listening to the hooting of owls. A welcome break on our long journey south. 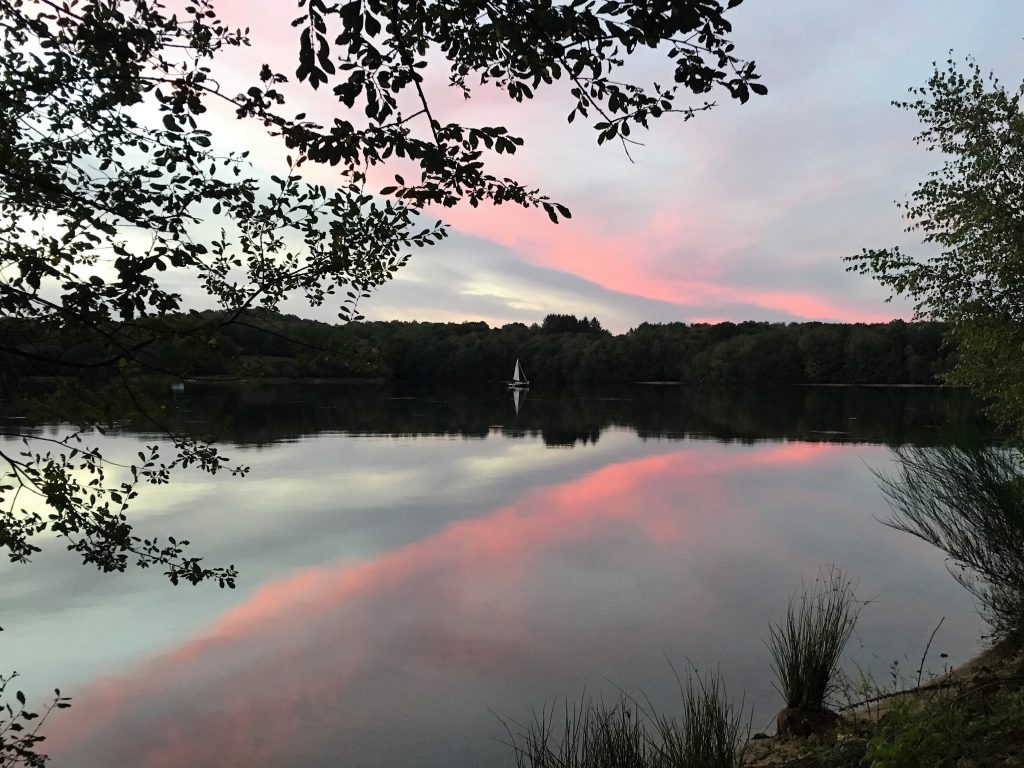 Sun setting behind us