Unintentionally we made a poor decision today – we had to choose between another day lazing at Fidden Farm and maybe popping over on the ferry to Iona, or moving on to do one of the longer walks on our wish list. We chose to move on as we knew the weather was then going to be pretty poor for three or four days and I was twitchy about wasting the sunshine.

So we chose to drive part way back down the Ross of Mull and then over to Carsaig to do the Carsaig arches walk. Probably we should have been warned when we saw the signs at the start of the road to Carsaig; ‘weak road’, it said, max weight 13 tonnes (and then another sign which said max weight 3 tonnes with the 1 added using a black marker, we assumed it wasn’t just graffiti). We are just under 4 tonnes so in theory we would be fine, and we’d read reports of other motorhomes going down to Carsaig, so we went for it.

The road ran uphill through woodland until it crossed a cattle grid and we were out in the open, following the contours halfway up the side of the valley. The road had a tenuous hold on the side of the hill, slumping in sections as if it just couldn’t be bothered to stay in place. Bertie sat precariously on the tarmac straddling the grass running along it’s centre, we hoped we wouldn’t have to use any of the passing places which just looked as if someone had tipped a truck load of hardcore off the side of the road. It had the look of a road that was approaching it’s old age, one day it would be a road no more, just a track, and eventually it would disappear from maps and atlases completely.

As we approached the coast the road got steeper, running through woodland and over a couple of streams which were further contributing to it’s decline. Finally we got a glimpse of the parking spot – another motorhome was there so we weren’t the only nutters. We rounded the corner into the parking spot and it was FULL. Yes, we had come all this way only to find there was no space for us (full was one motorhome and three cars) in this gravelled potholed parking spot on a steep downward incline.

Paul insisted on a cup of coffee at this point to calm his nerves. As he stepped out for a cigarette I put the kettle on – and had to hold it in place to stop it sliding off the burner. We walked around Bertie with our hot drinks trying to work out whether there was some miraculous way we would be able to park without blocking everyone in. Then we walked around Bertie again figuring out how we would reverse out of here without burning out the clutch or catching our undercarriage on the lip of a pothole.

As we started to back out of the car park a 4×4 was coming down the road towards us with a trailer full of logs – that was all we needed – but he pulled over onto the mud to keep out of our way as we backed out with only a slight smell of hot clutch.

The return drive wasn’t too bad, conducted in silence – the best policy when both of us are tense. In fact the whole drive would probably have been a bit of a fun adventure if we had managed to get parked, but driving all that way only to have to turn around made it highly frustrating and exacerbated our stress levels.

We didn’t have a backup plan for the day so once we were back on properly maintained tarmac we talked about what we would do next. With a long spell of poor weather predicted, and on a bit of a downer because of our day so far, we decided that we would leave Mull the next day and so drove up to Tobermory. There were a number of forestry commission parking places along the road that runs to Tobermory, but these all had ‘no overnight parking’ signs in them and were very close to the road. We stopped in one of them and saw our first seals on Mull. Eventually we parked just outside Tobermory in the large forestry commission area of Aros Park. 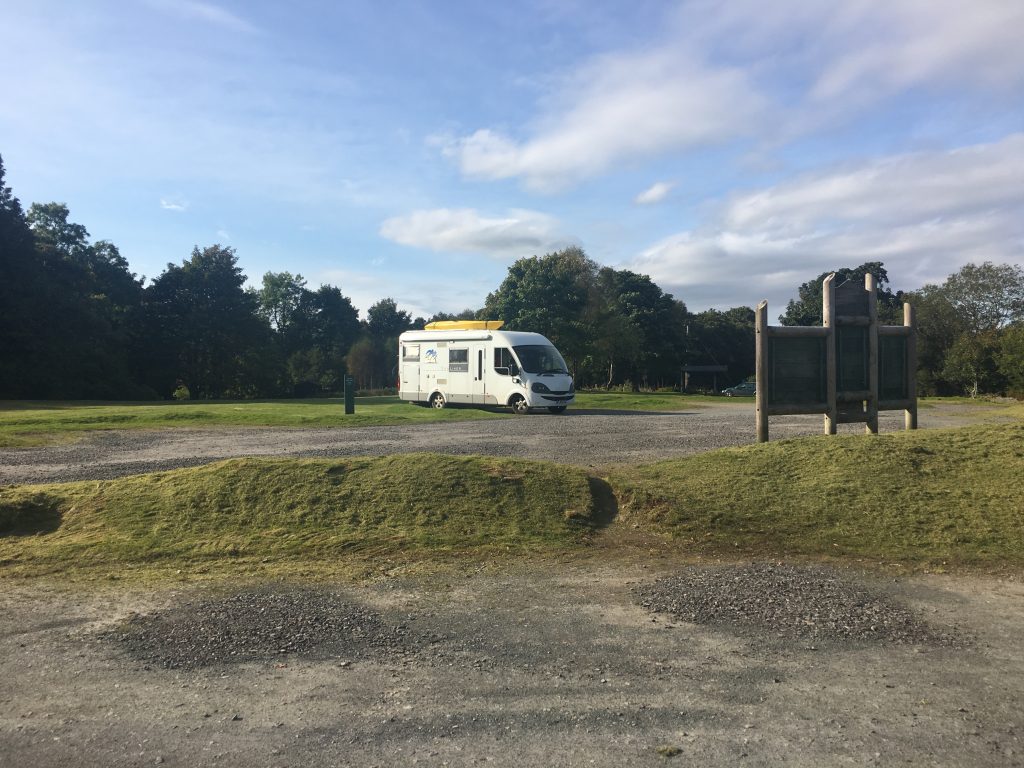 Bertie all alone at Aros Park

Although there were also ‘no overnight parking’ signs here we considered there was a low chance of being moved on, the car park was empty and out of sight of residential areas and roads; no one was going to see us and it was unlikely that the ranger would do night time rounds just to oust us. Aros Park was once an estate which was bequeathed to the forestry commission, the car park was the site of the house which was demolished in the 60’s. There were lakes and paths and picnic areas and a small pier with views over the bay to Tobermory. It was really quite pleasant, not the dramatic walk we had been hoping for, but not a bad place to spend our last afternoon on Mull. 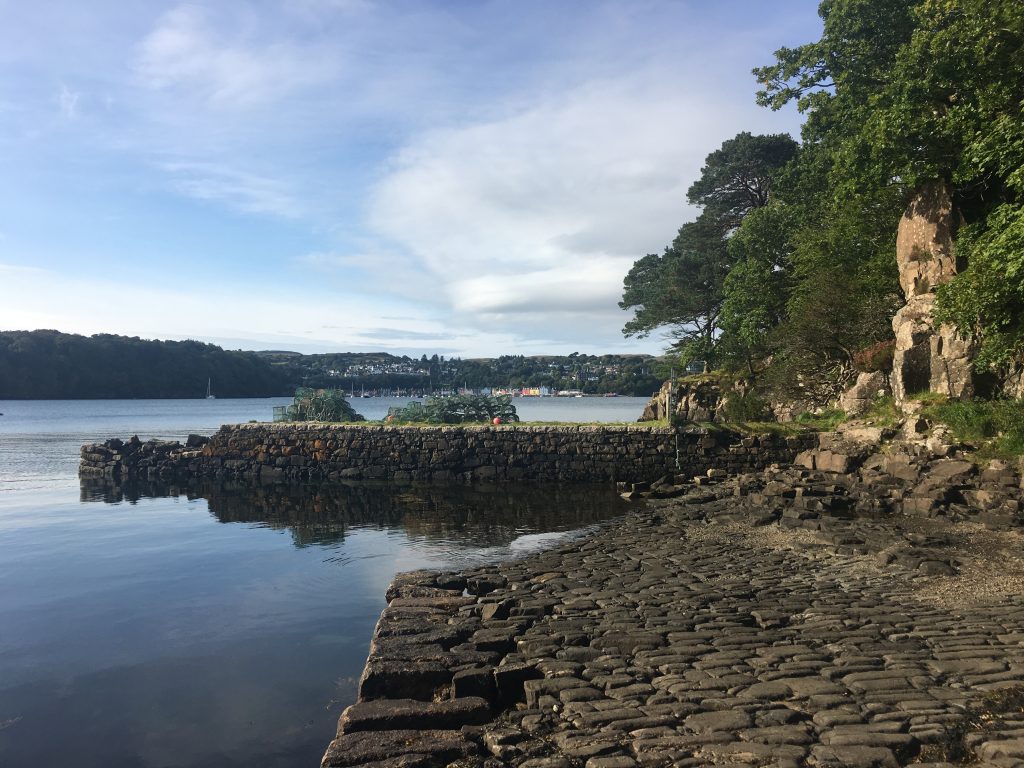 The old pier at Aros Park

We walked into Tobermory late that afternoon and treated ourselves to posh fish and chips from the van on the harbour. I had scallops and Paul had calamari. It was yummy and warming and we ate it sitting on a bench looking over the harbour. We washed this down with a couple of pints before heading back to Bertie in the twilight feeling more relaxed. 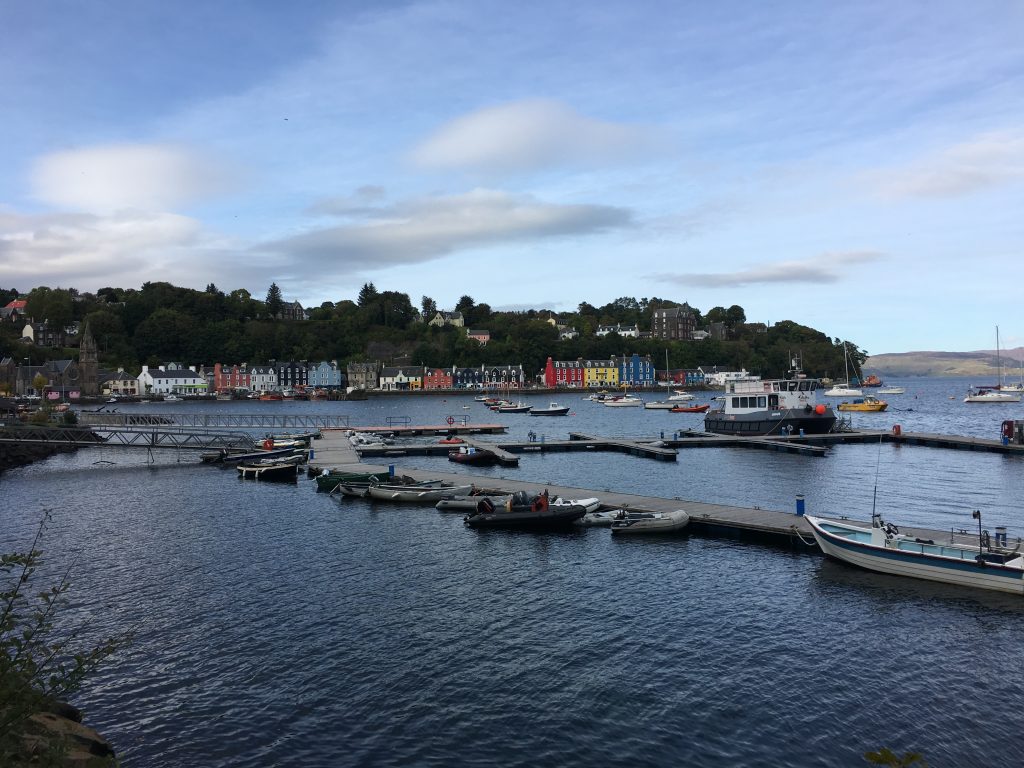 2 thoughts on “The Road to Carsaig”