We had discussed our plans for the next few days, feeling torn; should we pootle down through France or should we get to Spain as quickly as possible? We didn’t want to do really long driving days but we did want to get some good weather. We  couldn’t really decide and so we ended up doing an odd zig zag down the north west side of France initially before we settled on an aim. The weather forecast indicated a short heat wave mid-week and so we would continue travelling longer distances until the weather improved and then slow down and enjoy our normal style of travelling as the weather improved. We opted to avoid toll roads completely, which the Sat Nav managed for us despite it’s other shortcomings.

We drove along roads through extensive fields and farm lands, round many roundabouts as we navigated Normandy villages with their timber framed buildings and up and down long hills, taking in three overnight stops as we made our way south; a large parking spot in the village of Bosc-Geffroy, also the bus stop and an obvious meeting place for lift sharing in the morning, a motorhome aire at the Jardin de Broceliande and a supermarket aire at the Super U in Marans, not our planned stop but the best we could do following some road closures and remarkably peaceful considering. On the way we refuelled, stocked up with fresh groceries and re-filled the gas canisters.

The weather, pretty good anyway, was improving as we headed for Angoulins so time to slow down and start enjoying ourselves. We had picked this spot by the sea to allow us to stretch our legs and get back into the swing of things. The sat nav really didn’t want to play ball though. The first indication that something was wrong was when we hit a sign saying nothing over 3.5T, the sat nav wanted us to carry on and we followed it blindly into a one way system. We saw the size of the roads and hastily escaped back towards the main road. Again we tried, picking a slightly different way in, but again we were directed down tiny roads, leading us to one very small gap between a scaffolded building and parked cars. It took all of Paul’s driving skills to navigate through with a couple of inches to spare as I walked in front, tucking car wing mirrors out of the way and providing direction as we squeezed through. Finally out of this predicament we were still no closer to getting through the one way system and I was all for giving up and going somewhere else, anywhere else! But Paul wouldn’t be thwarted now he’d started – we’d seen pictures of large motorhomes parked near the beach so there must be a way! On the last attempt we had seem some signs diverting vehicles that were over 3.5t, so on the final attempt we followed these. Like many road signs they were elusive, but with the help of the signs, bus stops (if a bus can get through so can we) and google maps we made our way to the parking spot, outwitting the sat nav and the one way system. 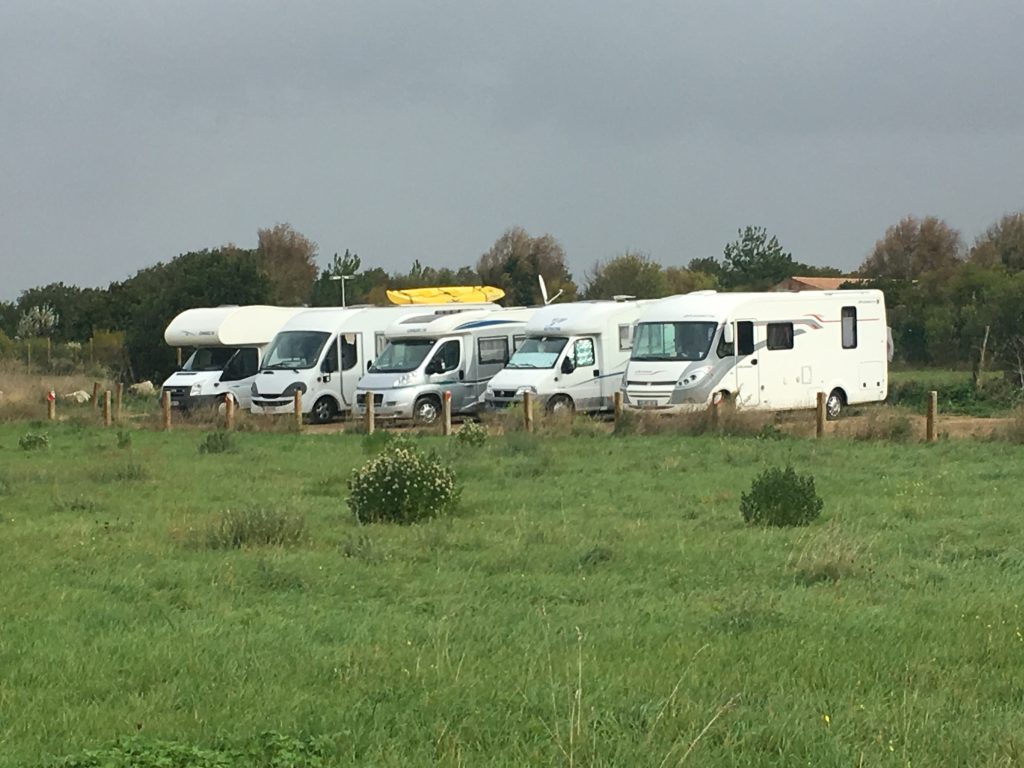 Our parking spot are Angoulins

We parked in one of the remaining spaces and had a quick cuppa before heading out to walk towards the headland. The tide was a long way out and we could see people gathering shellfish on the tidal flats, the rocks of the fore-shore were covered with small oysters and we imagined they were probably bigger further out to sea, but we couldn’t get very far due to sticky mud – definitely a need for wellies or waders. 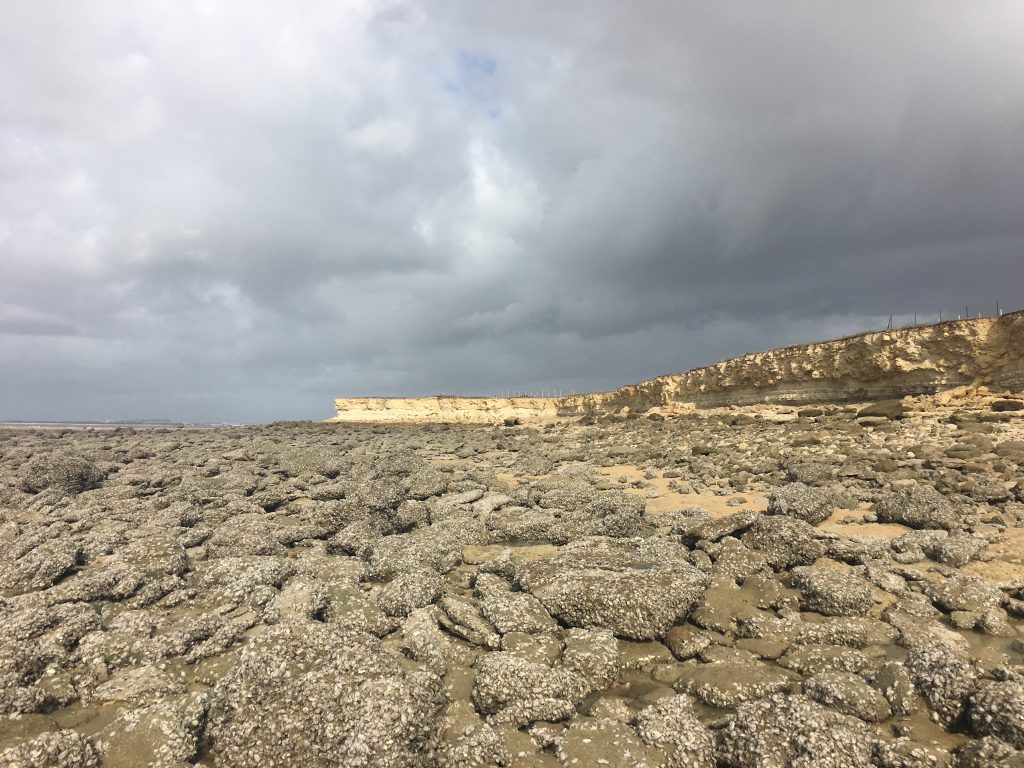 As we walked to the far end of the beach we came to fishing huts on stilts above the water, these carrelets looked high and dry at low tide as we walked around their feet to inspect the mechanism used to lower and raise the large square nets.

We didn’t get much further before the heavens opened, this part of France was picking up the edge of storm Brian and between brief sunny spells dark rain clouds were dropping heavy rain. We went back to the van for some lunch while the rain showers continued and didn’t head back out again until later that afternoon when we managed a circular walk around the headland and back through the village, seeing the beach a high tide this time with some of the carrelets now in operation and wind and kite surfers enjoying the strong winds. It was amazing how even a couple of short walks left us feeling refreshed after our three days of driving. 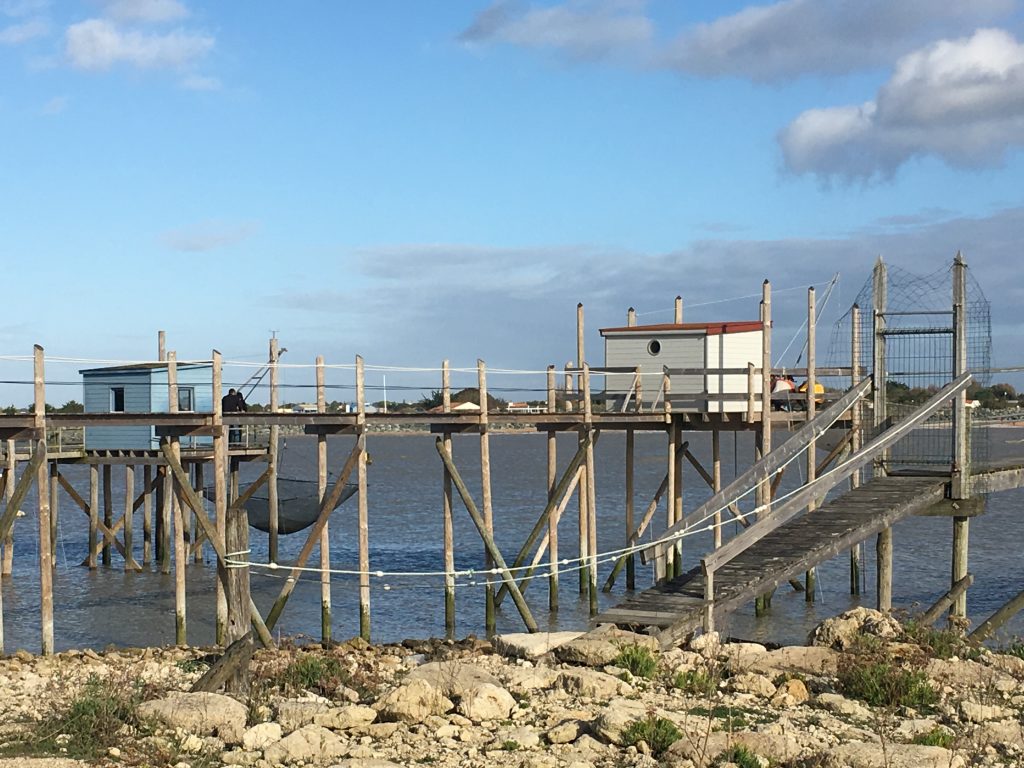 Carralets in operation at high tide

2 thoughts on “Making Tracks through France”