True to our expectations we ached when we woke up. Our calf muscles were tight, thighs were sore and getting out of our raised bed was a struggle. When we finally managed to get up and moving we knew that we couldn’t take anything particularly energetic, so we decided to do a bit of shopping. We needed a small top up of groceries, but more importantly we needed a few bits and pieces for the bike, including new spare inner tubes as our many-times patched inner tubes were no longer holding air.

We tapped a few of the local outdoors shops and managed to pick up what we needed including a top up with fuel in the competitively priced local Intermarche. After lunch we looked at the map and decided to move onwards and very much upwards, to 2001m above sea level  Our destination was the Col de Pailhères, a spectacularly high point on the road between Ax-les-Thermes and Mijanès. The road from Ax-les-Thermes is the less spectacular ascent, longer, more gradual and two lanes most of the way. When you look down the descent to Mijanès it looks far more ‘exciting’, a single track succession of snaking turns. You can see why this is a cyclist’s favourite, whether pedal powered or motor driven. 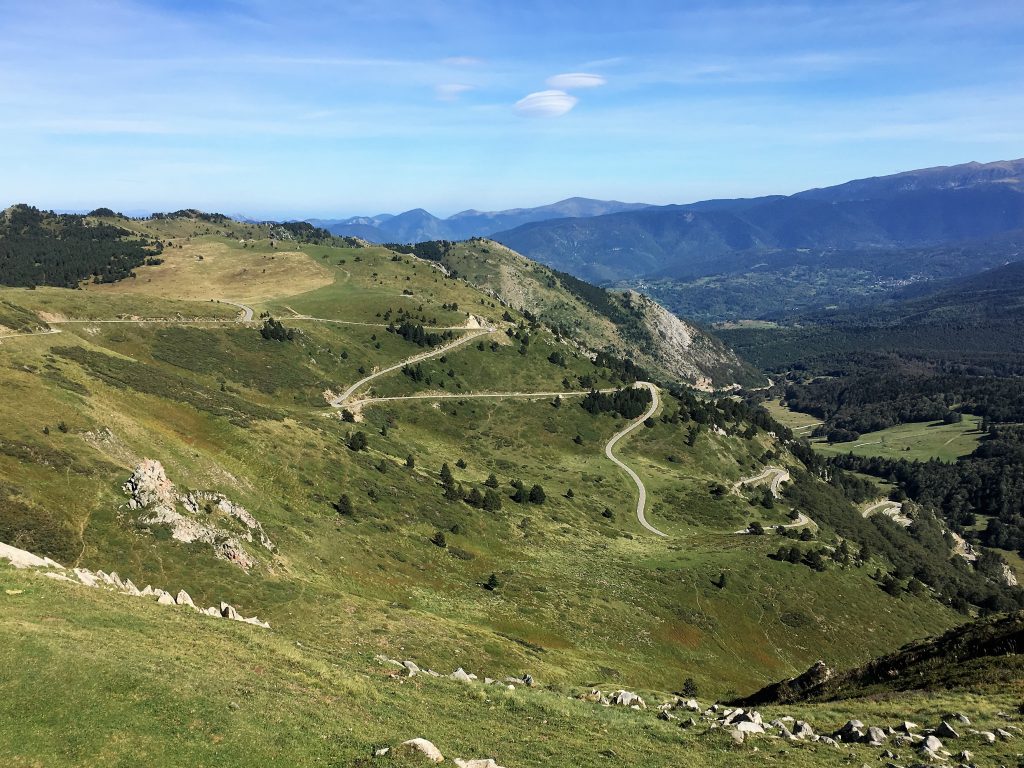 The twisty turny road to Mijanes

We stopped at the large car park just below the col and stretched our still-aching legs with a short walk to the top. Here we were above the tree line and had lovely views. Horses were cropping the grass on the nearby moorland, bells jangling gently as they wandered around. After our short walk we returned to Bertie and sat and took in the views, we didn’t have the energy for anything else. As with most lazy days I indulged my love of cooking and made some apple tarts for dessert. 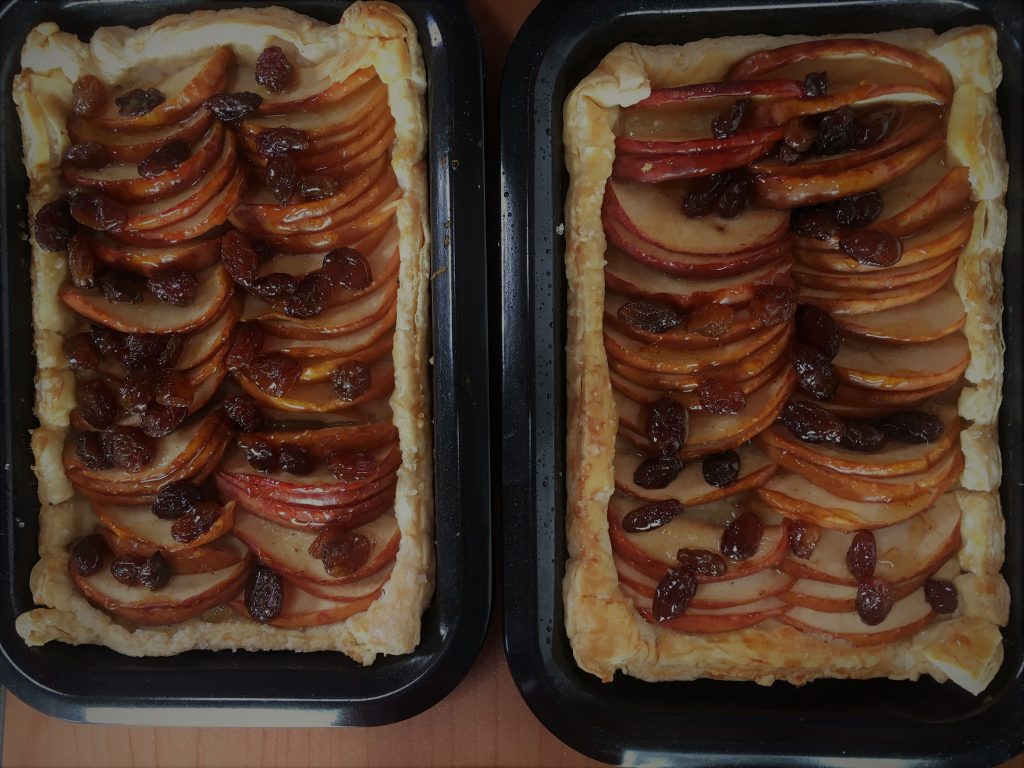 The following day dawned sunny and a little chill. The reason for choosing this parking spot wasn’t just it’s altitude but also it’s access to a circular walk that takes in the Pic de Tarbésou at 2364m. It was a Sunday and if the previous day was anything to go by this was going to be a busy spot. We started as early as we could to try to beat the crowds, but even so there were plenty of people turning up, whether for a Sunday stroll or for a longer randonnée.

This was a justifiably popular walk, some people just tackling the Pic, some heading in the opposite direction to end up having a picnic by one of the mountain lakes, and some – like us – walking the whole circuit. It was interesting all the way round without too much constant ascent or steep descent. A perfect way to stretch out our tired legs.

We decided to go anti-clockwise so that we got the steepest ascent out of the way sooner rather than later. After the initial stretch of path following red and white trail markers (GR 7B) across the moorland close to the road we reached a junction where we took the middle of three paths, this ascended the most direct route to the Pic (the right hand route took a slightly less direct route but came in to the Pic along the ridge, which actually looked better in hindsight). The high starting point meant that the Pic de Tarbésou could be topped with relatively little effort and as we slowly warmed up on the ascent we met a few people who were on their way down, having achieved their day’s ambition. I expect they were off for a nice Sunday lunch somewhere. 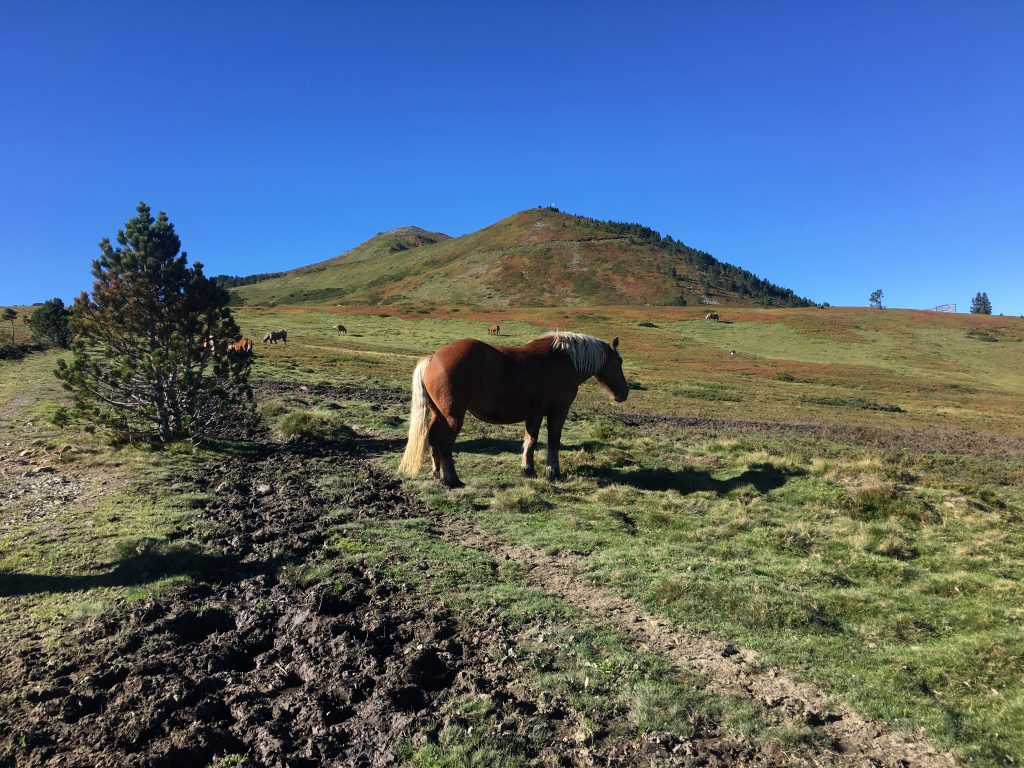 On the way to the Pic de Tarbesou

After the Pic we were seduced by the clear path that led straight ahead, but actually the onward path led sharply downwards and to the right (following yellow markers) where it picked up the top of a nice undulating ridge with lovely views south west to the Orlu valley and the softer side of the Dent d’Orlu. From the ridge we stopped to watch a large bird soaring overhead. A quick look through the binoculars and we confirmed that we had spotted our first Lammergeier; with it’s rust orange body and odd diamond shaped tail it was unmistakeable. These birds (also called Bearded Vultures although they are not strictly members of the vulture family) are fairly rare but there is a good sized population in the Pyrenees – they live on a diet that is mainly bone, getting their nutrition from bone marrow by dissolving the bones in pH 1 stomach acids. 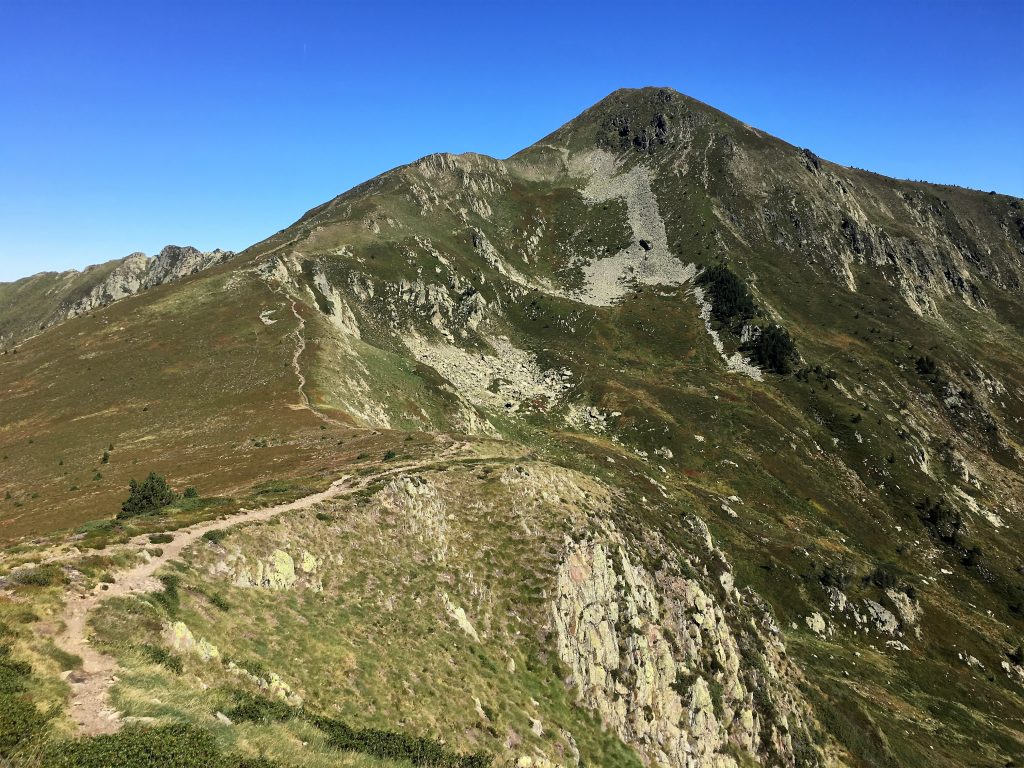 Looking back towards the Pic de Tarbesou from the ridge 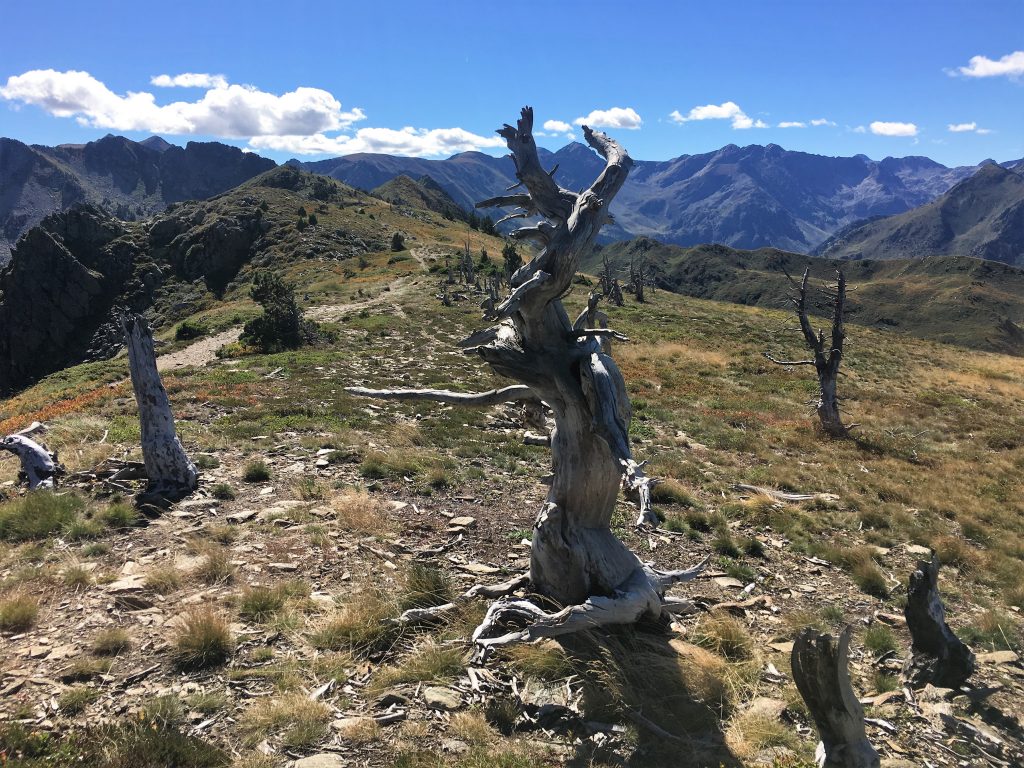 Blasted trees on the ridge, with the Orlu valley in the background

A couple of kilometres later we had to leave this ridge, there were lots of short cuts here, but we chose to continue to follow the yellow markers that led down from a small col. A quick descent took us to the first of the lakes, the Etang Bleu, where groups were picnicking by the shores of the lake, once group passing round a bottle of wine they swigged from enthusiastically. The weather had warmed up nicely and people were sunbathing, but we didn’t see anyone braving the cold waters. 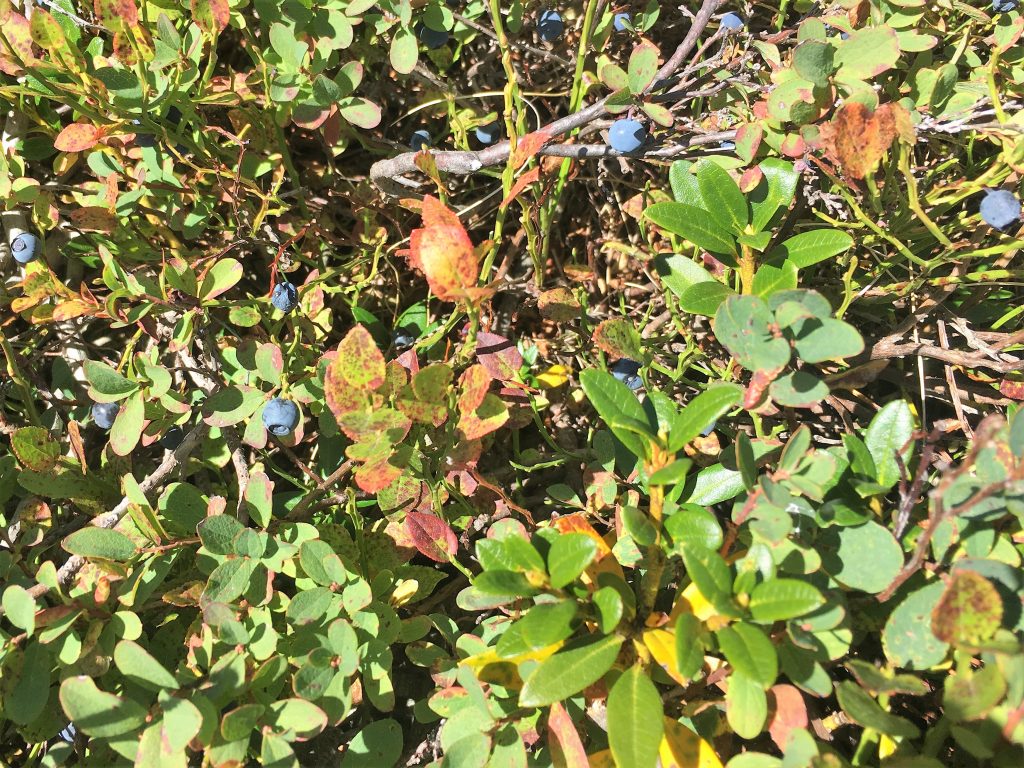 We were now back on the GR 7B and following red and white markers northwards back to the parking spot, the next feature was another lake – the Etang Noir – equally popular and spectacularly set against the backdrop of the ridge we had just been walking. 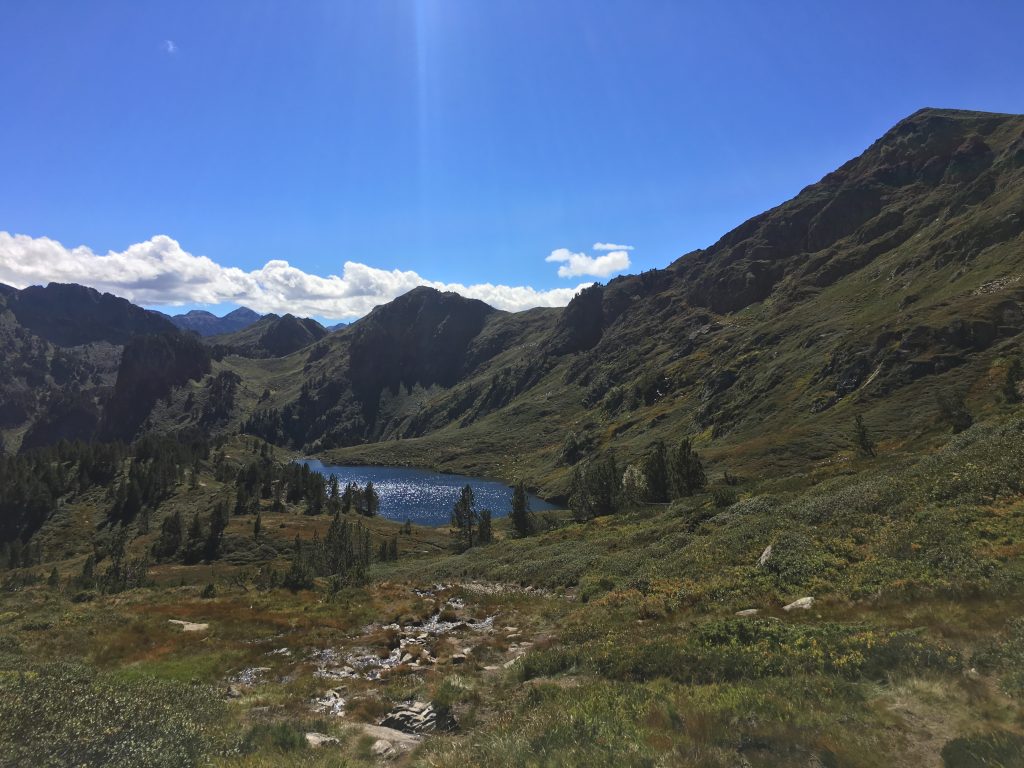 After the Etang Noir we had a short steep climb back up to the Col de la Coumeille de l’Ors (I think that means something along the lines of a bear’s neck), just below the Pic de Tarbésou. There were a few families on this path, obviously returning to their cars after a lakeside picnic, more than one child was grizzling at having to climb the hill in front of them. We gave the parents sympathetic looks as we passed – I think they were sympathetic, although they might just have been looks of ‘thank god that’s not me’ relief. 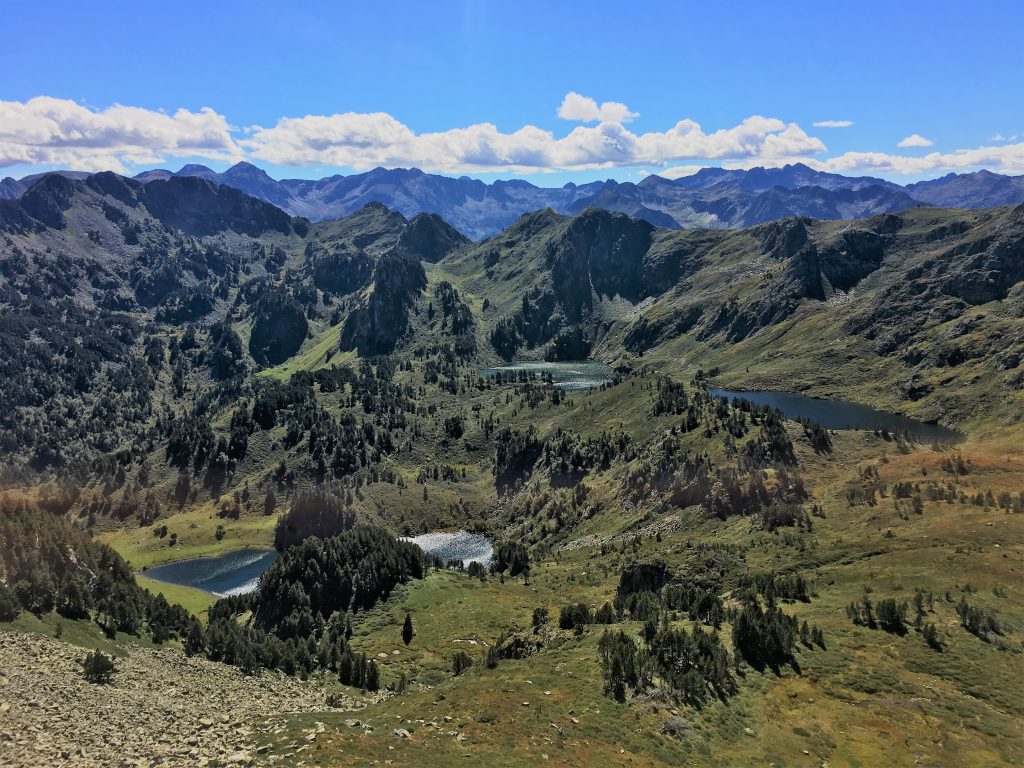 After that it wasn’t long before we had descended back to the first junction where we could pick up the path back to Bertie. 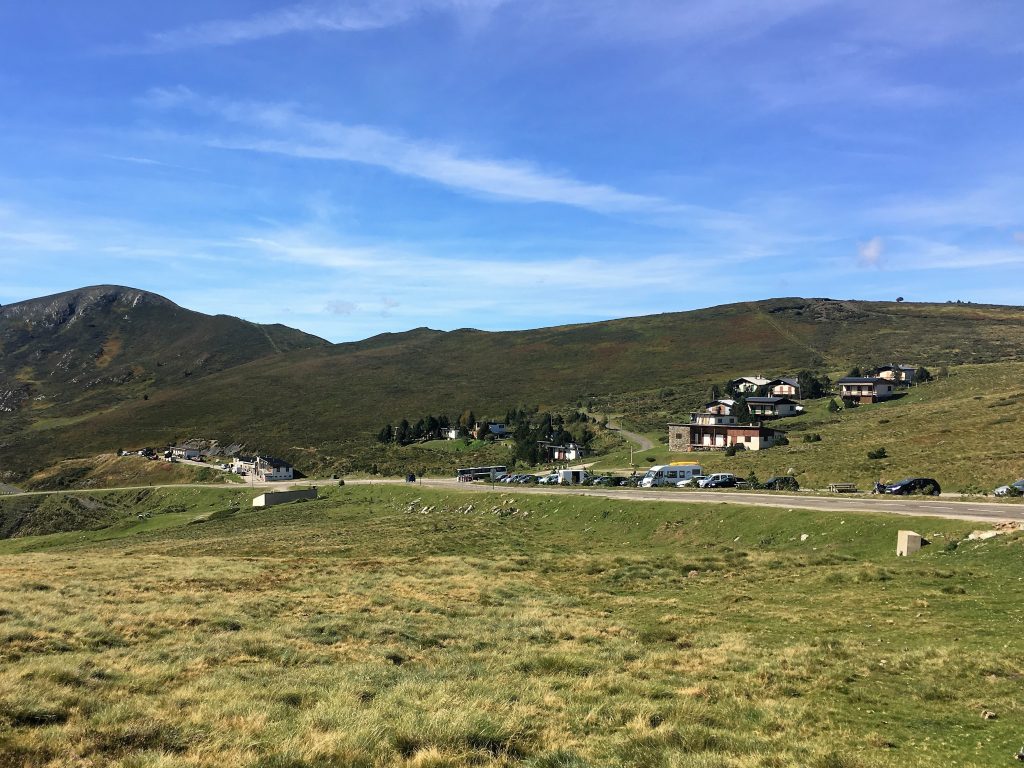 Bertie parked up just below the Col de Pailheres