Valencia. For a few days we’d been considering it as our terminus for this trip. The furthest point south before we start heading back to the UK. We decided to use a campsite while we were in Valencia. We looked at the reviews of a camperstop and a couple of campsites and eventually settled on Devesa Gardens. We wanted to be in the Albufera Natural Park, the area of wetlands and rice fields south of Valencia, and the campsite (in the ACSI book and 19 euros a night) had good reviews. I desperately wanted somewhere with showers so that I could dye my grey striped hair before heading into civilisation.

The campsite pitches were fairly typical for Spain, no grass in sight, hard packed earth pitches big enough for the van and table and chairs and with a framework of poles which can be used to provide shelter from the summer sun, not needed at this time of year when any direct sunlight is very welcome. The staff were very friendly and had excellent English, providing bus timetables and maps and all sorts of information. Paul must have been sat in the van for half an hour waiting for me to finish checking in. When we finally got onto our pitch we were straight into the showers to check them out. They lived up to the reviews, spotlessly clean with blasting hot water. Not a push button in sight. The oddest thing was getting pink wristbands which we had to wear to get into the ‘park’ area of the campsite. It felt a bit over the top given that the campsite is in the middle of nowhere but I suppose that in summer they could get people trying to take advantage of their facilities. We fastened them loosely enough that they could be slipped off. We had to be a bit careful with them as they needed to be returned at the end of the visit, along with the electronic key for the entrance barrier, to get our deposit back.

Although the campsite didn’t have the most amazing views it did back onto a lake,.In fact we wished we’d taken a pitch at the back so that we could get views of the birds, bats and incredible sunsets directly from Bertie. But it didn’t hurt us to stretch our legs in the evenings. 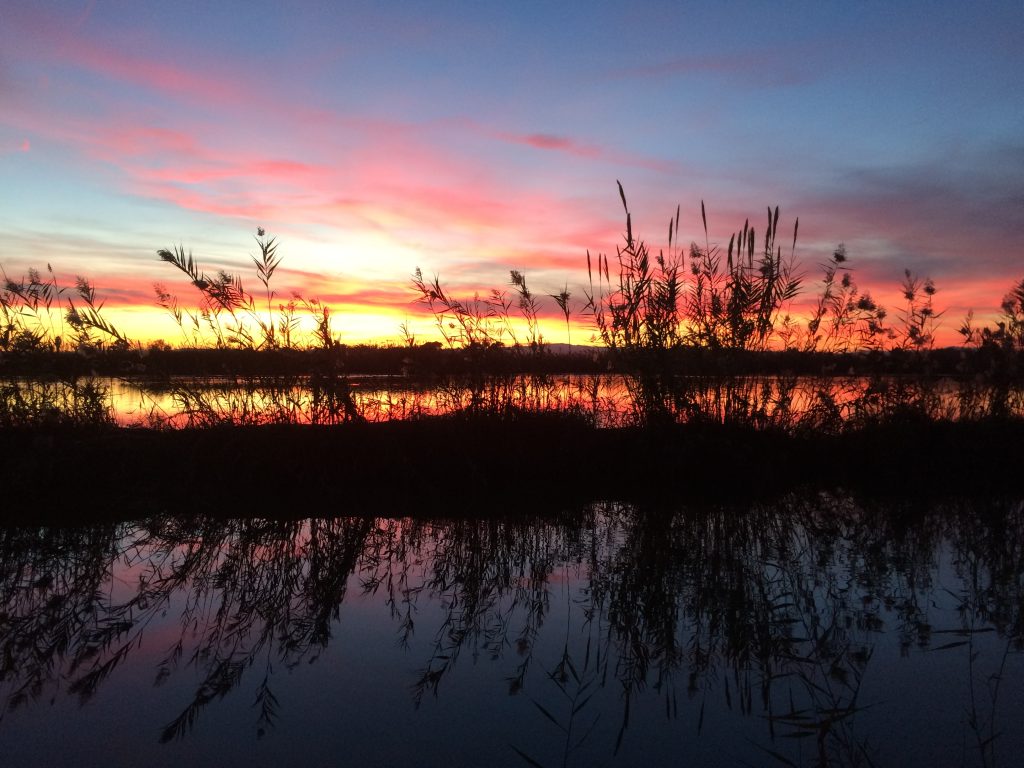 Sunset across the Albufera

We spent two days looking around the area. Exploring the city of Valencia on one day and exploring the Albufera towns on the other. I wasn’t at my best after a couple of sleepless nights but even so we managed a mooch around the old part of Valencia, slightly unnerved by the beggars at the cathedral – it’s been a long time since we’ve been in a big city and the signs of real poverty and blatant opportunistism side by side with the tourist infrastructure was a shock to the system. 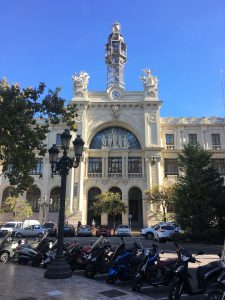 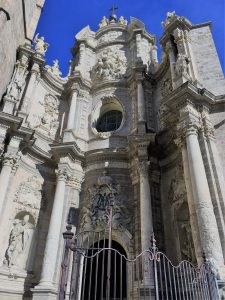 By far our favourite part of the city centre was the food market. We always try to get to the food markets of big cities (and smaller towns) when we visit.  As well as showcasing local and regional products they are a great source of more exotic ingredients that you might not find in supermarkets. Sure enough there was an Asian stall in the market that also sold cheerios and lucky charms and other such alien goods.

With a bag of local bomba rice, it’s grains as round and shiny as little pearls, we left the food market and moved onto the Mercado Colon. This modernist building is a venue for cafes and restaurants. I chickened out of trying the Horchata (a thick chalky looking drink made from Tiger Nuts – a tuber rather than a true nut) although it doesn’t contain milk it still looked too much like milkshake for me to stomach. 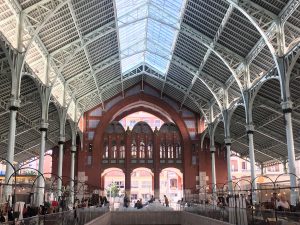 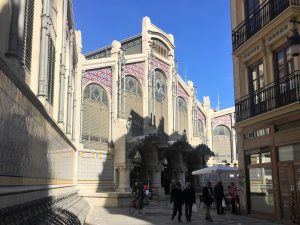 A further wander took us to the dry river bed that provides the venue for Valencia’s parks. The river was diverted after a devastating flood in 1957 and although there were a number of options for using the land, the residents of the city campaigned for it to be a green space. If you follow the river bed you will find various types of park from formal gardens to playground spaces. And of course there is the City of Arts and Sciences with it’s futuristic buildings and reflective water. We watched as they were setting up the course for that weekend’s marathon around the base of the buildings, and then turned our attention upwards where workers must have had fantastic views from the tops of these amazing buildings 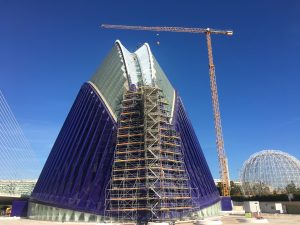 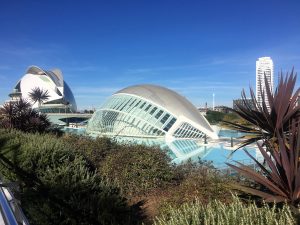 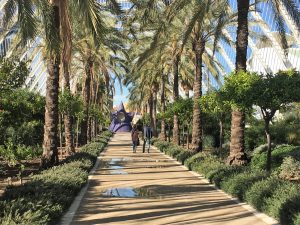 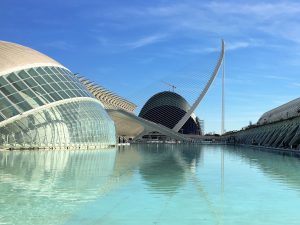 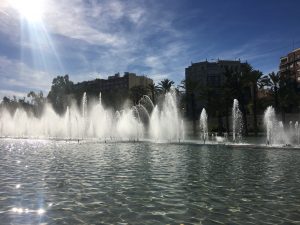 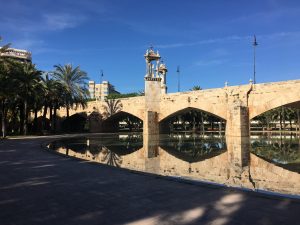 As we approached the City of Arts and Sciences we started to feel peckish. We were too hungry to wait for a bus to take us down to the beach and harbour area for lunch, and anyhow we hadn’t finished looking around. A quick look on google and I found a restaurant short distance away that had reasonable reviews and served Paella. We headed towards ‘Alqueria del Pou’, crossing some rather desolate looking land. Paul was starting to fret as the only sign of life was a young man in his twenties hanging out by his car with his top off (i’m not sure exactly why he found that unnerving). Contrary to his concerns the restaurant did exist and was open, we were just a bit early for lunch – it wasn’t quite two o’clock. The waitress told us she only had two tables available, although there were only a couple occupied when we arrived. By the time we left the place was heaving and the car park was full. We were happy with our outside table, the weather had warmed up nicely and it felt like a British summers day. 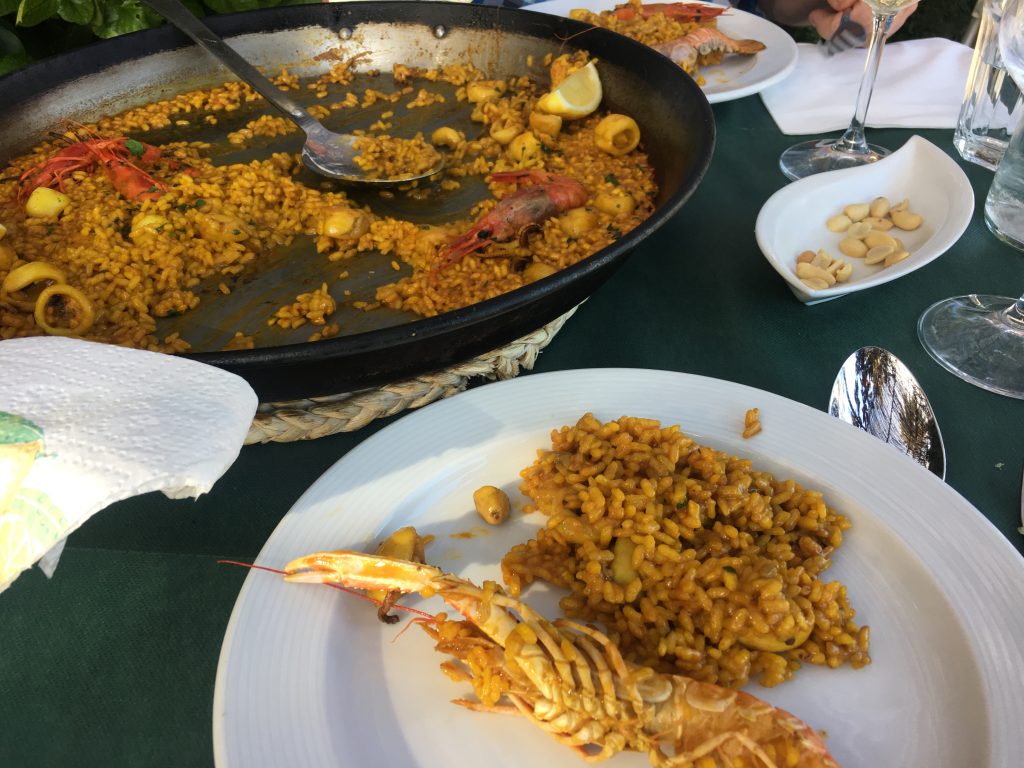 We had Paella of course – it was difficult to choose which one (you have to order a for a minimum of two people) in the end we opted for the less traditional seafood version.

After finishing our sightseeing in Valencia we got the bus back to the campsite. The fare was a nice simple €1.50 per trip, paid on the bus, but the journey was about 50 minutes.

Our next day was spent wandering towards El Saler, taking in the long beach, the lagoons behind the shore, rice fields and of course THE Albufera – the largest lake in Spain. It was strangely quiet except for El Saler itself, the miles of cycle path and footpath empty of anyone but us. 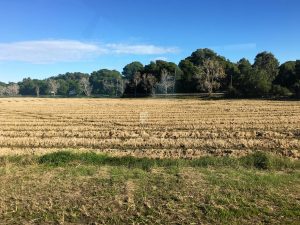 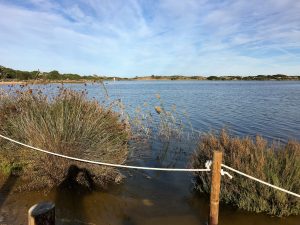 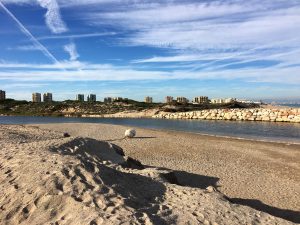 When we left Valencia we tried to avoid recreating our drive to the campsite, which had taken us through the city and around some interesting roundabouts, really large but with no clearly defined lanes, just a free for all. We kept closer to the harbour which was a much easier journey and allowed us to see some different parts of the city. I would strongly recommend a visit here, it would make a great weekend break.