We weren’t really sure what to expect from the Spanish Pyrenees. The French side of the mountains seems much more talked about in the motorhoming world, but people are generally quiet about the southern side. So we left our campsite on the coast and made our way back towards the snow dusted mountains with very little in the way of expectation. We knew there were mountains, we knew there were walks and we knew there was motorhome parking. But we didn’t have the enthusiastic input of fellow travellers to bring the area to life.

Our route took us over the Col d’Ares on the border between France and Spain. At first the road followed the valley taking us past farms and vineyards, then it rose gradually up to the pass. The snow that had fallen while we’d been hiding in the campsite made the landscape of the pass almost monochrome. Grey skies, dark trees and white fields stirred a strange excitement in us as we contemplated walking in the snowy mountains.

Our first overnight stop was in the town of Camprodon, liberally decorated with the yellow ribbons supporting Catalan independence. The motorhome parking here was in an oddly circular parking area where the signs, according to google translate, proclaimed that we should park like barrels. The weather had turned a bit grim and grey in the afternoon but we still enjoyed a walk around the town, taking in the ‘Pont Nou’, a gothic arched bridge that delighted me with it’s steep cobbled span over the rushing river Ter. 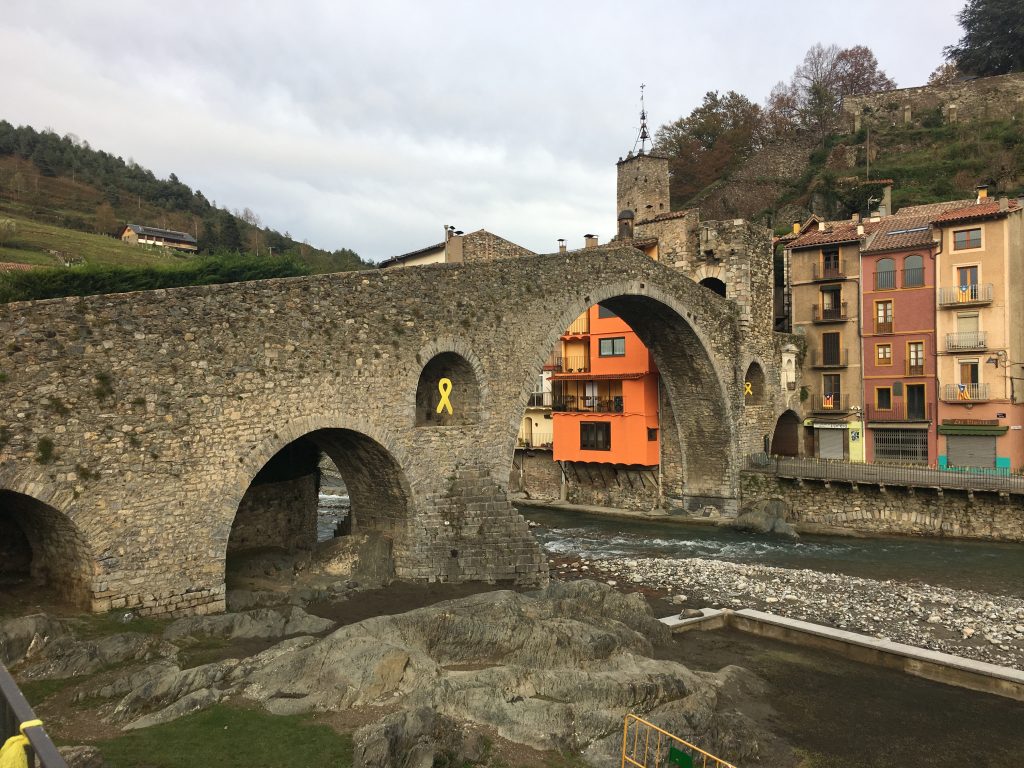 The Pont Nou, originally built in the 12th century 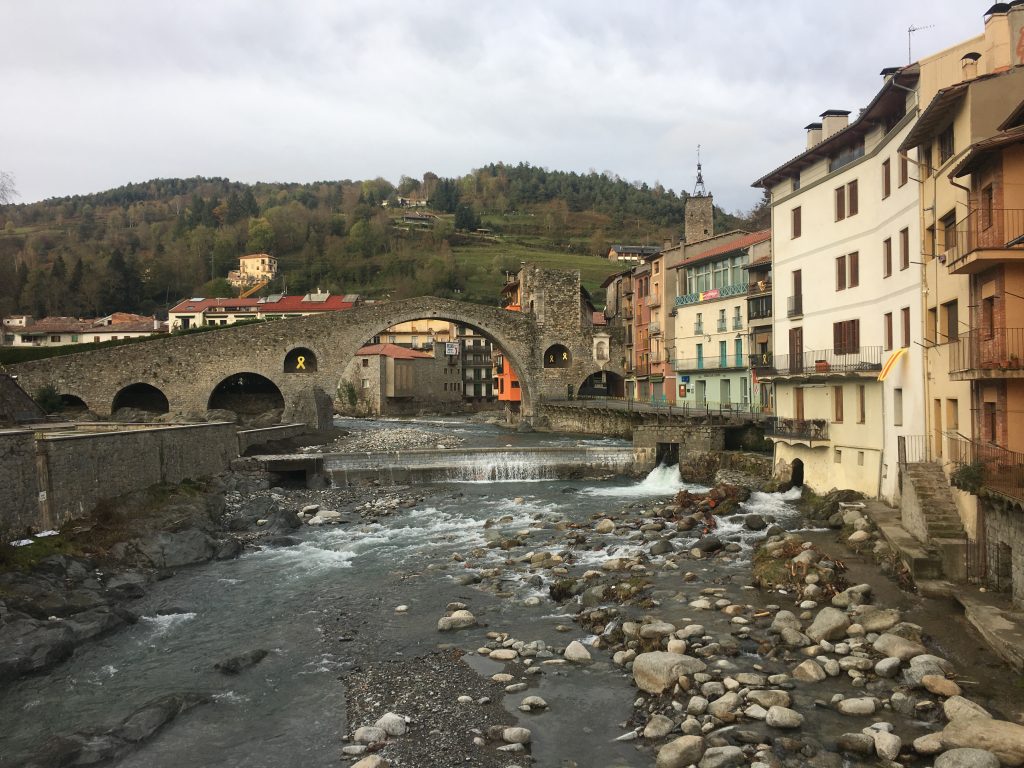 The town runs alongside the river Ter 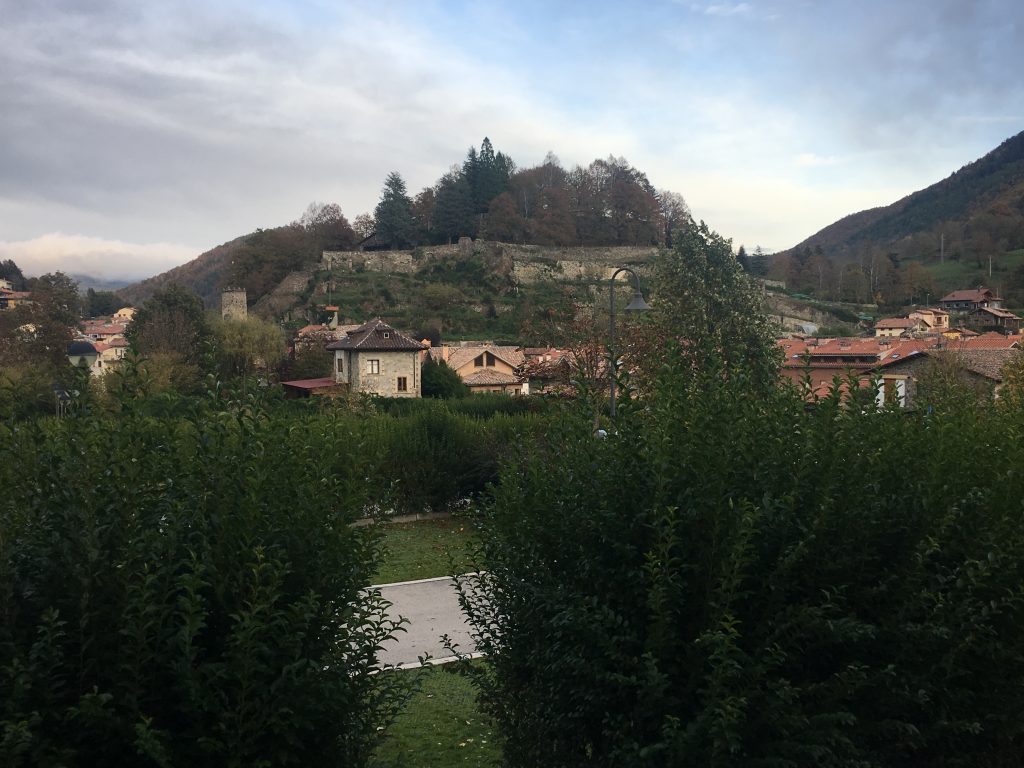 Looking across the town from our parking area

The following day the weather was improving and we decided to head up the Camprodon valley as far as possible, we drove past the various villages of the valley with their attractive stone built buildings, some ancient and some modern but all conforming to an attractive standard.

At the head of the valley is the Vallter 2000 ski area, but we were still a few hundred meters short of it’s altitude when the road became impassable (to us anyway) with a layer of icy snow. 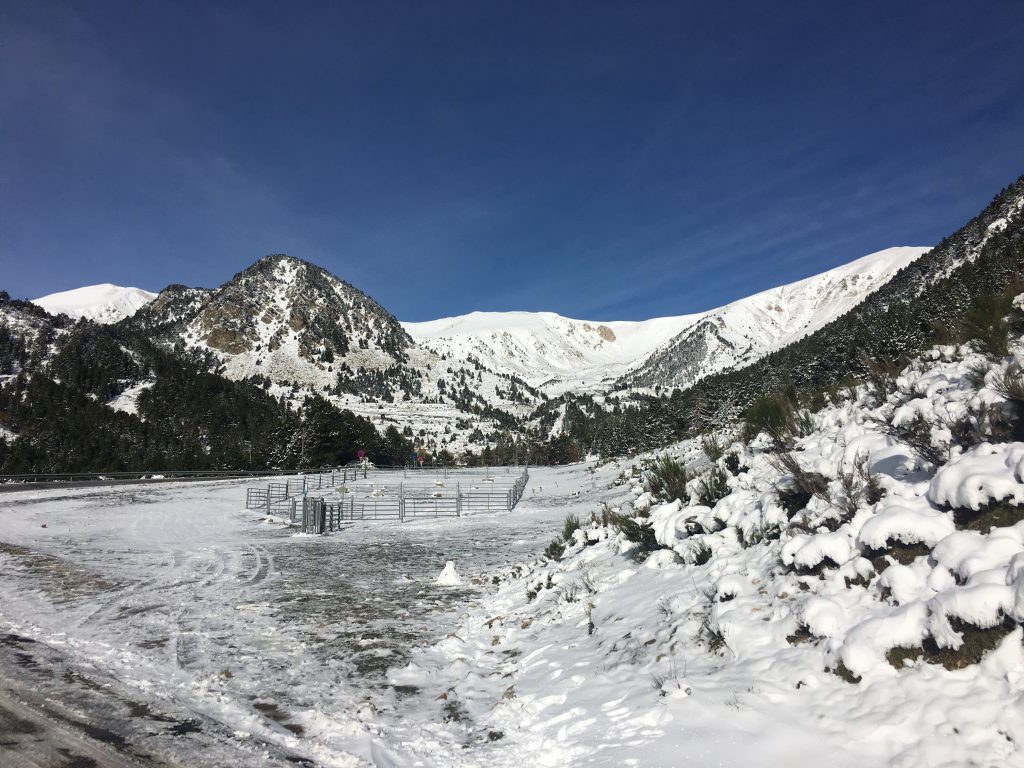 Turning spot on the road to Vallter 2000

We turned around slowly and carefully before heading back down the road a short way to a corner where we had spotted an information board and signposts for walking trails. There was enough room for us to park up off the road and point Bertie’s solar panels roughly south. We weren’t going to stay the night but we wanted our batteries to be as charged as possible.

A quick look on the map and wikiloc found that a couple of paths, including the GR11, set off from here and could be joined in a circular walk. Our chances of completing the circular route were pretty small given the amount of snow lying on the ground but we decided to follow it as far as we could manage.

So we set off, initially up the GR11 until we turned left towards the river. We hadn’t realised that we would need to ford the river, expecting either a bridge or a stepping stone crossing, so we were a bit nonplussed when we found a raging torrent that seemed to offer no safe passage. We wandered up and down a few times, looking for the most obvious way across. Eventually we decided on a crossing slightly downstream of what must be the usual point, the river split into a couple of shallower streams which reduced it’s flow and made us much more comfortable with the crossing. 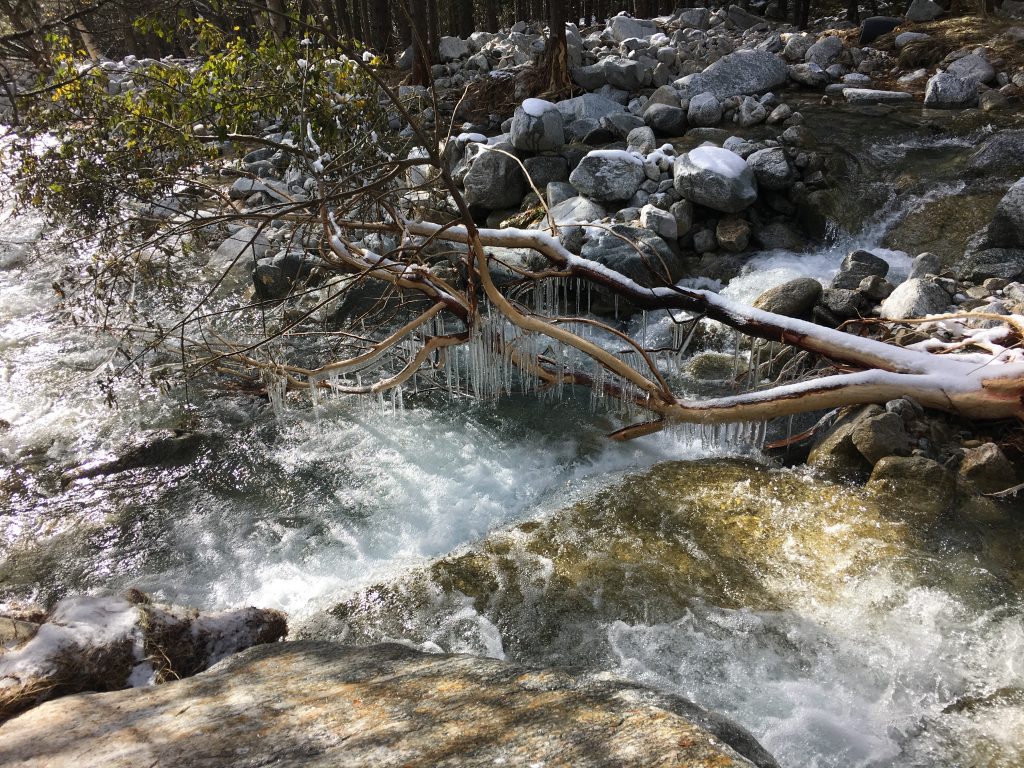 Beautiful icicles adorning the trees over the river 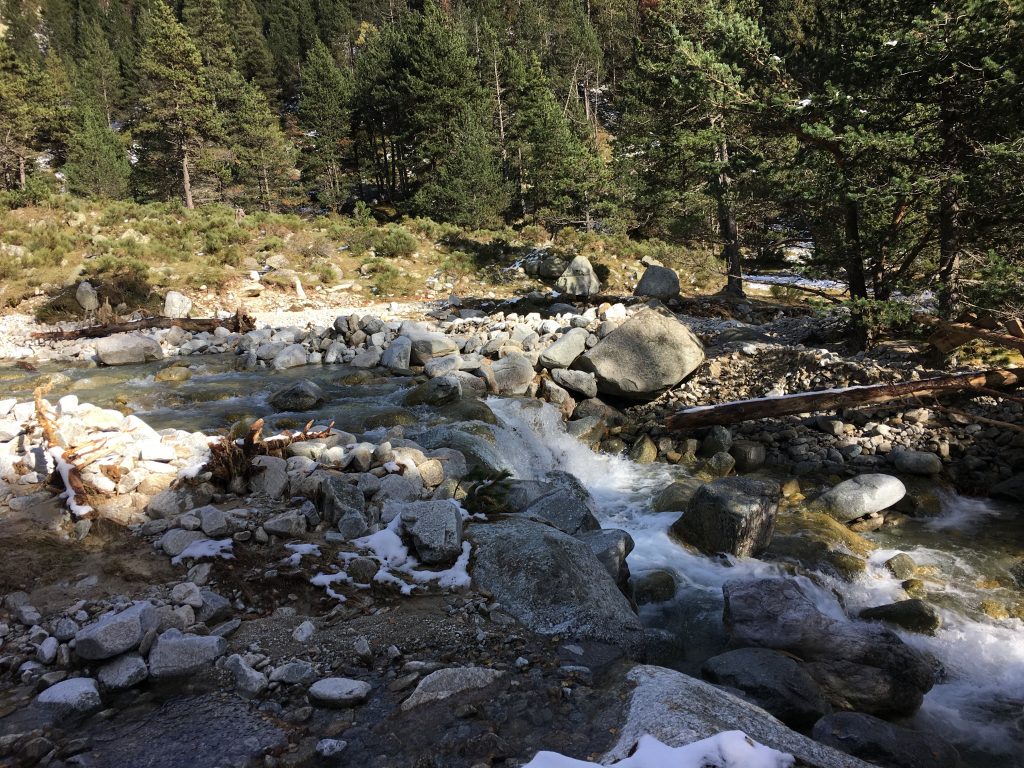 River crossing point, we were glad we had walking poles to aid our balance

After this we followed a path that roughly ran along the bank of the river through trees laden with snow. It wasn’t easy to stay on track, with plenty of snow on the ground covering the obvious signs of the path. Luckily we could use the GPS on our phones along with the wikiloc route to ensure we were heading in the right direction.

After about 3km the route left the woodland and brought us out on the open mountain where the valley opened out. We sat here and drank our flasks of hot drinks, very welcome in the cool weather. As our eyes roved around the views of the valley we realised that there was a herd of animals on the grass above us. These were Pyrenean Chamois, known as Isards, small deer (well ok, actually they are ‘goat antelopes’) with short backwards curving horns. As we continued our ascent we watched them browsing on the grass, occasionally starting and dashing off for reasons we couldn’t make out. 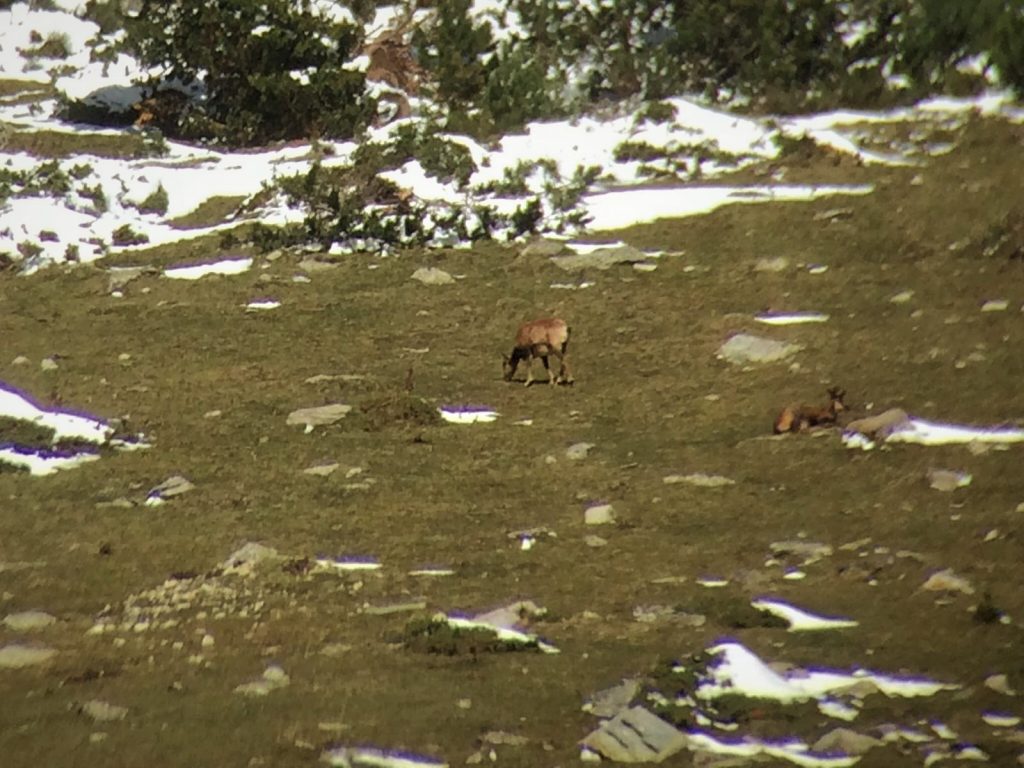 Isards – not the best picture!

It didn’t take long before we had to turn around. The increasingly strong wind had blown the snow into deep drifts that blocked our way. After slogging through one of these drifts, up to our knees, we decided that it wouldn’t be sensible to continue and so we turned and retraced our steps. The return route was much quicker being downhill but also because we didn’t have any route finding difficulties. When we reached the river it proved embarrassingly easy to ford in this direction. 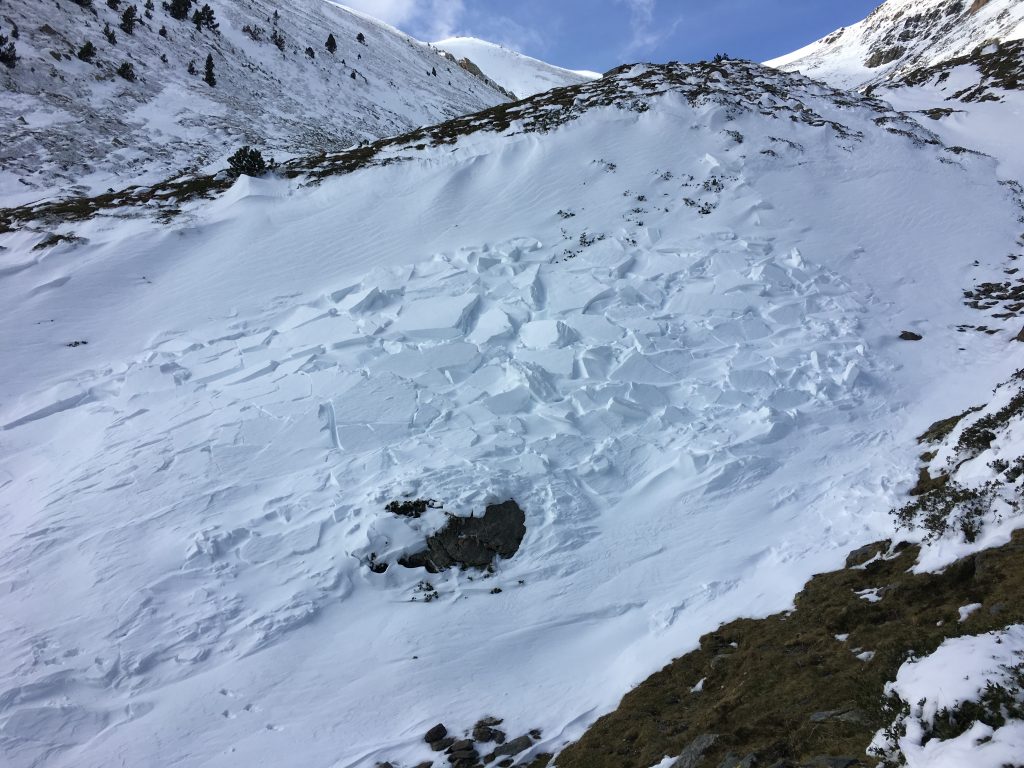 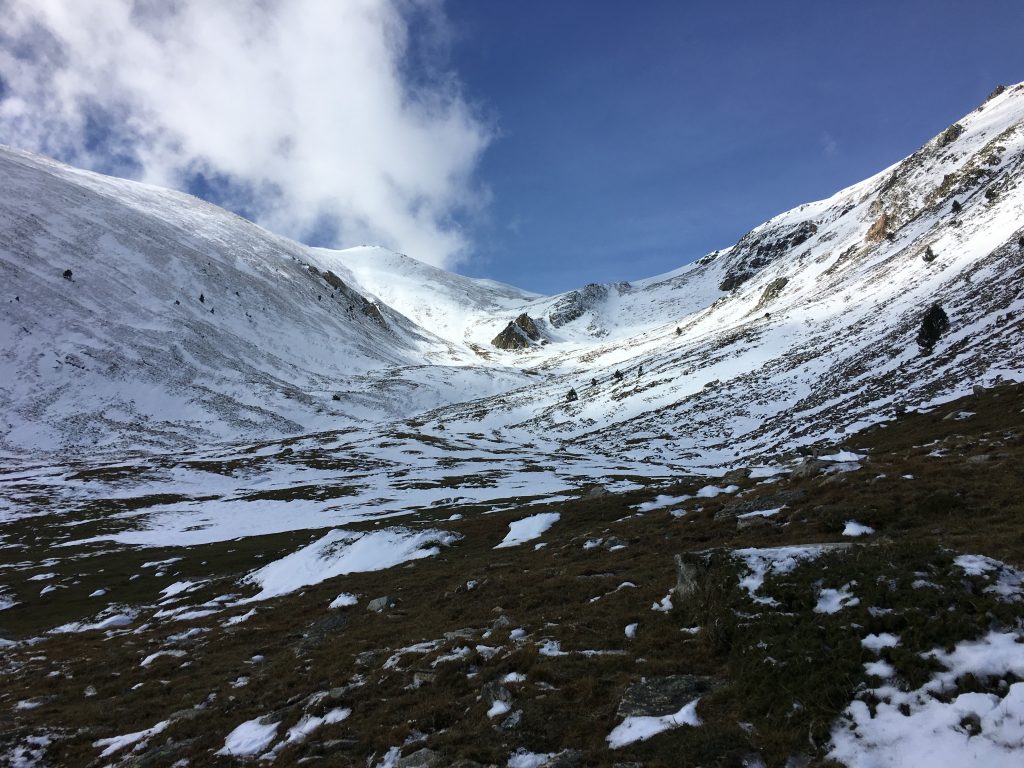 That afternoon we moved to a parking spot in Sant Joan de les Abadesses, it took a couple of manoeuvres to make the sharp turn into the car park, but it was worth it for it’s tidy motorhome services and spotlessly clean public toilet. We still had plenty of time left to explore the tiny medieval town which had yet another gothic bridge as well as the remains of medieval walls and the monastery that had given the town it’s name. 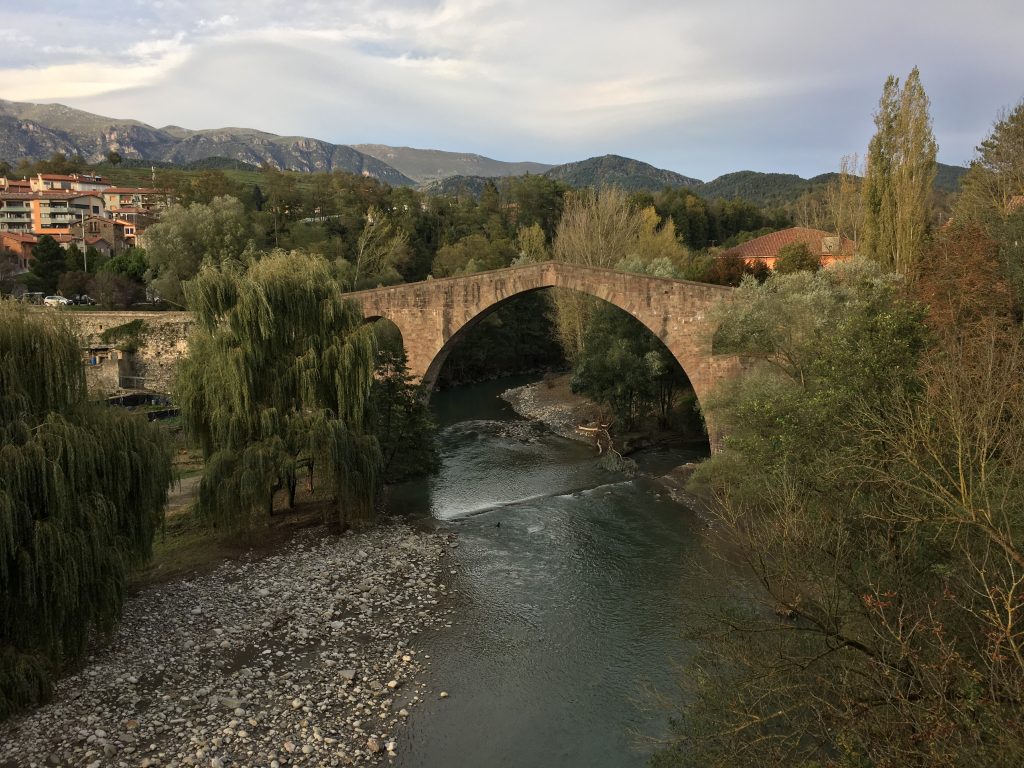 The gothic arches of the bridge – this one much more heavily restored. 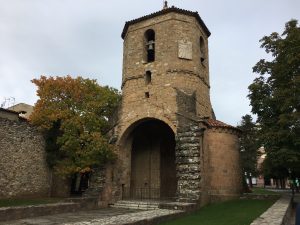 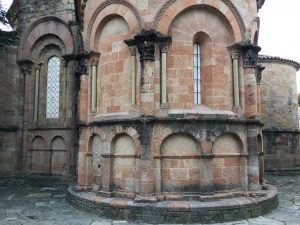 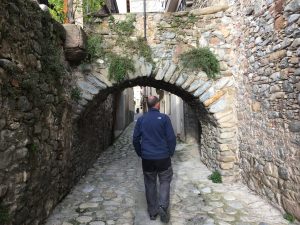 Archway from the old city walls 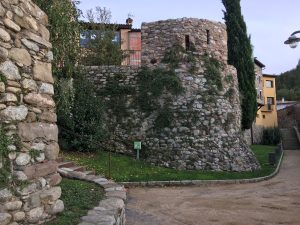 Part of the medieval city wall and tower 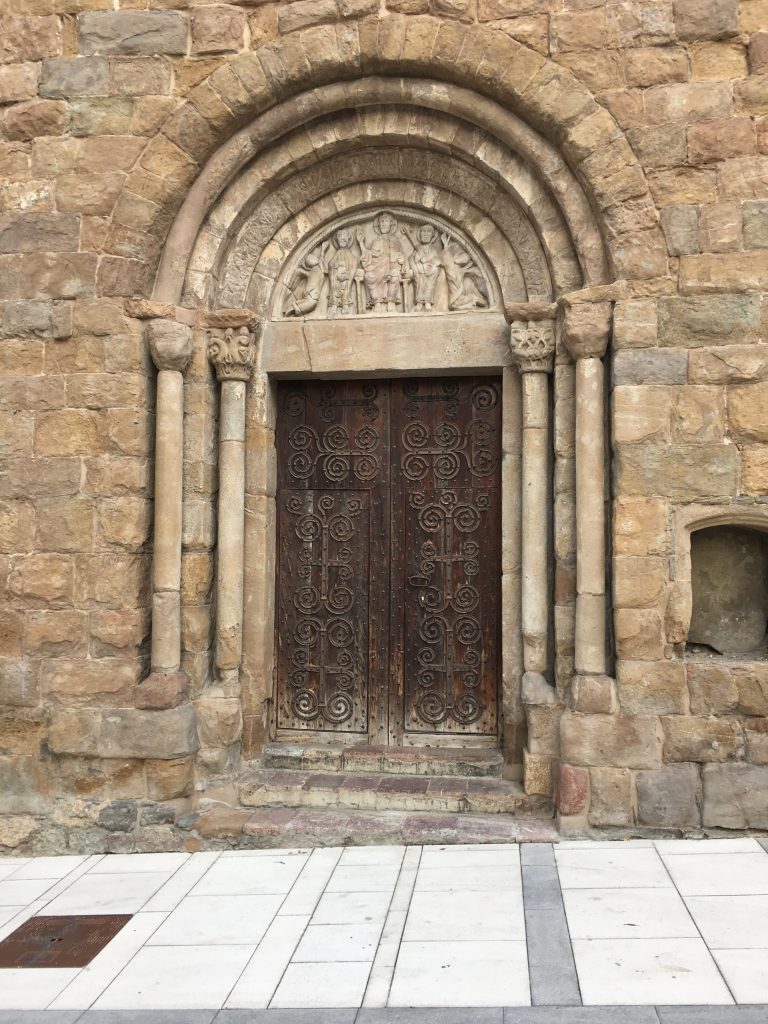 Doorway from the church of St Pol

2 thoughts on “Heading Into Spain: Gothic Bridges and Pyrenean Chamois”