I would never have thought about visiting Falkirk if it wasn’t for Facebook.

I will admit I have a bit of a Facebook addiction, accessing it far more than is healthy and habitually swiping and refreshing every time I pick up my phone. In an attempt to channel that addiction in a useful direction I have joined a number of forums, including several devoted to motorhoming. The Scottish Motorhome Wildcampers forum has been a great help on our travels round Scotland and I kept seeing pictures of the Kelpies coming up on the feed. As I’m a sucker for anything that is illuminated I immediately wanted to go and visit them, and as luck would have it that fitted in nicely with our plans to finish our tour of Scotland down it’s south eastern side. Also in it’s favour, there are two car parks and both will allow motorhomes to stay overnight. 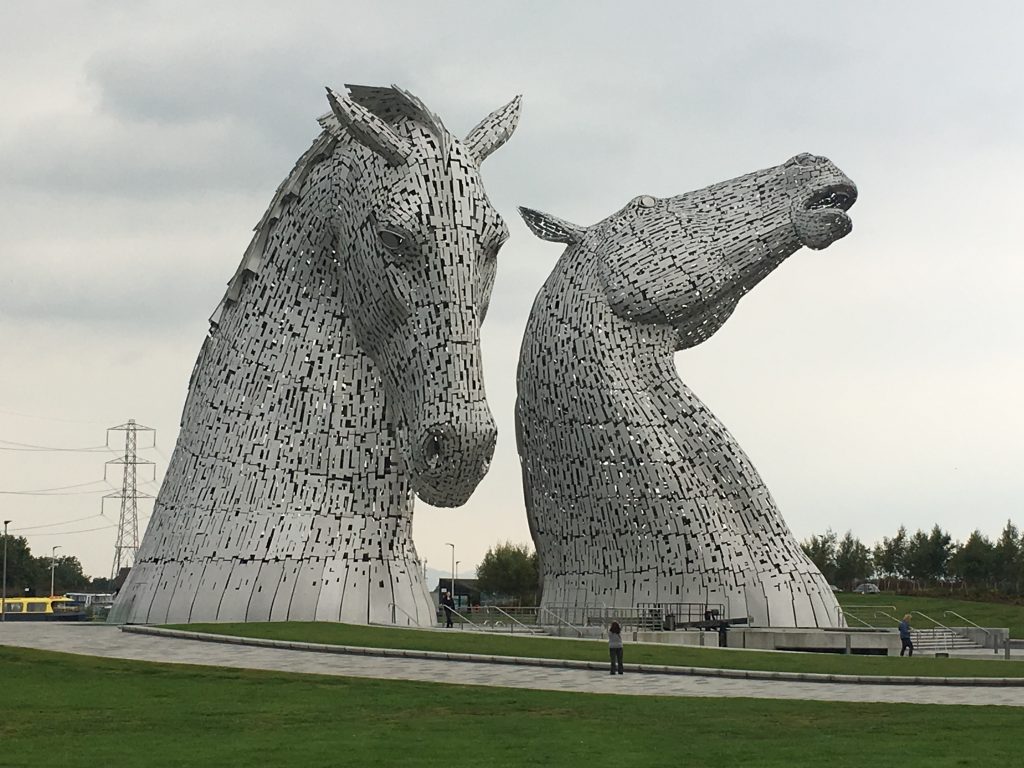 The Kelpies are two huge steel sculptures of horses heads which were installed as part of the Helix project, a regeneration project based around the Forth and Clyde canal. We turned up in the afternoon and popped down to visit them which it was still daylight, and then we went down after sunset to view them in all of their illuminated glory. Through their Wikipedia entry I found an article from the Guardian’s art critic that scathingly referred to the Kelpie’s as misbegotten, bland and stale; obviously not a fan of popular municipal art then! I thought they were fantastic, maybe not thought provoking or ground breaking but definitely awe inspiring and such a great success story for the local tourism economy.

The Kelpies slowly change colour during the evening

And Falkirk is about more than just the Kelpies. The following day we took a bike ride along the canal to the Falkirk Wheel, this was built as part of the millemium project to re-connect the Forth and Clyde Canal with the Union Canal. Back in the days when the canals were being used in anger the 35 meter height difference was managed through a series of locks that took the best part of a day to navigate. These locks were dismantled and the two canals have been separate since the 1930s. The project to re-link the canals was looking for an imaginative way to allow traffic to pass through and so the Falkirk Wheel was born – a huge rotating lift that will transport boats up or down between the canals. We sat and watched in fascination as the tourist boat and some other canal boats used the lift. 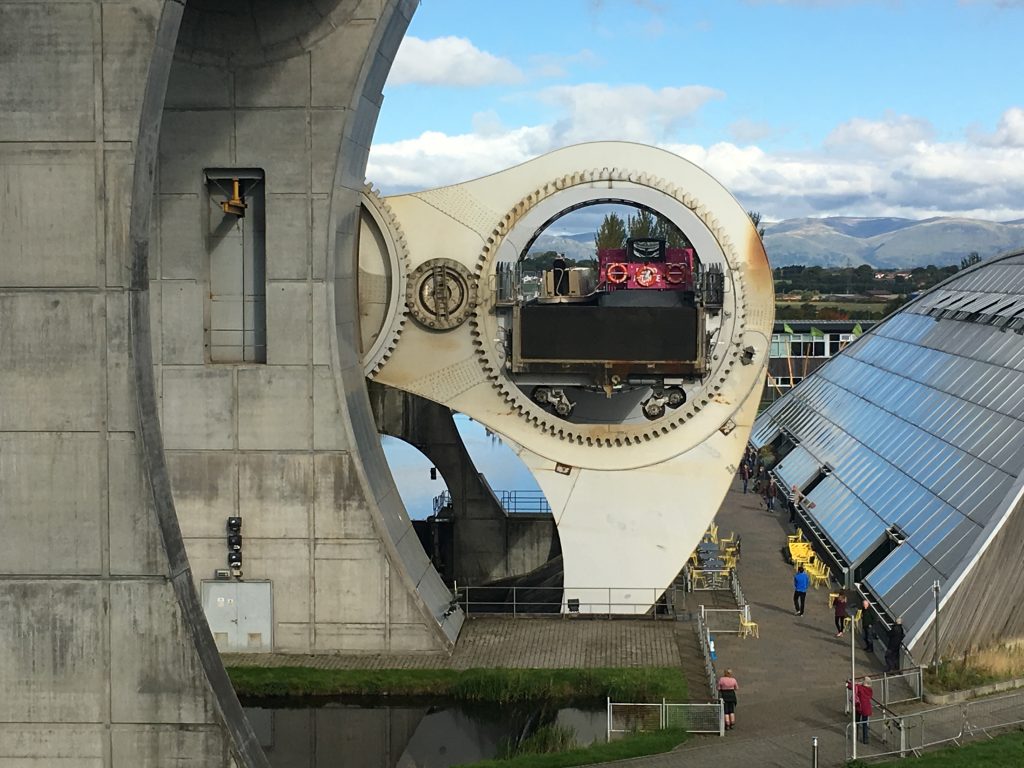 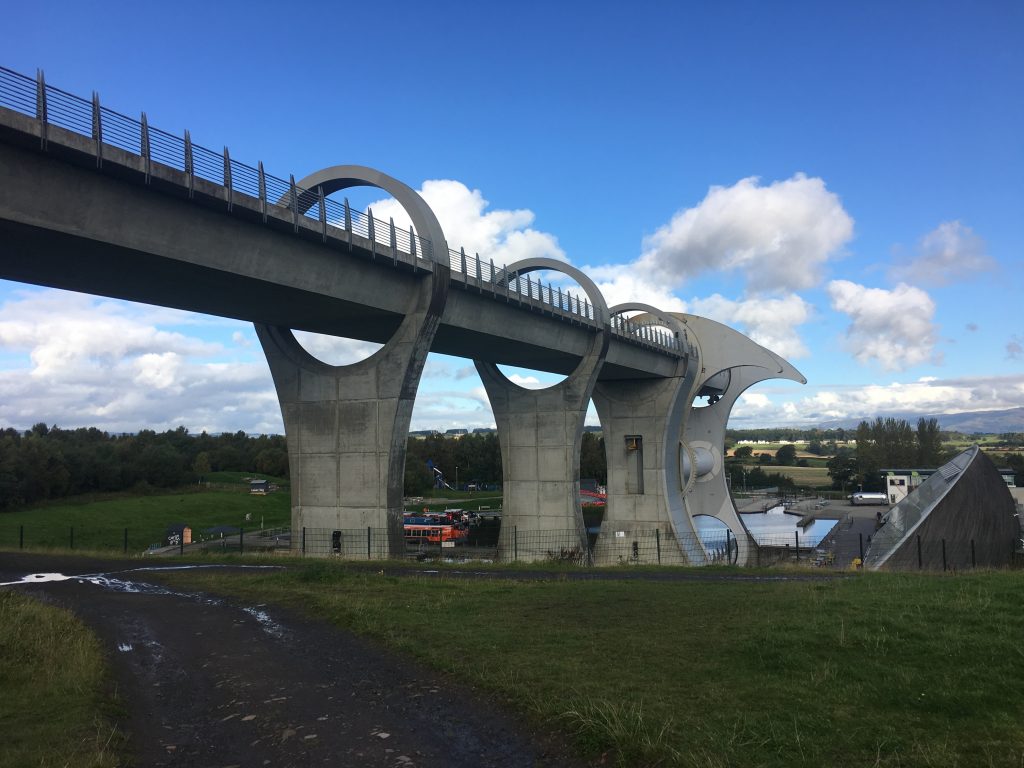 The Union Canal hovers over the Forth and Clyde canal basin 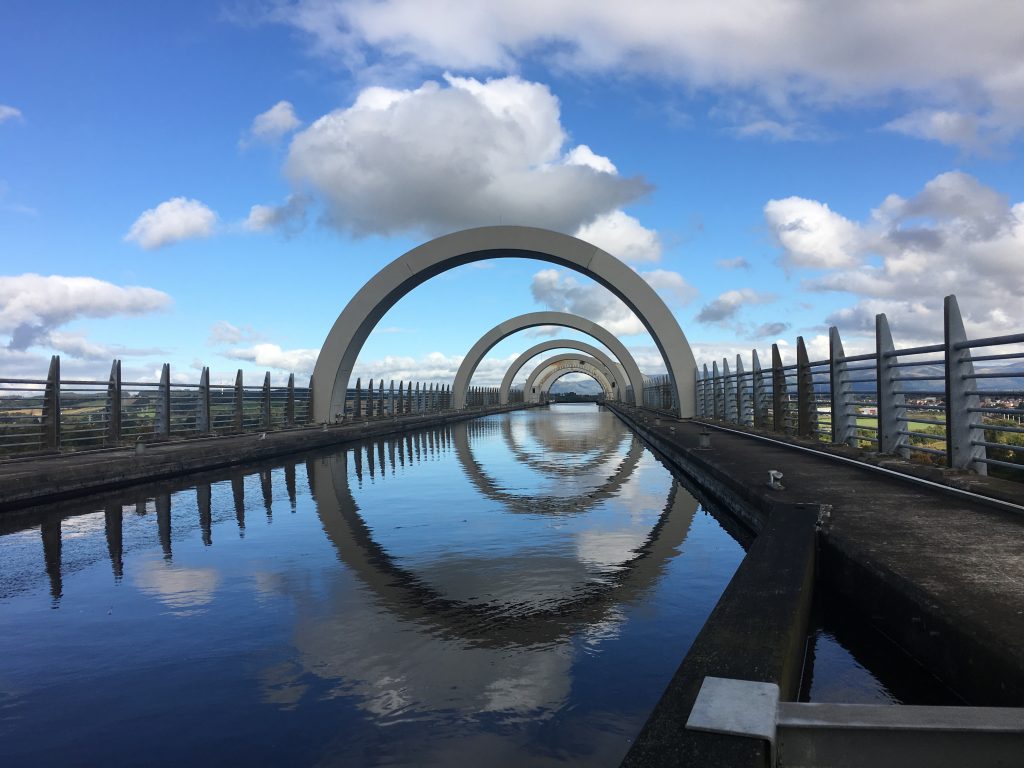 When we could finally tear ourselves away from the wheel we moved on into Callendar Park and the mountain biking centre at Craigburn Woods. This is one of three mountain biking areas in the park and had a short blue trail and a slightly longer red trail. Both were very easy for their grades, but highly enjoyable and we whizzed round them a couple of times getting muddy in the process.

Finally we made our way back along to the Union Canal and across town back to the carpark at the Kelpies. We were asked for directions to the Falkirk Wheel by a Canadian who was cycling in the opposite direction and was a bit concerned after seeing us that it might be muddy en-route.

It had been a fantastic day and we felt there was plenty more to keep us occupied if we had the time to stay for longer. But we couldn’t stay, so off we went to our next stop, by-passing Edinburgh on our way to North Berwick where we parked up at the end of the beach alongside a few other motorhomes and campervans.