November 1st is a national holiday in Spain. Dia de Todos Los Santos – All Saints Day to us – is traditionally a day when families get together to remember their dearly departed. This morning it seemed like a new tradition had taken hold, a day to dress in top to toe lycra and indulge in some serious cycling. Not us, I hope you understand (I haven’t been able to entice Paul into lycra yet – as soon as I do I will share a photo), but the roads as we travelled from San Sebastien to Lekeitio were strung with individuals and packs of cyclists. These were not roads for the casual cyclist, these were hilly coastal roads that swooped down and climbed up and occasionally entered long tunnels. There were some calories being burned this morning, maybe in preparation for a serious family meal later.

It was hard to believe it was now November with the hot sunshine blazing down. Our journey had been early in the morning and had taken us along steep sided roads where we’d been able to avoid the direct sun, but by the time we got to Lekeitio we were getting that trapped-in-a-greenhouse feeling. The aire here was another busy and multi-national parking spot and police drove around regularly to check that people were obeying the parking rules. One large German motorhome (a modern, double axle version of Bertie) was parked across the grassy area at the top of the car park and the police stopped to take the owner to task. It got to the stage of writing out a parking ticket before the driver backed down and agreed to move (to the only parking space left – the unpopular spot next to the services). A group of Dutch and English spectators were commenting on the scene of the German being taken down a peg with great relish – using their jealousy of his big rig as an excuse to indulge in the dubious camaraderie of racism.

We cycled down to the center of the village where the church nestled into the lowest point, behind a busy square and opposite the harbor. The village was busy with families, most promenading in the square or along the harbor and some taking boat trips to lay flowers on the water. The acoustics of the town amplified the voices of the people and added to the busy atmosphere.

After a stroll around town, Paul and I found a spot on the beach and we both went for a swim in the cool and refreshing sea. Not many people joined us, a couple of hardy older men and a number of children were swimming but most people seemed to have their winter wardrobes on. 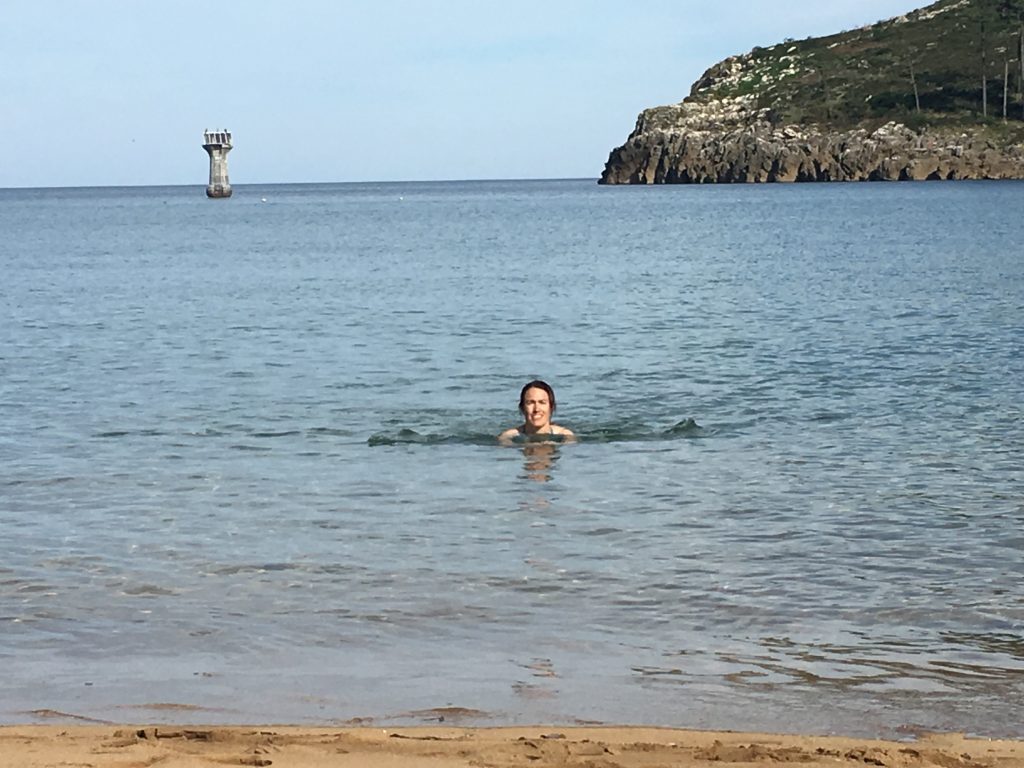 A lovely cooling dip at Lekeitio