Chagstock is a small and friendly festival near Chagford in Devon, on the north edge of Dartmoor. It’s currently in it’s eleventh year and we have been attending on and off since 2009. In fact it was Chagstock that finally persuaded Paul that camping was bearable, something I had been trying to persuade him of since we met in 2000. Without our camping experiences we would never have thought of buying a motorhome and so we could probably attribute our current adventure to Chagstock.

This year was our first year with small children in tow, we took Aaron when he was 9 but a 9 year old is fairly self sufficient. This time Stephen and Beverly bought their two year old, Emily, and my sister bought her two young children. It’s a different but still fab experience. There was plenty to keep them entertained, and they probably cared less about the weather than us adults. 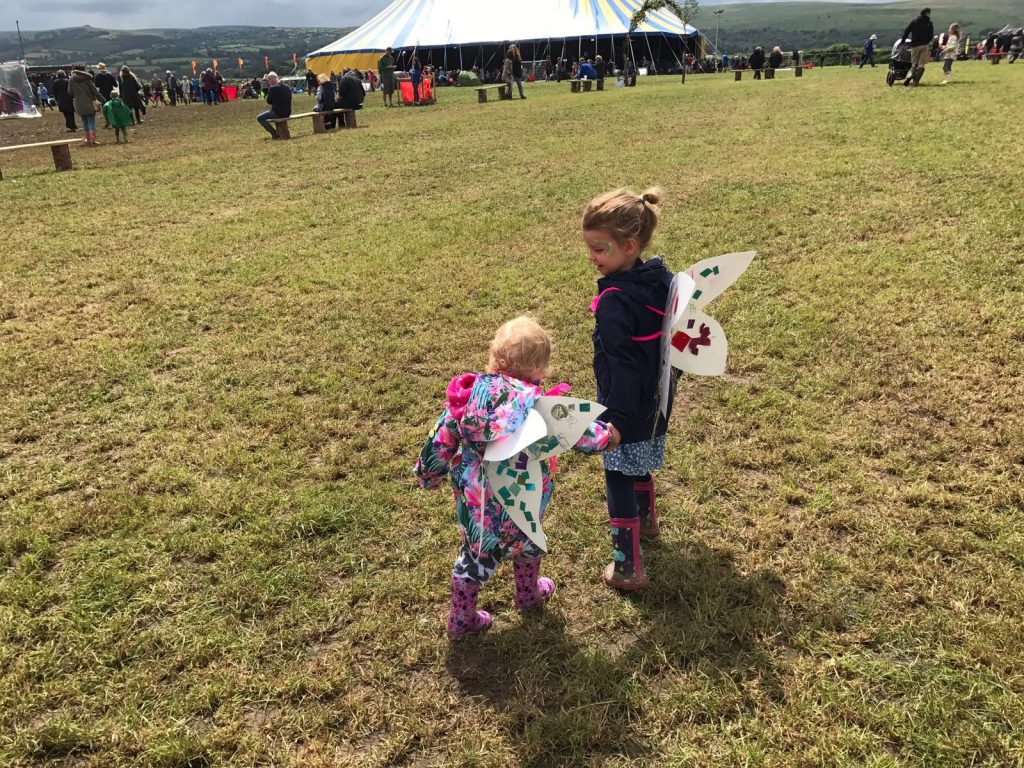 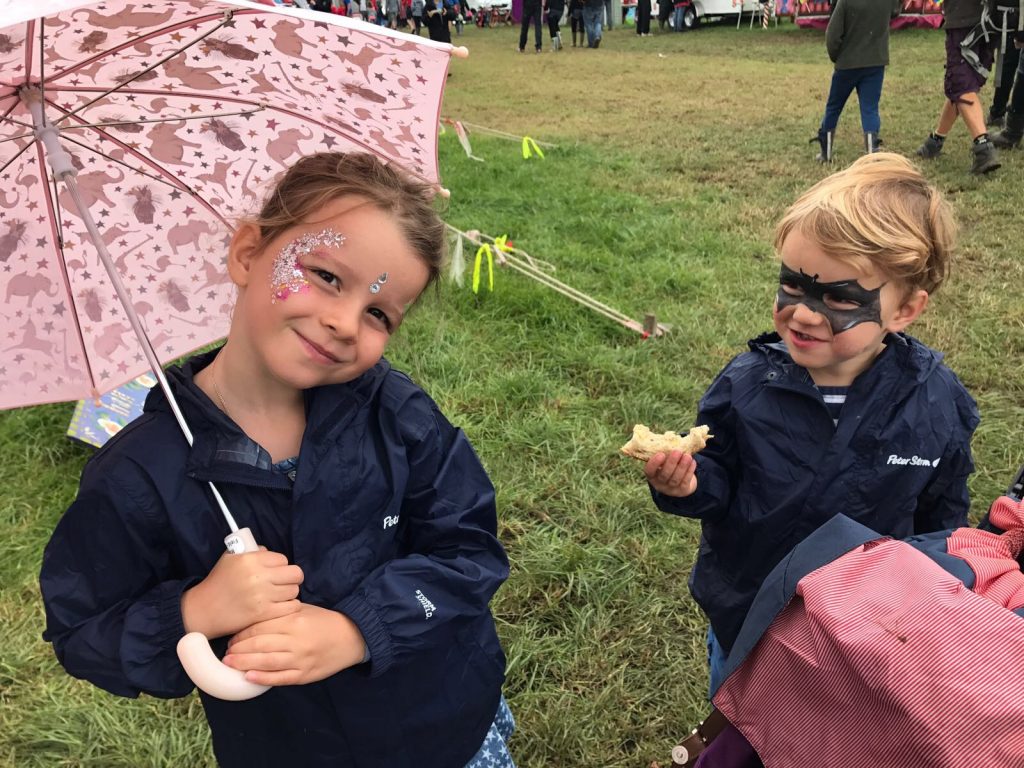 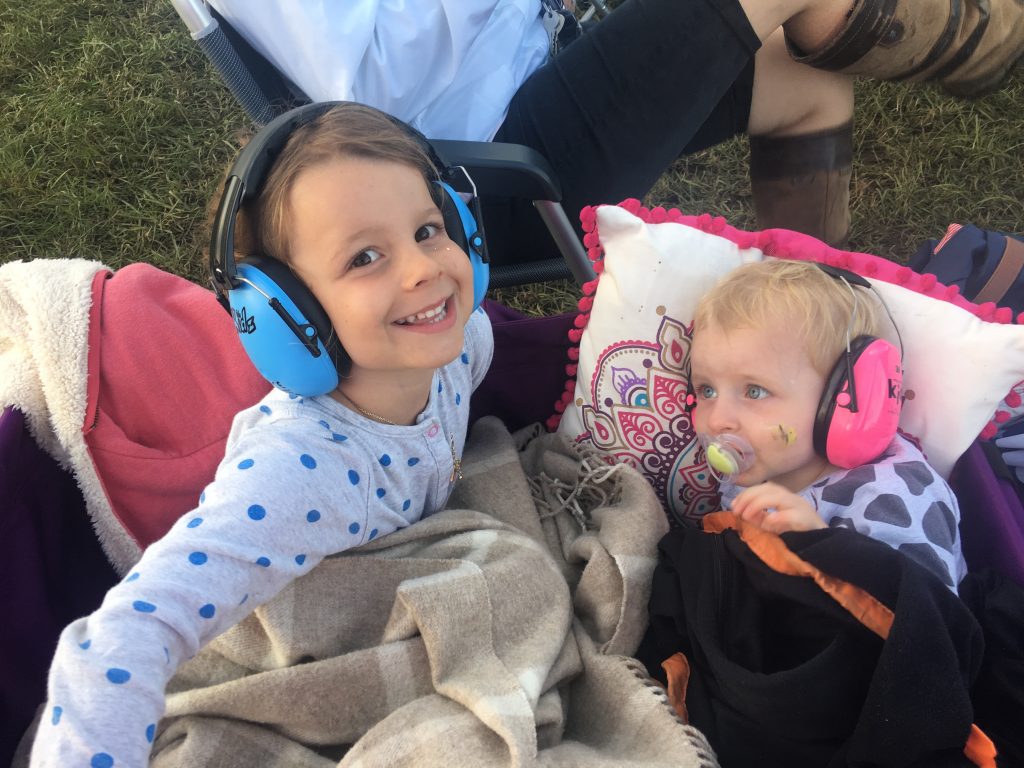 We turned up in torrential rain intending to camp with Steve and Bev (the campervan field is separate from the tent field and we wanted to be together) but after seeing Paul and Tam getting soaked to the skin erecting one tent I made an executive decision that we would leave the canvas in the garage. Friday afternoon was mostly spent in Bertie as all of us waited for the rain to ease and the bands to start. 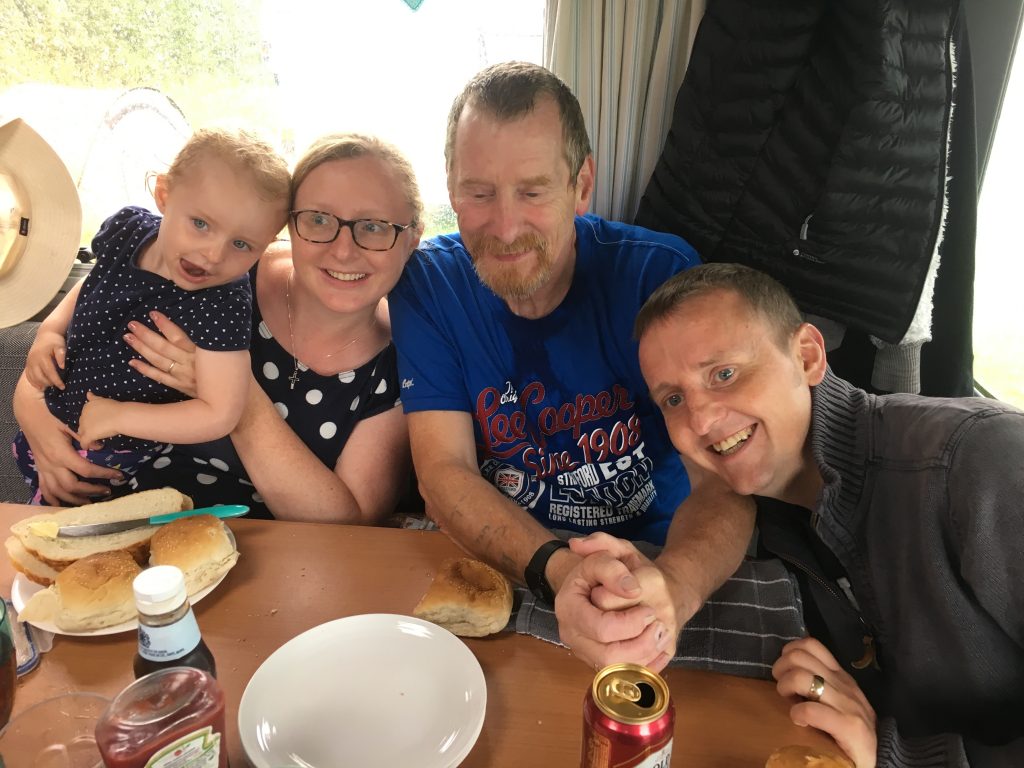 Waiting out the Friday afternoon rain in Bertie

Luckily the rain became showery rather than persistent and we managed to have a fantastic festival time. All children (and adults) cope with festivals in different ways. My niece and nephew needed their beds whereas Emily was quite happy to sleep in her trailer until later in the evening. Regardless, the idea was to relax and enjoy the weekend. 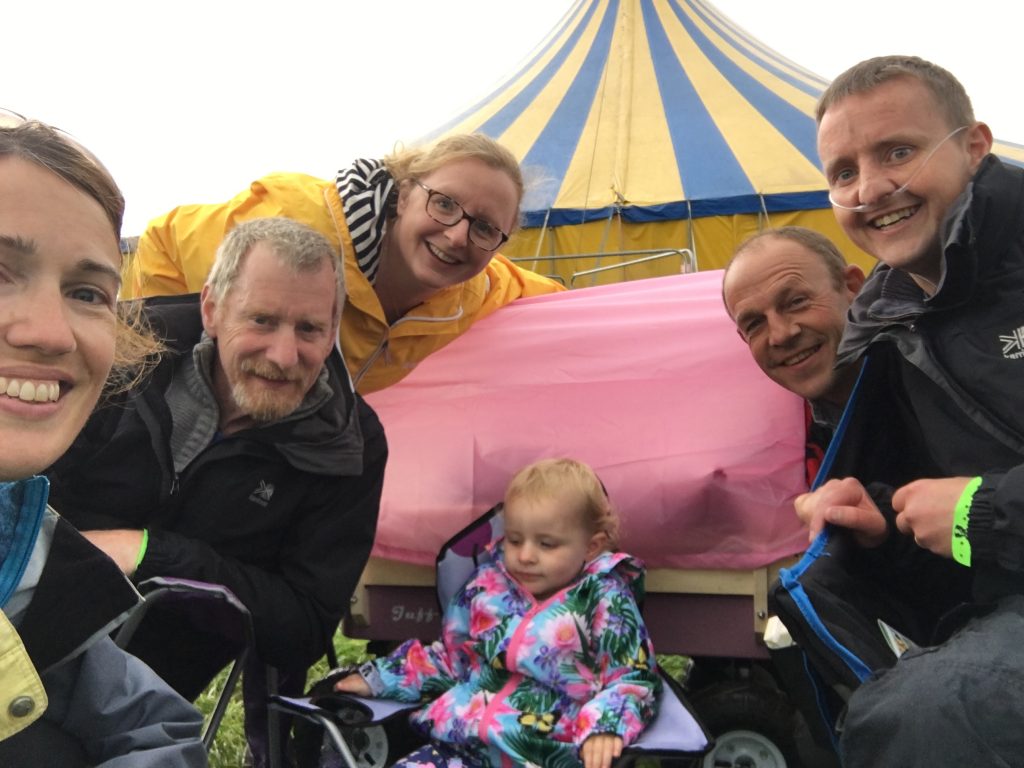 All prepared for Friday evening 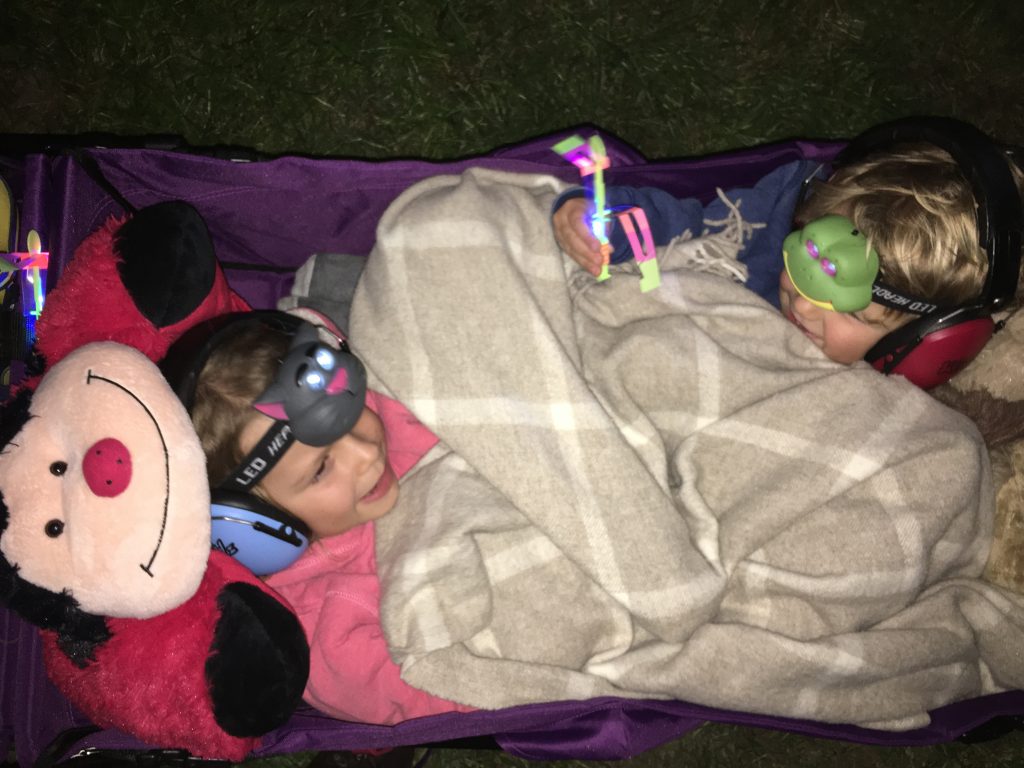 Niece and nephew snug in their festival trailer

On Saturday the headliners were The Shires who were excellent despite my previous opinion that they were a bit blandly ‘Radio 2’. As per usual though it was the bands we had never heard of that we enjoyed the most. For me the stand outs were the Raghu Dixit Project – infectiously enthusiastic music with Indian roots but many other influences, Skinny Lister – a folk band with plenty of energy, especially from the female vocalist (sadly no fiddle though), the Goat Roper Rodeo band – a country/blues band with a great double bass player and Buster Shuffle – a fun ska band with hints of Madness and a bit of interesting keyboard playing. 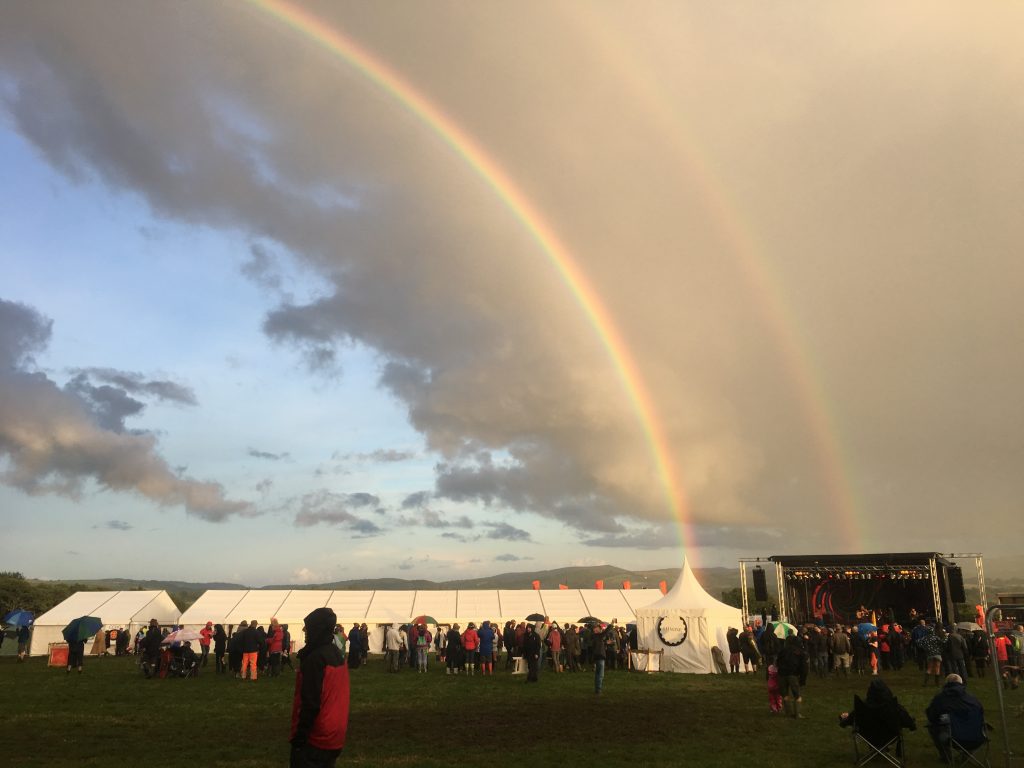 On Sunday morning we watched as campervans, caravans and motorhomes left the site. The mud at the site exit was deep and rutted. Most of the smaller vehicles managed, but caravans in particular were finding the exit angle tricky (one poor caravan managed to take out the gatepost on the way out, must have done some awful damage to the back corner of their van, but probably made it easier for the vehicles that came through later) and heaver vehicles were finding it difficult to maintain their momentum despite the encouragement of the festival marshals to ‘keep moving’.  Straw and sawdust were being piled onto the mud to try and improve things but it was not looking good.

My sister left the site with ease in her VW California which skipped light-footed over the ruts, and finally we decided that we would make a break for it. Bertie valiantly made for the exit and Paul kept his foot on the accelerator to maintain the revs but we got stuck just before the tarmac, a bit of a push from the marshals finally got us over the lip of the tarmac and onto a proper road – phew. Many thanks to the marshals and other support staff that helped to clear the field. It must have been a wet and muddy job!

The dates for next year have been announced and we will most definitely be back again.