For our final weekend in Northumberland we moved again, this time to a newly opened Temporary Holiday Site in Alnwick. This THS was quite different to the one at Beadnell, it was located at the Alnwick Rugby Club so was quite close to town and was much quieter than the one at Beadnell. I may have put my foot in it by mentioning that we’d come from Beadnell as the warden was quite uppity with us, she muttered that Beadnell THS crammed people far too close together, but we actually ended up closer to our neighbours here. Anyway, despite my faux pas, we liked it here. We had the use of the rugby club changing rooms for showers and toilets, the ladies were spotlessly clean but Paul said that the gents were a little more run down, probably an indication of the proportion of male to female rugby players. It was also possible to get electric hook up if needed.

We had a day out at Cragside, a National Trust property about 10 miles away. The bus to Cragside left from the main road near the rugby club, it doesn’t run very frequently but had services that allowed us to get there at 11 and leave at 4 which was plenty of time. The bus driver asked us what time we were planning to come back so he could look out for us, the staff on duty at the entrance to Cragside told us that the bus had occasionally missed people who were waiting at the stop and one kind gentleman said that if we missed the bus back he could give us a lift to Alnwick, but we didn’t have any issues in the end. The bus was incredibly quiet with only one other passenger on each journey. You can see why services get reduced. 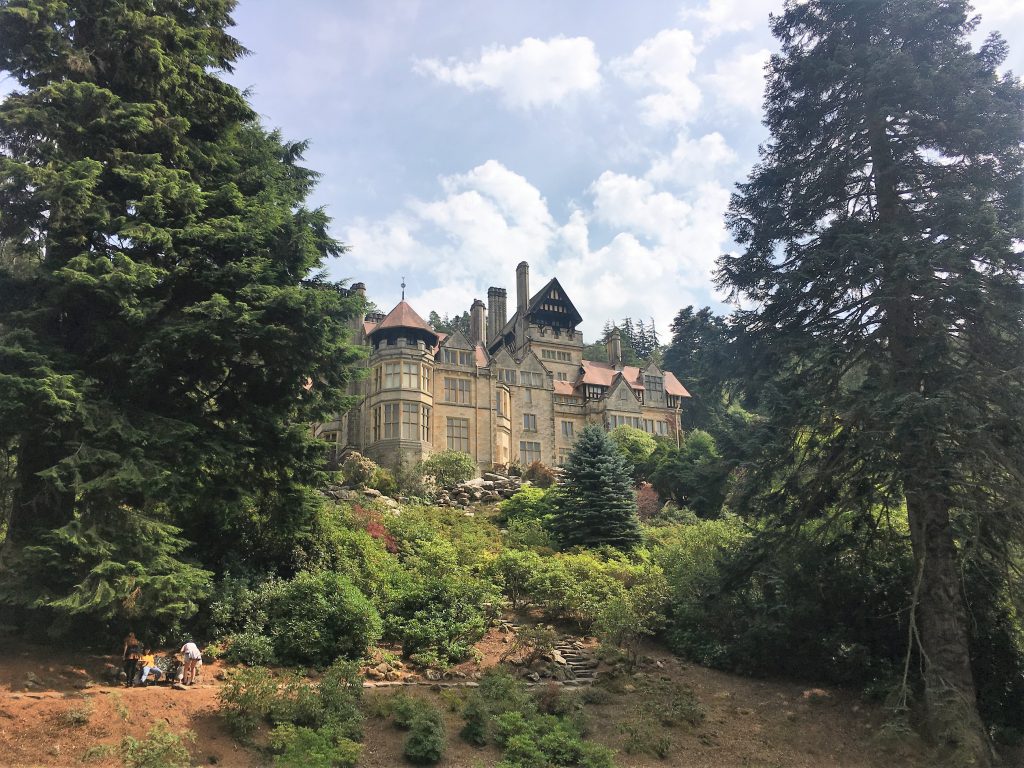 The Mock Tudor exterior of Cragside

Cragside was a great day out, a really interesting house and grounds. The house was built by Victorian engineer and industrialist William Armstrong, who was later given the title of Baron Armstrong. It was the first home to be lit by hydro electricity and William Armstrong was a true ‘early adopter’ installing an hydraulic lift, dumb waiter, dishwasher and other electrically operated gizmos as well as the famed lighting. Around the grounds you can see the way in which he harnessed the water to power the house and later added steam engines to supplement the power. I thought the house externally was a rather ugly Victorian mock Tudor manse, but inside there was a wealth of over the top Victorian details, massive marble inglenook fireplaces and substantial amounts of arts and crafts wood panelling, tiling and stained glass. It was all rather ostentatious, but this was offset by the interesting ‘downstairs’ rooms and the engineering details. I loved it. 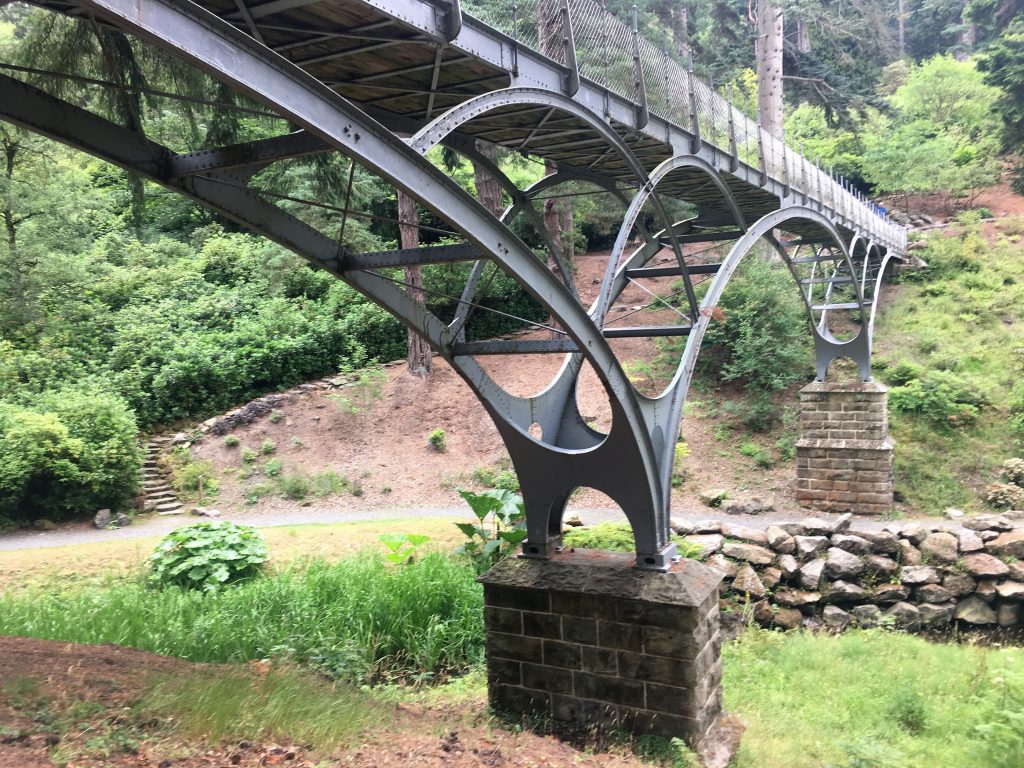 The Iron Bridge over the stream at Cragside 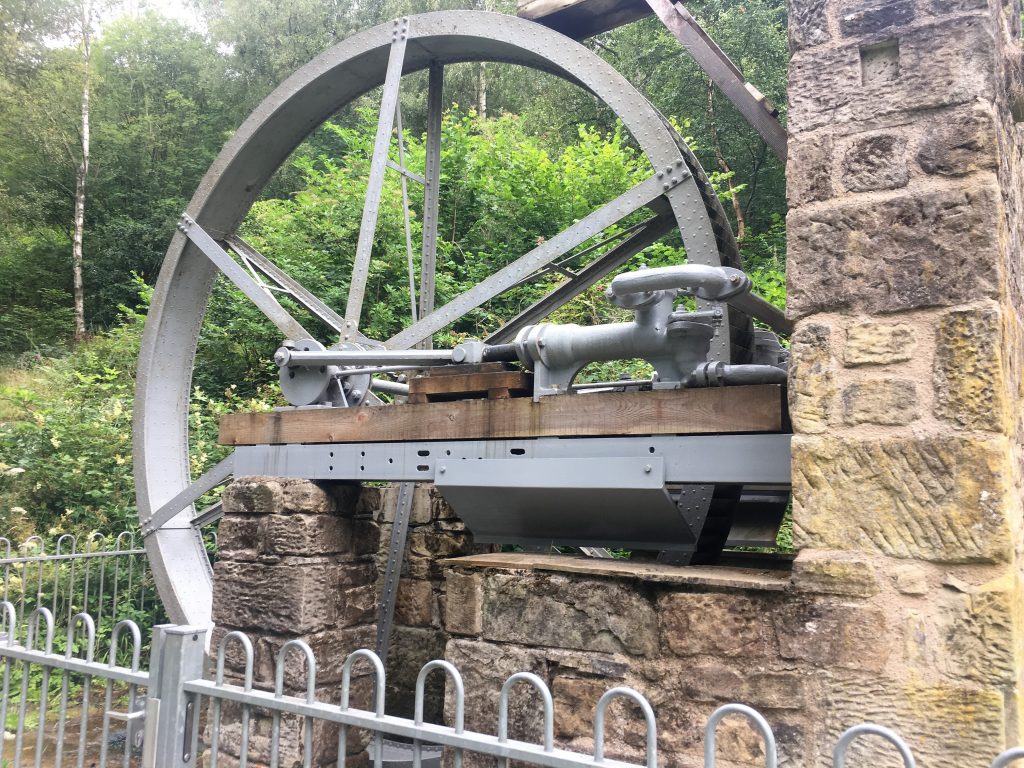 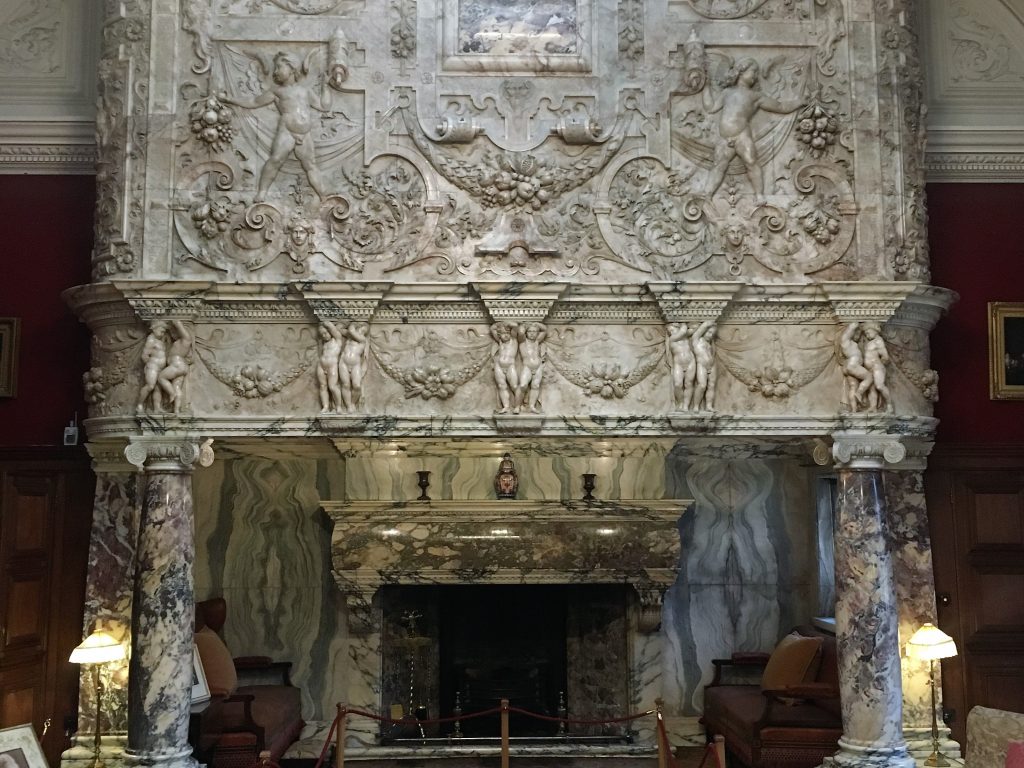 Truly enormous inglenook fireplace – the internal dimensions of the ‘nook’ are not much smaller than our van!

We spent plenty of time with Aaron and Katie over the weekend, including a visit to RAF Boulmer for Family Day. This gave us the opportunity to see how they live on base; it’s very like student accommodation with a room each, shared bathrooms but no kitchen to speak of (the expectation is that they eat in the mess). They cant wait to get into a house and I cant blame them. Sadly we had to say goodbye on the Sunday evening, but we’ll be seeing them soon when they come down for Nans 90th birthday celebrations.

We managed to drive back down to Taunton in one hit on the Monday, it was a long day but we took it easy with plenty of stops and eight hours later we were back.